When it comes to Duck Shooting, Jacana Lodge is the place to go. Jacana Lodge is located in Lincoln, in the province of Buenos Aires, 300 Kilometers (185 miles) northwest from Buenos Aires City. Lincoln was chosen as a destination because of its large numbers of ducks. More than you’ll find at any one lodge in North America. Populations are so prolific due to several factors, including proximity to migratory routes, expectational habitat, and limited pressure on the resource.

There are 13 common Duck species in the area around Jacana Lodge, also known as the central lowlands, or wet pampas. Most whistle except for the Pochard which purrs or burrs like the Canvasback. The shooting season for these Ducks runs from May-July in Argentina. 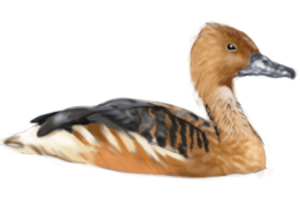 The Fulvous Whistling-Duck is one of the most widespread waterfowl species in the world. It breeds across tropical regions such as Central and South America and north to the Gulf Coast of the U.S.

Although they are common, they are also considered wary. They are largely resident, apart from local movements, but vagrancy has occurred to southern Europe.

Habitat includes freshwater lakes, paddy fields, and reservoirs with plentiful vegetation, where they feed nocturnally on seeds and other plant parts. 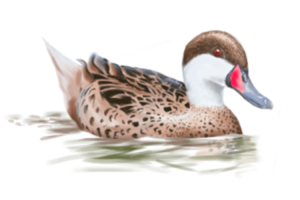 The White Cheeked Pintail or Bahama Pintail (Anas bahamensis) is a dabbling duck of the Caribbean, South America, and the Galápagos Islands. This is the court jester of South American ducks, with a bright, showy costume.

Their overall colour is cinnamon, but the body features a creamy white trim that extends from low on the throat to the base of a red bill, all edged in turquoise iridescence. Wings are blackish, with a green speculum that contrasts with the red bill. 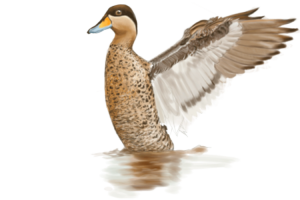 The Silver Teal’s range includes southern Bolivia, southern Brazil, Paraguay, Argentina, Chile, Uruguay, South Georgia, South Sandwich Islands, and the Falkland Islands. The southernmost birds migrate to southern Brazil in the winter. Silver Teals are generally placid ducks but are protective of eggs, their young, and females. They have a black cap that extends below the eyes, and a bluish bill with a yellow tip. They also have a green speculum with a white border. 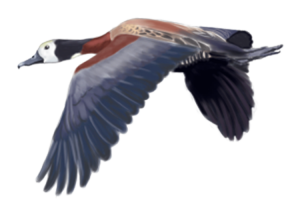 The White-faced Whistling Duck breeds in sub-Saharan Africa and much of South America. This species is gregarious and, at favoured sites, flocks of a thousand or more birds show at dawn and are an impressive sight.

As the name implies, these are noisy birds with a clear three-note whistle. These ducks have long grey bills, long heads, and longish legs. They have white faces and crowns, and black rear heads.

The back and wings are dark brown to black, and the underparts are black—although the flanks have fine white barring. 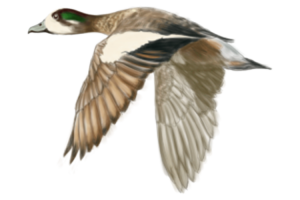 The Wigeon is one of three species of wigeon in the dabbling duck genus Anas. Unlike other wigeons, the sexes appear similar (although drakes are slightly brighter) and pairs are monogamous. This bird has a metallic green head and a grey bill with a black tip.

Its breast is barred black-and-white and its sides are orange-brown. It has white cheeks, a white forehead, and white on its wings. These ducks are found in southern South America on freshwater lakes, marshes, lagoons, and slow-flowing rivers.

They breed in the Falkland Islands, Argentina, Uruguay, and Chile, and migrate to south-eastern Brazil for winter. 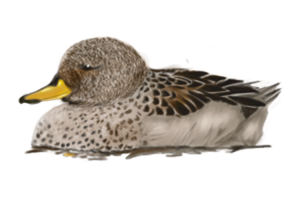 Similar to other teal, Speckled Teals belong to the diverse genus Anas. More precisely, they are one of the “true” teals of subgenus Nettion. Their DNA sequence is similar to the Green-winged Teal—although the two species share little outward resemblance. 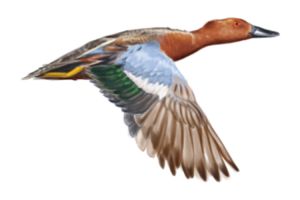 The Cinnamon Teal is a small reddish dabbling duck found in the marshes and ponds of western North and South America. Adult males have a cinnamon-red head, a brown back, red eyes, and a dark bill. Adult females have mottled brown bodies, a pale brown head, brown eyes, and a grey bill.

They are similar in appearance to female Blue-winged Teals; however, their overall colour is richer, and the lore spot, eye line, and eye-ring are less distinct. Their bill is also longer and flatter. Male juveniles resemble female Cinnamon or Blue-winged teals, but their eyes are red. These dabbling ducks survive on plants, although their diet may include molluscs and aquatic insects. 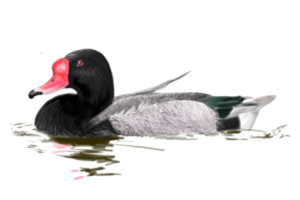 The Rosy-billed Pochard comes from the species peposaca—derived from a Guaraní word for “showy wings.” The wings feature a broad white stripe that is only visible when stretched out. Male ducks have a distinctive red bill, while the female is slate-coloured. Though classified as a diving duck, this pochard feeds more like a dabbling duck.

The Rosy-bill is genetically linked to the Canvasback and the females of both species are virtually identical. The drakes are adorned in shades of black and white, with a flaming red bill featuring a fleshy knob at the base. The Rosy-billed Pochard is endemic to South America.

The population in southern Argentina migrates northward during the austral winter, reaching Brazil and southern Bolivia. It is a vagrant to the Falkland Islands. 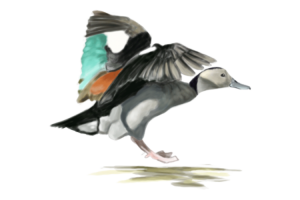 The Ringed Teal is a small duck found in South American forests. It is the only species of the genus Callonetta and may be closer to shelducks and belong to the subfamily Tadorninae. Males and females remain colourful throughout the year, lacking an eclipse plumage.

The drake has a rich chestnut back, pale grey flanks, and a salmon-coloured breast with black speckles. A black band runs from the top of its head down to the nape. Females have an olive-brownish back with the head blotched and striated in white, with pencilled barring on a pale chest and belly.

Both have dark tails, a contrasting pale rump, and a distinctive white patch on the wing. Bills are grey and legs and feet are pink in both sexes. Pairs easily bond. Their calls are a cat-like “meowing” in ducks, a lingering “peewoo” in drakes. 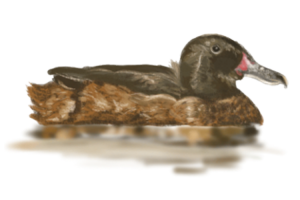 The Black-headed Duck of South America resembles a typical diving duck—the product of convergent evolution in the ancestors of the stiff tailed ducks. Males have blackheads and mantles and paler flanks and bellies. Females are pale brown overall.

They inhabit swamps, lakes, and marshes, and dabble on water plants and insects. The females lay eggs in the nests of other birds, earning them the nickname “Cuckoo Duck.” Hosts include the Rosy-billed Pochard, as well as other ducks, coots, gulls, and birds of prey. 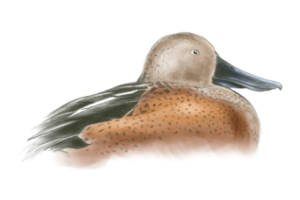 In winter the southernmost birds migrate north to Brazil and Peru. The Red Shoveler is cinnamon in colour with dark spots and a green speculum. The head and neck are greyish. They have a large dark spatula-shaped bill. 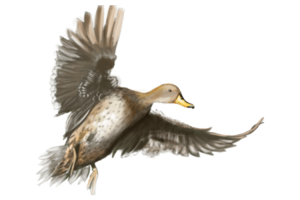 The Yellow-billed Pintail has a brown head and neck. Their bills are yellow with a black tip and black stripe down the middle. The tail is brownish and pointed. The upper wing is greyish-brown, and the secondaries are blackish-green.

The rest of the body is buffish-brown, with varying size black spots. The species is sometimes confused with Speckled Teal, but can be differentiated by yellow stripes on the bill and its larger size. Females hide their nests in vegetation close to water, and lay 4 to 10 eggs in a clutch. 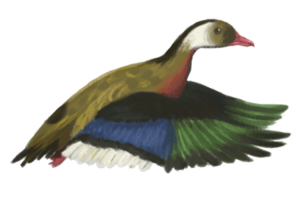 The Brazilian Teal or Brazilian Duck is the only duck in the genus Amazonetta. It was formerly considered a perching duck. Drakes can be distinguished from females by their red beaks and legs, and the distinctive pale grey area on the side of the head and neck.

Female limbs are much duller in colour. Brazilian Teal live in pairs or in small groups of up to 20 birds. Both parents look after their hatchlings and they can be found throughout eastern South America. 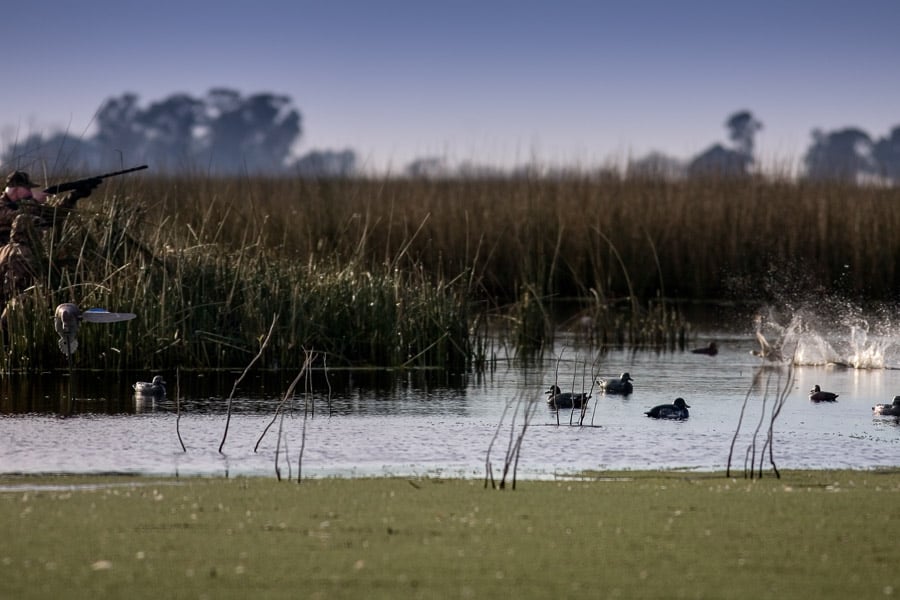 At Jacana, it’s not just duck hunting—it is the best-decoyed waterfowling you’ll find anywhere, launched from an elegant lodge that lends comfort and character to the whole experience. Jacana sits amidst Argentina’s migratory crossroads, where birds from the north pause on their migration south, but also where birds that migrate north from Southern Argentina stop to overwinter.

Decoys will be out and ready for the hunters’ arrival. Hunters are then placed in double dry blinds, or large dry, sunken “buckets” (similar to an individual pit blind), or on platform pallet blinds. The idea is that every hunter will get in a blind that’s dry and offers good footing, leading to a comfortable outing.

Hunting over decoys starts at first light and continues until 10 a.m. or later. Most days, duck hunters return to the lodge for lunch and a siesta before afternoon departures at about 3 p.m. for evening duck hunts. Evening hunts are often conducted within the confines of the lodge property, so drives are generally shorter. They last until dark when guests return to the lodge for drinks and dinner.