The sea fishing season in Norway is nearing the end of its year but the camp at Havoysund is still fishing well despite the weather taking a turn for the worse. Here we have a great report in from the guides at the camp who despite the weather being extremely tough for the week have been able to get out and find some fantastic fishing with some great Halibut being caught.

We can now look forward to the last week of the season after an absolutely fantastic week with many big fish and happy guests. The week started with fantastic weather and we had three really magical days, but now after the weekend the weather gods have been hard on us and made it a little tough, but despite this big fish have come up. On Monday we had strong winds from the east and in connection with the flood tide that made the current in the water very hard and the waves have been very large. Monday became a day in the immediate vicinity of the camp, for some this resulted in good fish such as boat 12 which managed to smash up a real good four at 150 cm (103lb est). 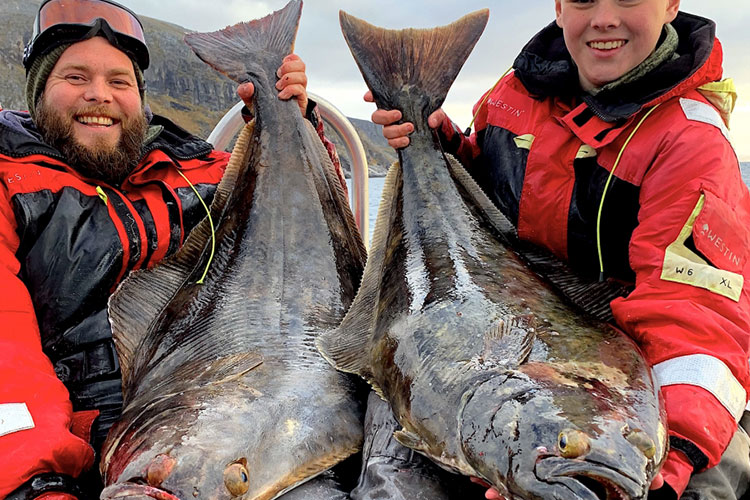 In the guide boat we drove to a really nice area near the camp in the afternoon where it was great to fish despite the current and wind crashing at its worst. After a tough day it felt really good when Marcos rod turned out like a U and started to run like never before. With a really good weight on the take right away it felt like a good fish but unfortunately it did not take long before the press got a little too hard on the rod and the line… it felt really heavy obviously but when it is a big fish of that caliber, there are sometimes small margins and we had to continue war and look ahead. 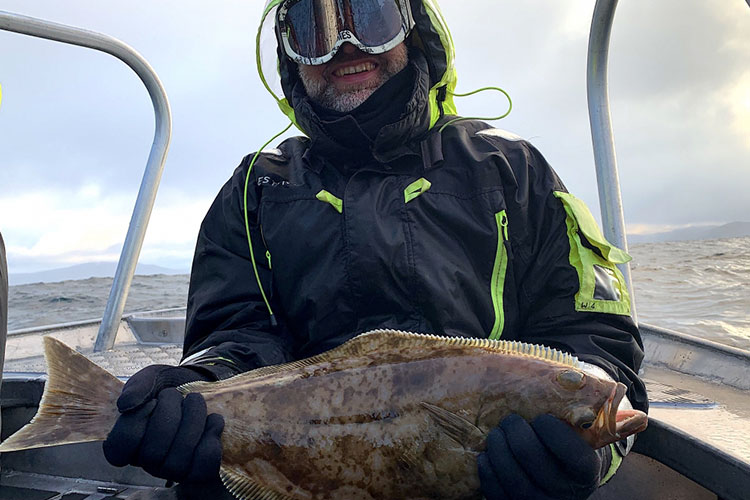 During the night to Tuesday, a real wind swirled with winds up to 20 m/s and during the day the wind continued with average winds of 17-18 m/s so the fishing was blown off and guests had a rest day on land and charge the batteries for Wednesday. So yesterday on the last fishing day the weather was still quite tough but still quite fishable and some who found just right were boat Alexander and the gang in boat 4 who immediately got a little Halibut and decided to test some more on the drift to see if the parents of the big fish were home and you could say that they were. 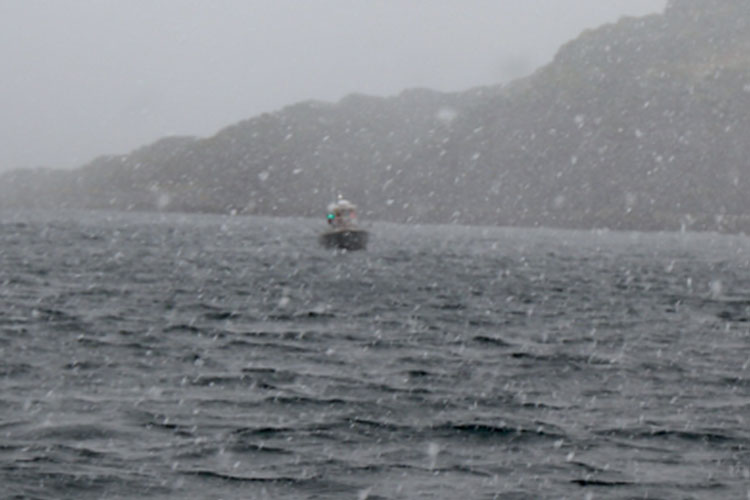 Alex son Liam who was here for the first time and had a little trouble with the fishing earlier this week, grabbed a real hold of the javelin and got a good round and managed to burn up his life’s first flounder at an amazing 130 cm (65lb est)!! Big congratulations to Liam and we hope the Halibut fever sits for a long time. Not long after that the next rod slammed over and Stefan took a turn, after a steady beating he felt it was a serious fish and a heavy fight followed and thus Pallmqvist finally managed to inflate his life’s biggest fish on magic in full blizzard 157cm (119lb est) ! Big congratulations, the fishing continued and they managed to land another couple of nice fish. 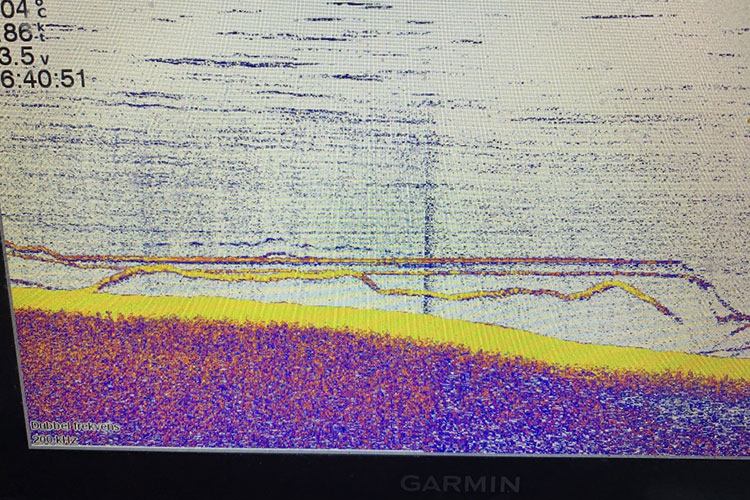 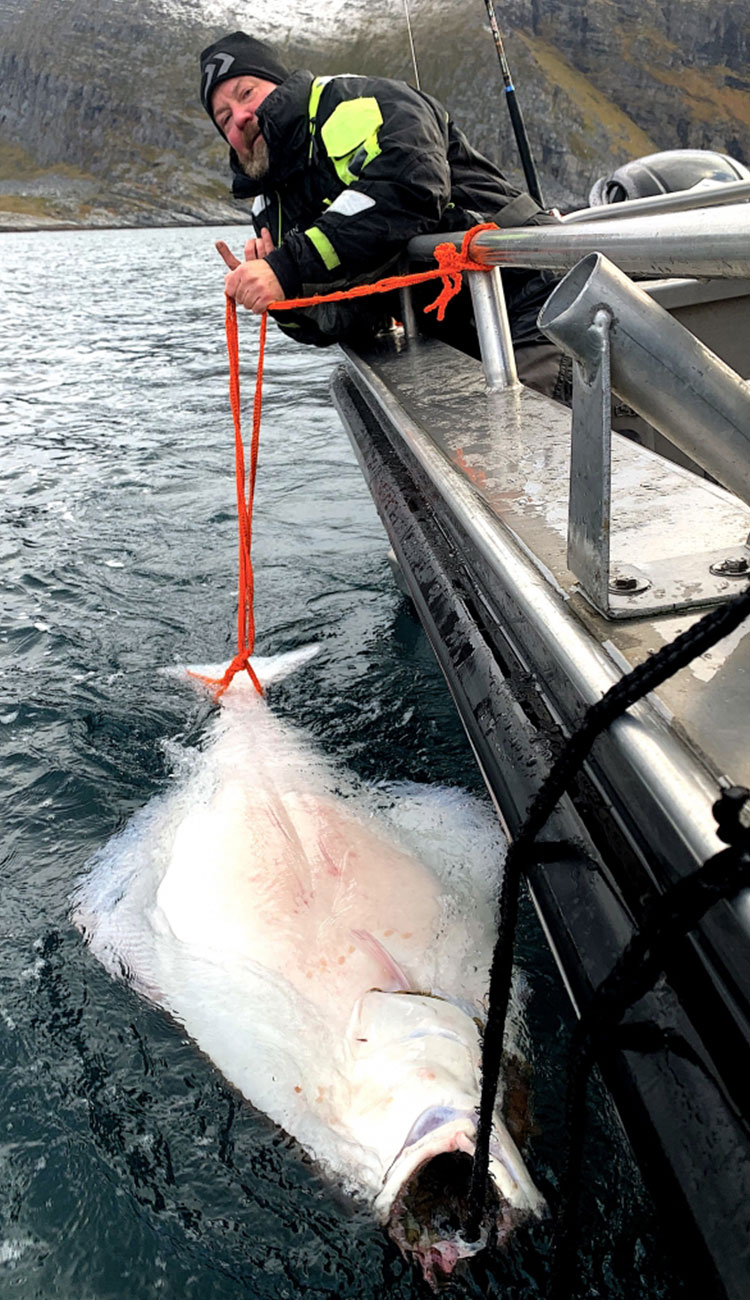 Thank you for the great report guys, it seems that Havoysund will continue to fish all the way to the very end of the season this year.

If Havoysund is somewhere that you would like to fish, feel free to visit our tour page. If you would like to know any more details or have any questions regarding the destination, then please get in contact with our sea fishing team in the office by calling 01603 407596.