Warning: This Article Can Cause Addiction! Alaskan Rainbow Trout with ATA Lodge Bristol Bay on the Alagnak River!

MAKE SURE YOU CHECK OUT OUR SPECIAL OFFERS ON THE FIRST 2 WEEKS OF JUNE. WE ARE GIVING A £1,500 DISCOUNT OF THE ADVERTISED PRICE PER PERSON. SO BE VERY QUICK. 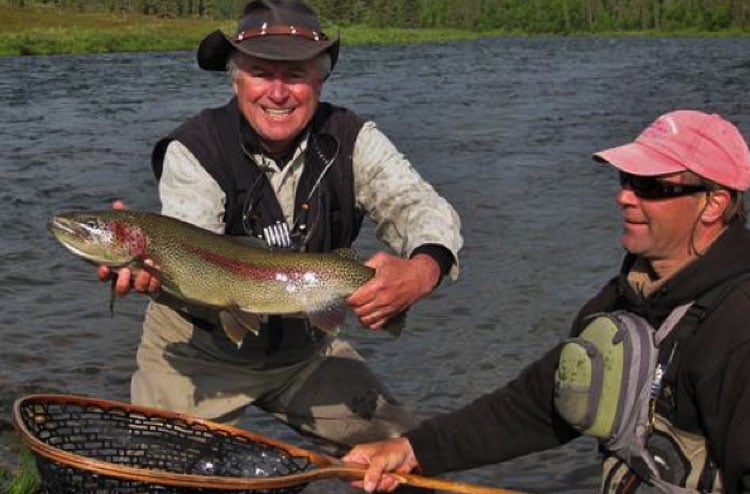 Those that seek them are passionate about catching them!  For those “in the know” about what Alaska’s Bristol Bay Region has to offer, you could say that trout fishing is more like an obsession than a mere passion for these aficionados (or should we say aFISHionados)!  They have discovered that there is no better place on Earth to pursue their quarry than the crystal-clear rivers that flow out of the Katmai National Park, in Southwest Alaska where ATA Lodge is located. 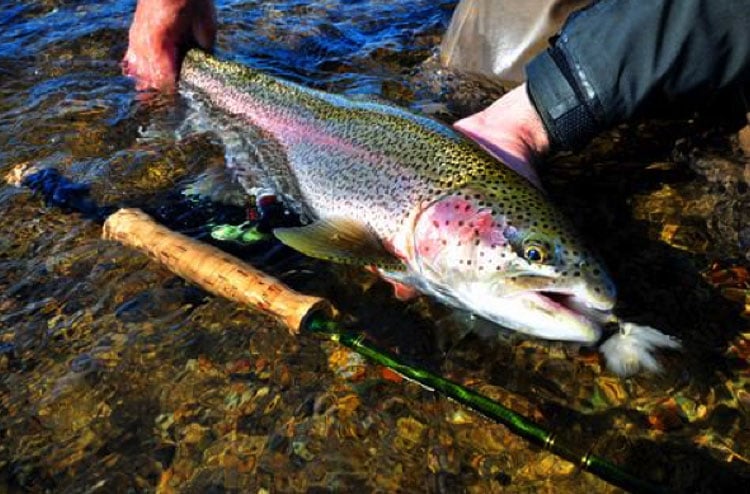 AND WHY DO THESE FLY FISHING ENTHUSIASTS GET SO FANATICAL ABOUT CATCHING THE TROUT OF THE KATMAI?

Well it’s quite simple really, it’s because they are more numerous, get bigger and fight harder here than almost anywhere else.  Native and wild to our region, they spend their entire life cycle growing strong in the currents of the fast flowing Alagnak River.  Also, these fish have a very short window of opportunity when food is available in large amounts.  So the time between ice out and the next freeze is when they have to pack on as many calories as possible.  That means they are aggressive and insatiable, eager to strike either surface or sub surface food sources. 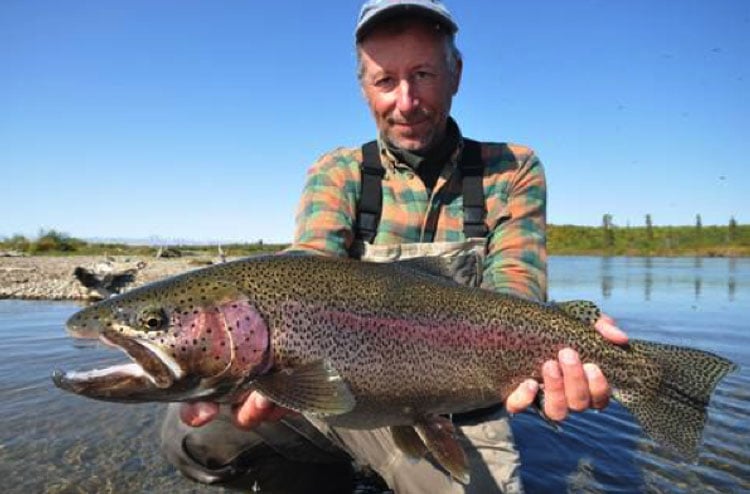 THERE IS OF COURSE THE THRILL OF FEELING THE INITIAL “TAKE” OF A WELL PRESENTED FLY THAT IS ANOTHER REASON ANGLERS ENJOY TARGETING THESE TROUT.

That take is immediately followed by a series of explosive, line stripping runs and acrobatic leaps that literally causes grown men to “whoop” with excitement.  It is euphoric and addictive.  You could say that the “tug is the drug” they seek.  It is the reason these privileged anglers come back year after year.  There are few other places on the planet that can provide that kind of “high”. 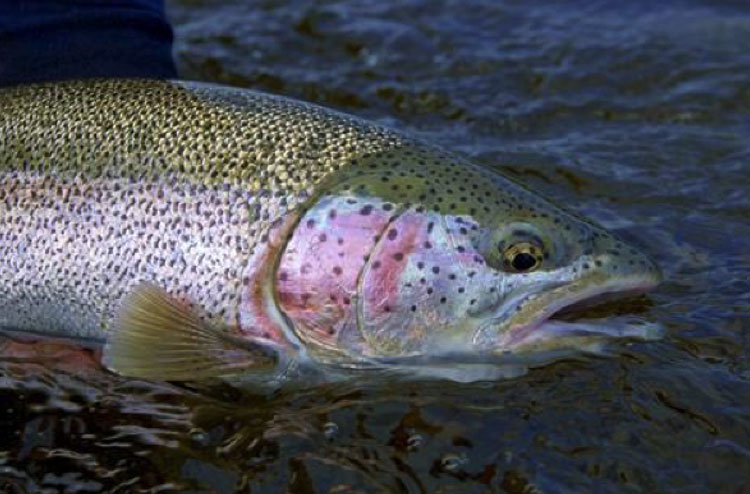 It is not only the fact that these voracious trout fight so hard and leap so much that thrills our anglers; but they happen to be the most beautiful rainbow trout on the planet as well.  The Alagnak is home to variety of trout known to us as Leopard Rainbow Trout.  They are called such because of the fact that they are extra-heavily spotted.

On the Alagnak River rainbows put on over 20% of their weight during the summer because of the abundance of food.  The river is rich in salmon fry, eggs and the flesh from spawned-out salmon carcasses.  When you catch one of our older and larger rainbows, you may be tempted to say, “look at the shoulders on that fish.”  This is in reference to the large girth of the body of the fish in proportion to its head size during seasons when food is available in abundance.  Although our average fish may be around 18 inches in size, many fish are caught up to and over 25 inches; and in some cases they will reach behemoth proportions in excess of 30 inches in length. 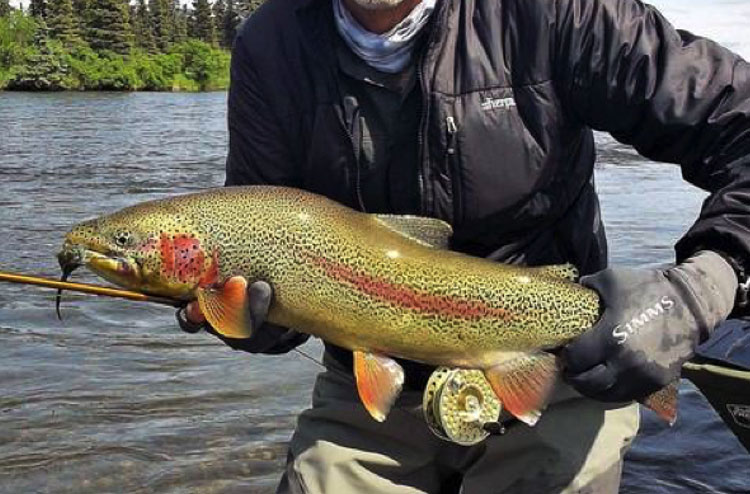 WHILE A 6 WEIGHT ROD MAY SUIT TROUT FISHING IN THE LOWER 48, IT IS TOO SMALL FOR THE LARGER FISH YOU WILL ENCOUNTER IN BRISTOL BAY.

Therefore we recommend a 7 weight fly rod as these fish are heavy and currents can be strong requiring heavier rods and tackle.  Weight forward lines are preferred as some of our water is large and a longer cast can be of benefit.  A sinking tip line will come in handy as well as a floating line which you will also need.  When fishing for rainbows on the Alagnak River you will encounter diverse situations as it is a braided river, known by locals as the Branch River for its many channels and streams of varying size, depth and water conditions.

Many traditional methods and flies that work “back home” will work in Alaska as well.  As the river has diverse and abundant insect life with hatches happening all season long.  The exception to that rule is the large rainbows that are found here.   These fish are carnivores and they thrive on what the salmon runs produce for them.  And as we get the largest runs of pacific salmon in the world in Bristol Bay, that food source is abundant during the summer when the Alagnak is a rich source of salmon eggs, alevins, fry and smolt, not to mention all the rotting flesh of the salmon which die after spawning.  They also feed on sculpins, leeches and even mice that sometimes fall into the river from the vegetation along the shoreline.  So depending on the time of year, our trout will be focusing on one or more of these different sources of food.  Fishermen will need the “match the hatch” and those who come up with imitations of the appropriate type of food that the fish are concentrating on in the moment, will have the best success. 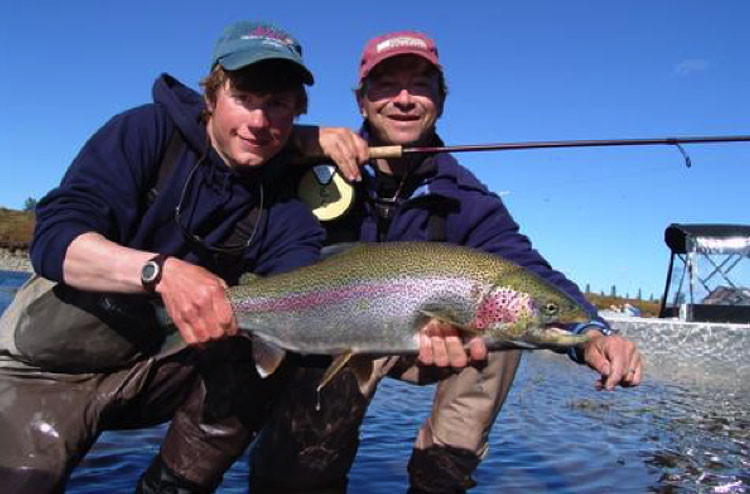 In June, right after the trout have finished spawning and before the salmon arrive, dry fly fishing is very effective, matching insect hatches that are happening on the river.  This is also a great time to try out a mouse pattern skated across the surface of the river.

THERE IS NOTHING MORE EXCITING THAN SEEING A BIG LEOPARD RAINBOW TROUT ATTACK A MOUSE IMITATION ON TOP OF THE WATER! 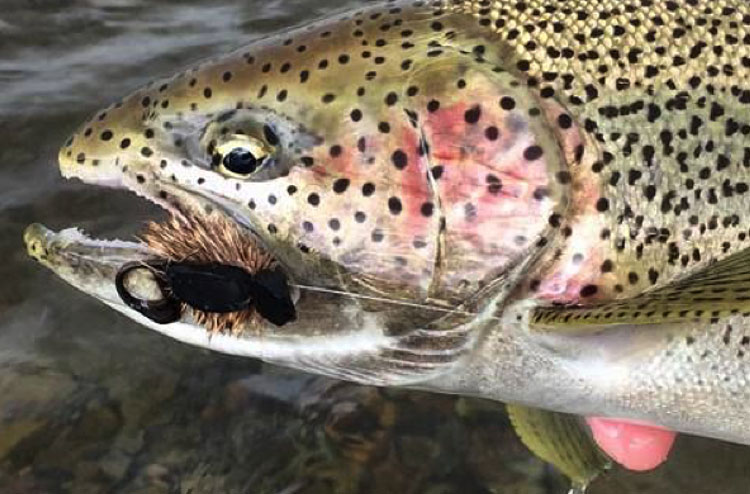 This is also the beginning of the smolt out migration when the young salmon, born in the river, migrate out to sea for the first time.  June is a time when leeches in the river are spawning as well.  So switching over from surface flies to smolt patterns and big leech streamers are another great way to catch a lot of trout.   These fish are not leader shy, and can be extremely aggressive – so you may want to go up in tippet size to ensure these brutes don’t break you off,

Once the salmon arrive and start to spawn tactics will change from swinging steamers and casting dry flies to drifting beads and egg imitations along the bottom of the river.  This is a sure fire way to catch trout once the salmon have started to drop their eggs.  The later in the season after the salmon start to die and rot, we will switch again to swinging streamers that imitate the rotting flesh of the decaying salmon. 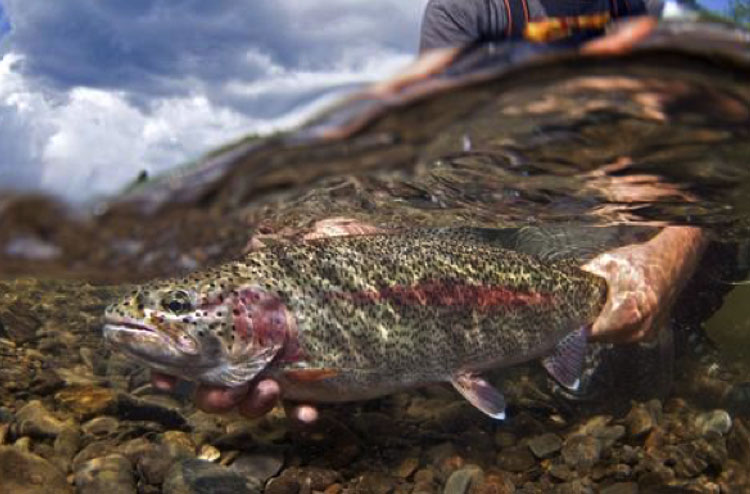 ATA Lodge is an ideal place to come and experience the type of fishing described in this article.  It is situated at mile 52 from Bristol Bay itself along the banks of the fabled Alagnak Wild and Scenic River.  The Alagnak River is made up of our Norther and Southern tributaries.

The Upper Alagnak flows out of Kukaklek Lake 29 miles above our camp which is joined by the Nonvianuk River which flows out of a lake of the same name 20 miles upstream of us.  These two twin lakes are true jewels in the Katmai National Park and Preserve.  The confluence of these two rivers is only 6 miles above ATA Lodge.  So in effect we have over 100 miles of 3 rivers within easy jet boat access to the lodge which we have to choose from.  This means that we don’t have to depend upon expensive “fly outs” to keep our clients happy and in to lots of fish.  Located at the top of the the Alagnak’s famous “Braids”, where every mile of river represents perhaps 2-3 miles of fishable channels, we have well over 100 miles of accessible water to explore – ensuring that you will rarely see another fisherman and experience a truly wild and remote Alaska that few have the privilege to fish. There is none of the “combat fishing” that fishermen to many other parts of the state have to endure.

And if that weren’t enough, there are even more rivers and streams that you could visit during your stay.  The headwaters and tributaries of the Alagnak River System begin their journey to the sea in the Aleutian Mountain Range which is visible from the Lodge.  These head waters are home to some other famous trout fishing waters of the Katmai – names the initiated will recognize immediately like Moraine, Funnel, Battle, American, Kulik – names of rivers that fill a trout fisherman’s dreams at night.  Fly outs to these as well as “big trout” rivers like the Naknak and Kiviak are only short flights away.  So as you sit and read this article, whether on your computer at home or while day dreaming back at the office, I know you already have a smile on your face and have had to wipe the saliva from your mouth just thinking about when your next trip to this trout fisherman’s paradise will be – and to be honest, whenever that is, it can’t come quickly enough!

SO WHEN IT THE BEST TIME TO COME?

FOR THE TROUT FISHING PURIST, WE SUGGEST COMING ANY TIME FROM JUNE 8 WHEN THE RIVER OPENS THROUGH TO THE END OF THE MONTH.

As mentioned above, this is a great time for dry fly fishing and using Mouse patterns on the surface, as well as swinging articulated leech and sculpin streamers.  The fish haven’t been fished in 8 months at that time so are not shy.  They have just finished spawning and are ravenously hungry as the salmon haven’t arrived yet to start dropping eggs.  This is also a time of the year we offer our price as well, which makes these weeks among the most affordable anywhere in Alaska for the quality of fishing and experience you will have.

MAKE SURE YOU CHECK OUT OUR SPECIAL OFFERS ON THE FIRST 2 WEEKS OF JUNE. WE ARE GIVING A £1,500 DISCOUNT OF THE ADVERTISED PRICE PER PERSON. SO BE VERY QUICK.