Sometimes on a trip everything just comes together and no matter how many times you have been fishing there are still surpizes out there to keep thrilling us all. Our last group of customers had just such an encounter.

Everyone was on the boat by 7 for day 1 and they our customers were rewarded with 15 GTs for their first day… not a bad start and the perfect way to warm up the arms.

Day 2 also brought GTs to customer’s poppers and the weather too seemed to favour the anglers. A couple of huge GTs made away with poppers before the day ended. You could say just another day in paradise.

The fishing area in the Andaman Islands is huge and even though we have fished here for many years we are constantly searching for new fishing spots and for our customers on day 3 our searching paid off. After trolling for twenty minutes on day three over a new spot that we had found over pinnacles a huge blue marlin slammed the lure and was hooked. After some spectacular leaps and long runs Bill had his task cut out, recovering a couple hundred yards of line before he handed the rod over to Shane to complete the fight. The huge blue fought for an hour before he was alongside the boat being measured. The tape indicated 3.3 metres in length and the fish’s weight was calculated to be 305 kilos. Then to round things off the days fishing ended with a couple of GTs.

Day 4 and it was excellent weather and while we proceeded to a new spot we saw a lot of activity on the surface that looked promising for marlin. Pods of dolphin, bonito and occasional big tuna were visible and the day looked great. We began to troll between and around the pinnacles and after a while we noticed the lure had picked up some seaweed and needed to be reeled in. That’s when the marlin decided to strike barely 15 metres from the boat. That right there was a moment that our customers will never as all the commotion unfolded before their eyes.

First the bill came out of the water and then its huge eyes before the water exploded when the marlin hit the lure. It’s amazing to see the speed at which they move. Everyone witness to some crazy runs and leaps before the Marlin found the depths. Fifty minutes later they had brought him up to the surface and measured the fish. The tape showed him to be 2.5 metres in length and weight approximated at 200 kilos. So there you go two Marlin in two days and GT’s everywhere the customers fished.

Day 5 and the customers were keen to try another Marlin spot and landed a beauty of a sailfish, which after a short fight weighed in at 50 kilos. Bill managed to capture some excellent underwater footage of the fish coming in and being released.

The group’s last day of fishing didn’t prove any less spectacular with more than a 100 fish being hooked out of which 61 were landed, all mostly GTs.

The day was so filled with action that by afternoon the customers were all worn out and had to call it a day.

Do you want to experience fishing like this, you would be mad not to try it, but you will need a holiday afterwards to recover. To see the full trip details Click Here 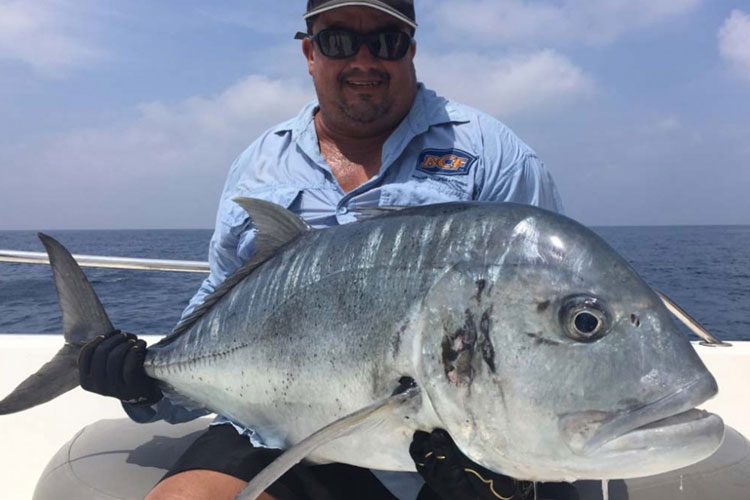 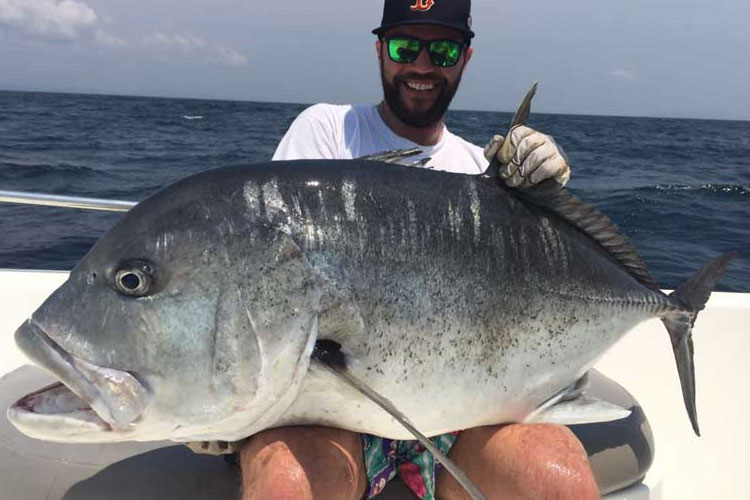 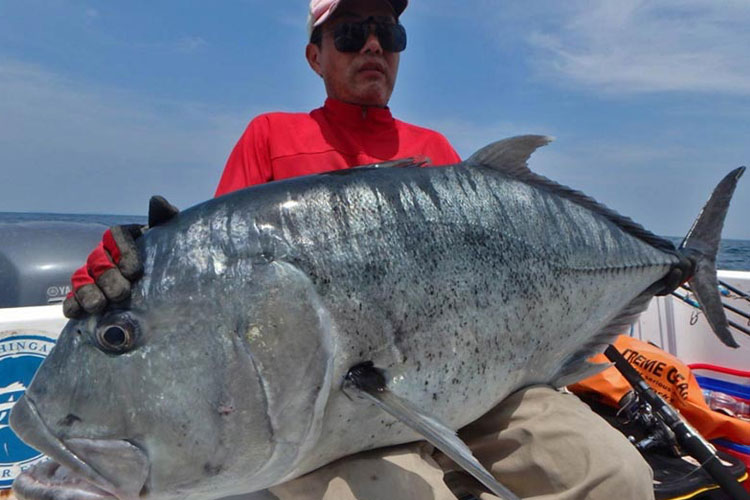