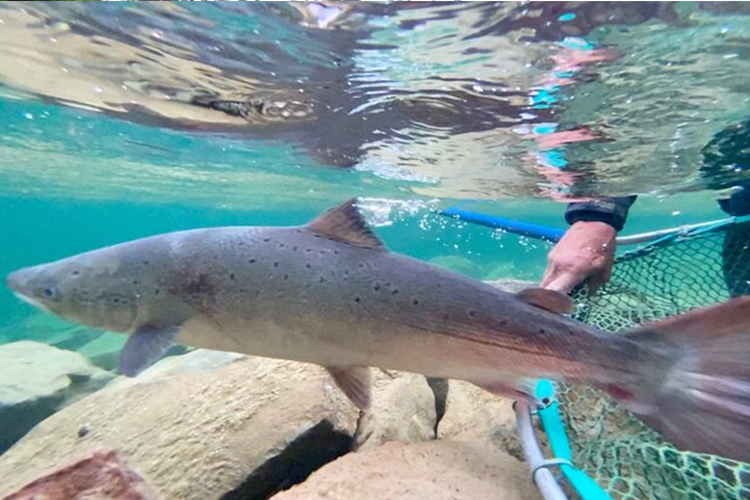 Its starting to feel like fish are trying to be caught at this point! This week saw HUGE halibut coming in all week!

We finally have guests again here in Havöysund after a week without any people at the camp.  Michal who was here many many times before had full control of where he wanted to fish and landed a cracker of a fish of 150 centimetres and one of 140 centimetres during the first hours. The first real fishing day started really windy so we chose to only go out for a few hours in the afternoon when the wind calmed down a bit, it resulted in a few smaller fish up to a little over the meter for us who went east, but for Michaloch and the gang who braved the wind and went west towards the wind to get down to a nice mark, managed to knock up several fish with a top of 140 centimetres.

Last Saturday the weather was really nice again and we left the harbour at 05:00, the fish hit right when we arrived and within half an hour a bunch of fish had been landed around the meter. After a while when the current started to turn it really really went off for one of the guests in the guide boat, the fish, unfortunately, rushed with extreme speed straight under the boat and the line came against the boat edge and the line snapped… But it only took a change in drift and it resulted in two fine fish of 132 and 120 centimetres and the drift after that a fine 138-centimetre Halibut appeared. The Dutch in boat 3 who were at the place were still waiting for their first bite, when they were just about to crank up and change the drift, it stopped in one of the rods and they could land their first super nice fish for the day at 166 centimetres! The same boat also managed later in the day to smack a really nice fish of 155 centimetres! Uffe, who helped guide a group of Lithuanians landed them also at 166 centimetres on the last drift of the day. Michal, who continued to deliver, slammed up a large queen of 170 centimetres.

Today it has blown a gail again, but in the afternoon it calmed down so we went for Plaice. Plaice fishing was magically good and we landed somewhere between 30-40 Plaice on two boats, many of which were over 50 centimetres with a top fish that was very fat and 59 centimetres long. The Dutch targeted Halibut again and lay down on a nice edge I pointed out to them a bit outside the wooded bay, after only a couple of minutes of fishing they pulled one at 132, soon thereafter one at 142 and finished with a real monster of 181 centimetres!

Absolutely magical, now we charge the batteries for the coming days and hope the fishing continues in world-class!

If you would like to reserve a weeks fishing at Havoysund for either 2021 or 2022 then get in touch on 01603 407596 and for a small deposit we can book your next fishing adventure of a lifetime.