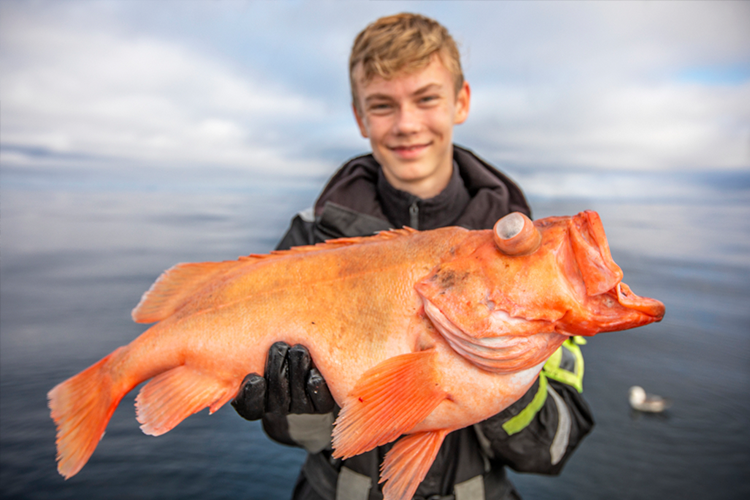 Deep sea fishing in Havöysund with an unusual watcher!

Its starting to feel like fish are trying to be caught at this point! This week saw HUGE halibut coming in all week!

Jimmy, Isak (Jimmy’s son) and I were on a quick visit to Havöysund and of course it itched in the fingers, not only because of the fishing but also to be able to squeeze, feel, steer and drive the new guide boat that now adorns Havöysund harbour as the fastest sport fishing boat the small community has seen. The weather forecast was almost too good to be true, during our two days in place the wind would barely exceed 3 meters per second and the sun would creep forward from time to time which made the choice easy. We were going to go deep!

We set course early in the morning towards the open sea and already outside the first sea mark when Jimmy put the boat at cruising speed and closed the doors to the cabin we started laughing .. The knob meter showed 26 knots but it felt like we were standing still. The boat went so smoothly it was almost completely silent. Throughout the trip we could talk in a normal conversational tone, sit back in the gas-damped chairs, drink coffee, listen to music and just enjoy the ride. We stopped a bit quickly and picked bait fish before we set course for a new fishing spot for both of us which would hopefully hold big redfish. The journey there went over an oily water surface and we were met by a fairly strong current in place which made it tricky with the drifts in the beginning.

The area was scanned and we tried around to find the right one when suddenly a huge vortex breaks the shiny water surface next to the boat and we all three looked at each other with eyes like saucers and birdhouses as mouths. After many years in Norway we have seen various different marine animals but a vortex like this I have never seen before and we stayed in the area to see what it was .. When we almost gave up and thought that whatever it was, it had disappeared, a “pssssshyy” was heard behind us ! Up comes a giant whale, probably closer to 15 meters and as wide as the boat over the back and with a body shape and fin placement that made us confused. Neither Jimmy nor I could put our finger on what the choice was, but the camera went hot and quickly a couple of hundred pictures had been snapped during the 10-15 minutes that the choices curiously circulated around the boat, sometimes as close as 15-20 meters from us. It was clearly observing us and seemed more curious than frightened by our presence. We do not know exactly what the choice is, but previous observations of blue whales have been made in the area and when we compare the pictures, it is frighteningly similar. Maybe one of you out there knows what the choice is based on the pictures? Feel free to email us in that case and tell us!

After this fantastic nature experience we continued fishing and now the current had slowed down a lot . A new drift was set up and immediately when we reached the bottom we got a triple cut and the rod bent heavily. No jerks, no jerks, just weight and first up was Isak who also took the biggest in this triple cut with a fantastic fine Redfish of 4.87 kg while Jimmy and I could haul a couple of fish in the 3-kg class over the railing. We quickly let go and got another fish around 3 kg before suddenly the current turned around and the activity became low again.
After a couple of drives, we chose to throw in the towel as other chores were waiting on land and steered the cow towards the harbor for a joint king crab dinner with the guides on site inside the hotel.

The next day we changed area but the goal was still set at Redfish. In this place, the cut dipped all the more often with a double cut on the same tackle on several occasions, but the worst was Isak again who pulled a triple on the same tackle! No wonder he moaned and groaned when he was about to crank up almost 300 meters .. In addition to about 20 Redfish in fine food size, we also got a long around 10-12 kg on a steep deep edge. We stopped fishing in the afternoon when we felt sore in the back and shoulders and steered the boat towards Havöysund again and on the way home saw a whale just outside the harbour, which meant that there were both Redfish and whales during both days!

You cant beat fishing for Redfish in Norway! We always love fishing deep as you never really know whats lurking down there! We also cant wait to get a go on the new Havoysund boats!