This week on Farquhar we welcome a group of 10 guests from the U.S to the atoll for the 7th and final week of the season. After a short flight from Mahe our guests were greeted by the Guide team and guesthouse staff and then shown to their accommodation. After settling in we got straight into it with a safety briefing and a tackle setup to ensure everyone was ready for a solid weeks fishing. This week on Farquhar we are into full moon spring tides making the tidal range huge. The large volumes of water being brought onto and off the atoll, ensures loads of cool water brought in from the ocean. With mid-morning low tides in the beginning of the week moving to midday lows gave our guests a chance to fish the drop as well as the push. High water in the afternoon gave our guests options to sample the rich diversity of species this atoll has to offer through targeting coral heads as well as looking for GTs by walking an island or sand spit, the chance to go dredging or sail fishing was also an option and proved to be worth it as on the last day 2 GTs were caught during a blue water session. 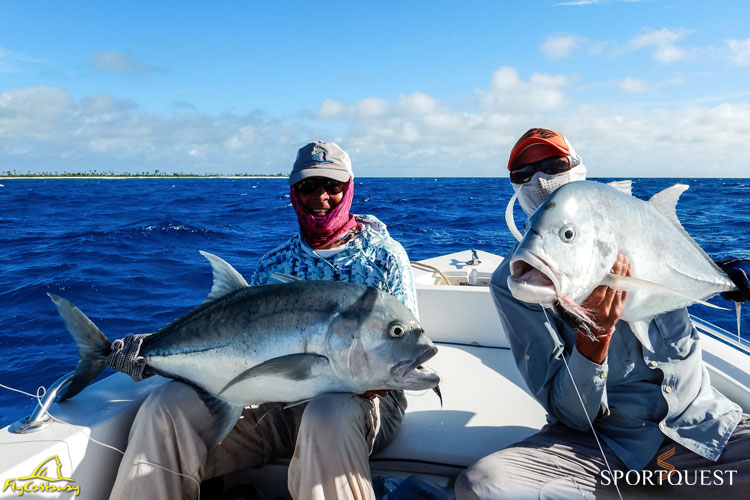 This week the GTs was around all over the atoll with twenty-eight being hooked and ten successfully coming to hand. The bumpies were also seen in solid numbers and our guests had opportunities to target these fish as they tailed in large pods with 12 bumpies hooked and but sadly none landed. It was a fantastic week for triggers as our guests got to see these beautiful fish tailing all over the atoll and made the most of it with 9 hooked and 5 landed. The bones were back on the flats and happy this week as the weather improved from last week and more cold water was brought onto the flats as all of our guests landed bones and some solid fish were landed around 65-70cm. 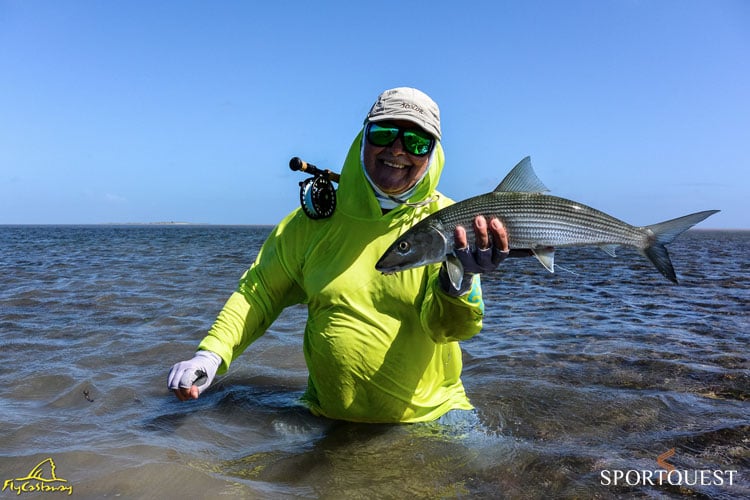 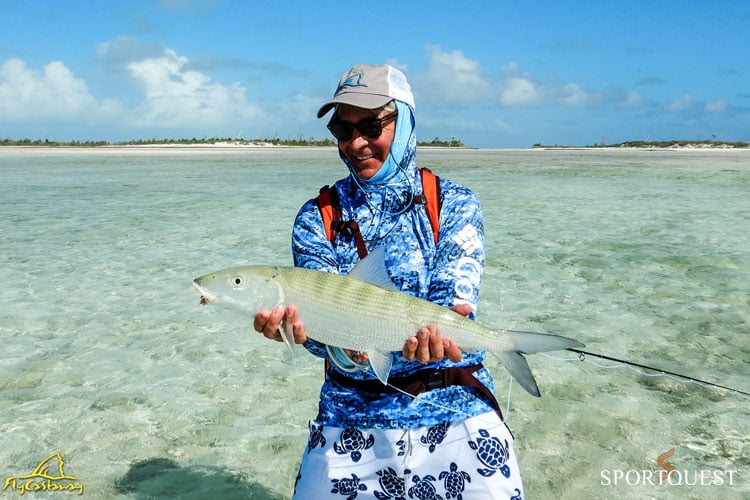 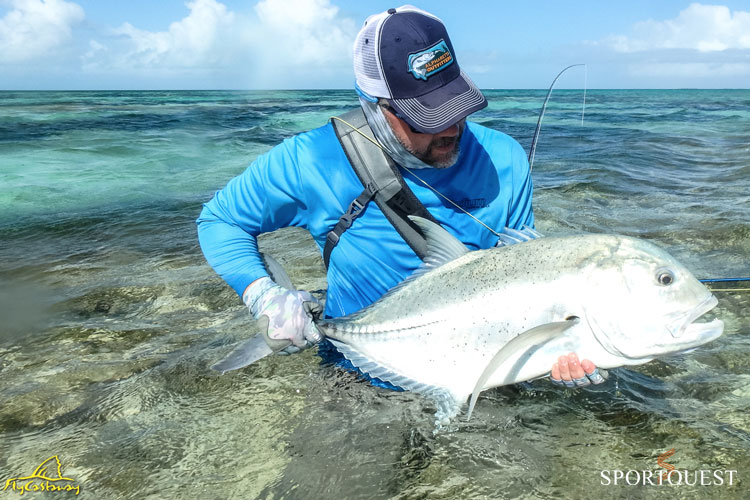 With the afternoon high water our guests drifted over coral heads and got to tussle with many reef dwelling fish as the species count for the week was really good. Father and son Jonathan and Thomas had a great week, which saw father Tom hook a massive GT on Day 1 only to lose it at the end of the fight as the fish cut him off. Thomas managed to land a Moustache triggerfish on the 4th day and son Jonathan managed to convert his shots landing 2 fish with the biggest being 104cm. Another Father and son pairing Stephan and Benjamin had a good week as they both hooked numerous GTs with son Benjamin loosing 3 in 1 day. First time salt water fly fishing John had a start to remember as he landed a 108cm GT on the first day of the week and went on to land another one. Erik was unlucky with the GTs this week, hooking a few but none coming to hand, but he enjoyed some great bone fishing with a few solid grouper and snapper species. Doug got his GT on the 3rd day landing a fin perfect fish. Terrel hooked 5 GTs before landing his 1st on fly! Fishing buddies Donald and Bill had a fantastic week, which saw Bill achieving a Trigger slam on the first day of the week – a Moustache triggerfish, a nice GT and a bonefish to top it off. It got even better for him as after losing 3 GTs in a day himself and Donald managed to double up on a pair of GTs in the deep blue during the final afternoon session. Donald had a great week as he also got a trigger slam – a yellow margin triggerfish, a nice GT and a bone. He also managed to cap off his week with another GT and a moustache triggerfish! 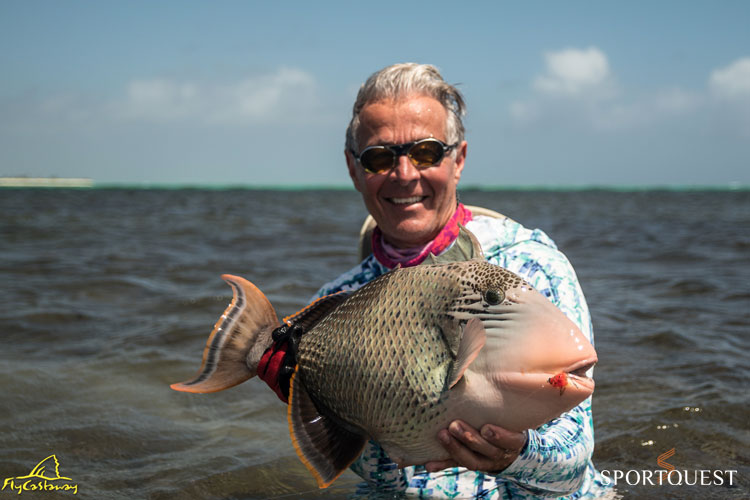 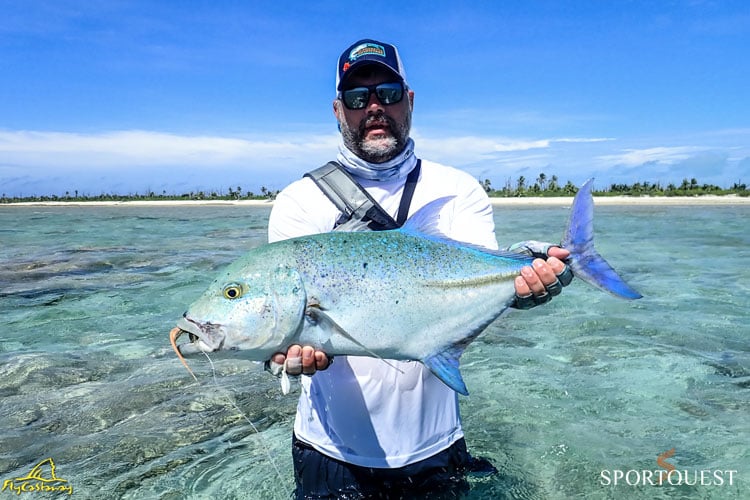 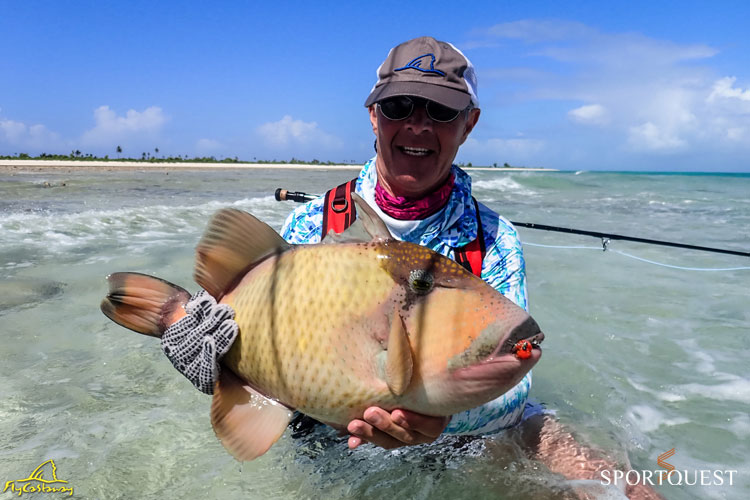 All our guests hooked Geets and got to experience their power and speed, there were bones caught by all as well as some solid Bluefin Trevally, grouper and snapper making the week a great one. The guest house and food were complimented by our guests as they are talking about returning to the island in the not too distant future.

Have you always fancied fishing one of the best flats in the world? Well now is your chance as we have a huge saving available – Click Here