As our season Atlantic Salmon Fishing on the Gaula River at our famous Winsnes Lodge has finished, we have been looking back over the season. Considering we had low water conditions for the majority of the season we have had one of our most successful seasons.

This is all down to Matt and his hard work in changing this fishery around, increasing the amount of water that can be fished and most importantly enforced mandatory rest periods for all pools. We all know that Atlantics thrive on neglect, so giving all pools a real rest period between fishing sessions, means our fish were more interested in customers flies.

“Throughout the season we had some amazing fish with plenty over 30lb. “

What about Lindsey Auckland who joined us to fish for Atlantic salmon on the Gaula, within five minutes of starting she hooked this huge bar of silver, estimated at 16.5 kilos (35lbs) on the Old Bridge Pool. After a few pictures the fish was released and swam away strongly! 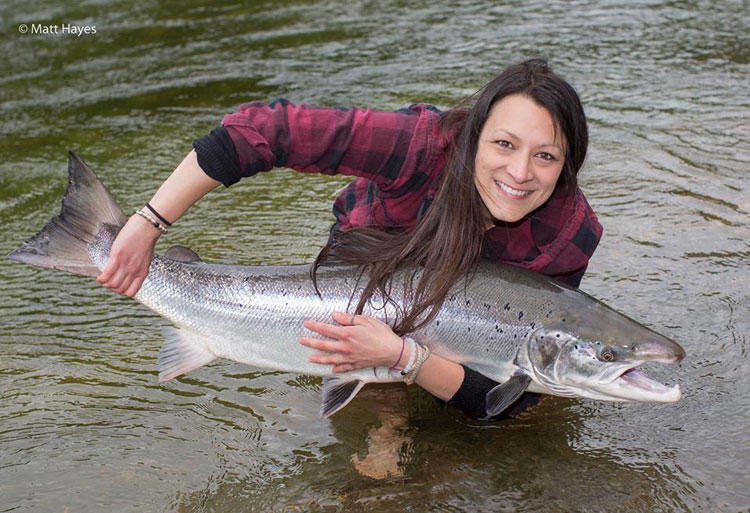 Even Matt himself found time to get in to the action with a 35lb Gaula salmon caught on our home pool, Kroken. The fish took a sunray shadow and was released in excellent condition. 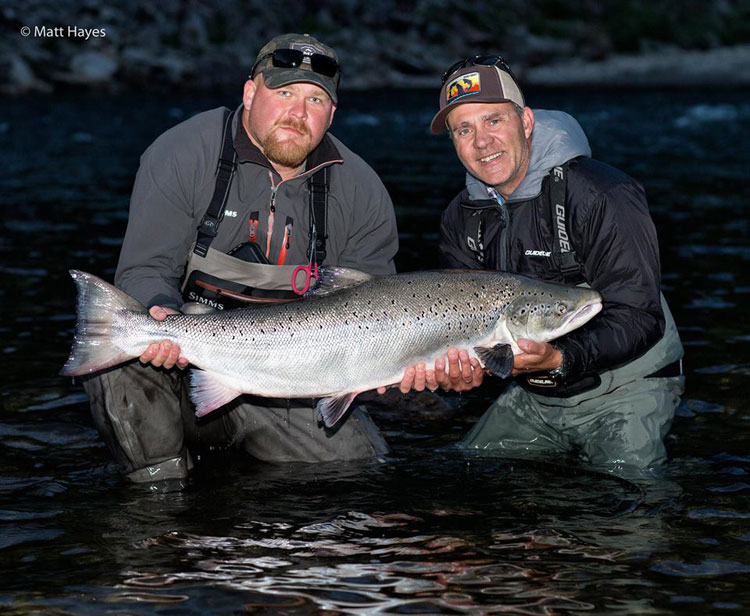 One of our regulars Ed Brown also managed to catch his fist Guala Salmon over 30Lb with this beauty at 30Lb 10z again from Old Bridge Pool. This fish gave Ed an epic fight from the tail of the bridge down almost to the top of the bottle pool, several hundred meters away.

Boje Johansen also had some luck with some big fish as you can see from this stunning big fish below. 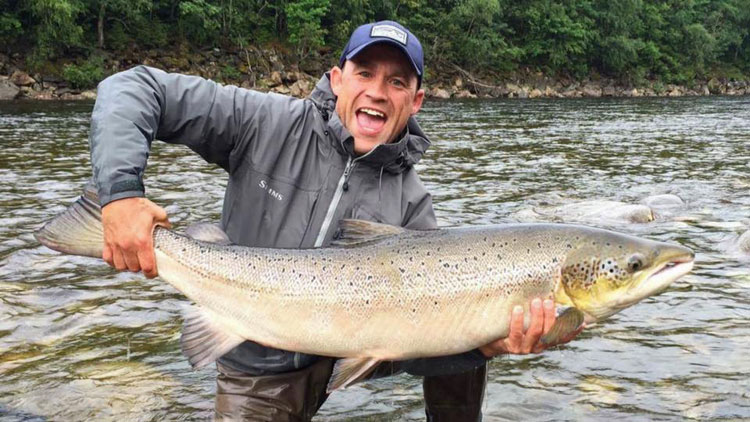 We also throughout the season had some special and memorable days at Winsnes. On the 17th June three salmon were caught – all of them by guests whom had never picked up a salmon fly rod until this week. Later in the day, half an hour after booking in, Kris took his first casting lesson and one hour later was bent into the first of two salmon.

Huge credit to our guide, George Howard whom guided both anglers to a lifetime experience.

The vast majority of fishing lodges in Norway are simply not geared up to give anyone less than experts a chance of catching fish. We are proud that our river management system and the facilities/staff make stuff like this possible… 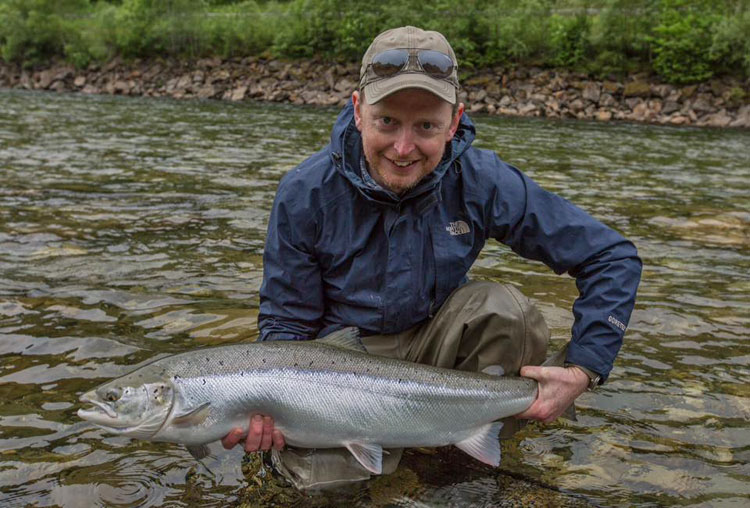 This is Will Sergeant with a fish from bottle pool.

22nd June look at this nice fish which was their second fish of the day for both Angela & Andrew, a cracking fish that measured 95cm and what a way for them to celebrate their 13th anniversary. 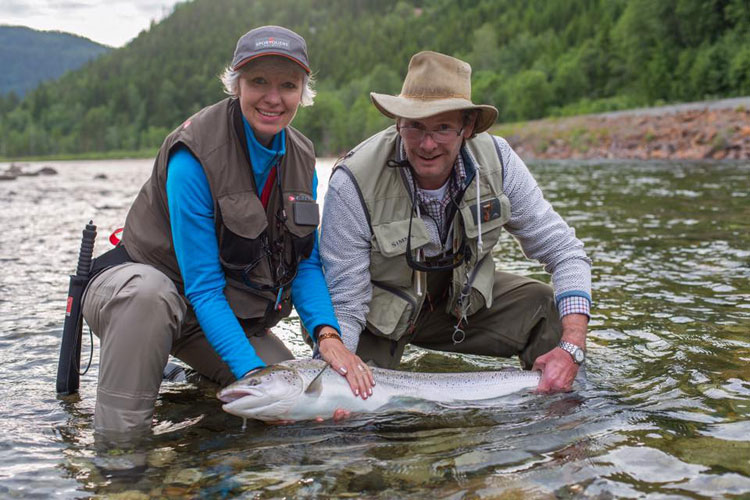 By the end of the first week of July our customers had landed over 70 Salmon with equally at least half that amount lost, which is a great start to the season. We are also proud that even though by this time we had all levels of anglers from complete beginners to experts EVERY single customer had at least caught 1 salmon in their week. Below are some of the fish they caught. 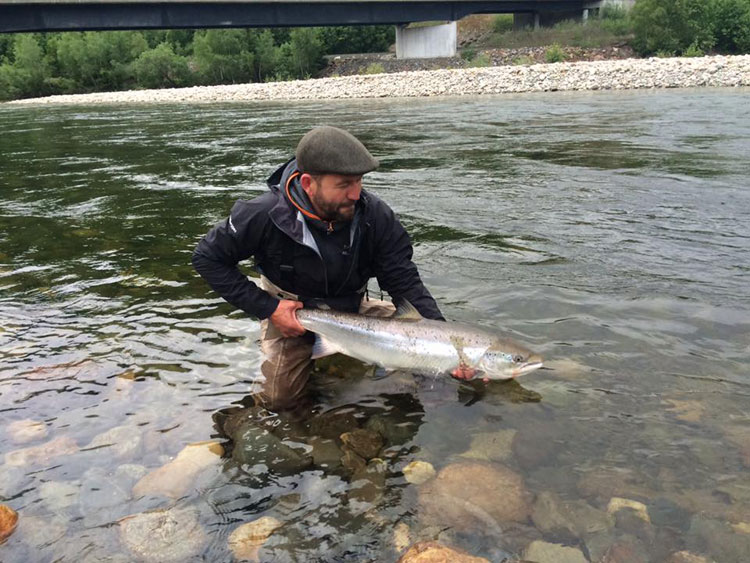 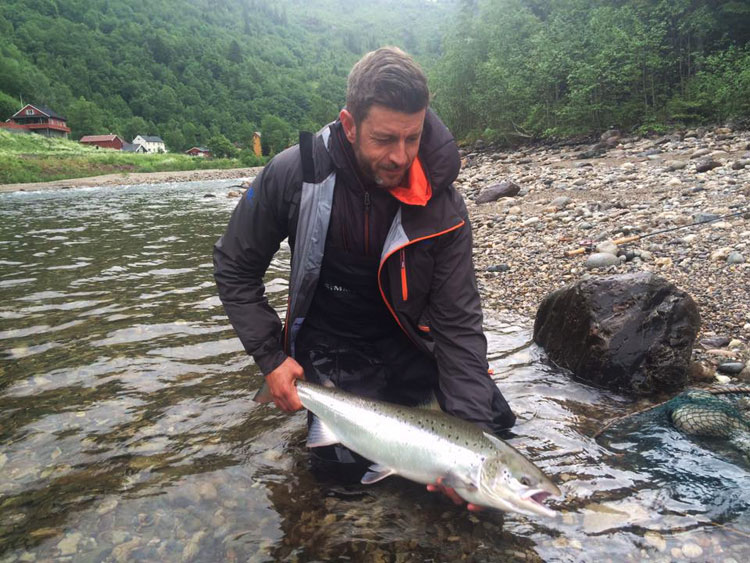 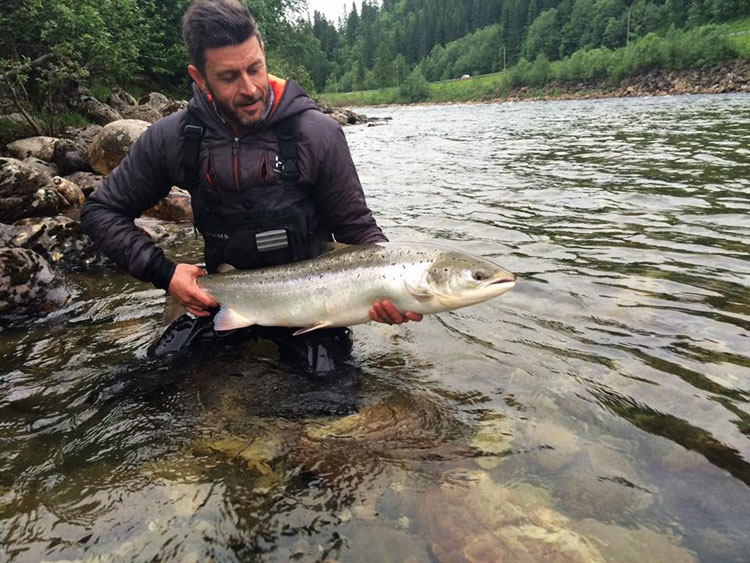 Some customers really did have the luck like Steve Atkins who on the 29th June had a amazing day to remember by catching his first twenty pounder and added another later. He finished the day with four fish: 25, 23, 18 and 16 pounds.

By the time we had reached the middle of July our water was getting dangerously low, however the fish just kept coming. On one week we only had 4 rods due to some cancelations and those customers have no idea what they missed. As you can see from below Michael holding a beautiful fresh fish that weighed 10.5 kilos and was just one of the 30 fish caught that week between just the four rods. 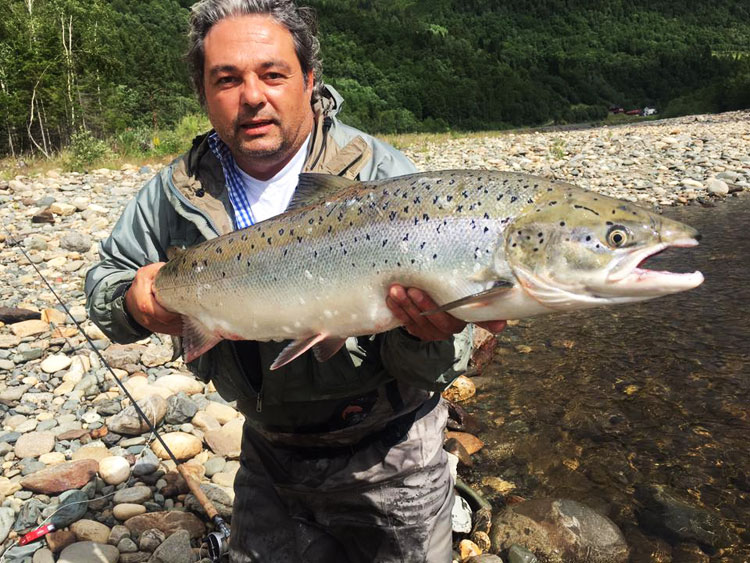 By the end of July we were really proud to be able to announce that our water on the Gaula produced more fish per rod hour than anywhere else on the river. A testament to us ONLY having fly fishing only, no combat fishing and all pools rested daily and lastly all our fishing is on a strict catch & release. Just one way we are working hard in making sure that our customers each year can have the enjoyment of landing fish like the one below. 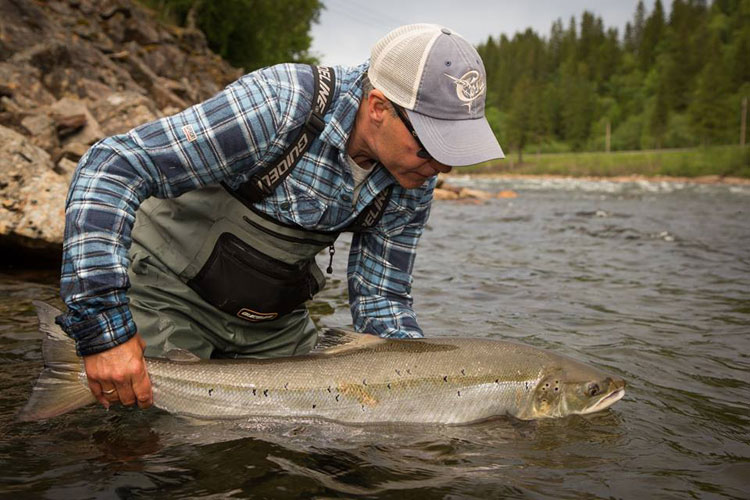 Below are a few pictures of some of most famous pools, how fishy do they look, imagine standing there fishing with the knowledge that there are 40lb salmon swimming past your feet. 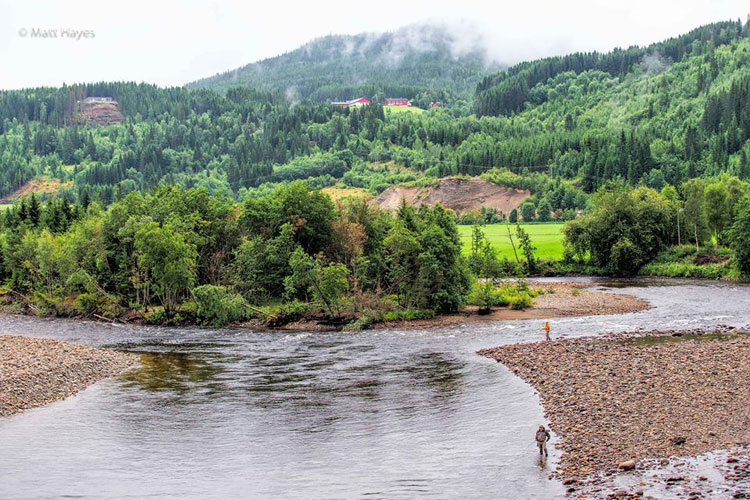 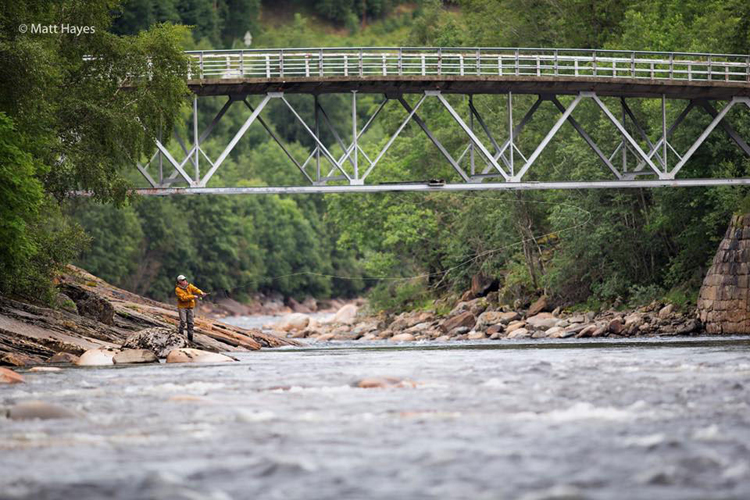 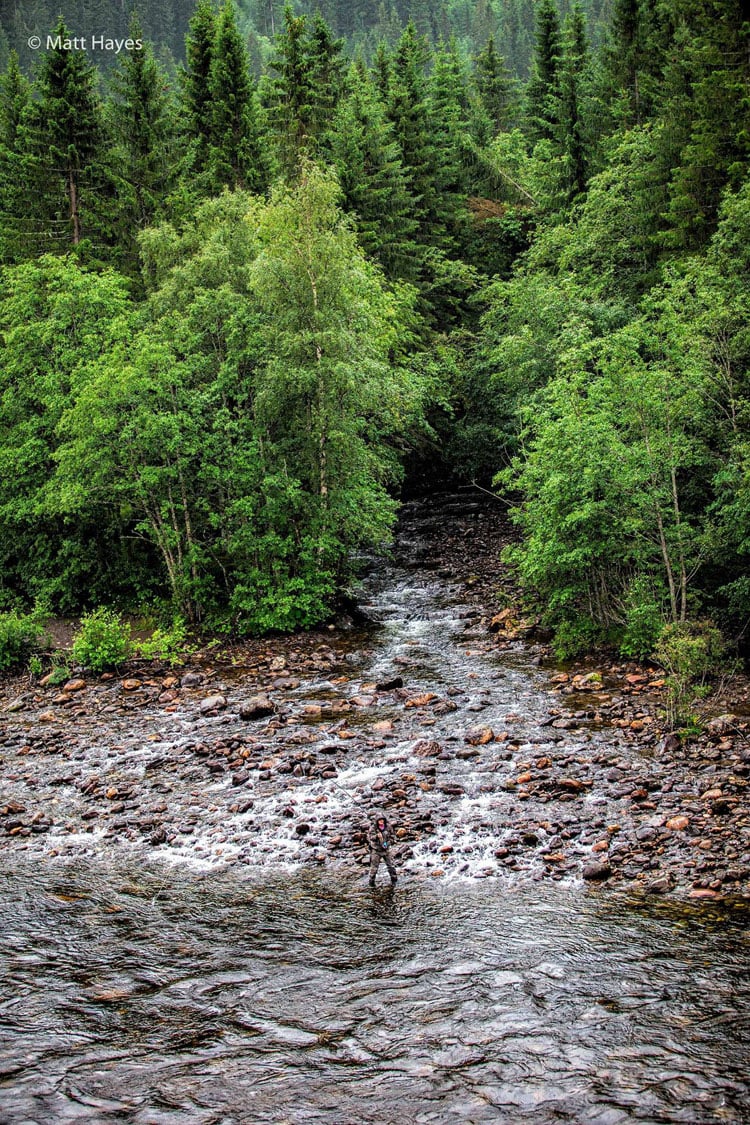 Unfortunately the short season was soon over with Stewart catching the very last fish of the season a 13 kilo fish. The river is now looking tired and the fish are getting to spawn. So its time to hand up the rods, do some maintenance work and let mother nature get on with her work. 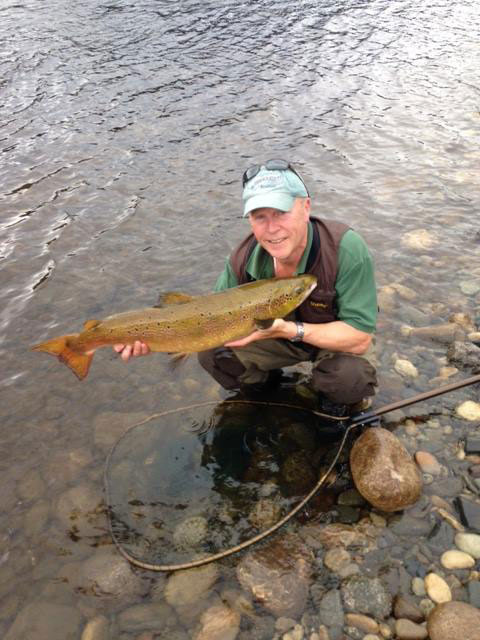 We are already looking forward to next season as we are sure it will again be a bumper year and hopefully if we can have some better water conditions we are sure there will be even more records broken.

If you would like to join us for the 2017 we do still have to odd rod available, so please contact me directly and I can talk you through all the availability and prices. If you would like to see the full details of our fishing packages to Winsnes Lodge Click Here