As the St Brandon’s Mauritius Season Begins it all started with calm sea and weather conditions ensured the first crossing of the 2017/2018 season was a really comfortable for all guests. On the trip were Mike  and Tim with a bunch of their friends, some of whom had joined them the year before on their annual extended stay on the atoll. To say we were excited would be lying. We were itching to get underway, this group containing some seriously skillful anglers who had on the previous year’s trip landed ten Permit and two double digit Bones between them. On top of it, they are just a great bunch of guys to fish and hang out with!!!! 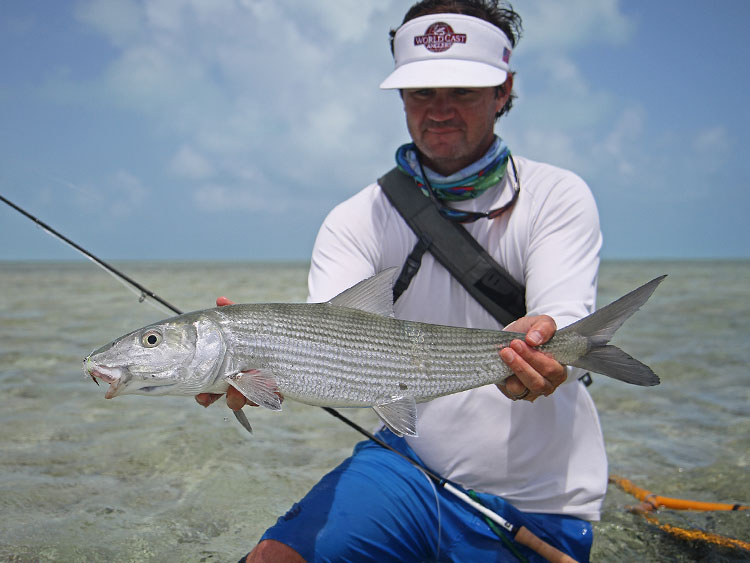 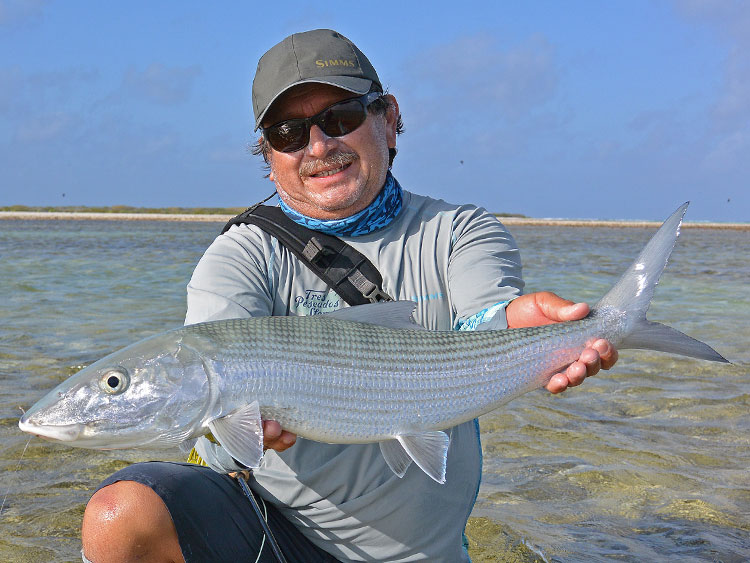 Day one lived up to everyone’s expectations with many memorable fish landed. The day kicked off with some phenomenal skinny water Bonefish fishing, with just over 45 fish averaging 6-7lb landed during the day between the 7 anglers. Zack and Mike got the biggest specimens for the day, both fish tipping the scale at 9lb. The day got even better when Mike landed our first Permit for the trip, with a 7lb fish coming off a coral ridge.  The fish was hooked in very skinny water and after a nervy fight it slid into the net. Congratulations Mike! But this was not the only Permit of the day, Mike who is one serious Permit junkie and in fact the 2017 Del Brown Permit Tournament grand champion landed an absolute ‘stonker’ of an Indo-Pacific Permit, the fish weighing just over 15lb. Congrats Mike! Our day was not done though…not by a long shot! Tim showed his experience by capping off the day with a 105cm GT. The GT was spotted harassing a school of Bonefish, following which Tim placed the fly between the GT and the Bonefish and made two long strips. The fish charged in and ate the fly, Tim setting the hook as it turned. Tim fought the GT very strongly, to the point where his rod separated at the first ferrule, but this did not stop him from landing his largest fly caught GT to date. Well done Tim! It was a great way to start an amazing trip.

After a cracking first day out on the atoll our guests were all very keen to get stuck in on the action as you can imagine. The great Bonefish fishing continued with many fish in the 6-7lb range landed during the morning session. There were numerous Permit shots as well during the day, with Alejandro “Sandflea” pinning a respectable 6lb fish to bring our tally to three in two days. Some of the atoll’s large GTs were also out and about on the flats, but despite some near misses none were tempted into biting.

The third day out started with a cracking Bonefish session with approximately 50 fish in the 6-7lb range coming to hand. There were many Permit shots during the day as well, Mike improved on his fish from Day 1 when he hooked and landed a beautiful 10lb Indo-Pacific Permit. Mike followed suit soon after and by the end of his third day he landed our third double digit Permit for the trip with his fin perfect 13lb specimen. It was another incredible day of fishing out on St Brandon’s. 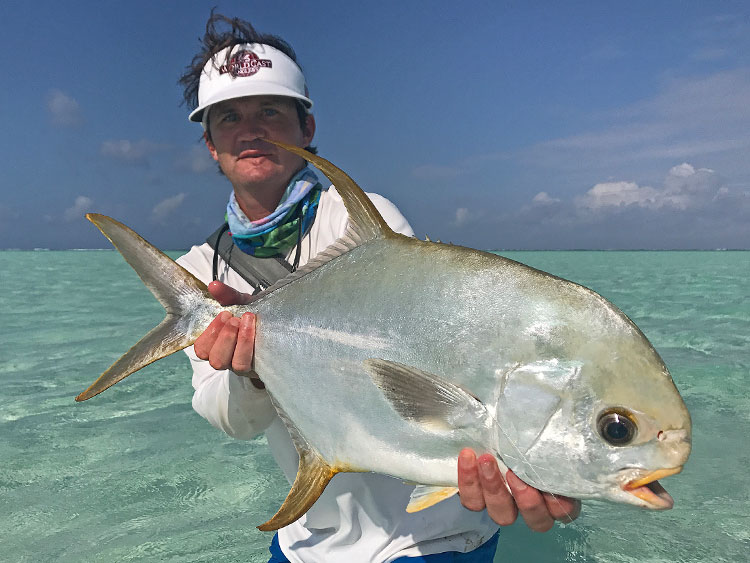 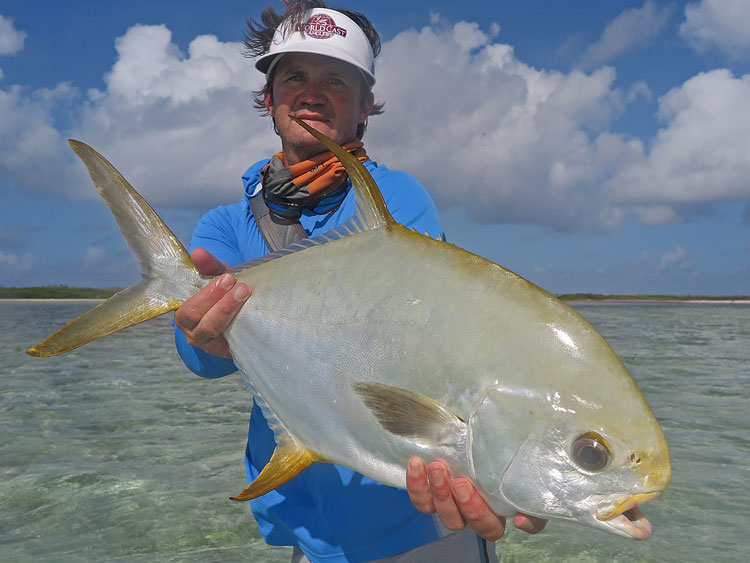 Day four saw all the guests getting well and truly stuck into the Bonefish during the morning low tide. We enjoyed some amazing skinny water action with in excess of 40 fish in the 6-7lb range landed. The biggest of the day went to Mike who landed our first double digit Bone of the season, a truly beautiful trophy 10lb fish! Good numbers of Permit were seen again throughout the day and by the end of it, two more had been added to the ever-growing list. Tim Brune, who has now caught a Permit on all three expeditions to the atoll he has been on landed a 6lb fish and Mike once again showing more of his great skill by landing another fine fish of 11lb. Congrats guys!

The fifth day proved to be one of the tougher days of the trip with bad light and some rough weather the order of the day. The fish were still about but challenging conditions made spotting them in advance and then presenting to them more challenging than normal. Nevertheless there was a silver lining to the day when Mike landed his fourth Permit in five days. The 10lb fish was spotted tailing in a pod, which was made up of 6 individuals. He cast straight at the lead fish and it aggressively ate the fly. After a quick fight and a few photos the fish was sent on its way.

The Bonefishing improved on Day six as the weather conditions was infinitely improved from the previous day. The average size of the fish landed was a very credible 6-7lb and in total +/- 35 of these silver bullets came to the net. Mike later got his third Permit of the trip when he spotted a fish slowly snaking through some slack water. He sent out a pinpoint cast and the fish followed for a good 9 feet before eating the fly. Intense to say the least but a memory surely never to be forgotten. The fish fought hard but Mike held firm and after a brief battle we weighed another 10lb Indo-Pacific Permit. The day got even better for Mike who continued his hot streak when he hooked and landed a 13lb Permit that was spotted swimming with some Bonefish. Mike weathered a really tough fight after the fish headed for the coral before he eventually got it to the net. There was also some great Golden Trevally action across a few of the flats which added some great spice to an already very enjoyable day out. 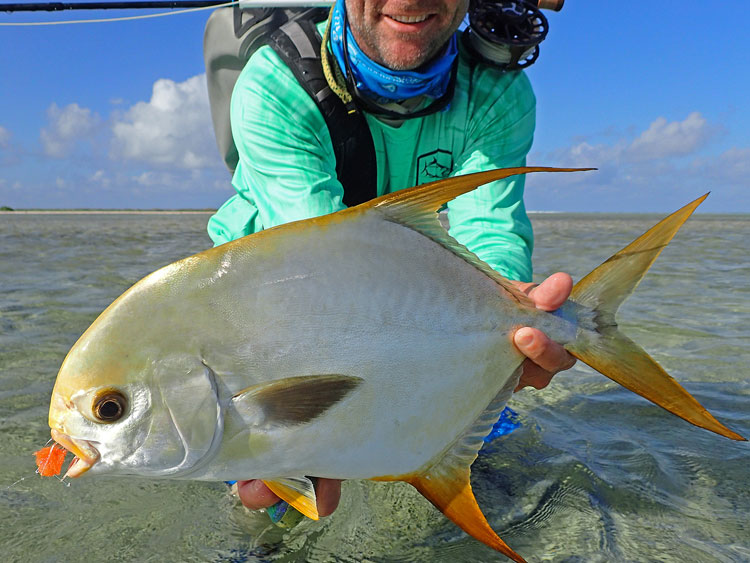 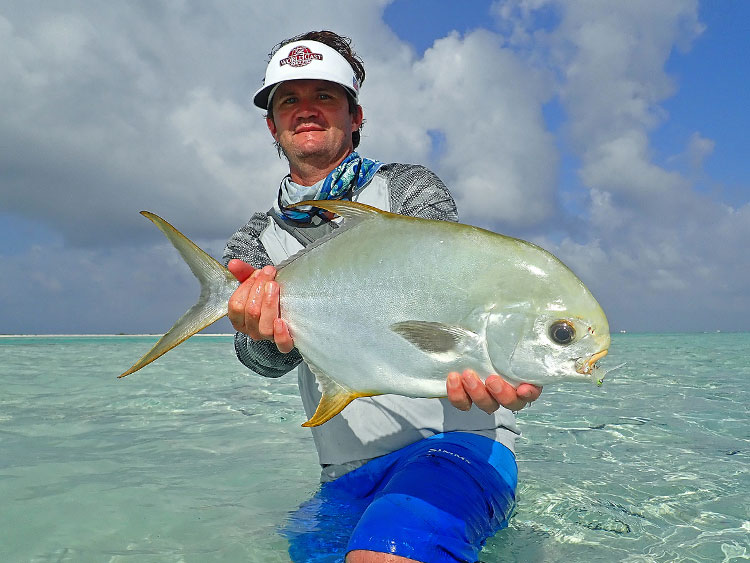 The Trevally action really picked up on Day seven. The Goldens were thick across many of the flats and thus the anglers landing a number of respectable fish between them. On top of these gorgeous fish, two large Bluefin Trevally were caught during the day. Alejandro “Sandflea”  caught a super strong 72cm fish on his 9wt after the fish took him deep into his backing and almost into coral on more than one occasion. Tim then landed the fish of the day with his 75cm Bluefin Beast. The fish was spotted slowly cruising the shore of an island. As the fish approached Tim sent out a cast, leading the fish by a solid five meters. As the fish came closer to the fly Tim gave one long strip and the fish raced across to eat the fly. The fish fought very hard but Tim was on him from the start and made light work of the big fish. Some incredible Bonefish were once again landed throughout the day, the average size still very high around the 6lb or 7lb mark. Mike D continued on his merry may with his sixth Permit of the trip breaking the record for the most Permit caught by a single angler on a trip to St. Brandon’s. He had to work very hard for his 6lb fish, having to make numerous casts at the slow moving fish before it ate. So granted not the biggest he has landed by any stretch, but a special one nonetheless!

Day eight and nine saw some challenging tidal scenarios, nevertheless we worked hard and were rewarded with many shots at Permit and big GTs. Sadly our hookup and landing ratio was not very high, but still some incredible moments were enjoyed by all. The Bonefishing however was out of this world, the average size fish moving up to 7lb-8lb. Over the two days we landed just over 50 fish between the group, Kelsey and Mike D both landing fish a mere pound off the hallowed 10lb mark. It was a reminder that despite some incredible Permit fishing, one can never forget the unbelievable Bonefishing this atoll produces week in and week out!

This brought an end to an incredible first trip of the season on St Brandon’s, which included eleven landed Permit, a 105cm GT, one 10lb pound and five 9lb Bonefish, some great Bluefin and Golden Trevally and many many 6-8lb Bones. We would like to thank everyone in the group for once again joining us out on the atoll….we look forward to seeing them again in just under a years time! 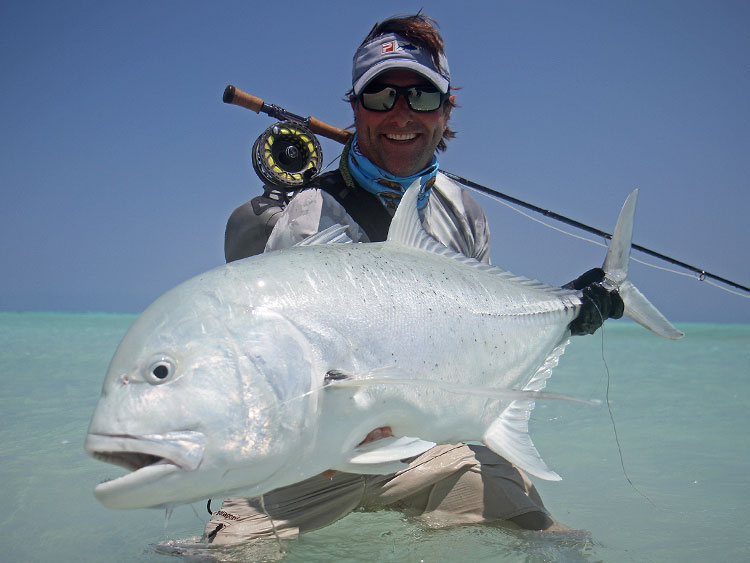 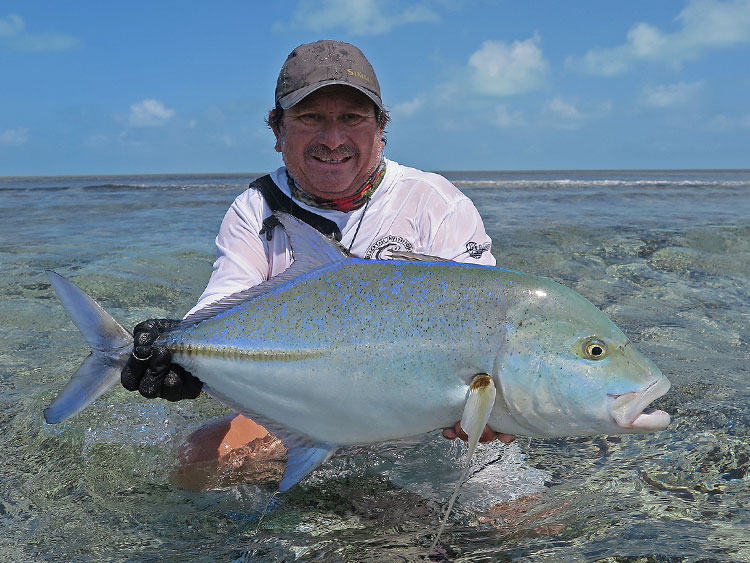 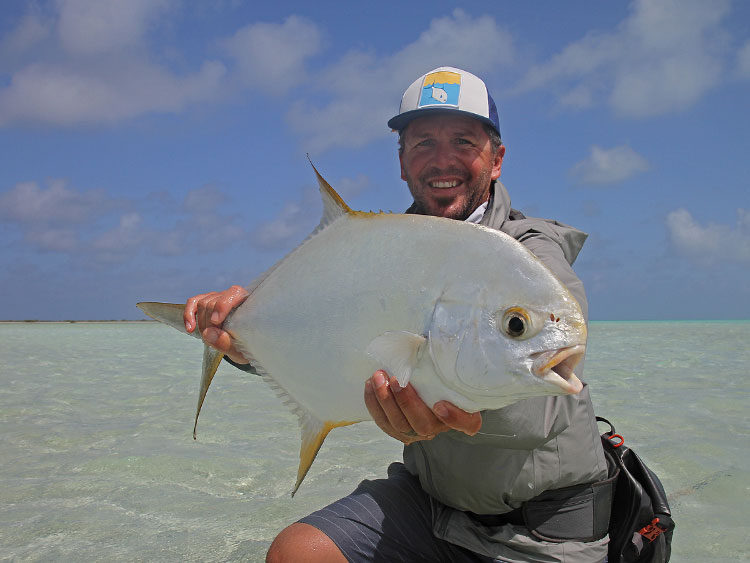