By Dave and Emily Whitlock written for Fly Fisherman Magazine 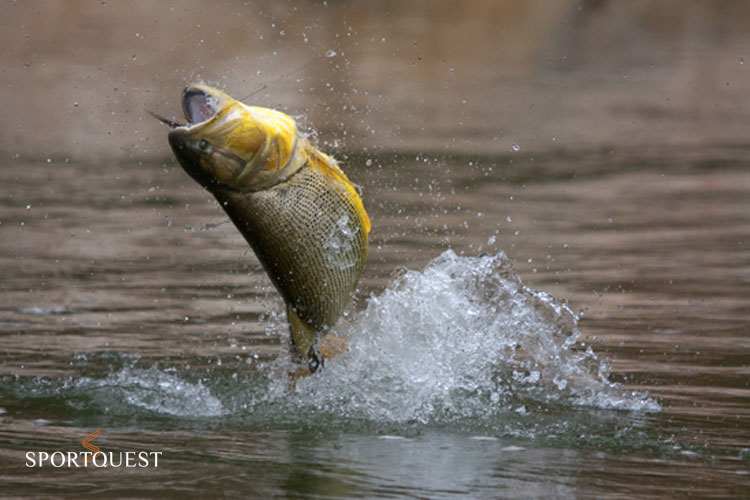 Long ropes of purple-flowered jungle vines hung from the limbs of a 200-foot tree and down the face of the smooth rose, yellow, and rusty-red sandstone bluff. The turquoise eddy rotating against the bluff was flecked with white foam collected from the rapids and riffles above. Only ten minutes before, Emily had landed a platinum-gold, 20-pound dorado and she was still glowing from her success.

I could see several leg-long, luminescent golden-olive backs steadily porpoising among the foam patches, and tried to quietly wade into the best position to make a 70-foot cast to reach the bluff side of the eddy.

I could sense the encouragement from my gallery—our guide Alejandro, Emily, Joey Lin, and the two native boatmen who poled us there in a long, stable dugout canoe. 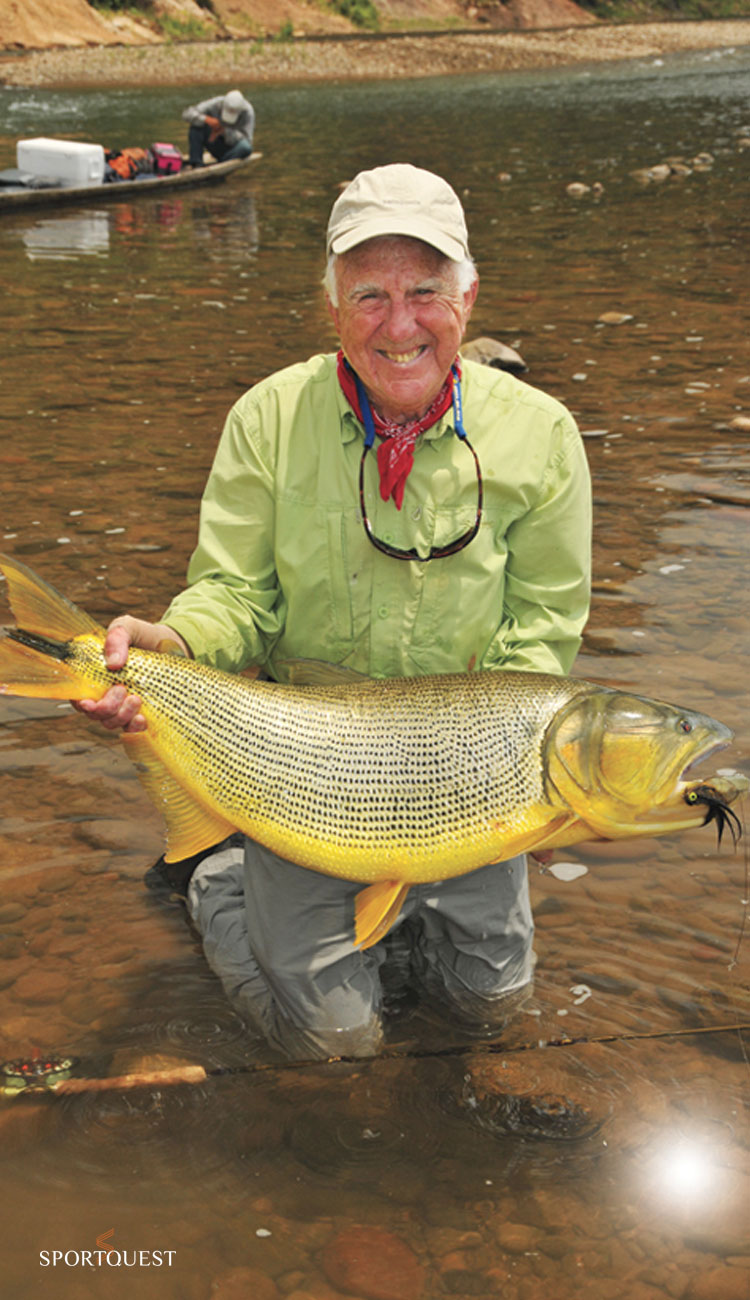 Earlier that morning I hooked a 30-pound fish from the canoe but another dorado joined the fray and bit my leader about three feet from the tip, immediately freeing the giant. After that loss I was hoping for another chance, but how could I know that my next cast would be the one that I would never forget?

The opportunity for that cast was set in motion several months earlier when Joey, e-mailed us photos of huge, gorgeous dorado taken from clear, Bolivian-jungle mountain streams. The waters looked like classic trout streams you’d fish in Montana, Argentina, or New Zealand.

This remote fishery was discovered several years earlier by young, pioneering Argentine fly-fishing guides who created the Tsimane fishing operation, named after the local indigenous ethnic population. The operation now has two luxury base camps as well as outpost camps deep in the Bolivian wilderness. They have worked to improve these jungle facilities to share this one-of-a-kind fly fishing with fly fishers who could appreciate, respect, and help preserve its treasures. 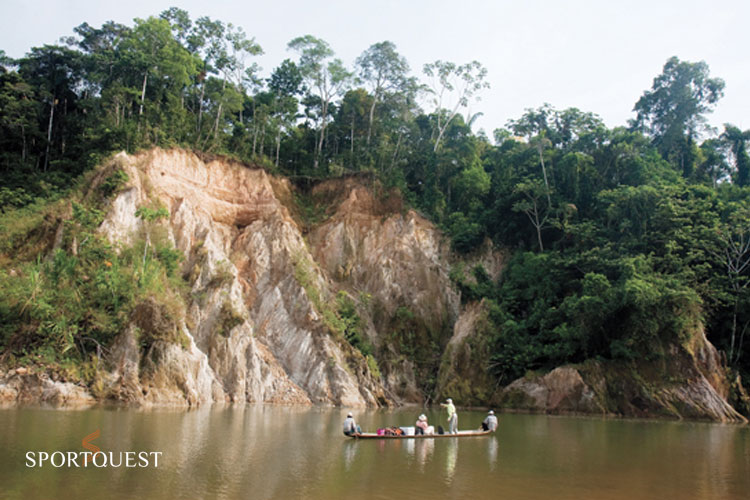 Transportation on Tsimane rivers is by dugout canoes operated by boatmen from the indigenous population. Photo Joey Lin

After we confirmed our October 2009 dates, we prepared for almost two months by walking, biking, wading, and casting large flies on our 9-weight rods to get into shape for the opportunity. I spent days tying 4- to 10-inch dorado streamers, wakers, and divers. We packed our cameras, clothes, and gear, and joined our friend Ken Ewing for the first leg of our journey to Santa Cruz, Bolivia.

At the Santa Cruz airport we were picked up a by a lodge hostess and escorted to a Santa Cruz hotel for a welcome overnight rest. We flew the next morning in a small Cessna with the fourth of our party, Don Johnston from England.

The 90-minute flight over miles of wilderness rainforest ended at a remote jungle airstrip where we were greeted by our Tsimane guides and boatmen from Asunta, a nearby native settlement. 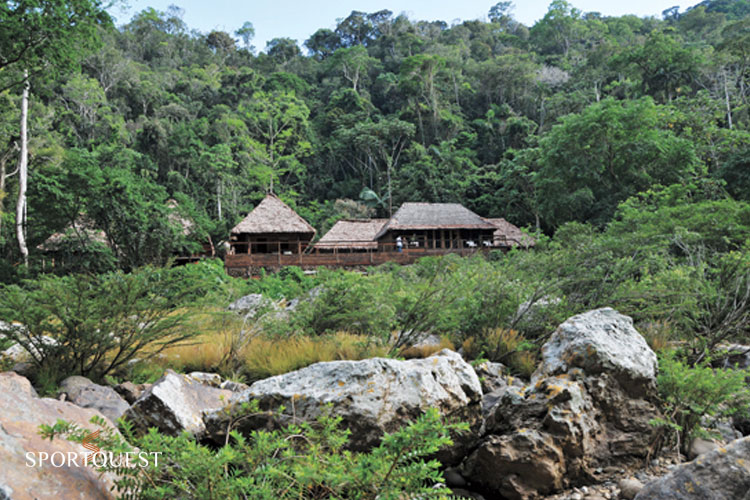 Two hours before sunset, Joey took us upstream for some afternoon fishing. On my fourth cast, with the first fly I’d tied for the trip, I hooked and landed an 18-pound dorado that jumped nine times.

For the next three days we experienced fishing and scenery like nothing we’d ever known. We started each day with a hearty breakfast and strong coffee, then got into canoes with our guides and boatmen. One group would head upstream and the other downstream.

All day we canoed and walked through spectacular country, finding deep-colored macaws in flight; leaping monkeys; fresh tracks of tapirs, jaguars, and other jungle cats; colossal trees covered with epiphytes; flowers and vines of all colors and descriptions; exquisite butterflies; and birds we’d never seen. And around every bend, we found another chance for big dorado, pacu, or yatorana. 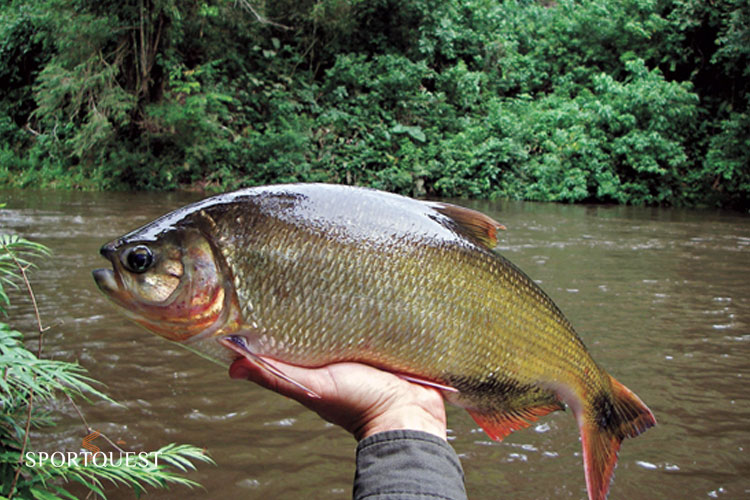 Yatorana average 3 to 10 pounds and look like a cross between a dorado and a rainbow trout. They take dry flies, nymphs, and streamers and are hard fighters for their size. Bring a 6- or 7-weight rod for these fish. Photo Noel Pollak

After three days at Secure River Lodge, we flew to Pluma Lodge, arriving there after a flight and a five-hour boat ride.

The three guides at Pluma—Ramiro, Fabian, and Alejandro—are expert fishers and boatmen and we fished a different river with a different guide every day.

Nearly every day we hooked and landed dorado between 8 to 20 pounds and lost more and larger fish to wrenching strikes, acrobatic leaps, headlong runs, and sharp teeth.

Despite their aggressive behavior, the dorado were also wary and required stealth in each fishing situation. We were regularly forced to move to undisturbed areas.

After the rigors of canoeing, hiking, long casts with big rods, along with the exciting highs of dorado hook-ups and strong fights, we fell exhausted into bed each night with smiles on our faces.

One day, in the boulder-strewn upper section of the little Itirisama River, Emily sight-cast to, and landed a brilliantly colored, 26-pound fish in pocketwater. I couldn’t help feeling that we’d truly accomplished our mission. The fish’s golden and crimson beauty had iced our cake, especially since Emily enticed the big dorado with the last fly I tied before the trip. 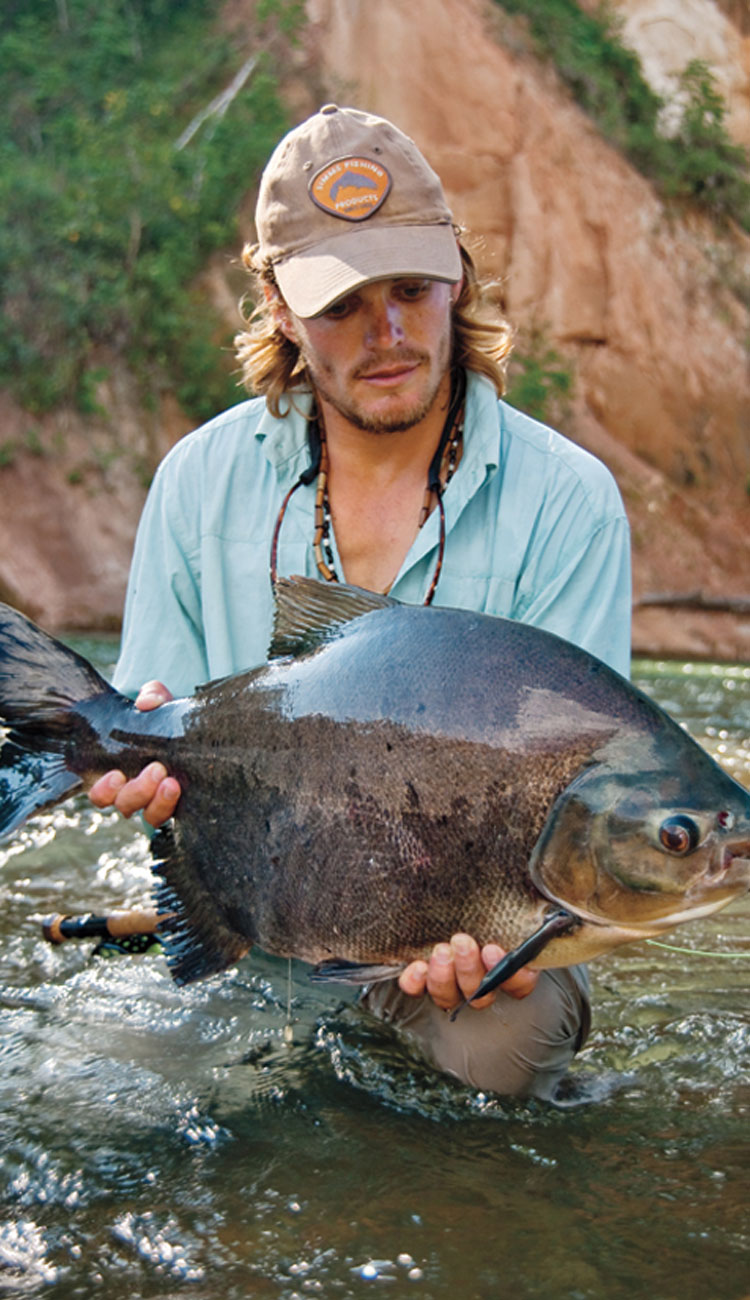 Pacu average 12 to 18 pounds. They are omnivores and often eat flowers, leaves, and nuts that fall into the water. They do not jump but are strong, long-winded fighters. Photos Joaquin Aracena

The fly was intended to simulate a jungle fruit that pacu feed on as it falls from towering bankside trees. After we’d discovered its irresistible appeal to pacu, it was dubbed “Dave’s Forbidden Fruit.”

The main prey of dorado are sabalo, schooling sucker fish that move up the Tsimane river by the millions to spawn, with dorado following them all the way to the upper river sections. When dorado strike these baitfish, they try to bite, kill, and swallow them in one swift, powerful move. If the attack happens at the surface or in shallow water, it looks and sounds like bowling balls crashing to the water.

Happily for us, dorado attack a fly the same way. At Pluma Lodge each morning at first light, hungry dorado woke us up pounding the shallows and devouring sabalo on the far side of the river. Two of those mornings, while poling across the river in a dugout, I interrupted their breakfast with great results. 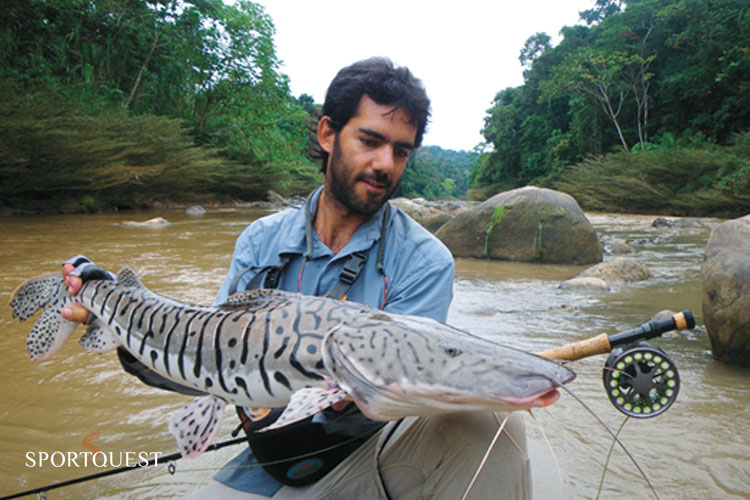 Cachara average 24 to 75 pounds. These beautiful, exotic, vividly marked, black-and-white catfish take flies fished deep and slow. These catfish are for the strong, adventuresome types who have an hour to wage a long, hard tug-of-war. Photo Joaquin Aracena

The steely-hard mouths of dorado are studded with short, strong, razor-

sharp teeth fortified with crushing, severing jaws. The shape of their heads is unforgettable, with hammered-gold and rose-colored gill plates. If your hook is sharp and holds, and your wire tippet is not bitten in two, you will experience a series of tarponlike leaps, and lunges toward river structure or distant parts of the river.

If you stay connected long enough to tire the fish, you can force it into the river shallows, but this often brings another series of mad leaps and lunges, compounding the ache in your tendons and muscles and increasing your anxiety about a last-minute loss.

On my last, unforgettable day, as I began my cast to the eddy’s far bank, a tingling sensation ran up my spine as I thought about the potential for landing my largest dorado ever. 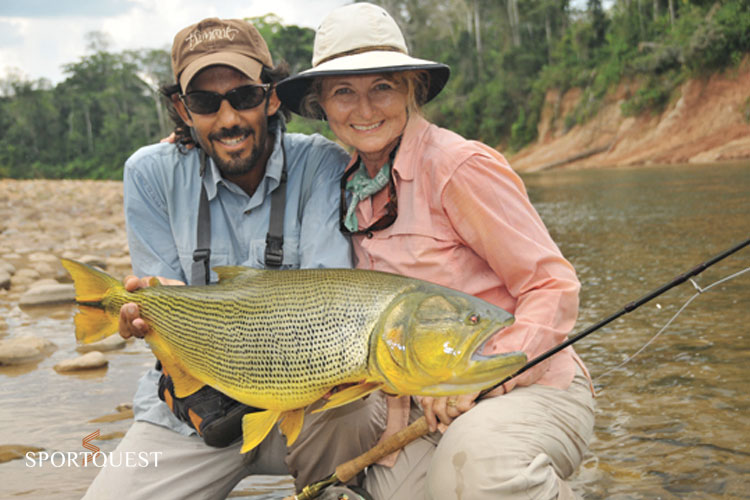 Emily Whitlock and Alejandro Bianchetti show off a large dorado that was sighted and stalked in the clear waters of the Bolivian jungle. Photo Dave & Emily Whitlock

I got off a strong backcast, let several more feet shoot back, and then hauled forward and shot to the eddy’s far side. My loop carried a black, 7-inch deerhair Dorado Waker to the base of a sandstone bluff, and I made a quick upstream mend to straighten the line. I began to swim the big-headed fly over the long, luminescent shapes suspended in the eddy.

After several two-foot strips, the water erupted. I remember the searing sensation on my wet stripping finger as the dorado grabbed my fly and tore downstream.

Somehow I managed two hook-setting strips and then, bursting through the surface in an exploding, body-writhing leap was a dorado that looked bigger than I’d even dreamed of. 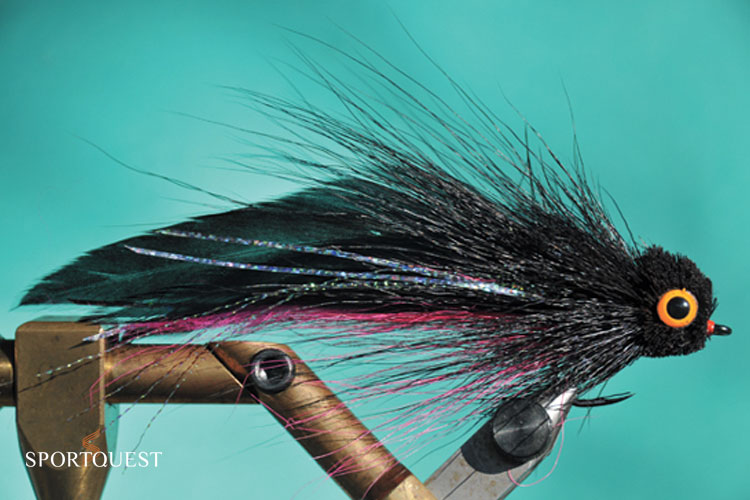 I lost track of time, the number of jumps, and the length of its runs, and only returned to reality when the big fish tired and let me gain some control of the battle.

I recall our guide, Alejandro, with his hand on my shoulder telling me in his relaxed, Argentine voice that there was no need to rush or horse this trophy. Relax and take your time. Those were the words my frayed nerves and tired arm needed to hear.

As I guided the fish into the shallows, my mind quickly listed all that could go wrong: Would the hook hold? How badly is the wire chewed? Are the knots okay? 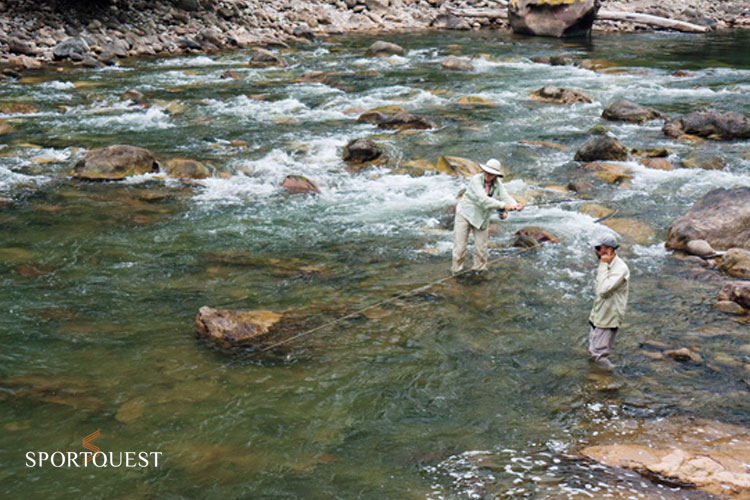 Finally, Alejandro cradled and raised my great fish from the water for our cameras: my once-in-a-lifetime 33-pound golden treasure. 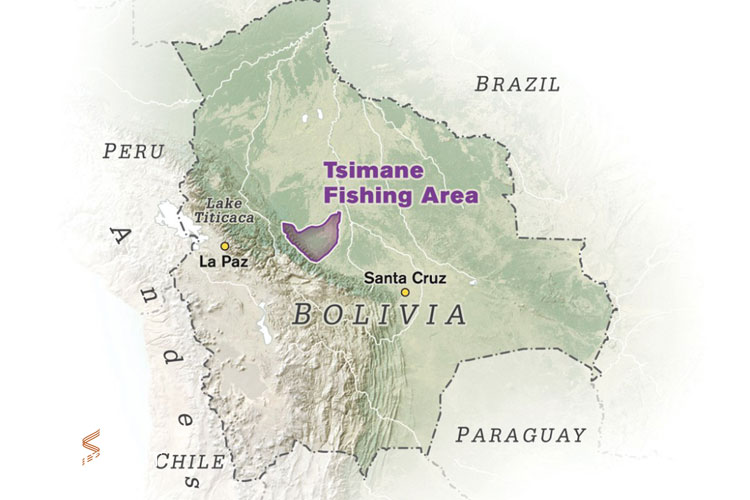