Day 1 – Having a nice neap tide in the morning a plan was made with two boats moving north east to target Bonefish, while the other two boats headed slightly south looking for GTs. The Bonefish were found tailing over turtle grass flats in super skinny water and the guys took full advantage and capitalised on some really good-sized fish through most of the day. The one boat that had gone south found a school of feeding Bumpies tailing their way across the flats.  Mike quickly found himself in a serious battle when he hooked his first Bumpy.  After an extended fight he managed to bring another one of these incredible fish to hand. Congratulations Mike.  As the tide began to push, the focus quickly shifted to GTs. Good numbers  were seen making their way across the flats and we made some of the shots really count, the largest fish for the day measuring an impressive 95cm. 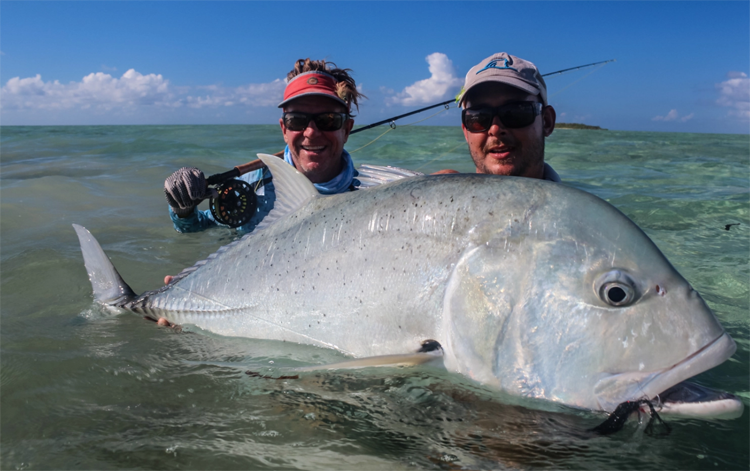 Day 2 – We continued our focus on the Bonefish such was the high standard and all of the guys managed to get tangled with some really good quality fish.  The Triggers also started to feed more aggressively on certain flats and the team of Ivan, Scott and Kyle got well and truly stuck in, landing five fish between them.  In true Triggerfish fashion, Kyle learnt firsthand on how tricky they can be bringing them to hand, hooking nine fish throughout the day. Dick also got in on the Trigger action when he landed an impressive Giant Trigger.  The Sailfish continue to provide us with some spectacular fishing,  Mike landing another ‘first’ after he enjoyed a very good specimen tail walking across the horizon in the setting sun. The Geets were around in respectable numbers, with moderate numbers landed by all four boats.  Dick fell victim to an absolute monster of a Geet that came free swimming across one of the drainage flats. A quick presentation and the fish swiftly charged and engulfed the fly. Moments later the water erupted and the fish sped off into the distance leaving a shell shocked angler and guide looking at a shredded leader without a fly. 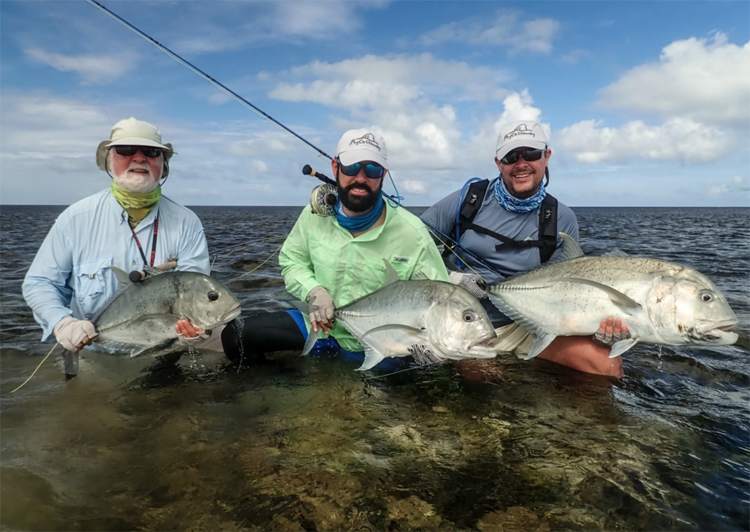 Day 3 – Ivan started the third day off with a bang and managed to land a nice size GT that ate the fly only centimetres from the rod tip.  He followed this up with a hungry Yellow Margin Trigger and as the tide pushed them off the flats, he went off shore to complete his slam with an impressive Sailfish.  Scott, his boat partner, decided to do things the other way round and landed a Sailfish shortly after Ivan’s before going back onto the flats where an impressively large GT was spotted. A quick hop out of the boat and the chase ensued.  Eventually the GT turned and Scott was able to present a shot.  The fish hesitantly moved towards the fly and at the last minute, chased and ate the fly.  Having realized the size of the fish, the drag was locked down and the fight was on. The ocean-going fish was however soon landed and measured an impressive 110cm.  Congratulations Scott! Jeronimo and Chuck also got in on the Sailfish action and both landed very good fish. 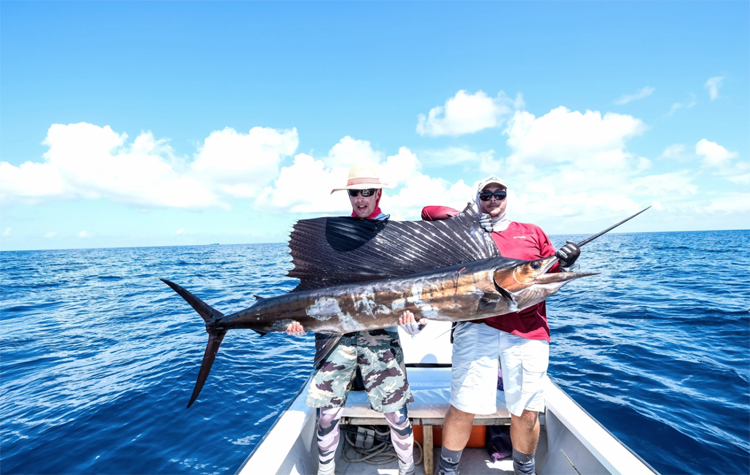 Day 4 – Up until this point the weather had played along nicely providing clear skies and light winds. Our fourth morning however was a completely different story  when we woke up to wind, rain and clouds (not a guide’s ideal choice of conditions as visibility is far from ideal). This didn’t stop us from getting out there though and giving it a good go.  Although the vast majority of GTs were only seen at the last possible second, a number of good sized fish were landed when we had opportunities to cast at bow-wakes, tailing Geets and fish moving with their dorsal fins exposed. The Bumpies were back in full swing and chuck managed to land a really good-sized fish after having to dodge some big coral bommies and turtle grass mounds. Camillo on the other hand had one particular fish set in his sights, after losing too many to speak of the season before. He patiently stalked and cast at Triggers throughout the day before it paid off with an excellent cast and a good sized and obliging Giant Trigger crushed his crab pattern. Congrats Camilo! 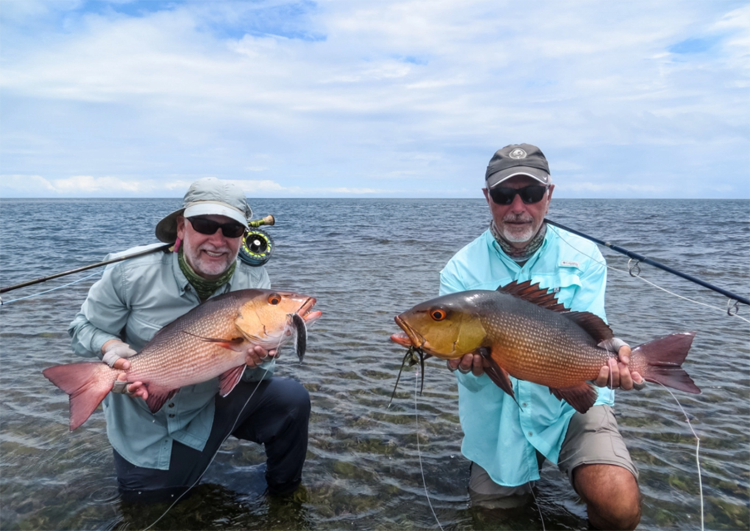 Day 5 – The unseasonal weather conditions were still around on our 5th morning. This together with prevailing south easterly wind shifting to a westerly, meant large portions of the leeward side of the atoll provided less than ideal visibility. We opted for the most part to head across to the eastern side once again to continue our exploration of this part of the atoll. This proved a very good move under the current conditions and by the close of the day many good GTs had been landed. The team of Jeronimo, Juan and Camillo had a standout day and managed to land 8 solid sized GTs in quick succession. The highlight of the day however had to be the magnificent Napoleon Wrasse which Dick managed to keep out of some truly gnarly coral heads. The fish measured an incredible 109 cm and quite possibly the biggest Napoleon Wrasse landed on a fly rod to date. Either way it’s an incredible catch…congratulations Dick! 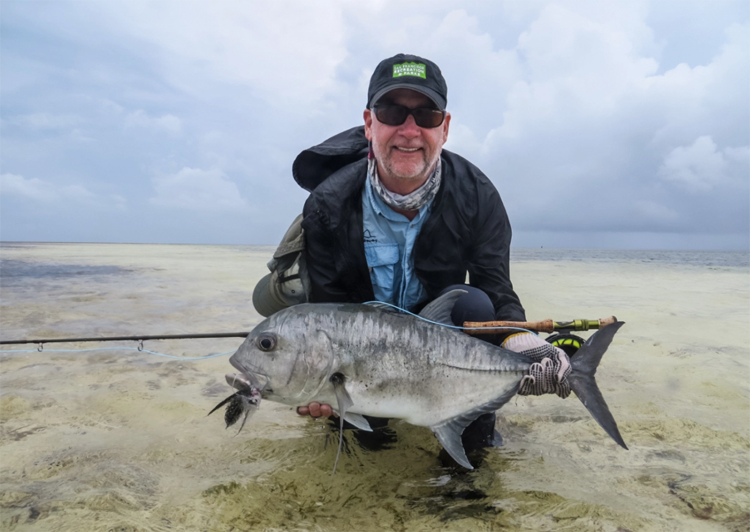 Day 6 – Unfortunately more tough weather and a distinct drop in barometric pressure greeted us on our 6th morning. Somehow we still managed to get some decent fish onboard, the special moments all came from the atoll’s Indo Pacific Permit. Good numbers of them were seen across many of the turtle grass flats, their bows waves and tailing action often confused with tailing GTs in the tough light. This resulted in some less than ideal setups but still provided some high energy action to these beautiful fish, some of which would have weighed close to 20lb.  Our day with them will come! 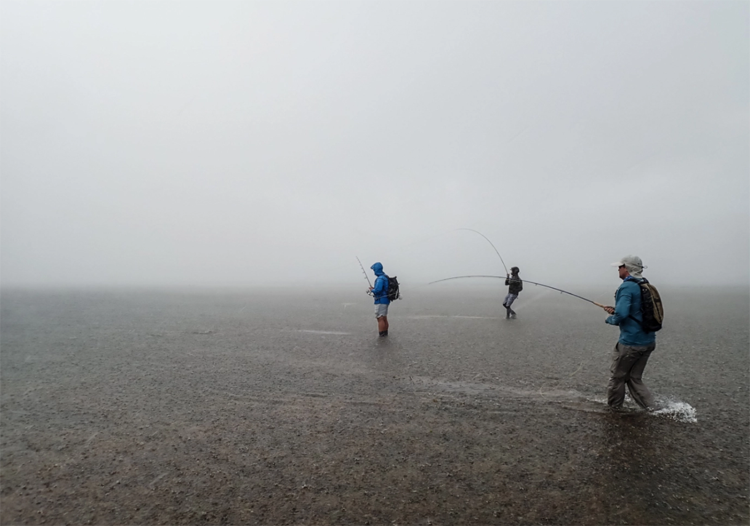 Day 7 – Nearing the end of the trip the guide team was determined to put a big effort in over the final two days despite the tough weather. Some of the boats opted to go down “South” to target some of the big brute GTs that patrol the reef edges.  This proved to be an excellent move as the team of Ivan, Scott and Kyle found themselves perched on coral heads during the pushing tide with GTs piling through on their way up to the flats. Juan who on the previous trip managed to tame a 120cm beast, continued his big fish mojo by bettering his previous personal best with a massive 122 cm fish.  The fish was distinctly blue as it surfed in on a wave. Juan promptly made the cast, leading the fish by quite some distance. The fish meandered slowly towards the fly and as the fly was stripped, the fish kicked and veraciously opened its enormous mouth to take in the fly a mere 3m from Juan. The noise made by the eat was intense and the fish quickly sped off into the backing. The boat on this occasion had to be used as the fish ran directly for two large coral gardens.  Eventually the fish was landed on a sand bank away from any coral.  This proved biggest fish for the season and another truly memorable moment for our good friend Juan.  Well done!!! 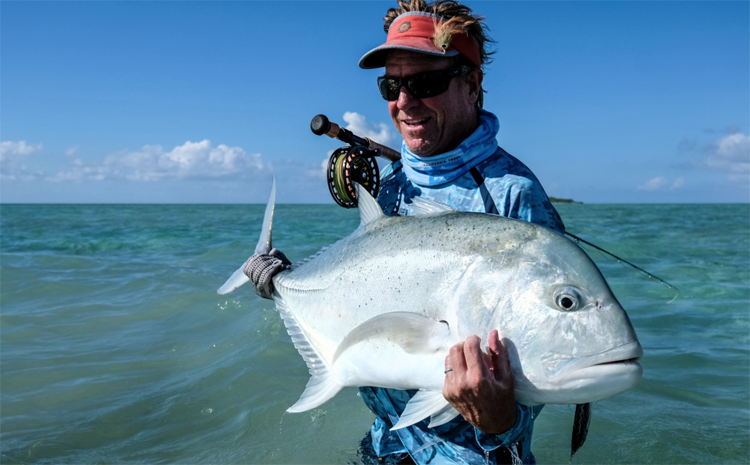 Day 8 – Our final day had arrived but sadly the weather had not abated, in fact the westerly wind increasing in strength leaving the entire western edge closed out by waves. As the tide reached the high tide slack, the swell resided and the boats headed out onto the flats.  Sadly the conditions did not improved and with safety being our first priority the decision was made to come back to the mothership. Obviously this is was a real let down for everyone and not the ideal way to end a trip of this nature, however looking back we had caught some truly incredible fish during the past week or so and with the inclement weather hanging around us it would be scary to think what would have been possible. There were clearly some very impressive fish around! We would like to thank the group once again for coming out to fish with us, they are always a huge treat to fish with and really handled the trying weather exceptionally well. We are already looking forward to seeing you all again in the near future! 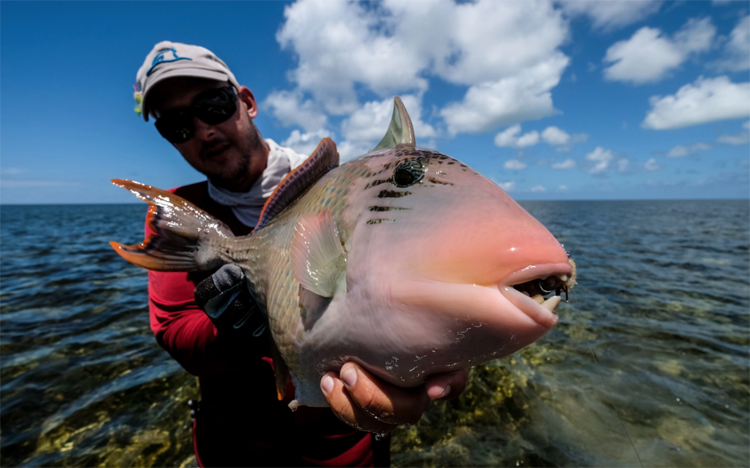 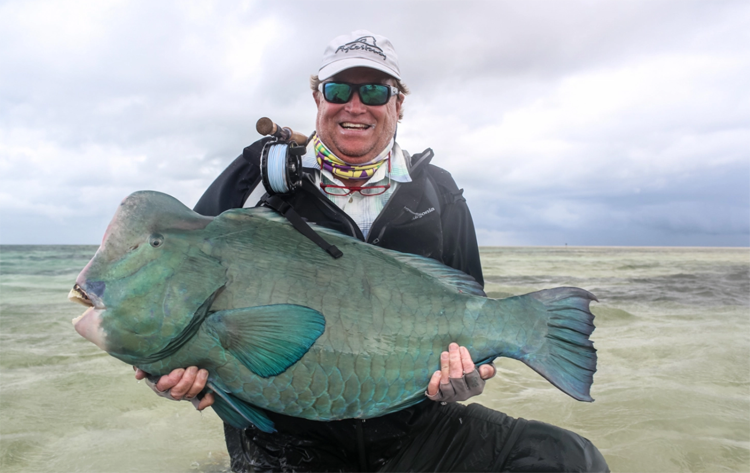 Why not join us in 2019 as we have some great dates available.

Also remember at Sportquest Holidays we offer the complete package for ONLY £9,979 including all international flights. See full details Here