The hosted Halibut trip for 2018 to Havoysund is now over and what an amazing trip it has been for everybody involved, lots of fish were caught between both the Sportquest boats with a complete zoo creature caught on the last drift of the last day to finish the trip off brilliantly. Come take a look at what we all got up to whilst in the Kingdom Of The Halibut, the premier location in Norway to snare that dream fish you have always wanted, the one and only Havoysund. 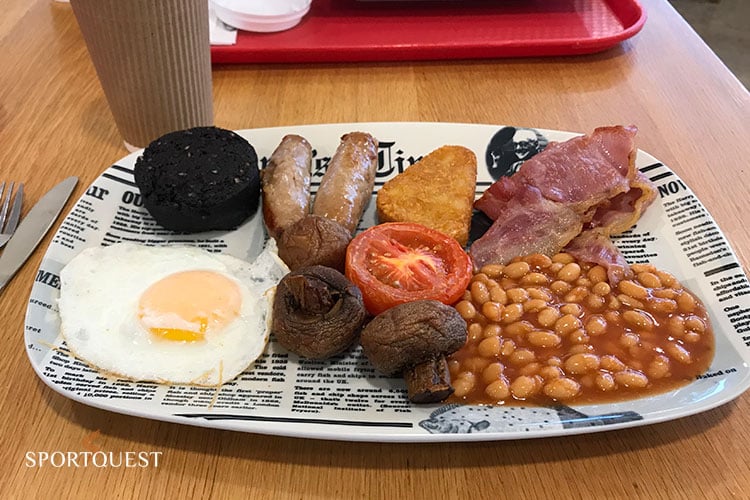 The first day as always on this trip was a flight to Oslo with an overnight stay at the airport hotel where all the customers met up and enjoyed an amazing meal and a drink together, everybody was getting along well with each other, we all had the same thing on our minds and that was catching Halibut. After the meal we headed of to bed, ready to catch up on some sleep for the next days travelling to the camp. The next morning we made our way back to the airport and caught the connecting flight up to Alta where we were then met by the bus taking us on the last 2 and a half hours of our journey, this has to be one of the most picturesque journeys by road I have ever taken, surrounded by mountains with herds of Reindeer popping up here and there (some just standing in the road not moving) the time just flew by. 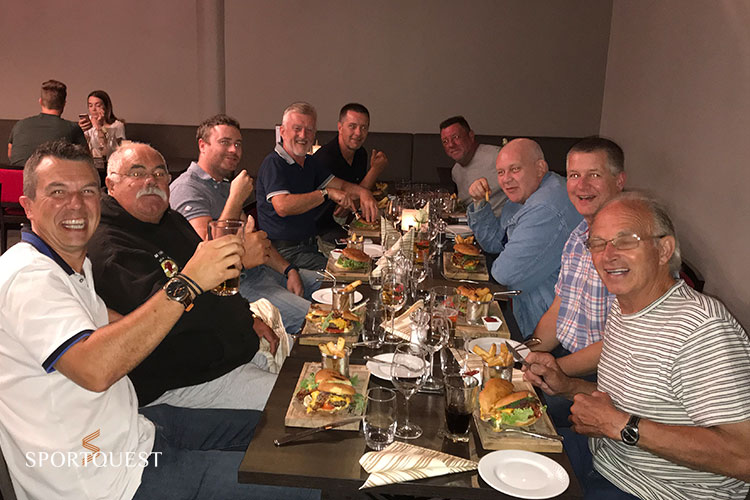 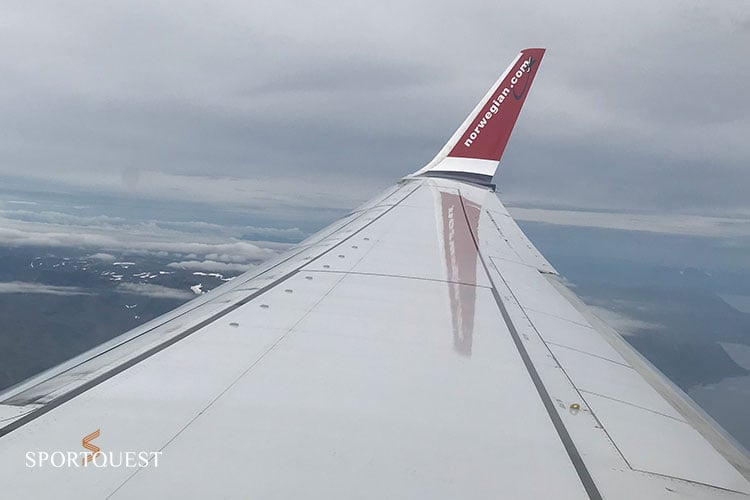 Once at the camp we placed our bags in our rooms and then made our way over to the welcome induction by our guide Douglas, this covers everything from the operation of your boat to the care of the fish, it was really well explained with a lot of information to take in but all the anglers left with a better understanding of the whole operation surrounding the Halibut fishing at Havoysund. That night was spent preparing the rigs, rods and tackle for the next day out on the boats, an air of anticipation filled the cabins…. How was it going to fish in the coming week… we were about to find out. 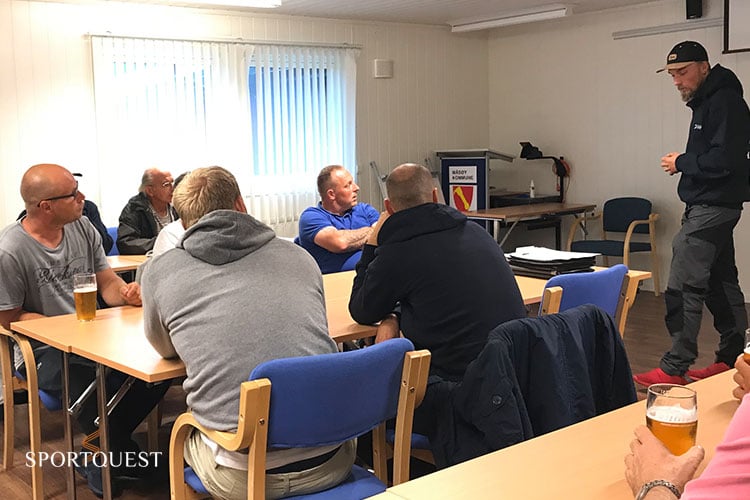 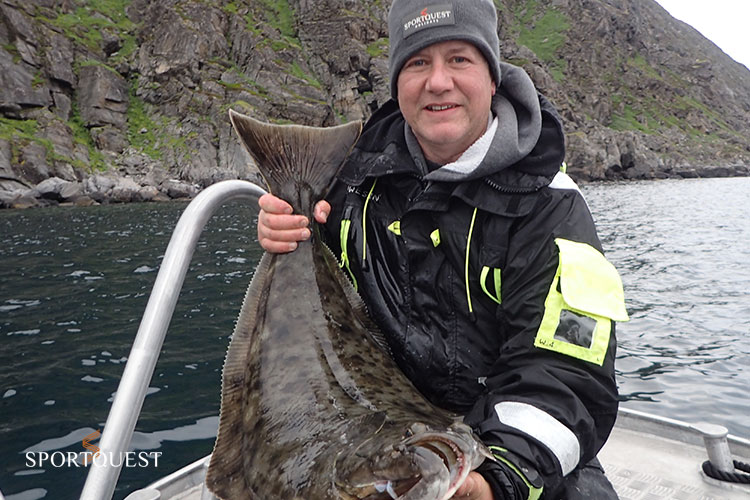 We awoke on the Friday morning and after filling ourselves on the breakfast that is included in the holiday price we were all soon on the boats ready to go and do battle on the surrounding seas with these prehistoric looking flatfish. Tactics were pretty plain and simple we could either lure fish for them using shad’s or use dead bait rigs, with most people choosing to go for the bait option where coal fish would be the flavour of the week. The weather on the first fishing day was pretty good with calm waters and bright skies, the fish reacted well to these conditions with Halibut being caught on both bait fish and shads, with fish up to around the 70lb mark it was a great start and both boats returned to the harbour in the late night sun light with banter flowing between the guests about who had caught the most and who was going to take the biggest fish prize at the end of the week. 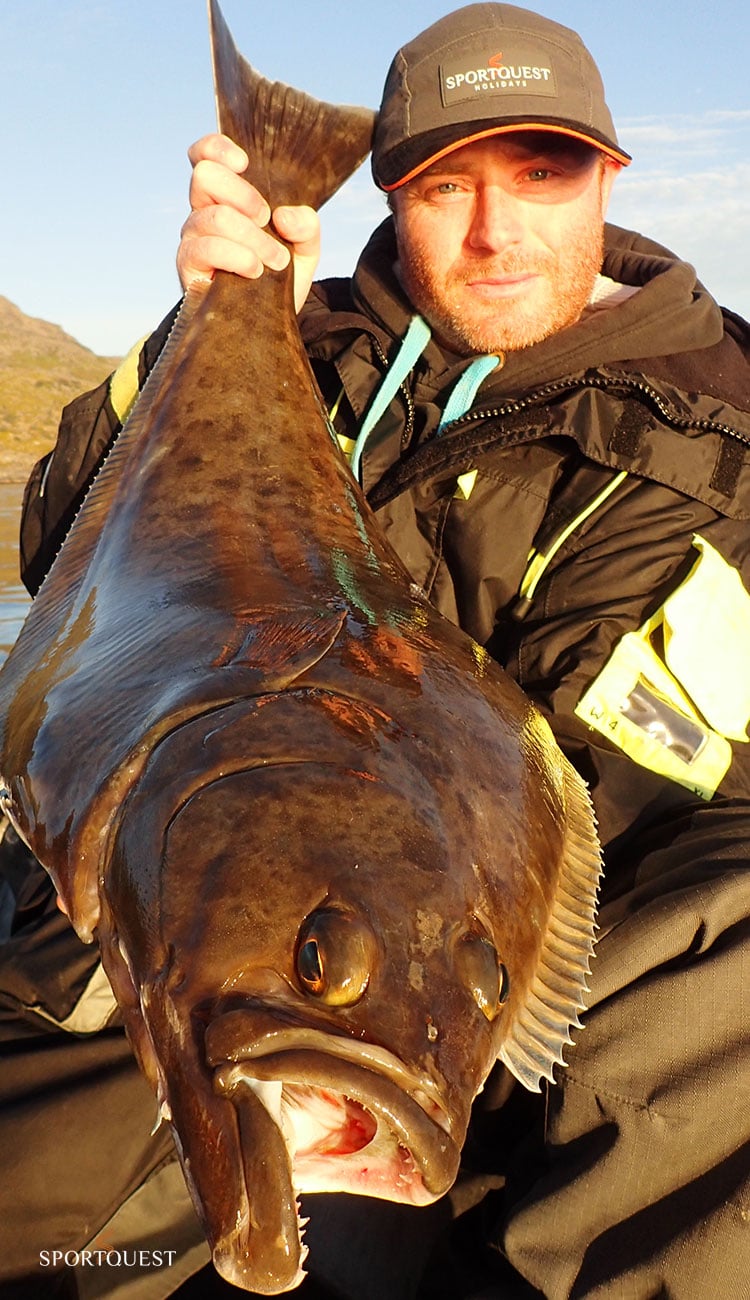 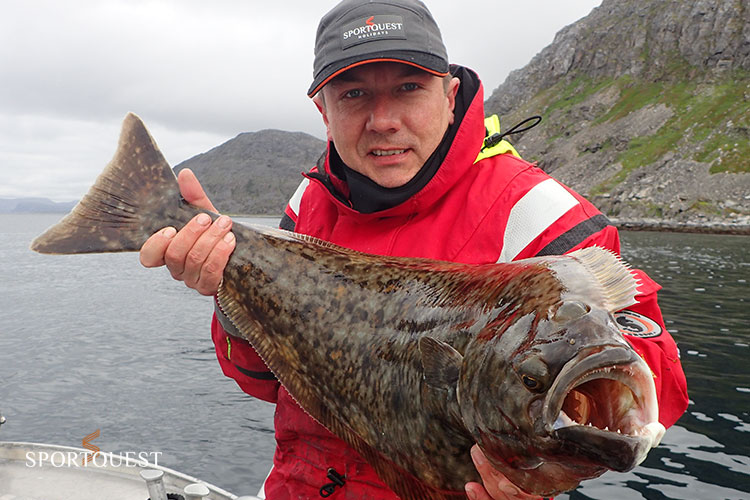 The next few days flew by with a mixture of good and bad weather sometimes restricting us to  where we could fish but we still found the jumbo flatfish, there were pockets of Halibut around the area, once we found them on the drift we were all getting some great sport with many fish coming to the float. Not many people have heard of this method, float fishing for Halibut sounds like a dark art but it is in fact very very simple and extremely effective, wether this was down to the bait being further away from the boat we will never know but it most certainly works. 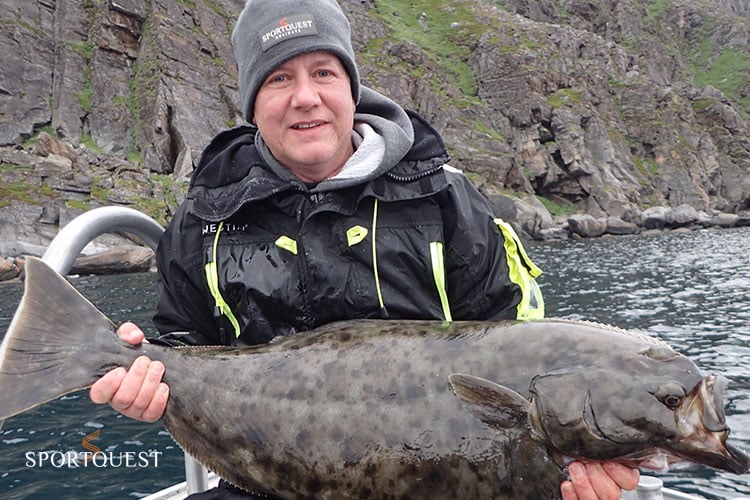 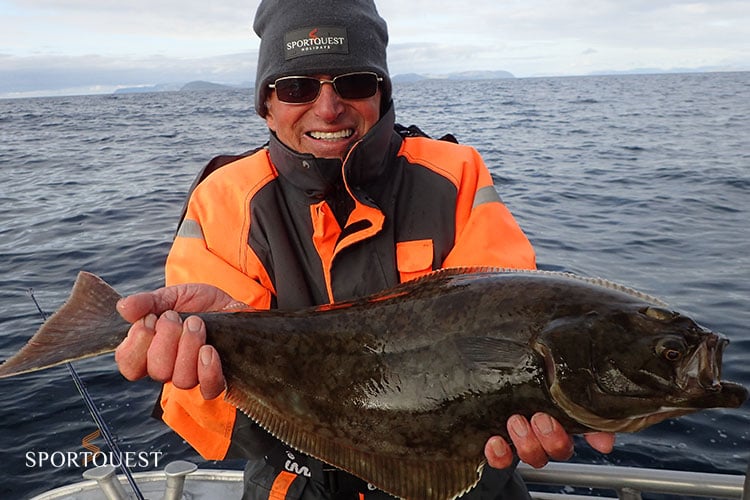 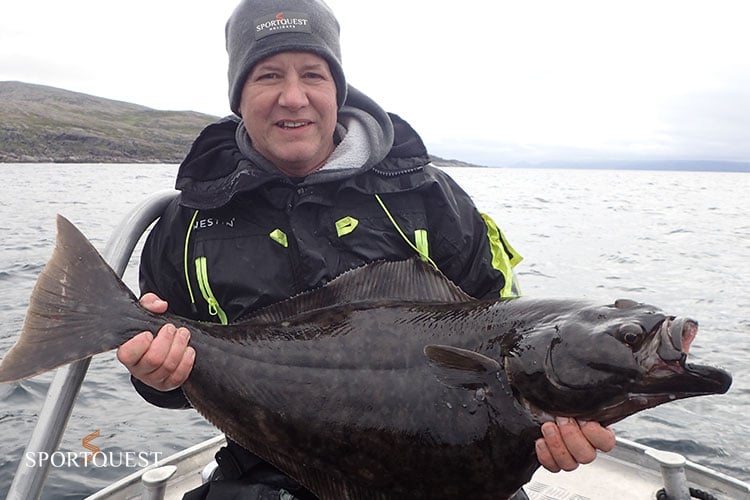 Towards the end of the week we hatched a plan to take the boats on an hour plus jaunt across to southern Havoysund to have a little hunt around there, this proved to be quite a fruitful trip with a lot of smaller Halibut being caught along with Cod, Haddock and lots of Lumb… We named one area Lumb alley, we drifted through this area a few times, always hitting these slimy Ling like fish to start with and then once the bites from these stopped we were into the Halibut, it appeared to be a flatfish holding area with a big Plaice also taking a liking to the pirk being hooked in the mouth fair and square. 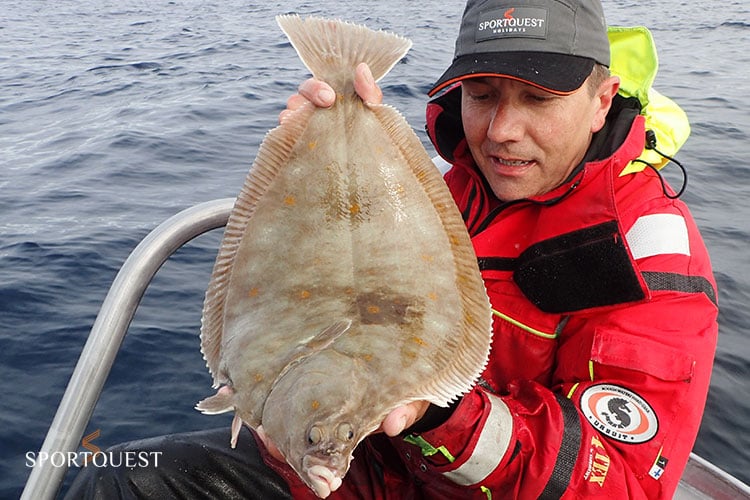 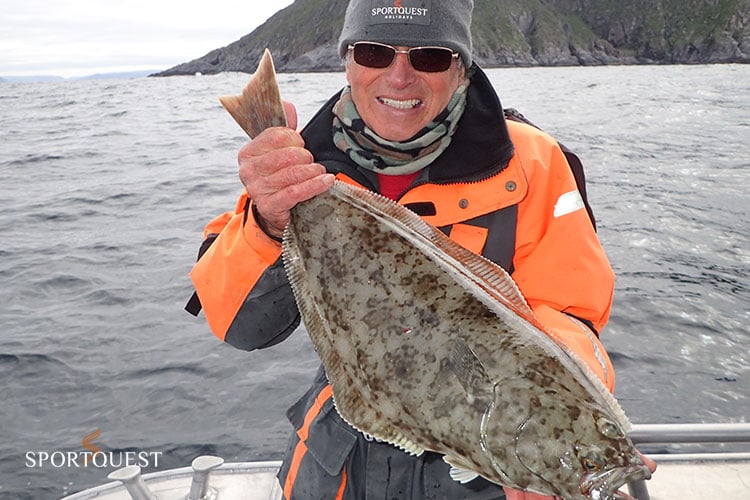 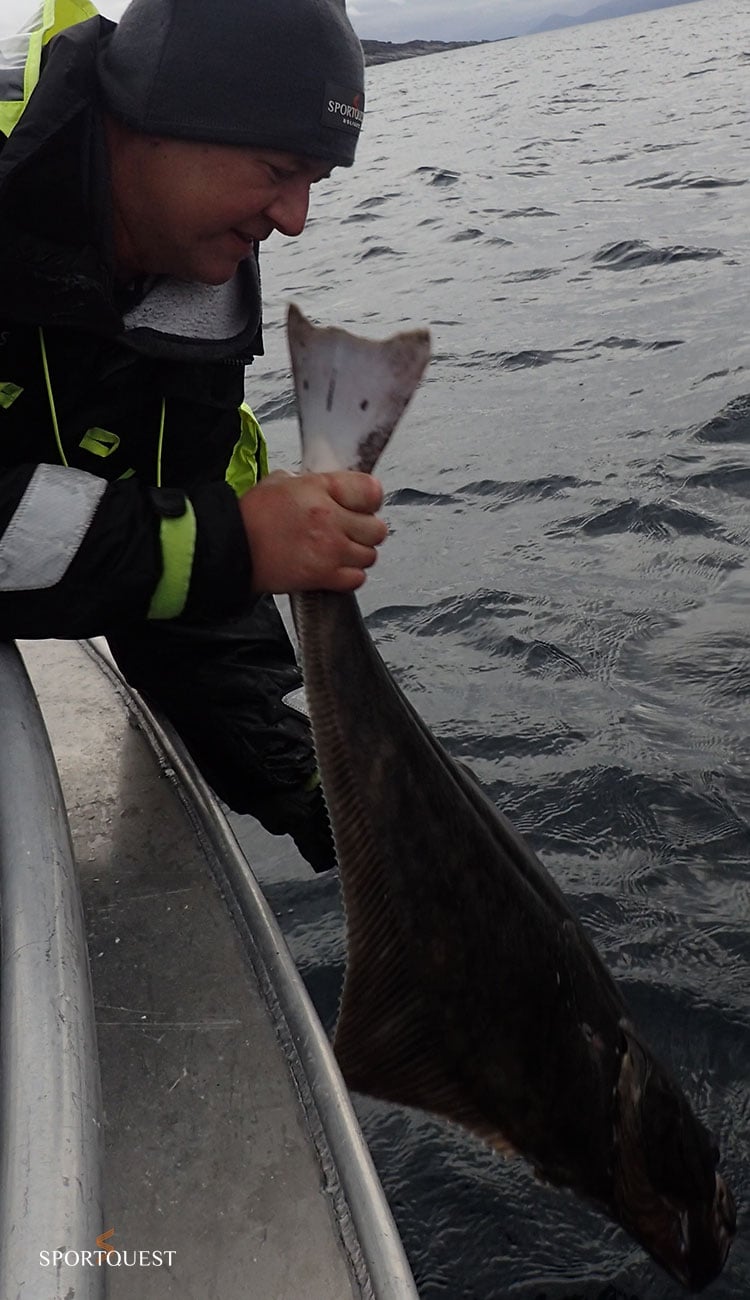 With the end of the week drawing near we had caught some great Halibut to all our boats and the other English guests at the camp had also had some cracking fish to just under 100lb in theirs, we still had not caught the monster we all wanted yet though so on the very last day it was decided we would go to a completely new area, one we had not even drifted over in the past week…. could this be the area the monsters were hiding. We put out extra rods today to increase the chances of a hook up,  if a run was too occur then it would be handed over depending on who’s turn it was in the hot seat. After a few hours drifting with only one small Halibut succumbing to the baits it was decided we would have one last drift before we had to make our way back to the camp to clean the boats and get ready for the journey home. The concentration was etched on everybody’s face, we were all waiting for our dead baits to be hit. With a screaming ratchet the fish took off and the rod was passed over to the lucky customer who just happened to be Andy, the next 40 minutes he was certainly placed into the pain locker with what was obviously a very big fish on the end of the line. With an audience  surrounding him we finally saw colour appear through the water and a massive jurassic beast was soon on the surface, after being expertly secured by Paul we measured the fish at 175cm which is roughly 170lb!!! What a fish to finish the holiday off and on the very last drift as well. 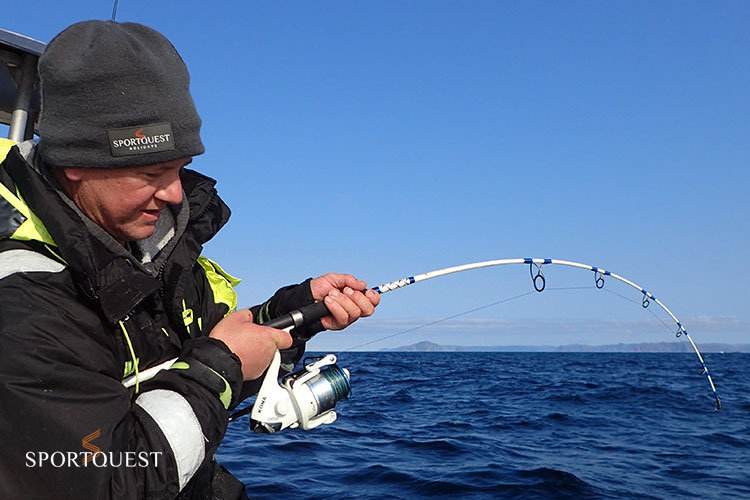 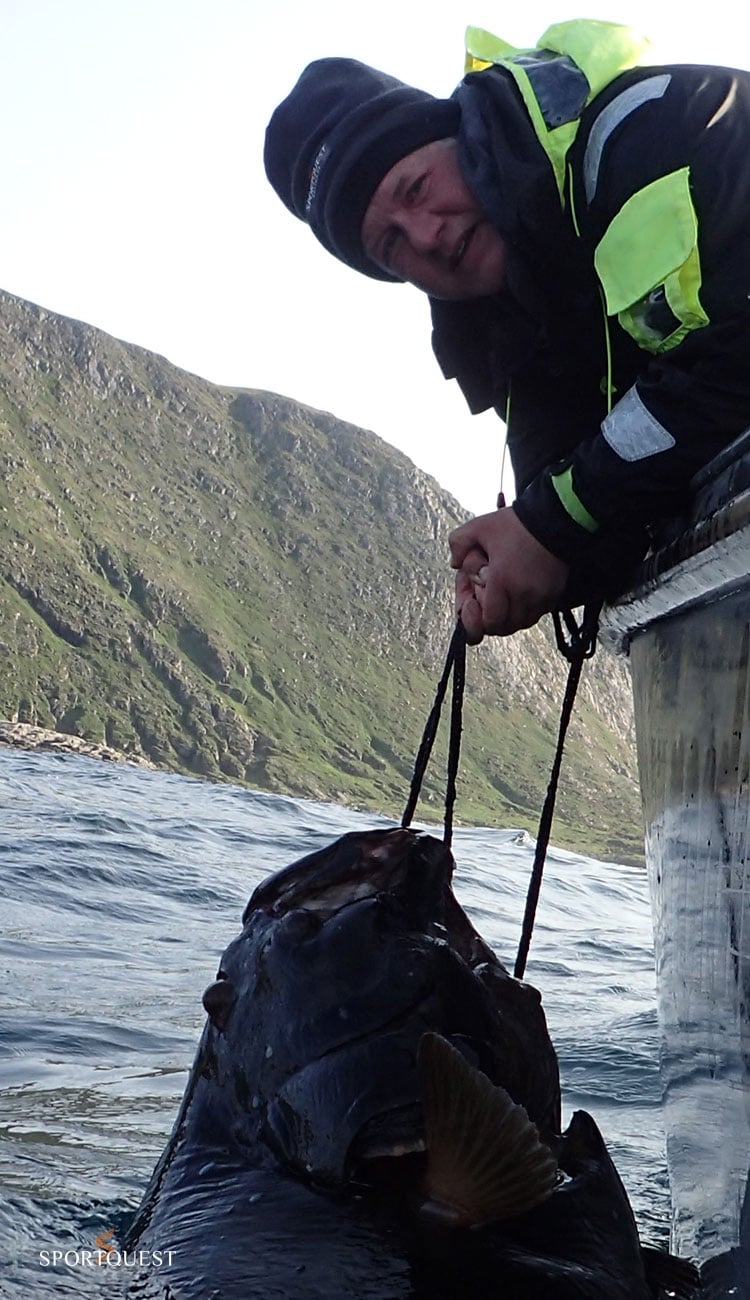 That night we dined over in the restaurant on the camp and had one final meal together followed by a couple of games of pool and that was it, the Hosted Havoysund Halibut trip of 2018 had come to an end. We had one final coach journey the next day to the airport followed by 2 flights to get back to UK and we were then back home. 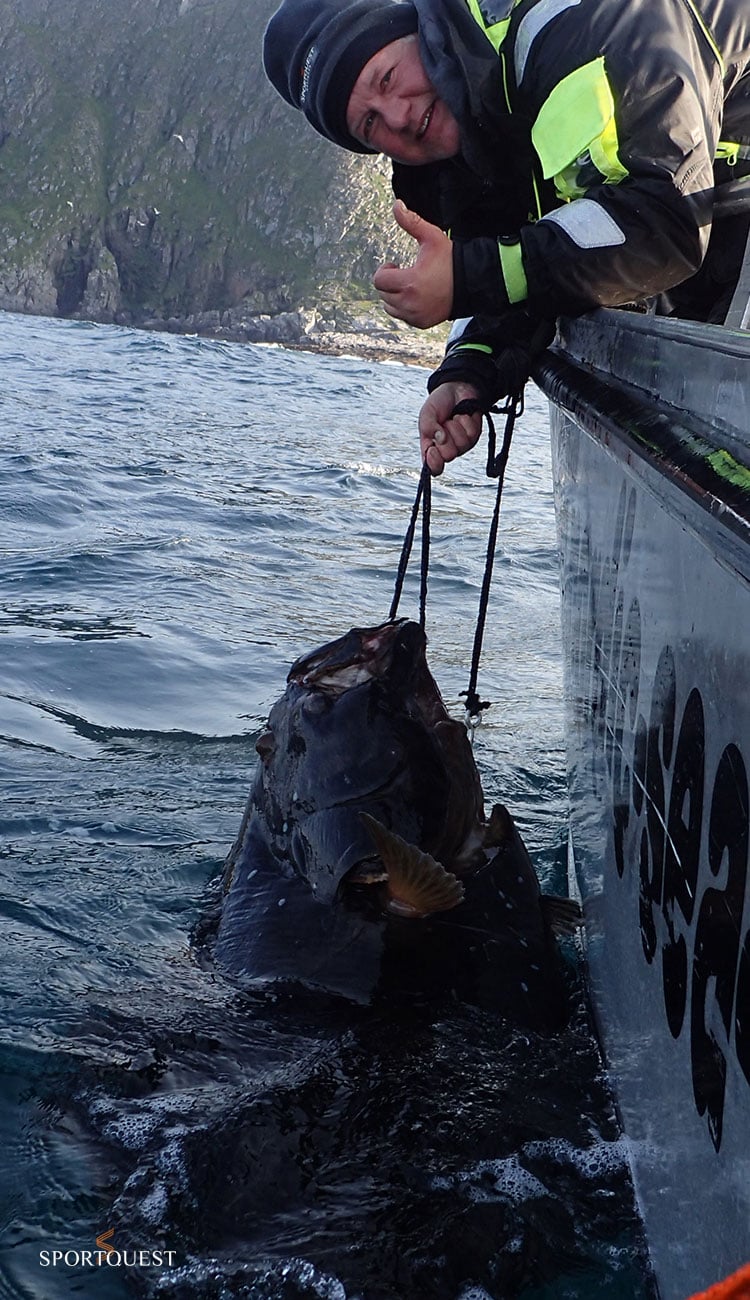 What a holiday, the customers all had an amazing time with some cracking fish being caught, why not get out to Havoysund yourselves in either 2019 or 2020 on our HOSTED trips where you too could well be doing battle with some complete monsters of the sea. 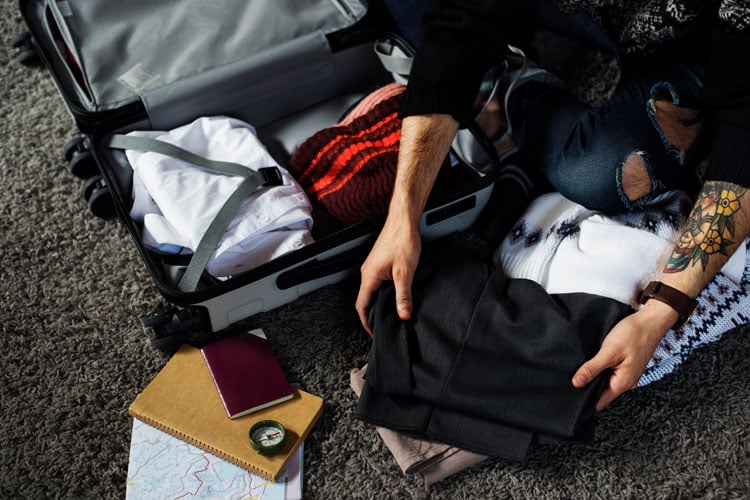