With the past 3 days a distant memory, it was time to concentrate on the last two days fishing and we were going to work the guys very hard for both these days trying to make them forget about the lost days fishing.

I woke up to the sound of many different alarm ring tones all set for around 5am and to everyone’s delight there was no sound of wind rushing past the cabins. It was on, so with everyone rushing around trying to make lunch have breakfast and get their stuff together, it was like a mad house so I just stepped outside and let them get on with it. Outside the cabin was like a different place to the day before with bright sunshine no snow and just the smallest amount of a breeze, simply perfect. The sea looked a little choppy but nothing compared to yesterday as you will of seen in my last Norway Fishing Report. 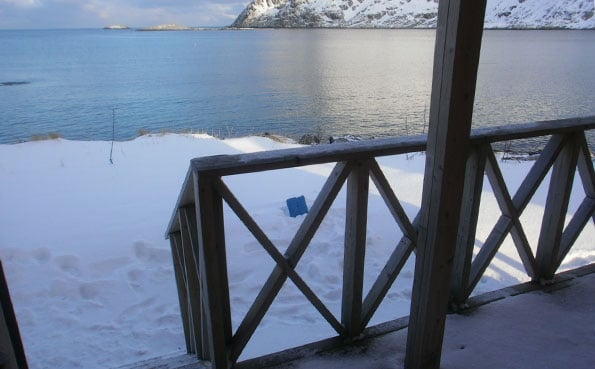 The sea around Norway is very different to the English coast, in Norway if they get a storm the sea can calm down within a couple of hours where if we get a storm around our coast you may as well forget it for a couple of days

After finishing yesterdays Norway Fishing Report I could see the guys starting to put there thermals on so it was looking like we were off soon so I thought I better get my gear on and make our way down to the boats. We were the first group of anglers down at the boats and you got a good idea of how much snow had fallen just over night baring in mind we had bought the boats back at around 4pm yesterday and they didn’t have any snow in. So with all the snow shovelled out it was time to climb aboard and go and hunt some Cod 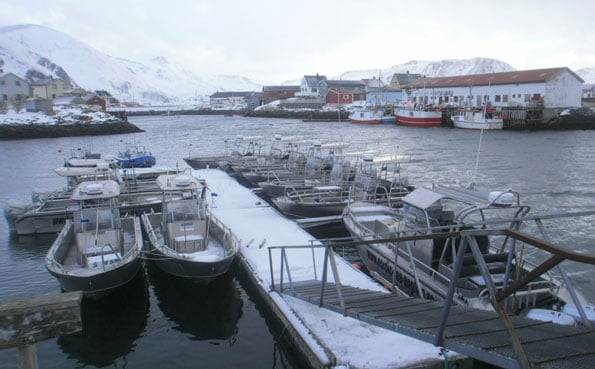 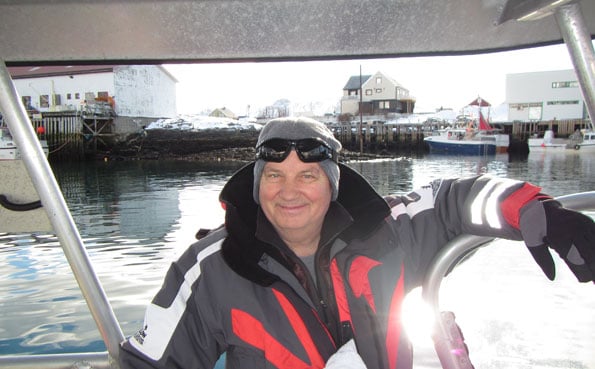 The Sea was still a little choppy so I took it a bit easy on the guys and went out half speed. We were soon at the fishing grounds and the guys were already up with rods in hands waving big bob’s in the air, “What depth, what depth” they shouted. 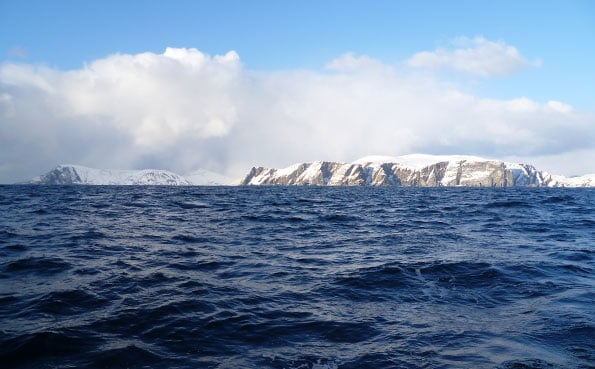 A couple of minutes later I had found some good-sized fish and they were as high as 45mtrs in the water, meaning they were feeding hard. So a shout of 45mtrs went out and 3 very keen anglers raced each other to the fish. Then whack, every one was in all at pretty much the same time, this was going to be a good day 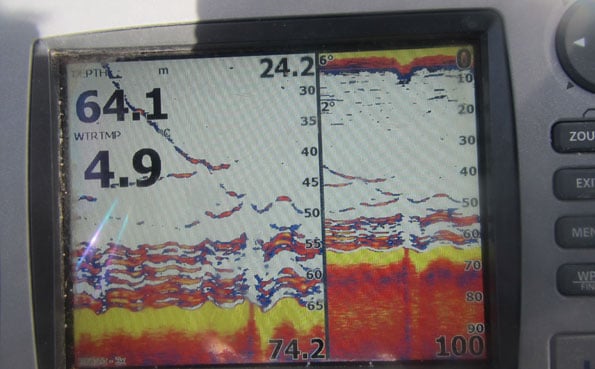 First few fish were just under 20 kilo’s still excellent Cod but just average for Soroya, I just knew there were better down there and it was just a matter of moving about until we found big fish. So with this in mind I said, “reel up we are going to move” the guys looked at me as if to say, Why? We are catching here…. I was so focused on getting a big fish today that I would not give up and not stop moving until we had found them. After about 5 or 6 moves and a few hours later I eventually found what appeared to be some big fish, “Right that will do, 55mtrs down there are some big fish” so down they went. Mathew all day had been fairly quiet and wasn’t really catching much and there was nothing he was doing wrong just not his day, well that was the case until he struck into what looked like a half tidy fish. 10 minutes later and Mathew had landed what I thought was by far the biggest fish of the trip all I said was “Look at the size of that” Now I have seen a few cod in my time and also some big cod, but this was in a different league, it was just so long. Mathew and I both worked together to get this huge fish aboard and once we both hauled it in we just stood there with our mouths open staring at the fish that lay at our feet…… it took me a couple of seconds to remember what to do! “Right, lets unhook her and weigh her straight away” it had to be nearly 40 kilo’s but to my surprise it went 34 kilo I couldn’t believe it….. If it had a belly full of spawn it would have been over 40 kilo. Luckily I hadn’t said anything about what I thought it had weighed so managed to get away with it, still a massive fish and Mathew was made up, saying to me “that is the biggest fish I have ever caught” I just love hearing that, that is what I get my buzz from, not necessarily catching fish but from the joy I can bring to my guys faces. Well done Mathew, but unfortunately it isn’t the biggest fish of the week that 35kilo one still stands…… that was in my previous Norway Fishing Report 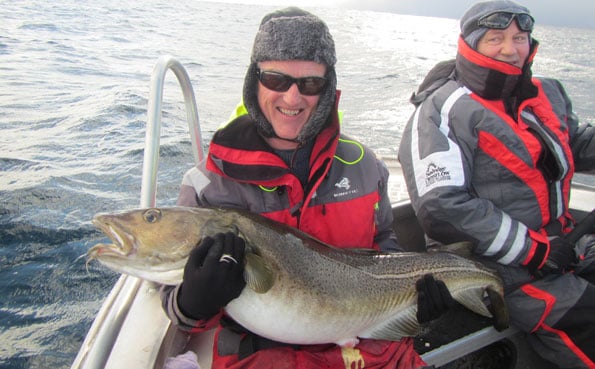 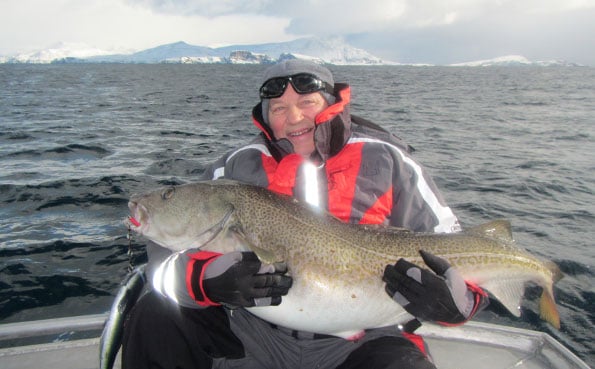 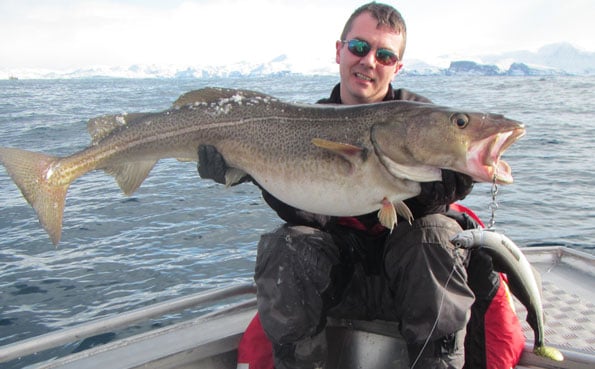 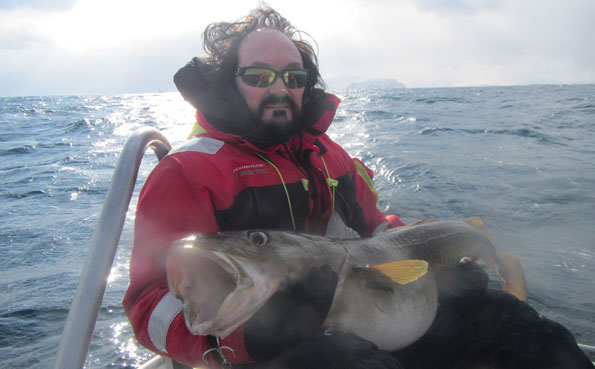 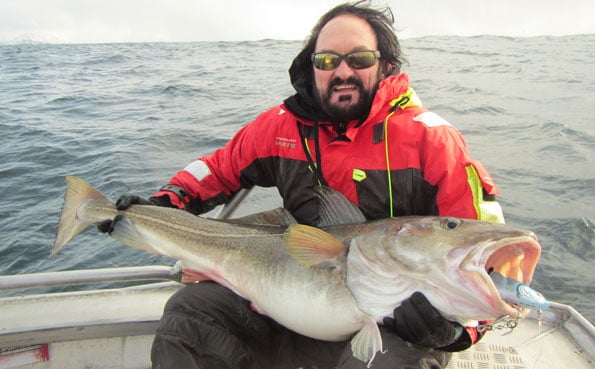 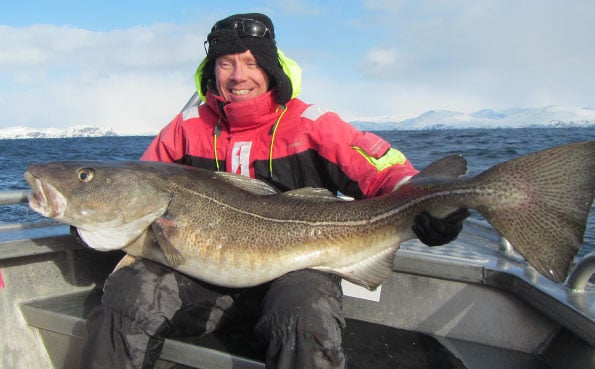 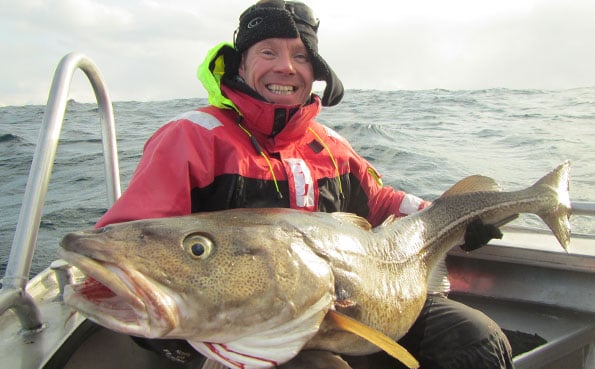 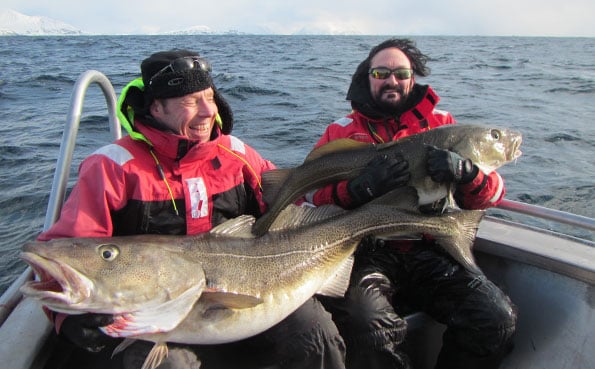 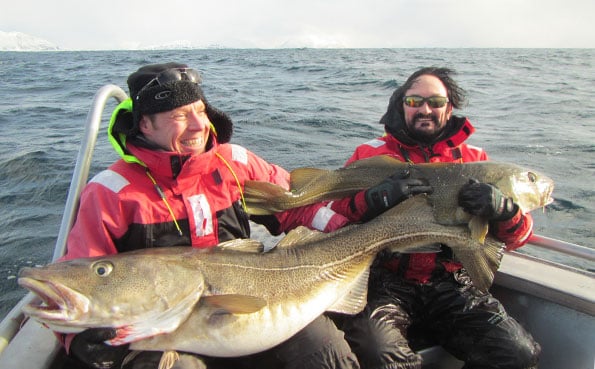 We all just sat there for a while and took 5 minutes and chatted for a bit and took the stunning scenery in. This place does take your breath away sometimes and you forget where you are until you see the back drop, its simply an amazing place and is almost like a second home to me 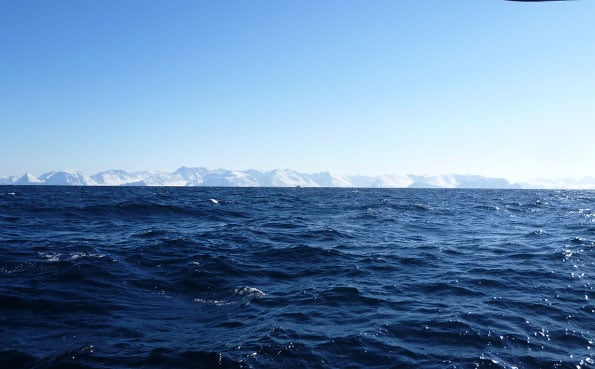 Back to the task in hand, it was getting late now and the guys were looking a bit tired and the jigging action was getting a bit slower so I set up for one last drift to see what we could end the day on. I forgot to mention that the other boat had gone in hours ago as they were tired but after spending nearly 3 days in the cabins I was not just about to let the guys go in early

After a few more cod, time to go in as it was getting dark so it was throttle down and homeward bound. After just 15 minutes we found ourselves back at the harbour where all the others were waiting for us to congratulate Mathew on his fish 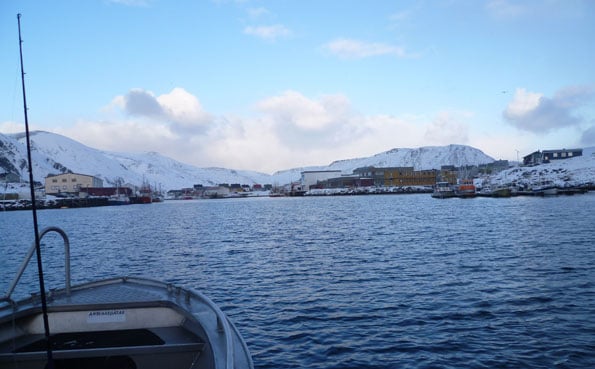 With all the hand shakes done it was time for some dinner and a nice cold beer and for Mathew to take us all down the pub as this is the tradition for someone who catches a 30kilo cod….. well actually that is a lie, the proper tradition at this camp for a 30 kilo cod or a 50 kilo Halibut is to take a swim in just your under pants!!!! I have never found an English person that will do this, Germans, Polish and Swedish, yes they all do it but not the English……. I guess a beer will do 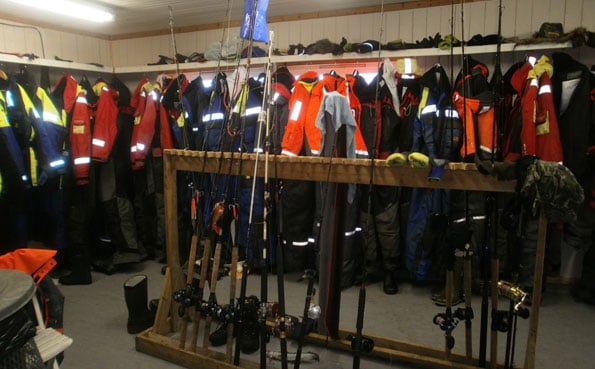 So with a group of tired anglers it was early to bed as tomorrow was going to be even better weather with absolutely no wind, so it was going to be a long day again but this time we would go out early and get back at about 4pm as the fishing guys have got to clean the boats and refuel. Once this is done then it’s packing and up the pub for 8pm for the last fair well meal. Until then, tight lines 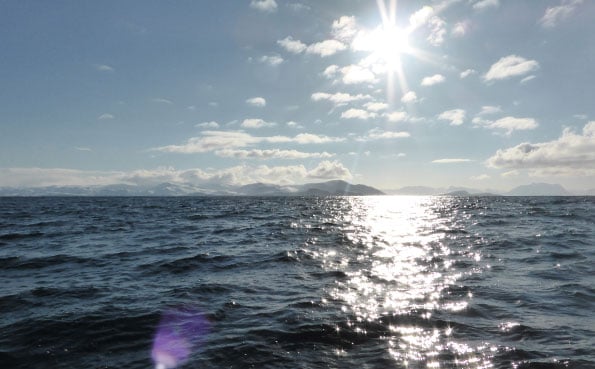