With so many of you guys either travelling to Å on the Lofoten Islands or counting down the days before your holiday, we thought you would like to see how the fishing is going and by the looks of it the anglers there this week are having the best time.

Å on the Lofoten Islands is one of our most popular destinations as the fishing is first class and it’s not just the Halibut and Coalfish, the Cod fishing is fantastic and also the Plaice fishing is unreal.

“We are taking bookings for 2018 so act quickly”

The below report has been sent to us from Nordic Sea Angling guides André Starkenberg and Alexander Lindgren and hope you guys enjoy reading it:

The new groups on Å were ready Thursday morning loaded with tons of brand new fishing tackle. Many groups went out early to start the day with Halibut.

There were several nice Halibut landed over the meter in the morning and then later in the afternoon the Halibut fishing died off. The groups then concentrated more on cod and Coalfish. Several fine cods were landed between 10-15 kg where the top fish were just under 20 kg. 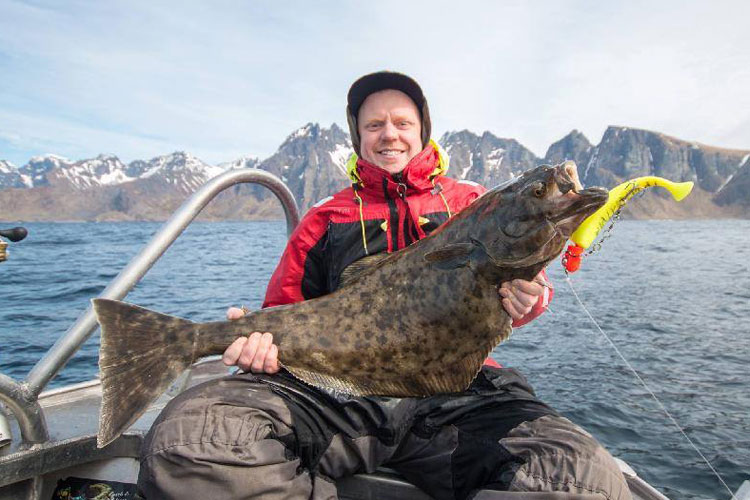 Friday began with several of the groups having a sleep in and waited for the slightly stronger winds that had been during the night. At 10 o’clock, most people went out with halibut in sight. Guide André drove out in each of the boats that left the harbour about 10:30 and we were also looking for halibut.

The fish started quite slow but picked up after lunch. We landed the first Halibut in the guide boat in today’s second drift. Just when we released it we hear several reports of the VHF that Halibut started biting for several other boats in the area and boats to the right and left were hooked up. We all fish further when we receive a further report immediately after a group has drilled a fish for a long time but could not lift it from the bottom. 20 minutes further and the result we hear is that the boys in boat 2 have just managed to land a true dream Halibut of 170 cm. 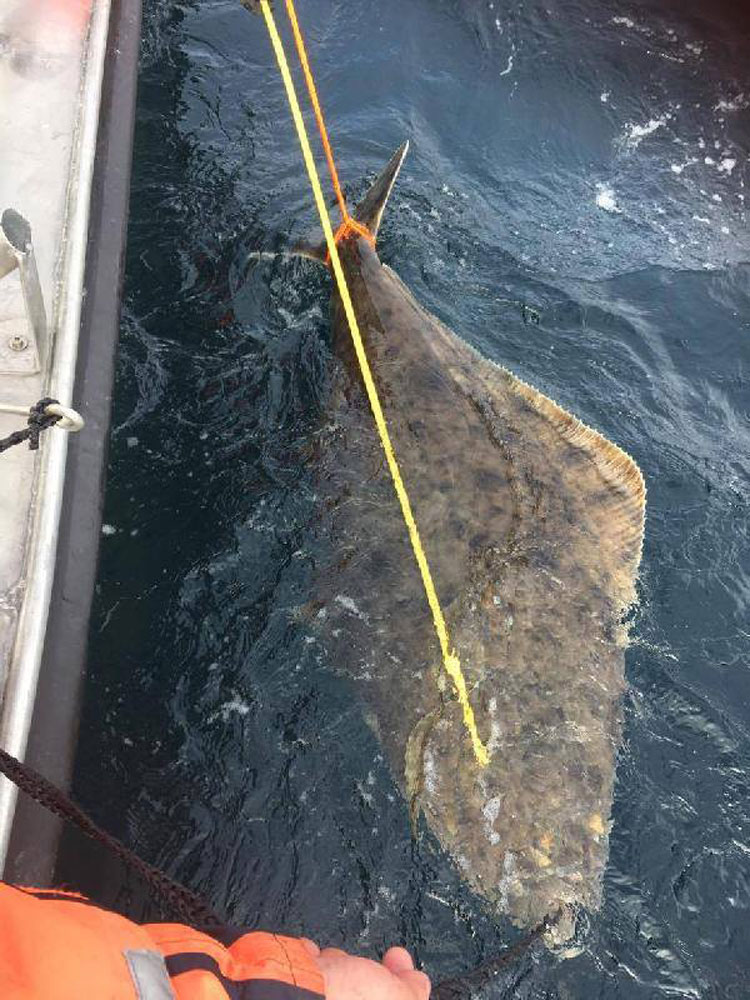 We in the guided boat are working properly after this report and decide to make a small move. We put up the boat and lower our jigs and work the fish. I lower my “Crazy Daisy” into the water and then see that Hasse behind me has a fish on. I quickly put the rod in the holder, go and assist the landing of a smaller cod. Then I turn around and see that my pole stands and bends against the water surface. I transfer my rod to one of the guests in the boat André, who has not yet managed to catch a Halibut for the week, to take the fight and after a quick battle the victory went to André and a flounder of 119 cm was now landed. 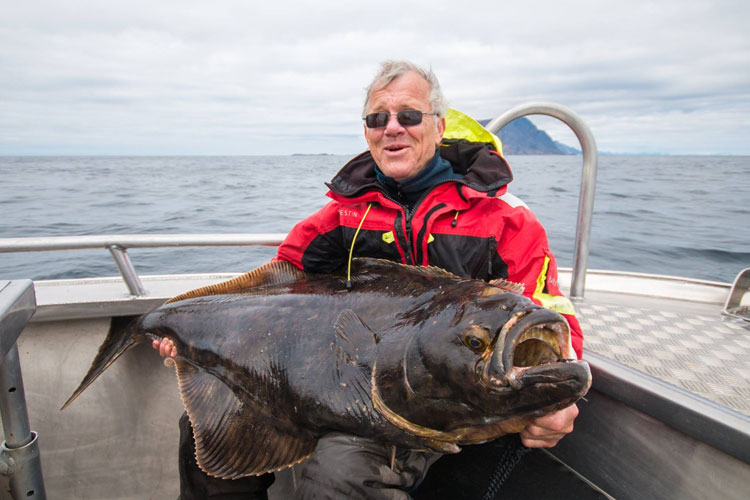 Just minutes after this fight, Hasse says in the boat that – “there is something chewing on the lure down here” and then the wine starts to roll and the fish goes off. Everybody else in the boat starts to wake up and we drive a bit after the fish before we can start trying to lift it from the depths but just meters above the bottom, the fish unfortunately disappears completely.

Guide André and his group fished for good results and had a good result. Coalfish offered real fun fishing where the guests stood several times and drilled nice fish between 10-13kg at the same time. 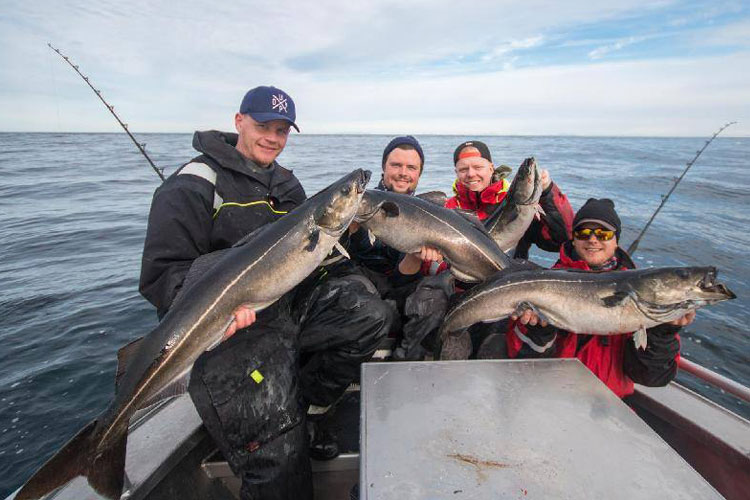 The last two days have begun weak winds, and most of the boats have been looking for Halibut.

During Saturday, most boats managed well with their fishing with many landed Halibut. We in the guide boat went south to try out some places that have been sparingly fished this season. The day rolled out with the majority of fine cods but the goal of the day, the Halibut.

Around lunch we drove north to an area that delivered well the past week. Already in the first operation, something sucks in Eric’s lure and a few seconds later the rod is in a beautiful bow. After a couple of minutes of struggle we can secure today’s first flounder of a fine 112 cm. So down went the lures again and we continue on the same operation and it takes no more than a couple of minutes before Hasse says “now I have one!” Another great fight begins and Hasse squeezes the fish for a few minutes before we see the fish in depth, that’s a nice fish! The fish is landed and measured to 138 cm, and after a couple of quick pictures it gets the freedom again. We then have a couple of good contacts thereafter but the Halibut do not want to follow all the way up.

The Sunday forecast showed similar weather conditions as the previous day. Like Saturday, the sight was set to Halibut for most of the boats. Alexander steered the boat south with the gang in boat 3 towards the same area as we used in the guided boat the day before, with clear results on the Halibut.

We in the guided boat made the opposite and steered north and already on the first run Hasse hooks a 97 cm flounder. Shortly after the time when Eric rejoiced today’s second Halibut, a happy Alexander calls on the radio that Per just landed a real dream fish! In today’s second operation at a depth of 60 meters, some bite starts on Persberred fish. After a couple of seconds, the fish goes off at an awkward speed. Per puts a good bend in his rod and the fight is on the go! After about 15 minutes of sweaty and shaking legs, Alexander can put the halibut in the lower jaw and Pers new PB is secured. The beauty is measured to glorious 165 cm and the catcher jumps into the water for a whirlpool! After some pictures, the Halibut can slide back into the depths. 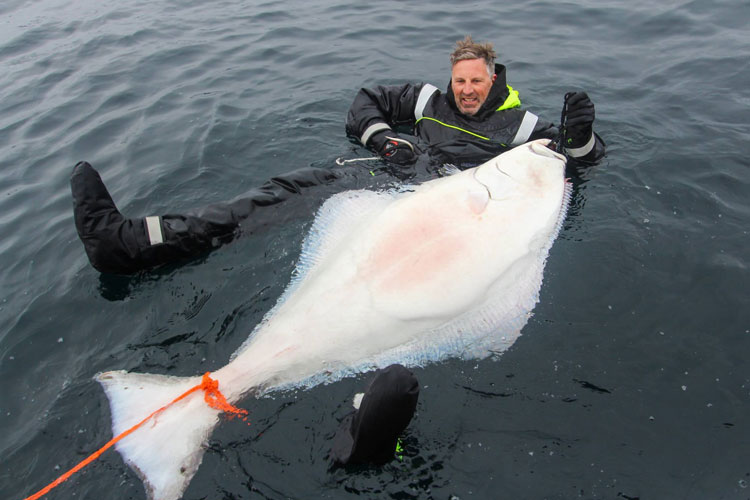 Now the groups for the remaining days are loading here on Å!

Thanks guys for taking the time to write us a report, I know how busy you guys must be. If you would like to read the holiday details with many more reports and available dates simply CLICK HERE