Well what an amazing first day for the hosted Sportquest Skrei Cod trip to Mefjord Brygge. After arriving late into the night the previous day all the anglers had a lovely sleep and woke up full of anticipation for the days cod fishing that lay ahead. Unfortunately the wind had other ideas holding us back from getting out onto the water until midday when it dropped just enough to allow us to venture out of the fjord. With the boats laden up we were off, like a fast moving flotilla of cod hungry anglers we powered up the fjord and out into the open sea. What we would find out there was unknown to anybody, would the cod be there, would they be hungry…..we were about to find out.

All the anglers had soon sent their Big Bob shads into the crystal clear waters with Paul watching the fish finders and calling out the depths he could see the fish at, and it wasn’t long before the rods were hooped over playing the angry dance of the Skrei Cod!! To start with the fish were averaging around the 20lb marker but then Marc’s rod violently smashed over and he was into something a bit more special, after a spirited tussle a monstrous 50lber was soon slid over the gun rails and one very happy angler was the result. 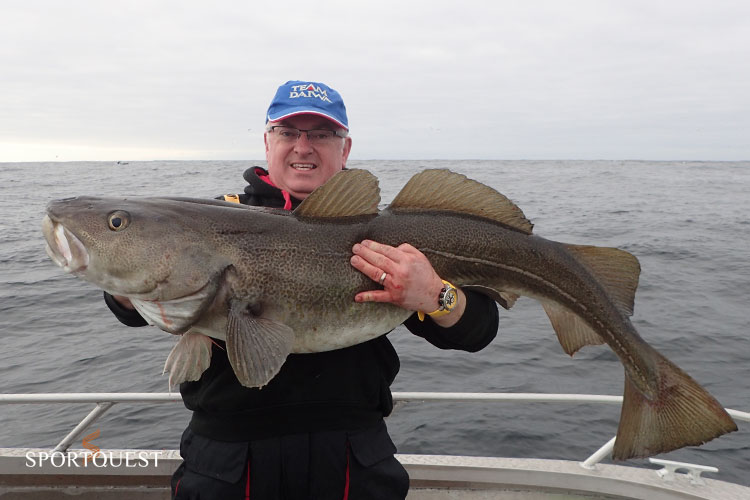 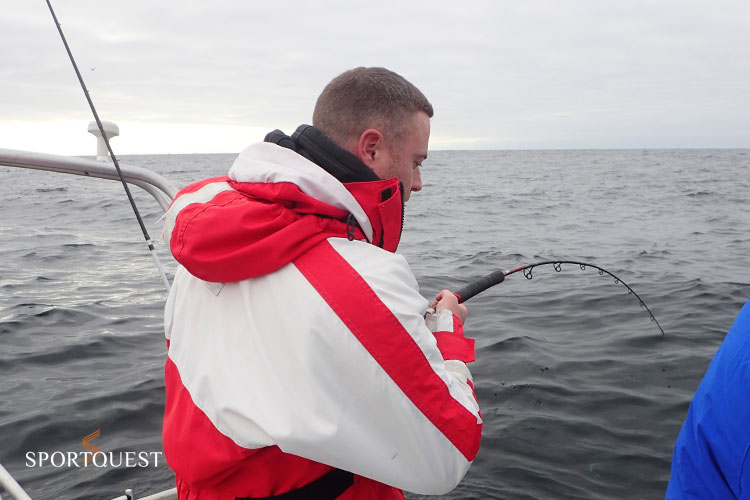 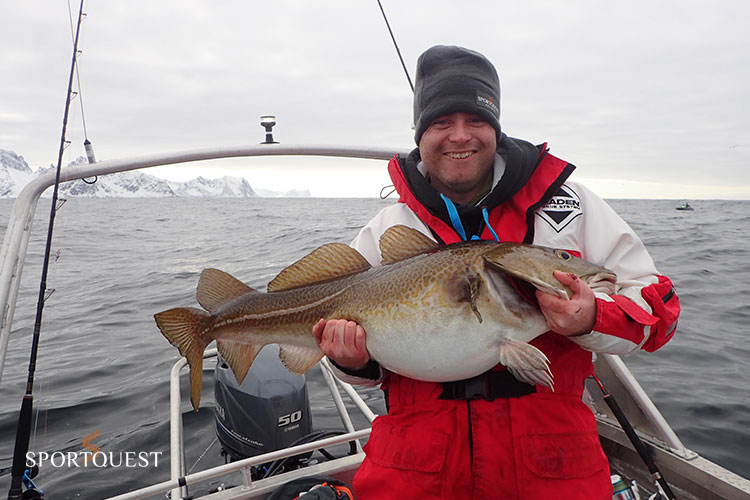 As the afternoon drew on we had the privilege of being surrounded by both humpback and pilot whales as they feasted on the rich seas we were fishing in. As the day drew on Paul did a brilliant job of hunting the shoals of Cod down, as one spot started to become a bit quiet we were soon on the move until we found the next shoal and we were into fish again. 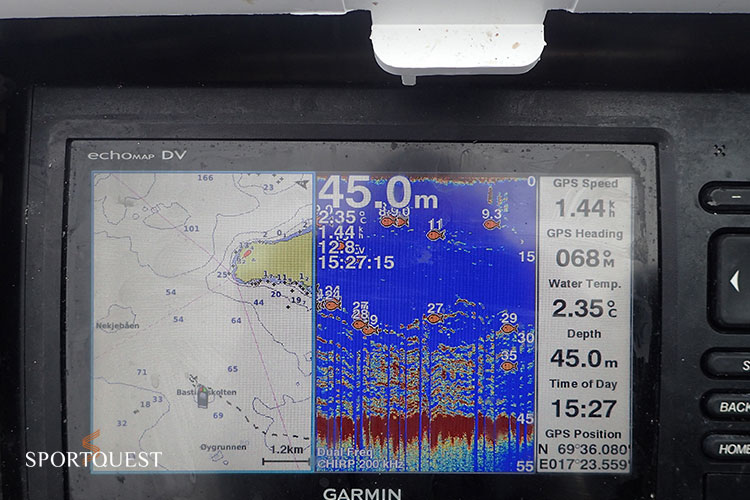 As the day was nearing an end we could see the other boat fishing with us was into something special so we wound in the shads and popped over to have a look, what we saw was Nick sat at the front of the boat cradling an absolute zoo creature of a cod, what a monster and going 65lb’s on the scales is any anglers dream catch. As the tide carried on ebbing the fishing dropped off and we decided to call it a day, and as I am using this trip as a tutorial for my future hosted Skrei Cod trips I had the fun job of taking the boat from the sea back into the harbour. 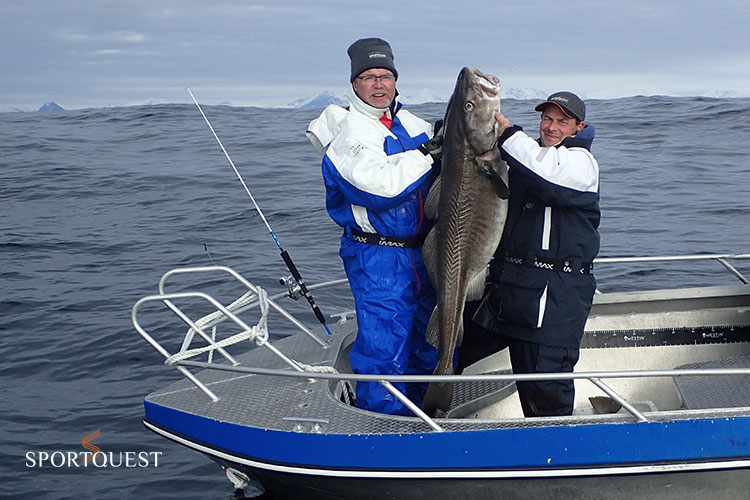 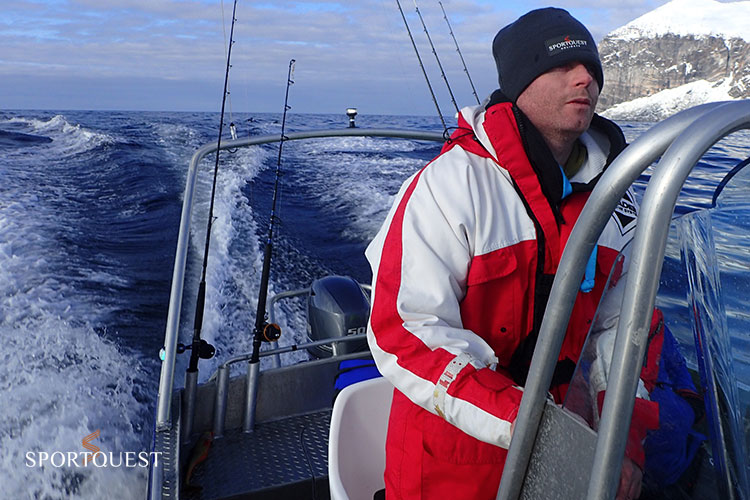 Once back on dry land rumours filtered through to us that another Sportquest customer on a separate boat had pulled in an even bigger fish than the ones we had caught. The rumours were true and it was James who had pulled CODZILLA out of the ocean weighing in at 70lb!! What a fish. Well that’s the first day over and we are all sitting down to dinner now, the fajita chicken and noodles is going to be ready any second so I will leave the first day there. Look out for tomorrows report up tomorrow night…..Will we see an even bigger cod to beat the 70lb zoo creature caught by James today???

If you are reading this and wanting to find out for yourself wha its really like then call our office on 01603 407596 and we can make your dreams come true. 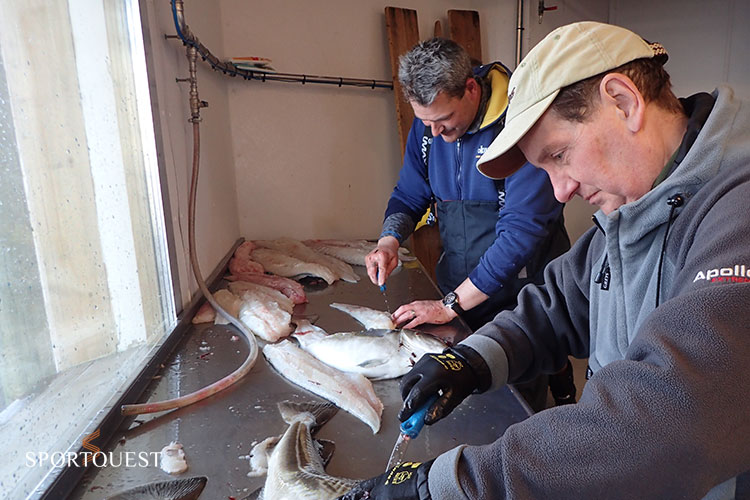 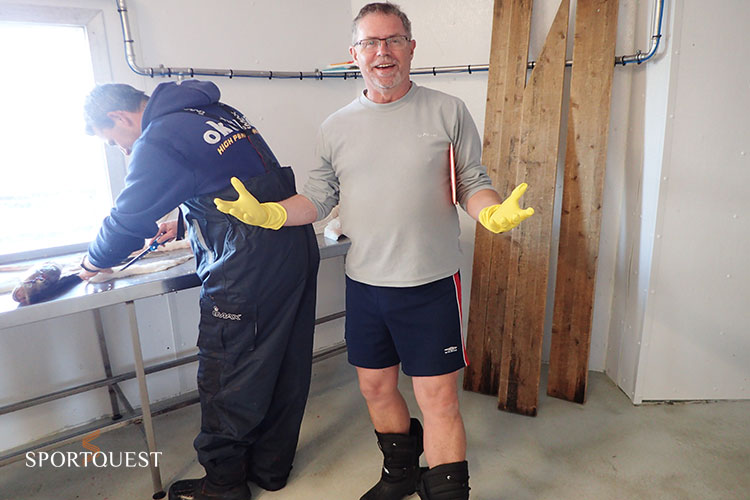