Costa Rica Not All About Fishing

If you are a follower of our fishing reports and articles, you may realise that we always report on the fishing side of locations as we believe that is what people want to hear.

Well this below report has been sent to us from the Fishing Director at Crocodile Bay, Todd Staley. He is one of the most passionate people you are likely to meet and once you have met him you will soon find yourself feeling like you have known each other for years!

“Perfect for the whole family with many eco tours onsite”

If you fancy taking your family to one of the best destinations and safest parts of the world then get in touch with us and we can put together a trip of a life time for you. Call our experts on 0044 (0) 1603 407596

Over to Todd Staley:

One of the most exciting days of fishing I ever had was in a lagoon in Nicaragua accessible only by passing through myriad rivers and creeks on the Caribbean side of Costa Rica. That day, Mike Holiday and I hooked more than 60 tarpon on casting plugs. We tired of tarpon and went to the beach to cast for snook. The tarpon wouldn’t leave us alone. We were hooking them from shore. I watched as Holiday played and eventually landed a respectable tarpon from the beach with a fly rod. That was nearly 20 years ago.

“What did I see that day? Fish, fish and more fish”

I fished that same lagoon many times over the years, and although I never matched that one fantastic day, I always had good fishing. Then, one day, the tropical rains had the lagoon all muddied up. I cast furiously for hours with memories of that fantastic day playing like a movie in my head. I had not one bite. I knew the next cast might be the one. It wasn’t. My arm tired of casting and I sat down to rest. I looked over toward the shoreline. Then it jumped out at me. A beautiful, fire-orange heliconia growing next to the riverbank. I scanned the shoreline. One after another, they rose from the jungle.

On the long fishless ride back into Costa Rica, I started to notice things I never saw before, even though I had traveled this road many times. Wild orchids hanging over the creeks, some of them humongous and all of them spectacular. There were so many different kinds. On all my previous trips, I had seen only water and fish. The normal trip back took one and a half hours; this day, it took me almost four hours. That was the day I learned it is not always about the fish.

I have had many similar experiences here on the Osa Peninsula. The waters off the Osa drops off fast. A couple of hundred yards off the beach, you’ll find a couple of hundred feet of water below your boat. By the time you reach 20 miles out, more than a mile of water separates you from the ocean floor. Most of the big game fishing is rarely done beyond 20 miles, unless green water forces the fleet farther out. Fishing the Pacific can be like living the Discovery Channel. 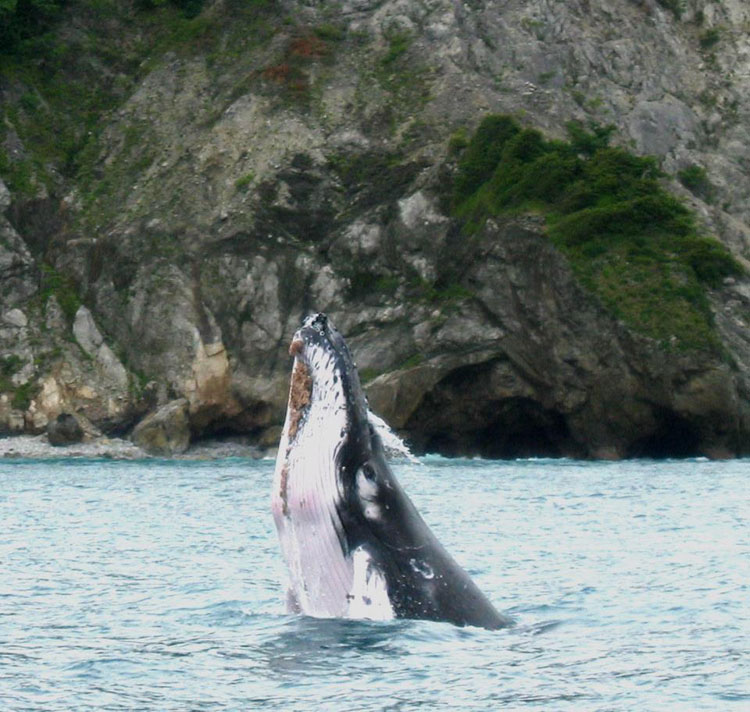 The humpback whales come twice a year, from the Northern Hemisphere in January and February, and again in August and September from the Southern Hemisphere. I have been lucky enough to see a pod of 50 or more migrating offshore to the south. Mothers will bring their calves into the Golfo Dulce, and when they are here, sighting them is almost a daily occurrence as they prepare their young for a long open water voyage. 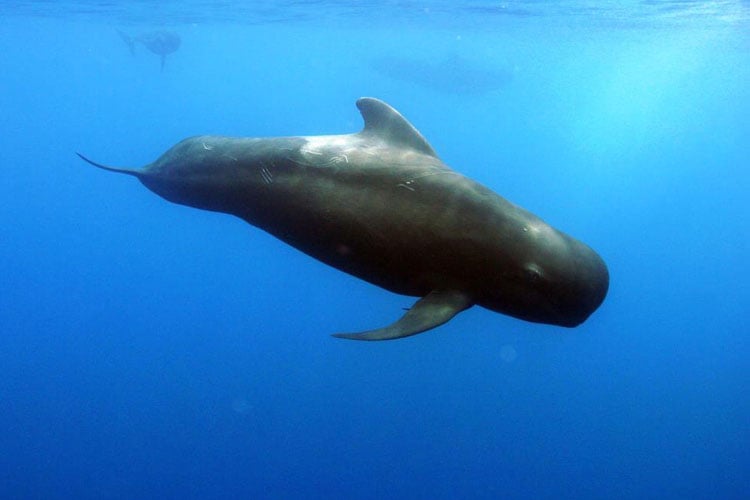 On another occasion, I was chatting with the guests below when the captain suddenly changed course. That is always a surefire sign that he has seen something. He pointed to the horizon, and there, way off in the distance, were silhouettes of something large jumping and making tremendous splashes. We were sure it was a huge school of very big tuna. As we got close enough to see what it was, it turned out to be a mammoth group of pilot whales. There were literally hundreds of them. As the boat got closer, they came over to check us out and began to swim alongside the boat the way porpoises do. We watched them for over an hour with not one tuna in sight.

I’ve seen killer whales here several times, usually about 10 miles off the beach. But once, three of them were headed up the coast only a few hundred yards off the coast. Mike Grace of Cummins Motors got the most spectacular shot of one as it raced in out of nowhere and began surfing the wake only inches off the transom. 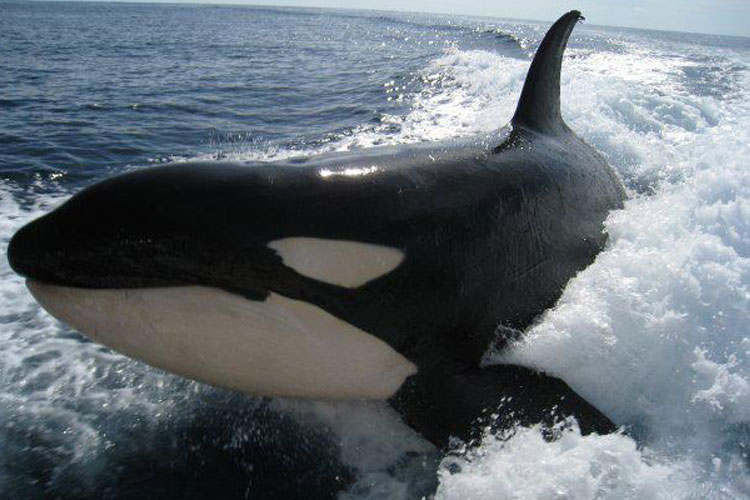 Huge pods of spinner dolphins are common offshore. They may travel in groups of 50 or fewer, or as many as a thousand. You can bet there will always beyellowfin tuna near them. The tuna might not always bite, but they will be there. 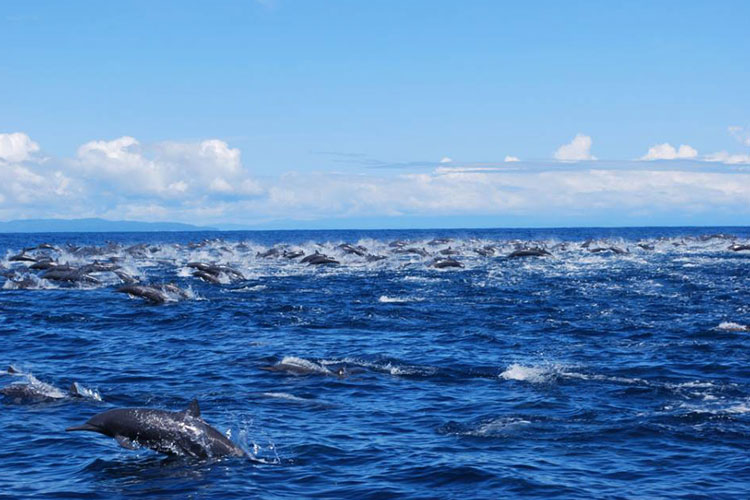 March and April are the best months to bump into whale sharks in the gulf. These gentle giants show up almost yearly and feed on plankton in the calm waters on the upper end of the gulf. The most I’ve seen at one time is eight. They are not fully mature and average about 30 feet long 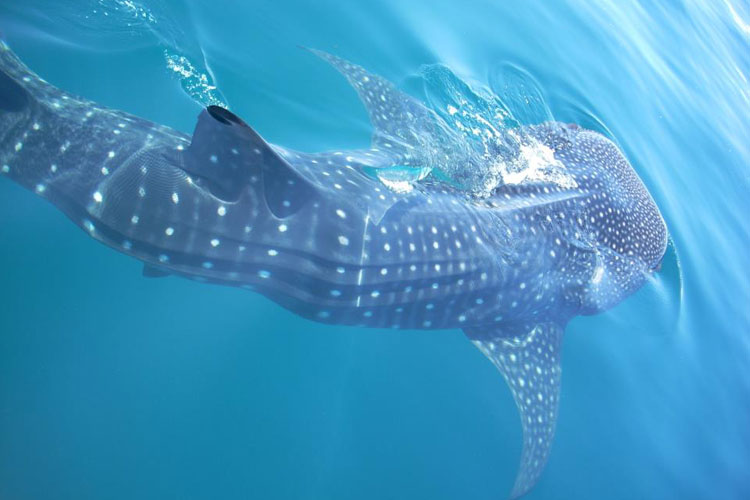 Turtles are an everyday sight here while fishing. Most are olive ridley and green turtles, but on a rare occasion you might stumble upon a giant leatherback turtle roughly the size of a pool table.

This is not to mention the flora and fauna one sees while inshore fishing. The beaches are pristine, and a wide variety of macaws and seabirds hang close to the beach. This blended with an emerald surf line makes for a spectacular near shore experience.

On every one of those Discovery Channel days, I have no recollection of what I caught. But forever etched in my memory is what I saw.

Thanks Todd and I am sure if there are any anglers out there that maybe looking for somewhere to bring their families and possibly squeeze in a couple of days of fishing then they may well be seeing you soon.