We have had Septembers fishing report in from the location of Crocodile Bay in Costa rica and as usual this beautiful part of the world is not failing to impress with both is fishing and wildlife.

Yesterday I had the day off and I ventured with my family out to Playa Preciosa or “Precious Beach” as it translates into English. Playa Preciosa is just around the corner from Crocodile Bay Resort and is a short ten minute drive from town. It is one of my favorite places on the Osa. When we go to the beach, we like to make an afternoon of it and bring beach chairs and a picnic lunch. Playa Preciosa is a great beach for swimming, but the spectacular view of gulf is what really makes it special. As I was settling into my beach chair and was about to take a bite of a sandwich, something caught my eye a short distance from the shore. I could see the black and white fin of a Humpback whale slapping the water about a quarter of a mile from the beach. After about ten slaps, a baby Humpback came completely out of the water next to the bigger whale. The young Humback breached about three more times as its mother continued slapping the water encouraging him. Then suddenly as if to show their support, three more adult whales began breaching further out in the bay. They were a couple miles away, but their big black bodies where easy to see and the giant splash of water they created was unmistakable. This went on for about ten minutes as we sat there eating our sandwiches watching the thirty plus ton animals coming out of the water as the baby Humpback continued to practice it’s jumps. It is experiences like this that make Crocodile Bay Resort, the Golfo Dulce and the Osa peninsula such a great place to visit and even though I am a diehard fisherman, sometimes it is not always what is at the end of your line that makes the day special. 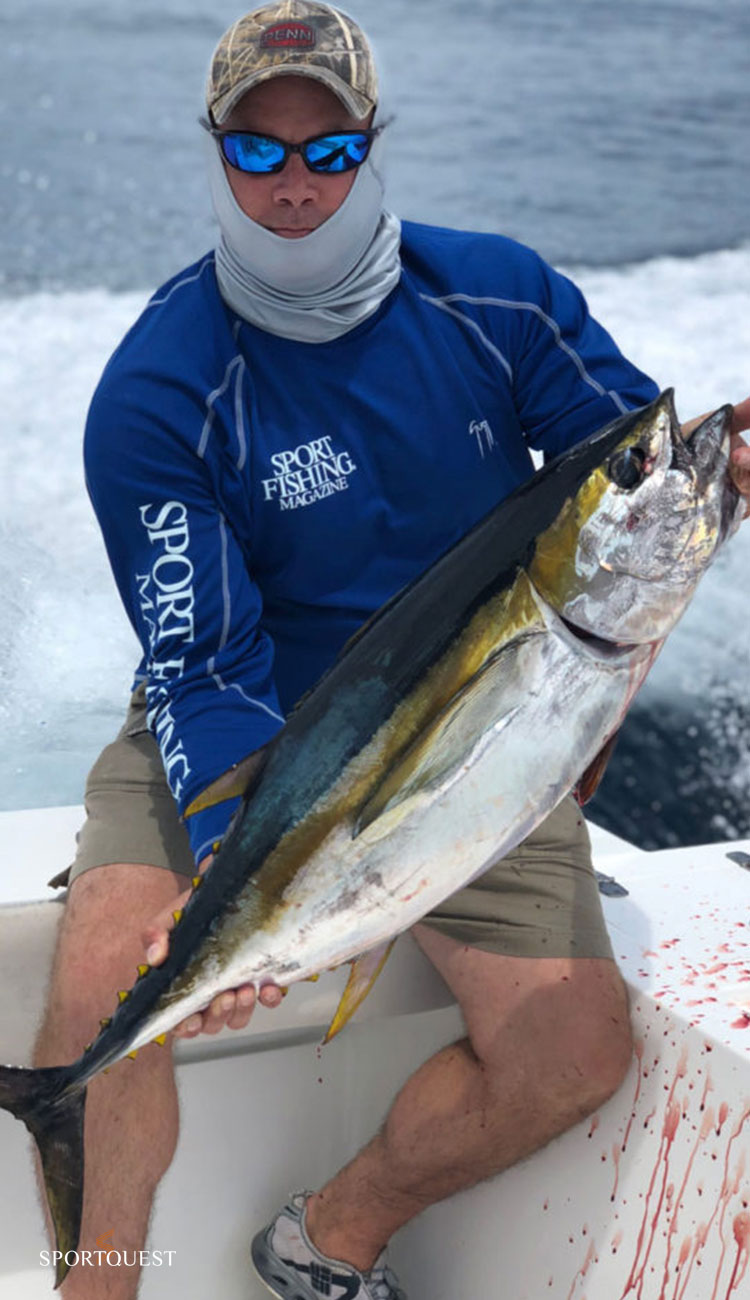 August has continued to see some very good yellow fin tuna action. Offshore, the schools of dolphin have been in close and have had some very hungry yellow fin running with them. We had a run of about two weeks that our anglers were catching tuna almost every day. A couple of boats had double digit release days and all of the fresh tuna coming in made for some happy anglers and a busy sushi chef.

The sailfish fishing has been fairly consistent with boats raising from one to five fish per day. One boat had an eleven sailfish day with five releases. Yesterday two boats released five sailfish between them. 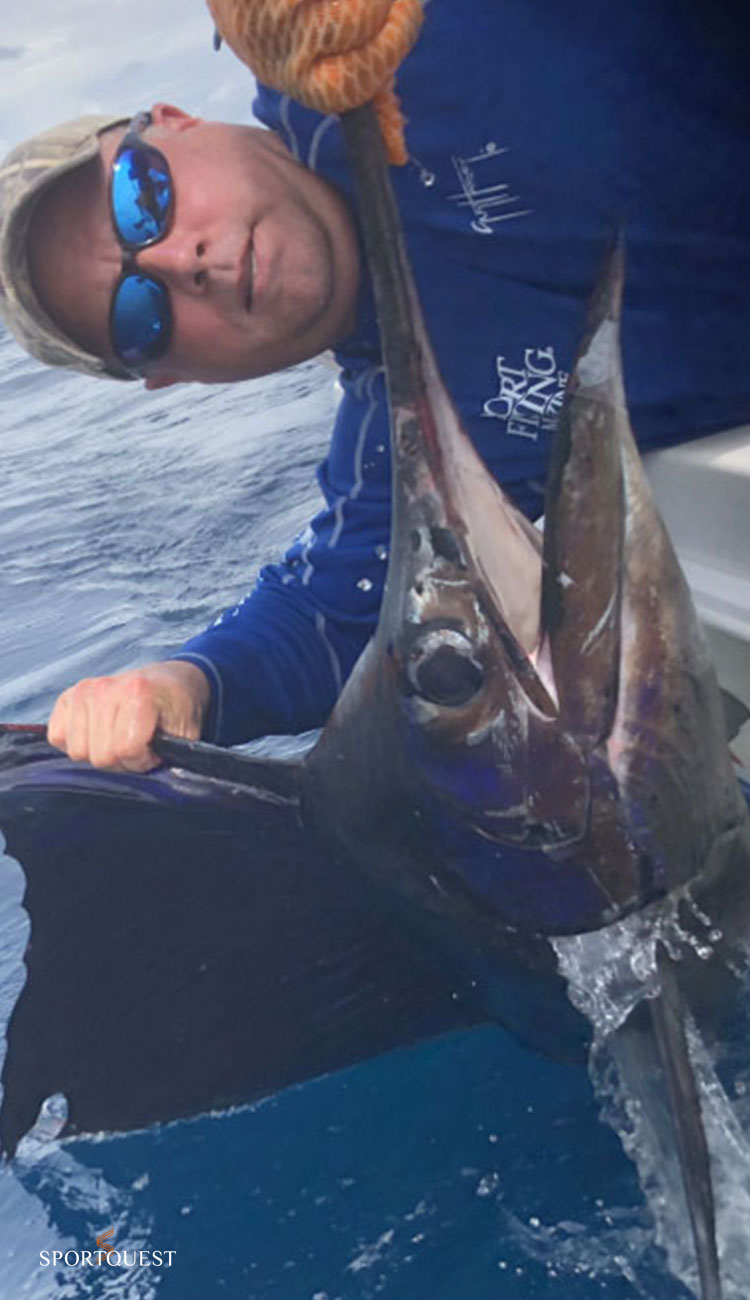 The marlin bite has slowed a little bit, but one notable catch was Adrian Brice from the UK, who landed his first blue marlin that was estimated at over four hundred pounds. Congratulations Adrian! You can see him holding it beside the boat in our fishing highlight video.

Inshore, the fishing has been a little different this month. The last two weeks, we’ve been catching a lot of small yellow fin tuna and a few dorado. The captains have been trolling for them with Rapalas and live sardines. One of our boats caught fifteen yellow fin tuna and a dorado earlier in the week and they were all less than a mile from shore. 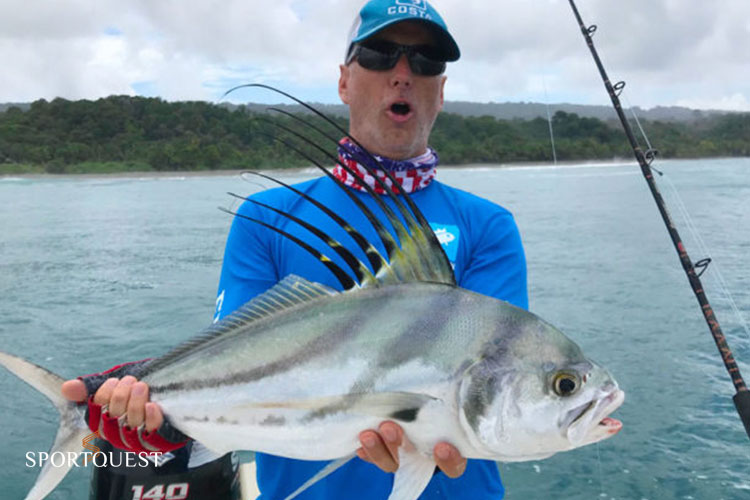 Roosterfish have been a little spotty this month. Lots of bait in the gulf have made the fish more selective and some days we’ve had to work a lot harder for a bite than usual. I suspect that as we move into September this will improve. We historically see more and bigger roosterfish in September, October and November.

Finally, I would like to thank the Pure Fishing group who we had the pleasure of hosting this month. Crocodile Bay proudly uses Penn, Berkley fishing line/Spider wire, and Sebile in some of the most extreme salt water conditions on the planet.  Our captains and our guests rely on these high quality products each and every day.  A commercial environment provides the toughest testing ground there is and the complete Pure Fishing family of products always come out on top and never let us down. 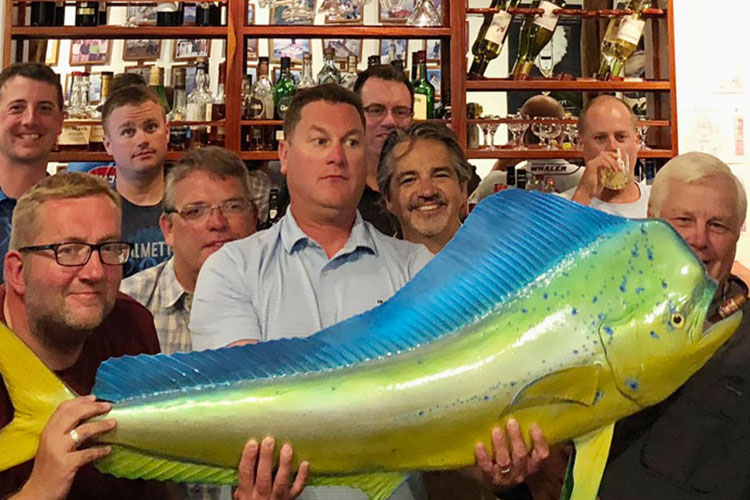 They are great partners and we are happy to have their many products aboard our boats. Partnering with companies like Pure Fishing really makes our operation run smoothly. It is always fun having industry people down, and though they were mixing business with pleasure, they still managed to catch quite a few fish. Thanks again guys and we look forward to your next visit.

What an amazing report, this destination should be on every anglers bucket list to go fish, and why not take your partner as well, it’s not all about the fishing.