Fishing Report Sri Lanka Back in January we had six very keen Swedish anglers wanting to try their luck in the waters of Sri Lanka popper fishing for GT’s. Popping for GT in Sri Lanka is a bit different from most other destinations as there are no reefs on the surface to fish against. This makes Kirinda a perfect destination for big fish, as they tend to like the deeper water more. Every day on a trip is unique giving each angler a different taste of what Kirinda & Sri Lanka have to offer. Our guides have very kindly given us the below report from both the boats ‘Rampageous’ and ‘No Limit’ that they fished from and hope you enjoy their words and pictures:

A perfect first day for the group of Swedes aboard our 31 foot boat “Rampageous”. The guys started the morning with a session of jigging where they saw some beautiful echoes on the Garmin even though the water clarity was quite low due to heavy rain during the past monsoon season. They decide to start their trip with some jigging, which can be a very productive method and their first try at jigging in Sri Lanka, results in a hard fighting Amberjack of about 7kg. After lunchtime they decided to go popping as they had brought an array of excellent big poppers such as Hammer Head and Cubera. Immediately they had good activity and even though the watercolour was a bit more green than optimal, they had 15 bites and could manage 8 fish in the boat in just a few hours. The Highlight of the day was when they hooked a big GT very close to the boat. The fish went off for a long run and gave them a fight for several long minutes. After pumping the fish in with tired arms and an aching back, the fish appeared just a couple of meters from the boat before deciding to go for a second run. This time the GT had “lady luck” on it’s side and got away. Fishing Report Sri Lanka 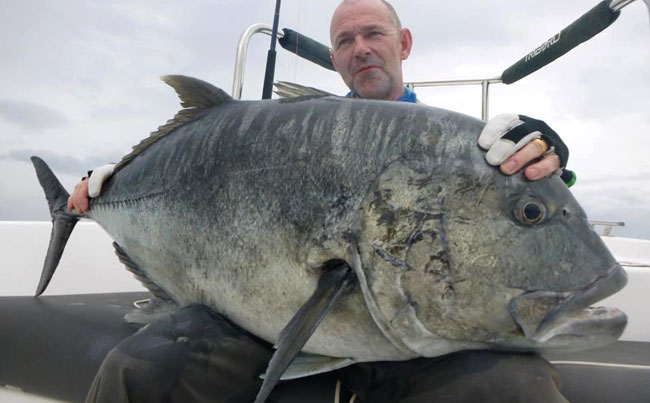 5 bites 3 GT + 1 Blue Trevally – With many bait schools showing themselves on the surface and a lot of activity of feeding fish on the Garmin sonar in the deep water, hopes were high for some good activity on poppers. But although the activity in the deeper water was high, the fish seemed reluctant to come up to the surface. A winning method this day could have been to use fast sinking stickbait, with a slow retrieve to get down to the feeding fish in the slightly coloured water. But our Swedish clients kept on popping strong, even though one of them had dislocated his spine, just a couple of weeks earlier, he managed his first fight with a mad Giant Trevally and got it inside the boat! Well done! Fishing 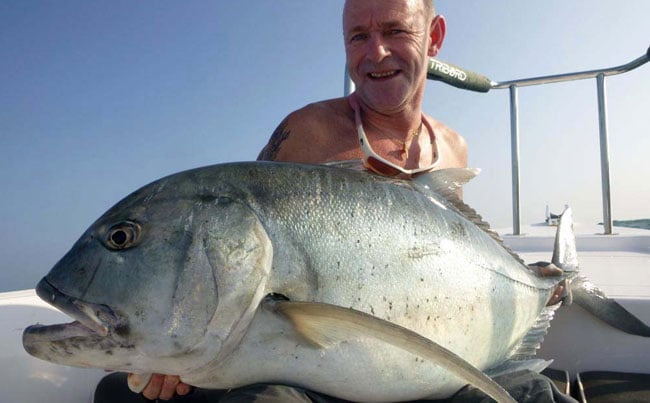 On the second day the group decided to give jigging another try, as the species can often be more varied, with fish such as Grouper and Emperor Fish. Going to a different spot from the day before, they hoped for more activity. The morning resulted in a nice barracuda and a lot of leaders cut off due to the jagged teeth of the King Mackerel. The afternoon was once again devoted to top water fishing with big poppers. Activity was quite good with 4 GT landed for 8 bites. One of them managed to hook into a real fighter in the front of the boat, taking just at the drop off. Just when his strength was starting to run out, the big fish came up to the boat making it possible for the crew to get the fish in the landing net. In the boat, the fish was measured to a length of 125cm and with a girth of 92cm, pitting the scale at 33kg! Fishing Report Sri Lanka 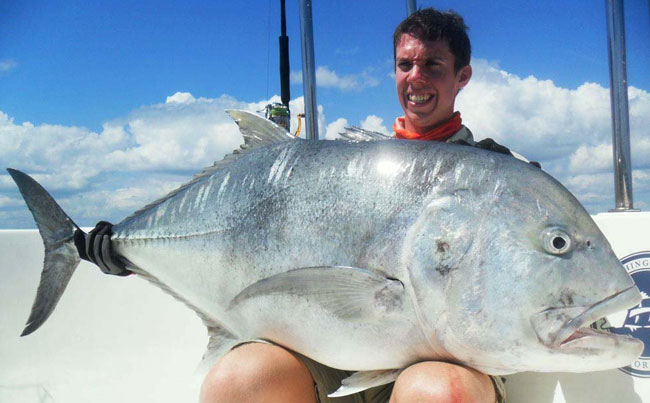 9 GT landed for 23 bites, Good activity of fish in the shallow water spots with many GT waiting on the reef drop offs, hungry and aggressive. The water quality was much better on the second day with not as much green, muddy water flowing out of the rivers, dotted along the shoreline of beautiful Yala National Park. One BIG GT saw the popper break the surface in the clear water and exploded on the bait. With full drag the monster still managed to reach the rocks of the shallow reef and broke the line. One more fish of similar calibre chased the popper on the surface, and finally got the bait in its mouth, everyone got excited but only for a short while, as the beast had barely been hooked when it spat the barbless 4/0 hook. In the afternoon two very nice King Mackerel cut the leaders as they very often do, due to rows of sharp teeth, taking the poppers with them, which is also why they are called ‘Sri Lankan Tax’. 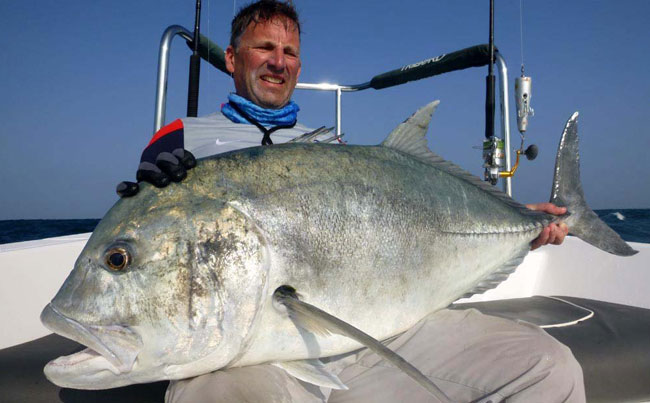 Fishing Report Sri Lanka With everybody on the boat having had a taste of big fish taking their poppers, the group decided to devote the whole day to popping. Right from the start, they hook in to some “steam trains” but the hook set doesn’t want to play along. One guy then hooks in to something with a bit more weight, and it goes straight for the reef. Managing to hold it back from the sharp rocks the fish is safely netted and lying inside the boat. It’s a nice fish of about 25kg and brings the days total up to 5 landed fish for 12 bites. 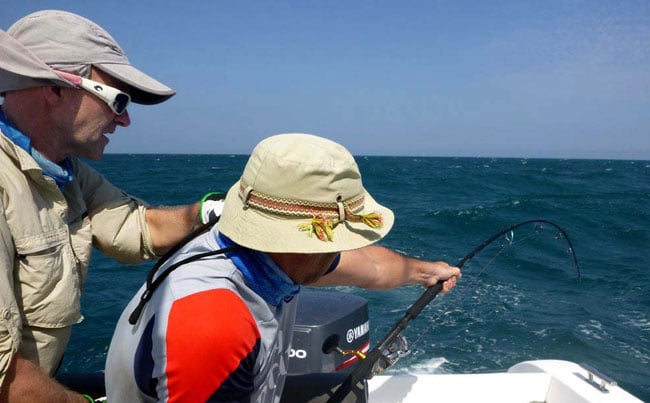 Rain during the previous night and during the day meant a lot of colour in the water, and this brought out with the help of the currents decreased the visibility for the fish. Lots of bait was showing on the Garmin sonar in the deep water but there was less activity from the predators. The guys still managed some fish with big poppers making big splashes on the surface to get the attention of the GTs and had 9 bites resulting in 4 GT landed with a nice fish for Per of 25 kg. 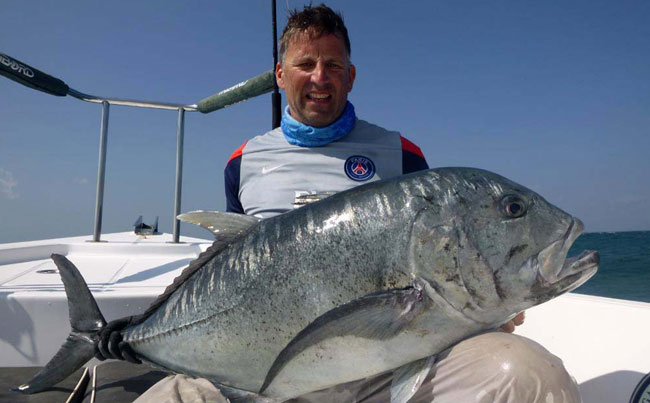 On day four, we decide to try out a jigging spot that had produced a lot of fish recently when we fished there with a previous group. It´s quite a long drive with the boat, about an hour, and demands good sea conditions with not too much wind. At the spot activity is not as high as hoped for mainly a result of tidal currents. After an hour of jigging the spot we decide to go to a small reef close by, outside of the fishing village Hambantota. Here we see several local anglers lined up with their boats, and as soon as the swedes drop their jigs, the bites come. The spot held a lot of king mackerel hunting in the different layers of the water, resulting in many jigs lost with a few fish landed inside the boat. The afternoon is spent popping on several different reefs that usually hold quite a substantial amount of fish, but with a mix of current and coloured water the activity is low with 2 landed GT, and a top fish of 15kg.

Like the day before, a lot of bait showed up on the sonar on the deep water spots and the Garmin clearly showed some nice fish staying close to the nervous bait schools. The GT stayed in mid water of about 5-10m depth, and only big poppers like Hammer Head G-Cup or Cubera 180 would attract the GT, we know its hard work but it sure works for deep water popping, hunting for some of the biggest GT in the world! One of the guys got a big hit just over the top of the reef. He set the hook perfectly sideways to minimize the slack line and immediately the GT gave him an explosive fight, catching his Personal Best Record with a nice 30 kg GT (122 cm/96 cm). At the end of the day, 4 GT were landed, plus 1 good size blue trevally and a King Mackerel for 13 bites with an average of 15 kg per fish. 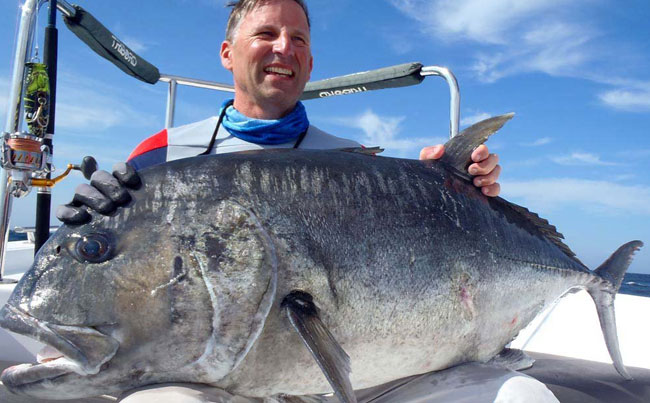 With only two days left of the trip, the guys worked hard on day 5. The fish were clearly there on the Garmin but remained very close to the bottom, which is always hard, when fishing big drop offs and deep spots. Day 5 ended up to be the slowest day on Rampageous with activity close to zero. The day ended with 3 GT seeing the inside of the boat, with a fish of 15kg at the top.

The day was a bit windy, but we decided to return to the shallow spots. The GTs were really active in the small waves and gave the best fishing day of the trip with 10 GT landed for 21 bites. Most of the fish were in the 15 kg range and one lucky angler caught a nice 30 kg GT that meant that all three anglers on the boat had broken their Personal Best Records! One of the anglers who had popped strong and hard all through the trip with an injured back, hooked in to what was without a doubt the biggest fish of the trip, a massive GT took his Hammer Head E-Cup popper very close to the boat. Hooking a very big fish so close to the boat on such a short line is always difficult and shortly afterwards the fish unfortunately got rid of the hook. All the three anglers were very happy with the results of the day and decided to celebrate back at the resort with drinkable GTs (Gin & Tonic) 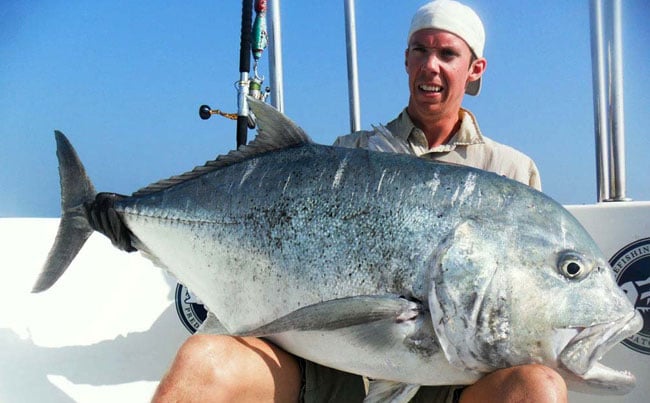 Leaving the harbour on day 6 the crew could feel it was going to be an intense day. The wind speed picked up very fast and treated the passengers with some astonishing waves. This is always very promising when hunting for Big GT as they often like an uneven surface. Using great, big poppers, aligned with strong rods and fully loaded Stella reels, the Swedes got off to a great start!

Striking their poppers through the big waves got them to make a great plopping sound, attracting the fish in the deep waters. During this intense day of fishing, they had 20 bites with 7 landed fish. Amongst those 7 fish were top weights of 20kg, 25kg and 27kg! Good angling!

The weather and sea conditions of this last day were not optimal. With strong winds and choppy seas, the waves stood high. The guy’s wanted to give the deep-water spots a last chance to search out a really big one over 50 kg. The big fish mainly get caught at depths of around 20 meters or more, as opposed to smaller fish, who seem to congregate around shallow reefs. But as it usually is when hunting for big fish, the bites are fewer. The activity was slow and the Indian Ocean was very rough but we managed to find some activity at the end of the day resulting in 9 bites with only one landed GT and the really big ones holding out for another day!