The Andaman Islands are starting to get a very good name for huge GT’s and Dogtooth Tuna and that is due top how well they control their fisheries and the handling of big GT’s. The barbless hook only system they have seems to be working well and with reports like the below, word is soon spreading.

Remember we have a few spaces left for our single angler weeks in 2017 & 2018 so if you fancy joining us on a trip to Andaman Islands and think you have what it takes to land these giants then call us on 01603 407596 and we will take care of the rest.

Philippe had booked this trip for the end of April 2017, way back in 2016. This was a family trip with father Raymond accompanying sons Philippe and Elie on their first tropical adventure, specifically going after the infamous Caranx Ignoblis or Giant Trevally that the Andaman Islands are well known for. The guys had been reading our Facebook posts and website regularly and were really excited to get out and give GT fishing a shot. Their target was a conservative one – to land a 30 kilo GT for the trip. The guys had some good tackle with them and the awesome Fisherman GT Travel rod was one of the rods in the selection. On checking their tackle we saw that some of the setups had only 80 lb braided lines on them. 80 lb braided line is not good enough for many of our spots, as you not only risk losing the lure but also of hurting the fish. We discussed this and decided that they could give it a try on day one but if there were any bust-offs we would need to upgrade to 100 lb line at the minimum.

“Setting realistic targets before your trip is the perfect mindset”

We had a long discussion with the guys over tactics and common mistakes when fishing for GT and how the whole game is about getting the lures into the water for as much time as possible. Our experience with most French anglers we have fished with is that they want to have more action when fishing, in terms of strikes and quantity, as compared to quality fish. It took a bit of convincing to get the guys to go for quality over quantity since they had a quiet first day, though they still managed to bust off 3 lures; so at least we got them to change their line to 100 lb Hollow Braided line. Adequate warnings of what they were about to encounter in the next fishing days were given again. Another thing we notice with anglers coming to fish with us is how their casting improves over the week and the distances they are able to cast by the end of the trip, which is all down to muscle memory repetition. 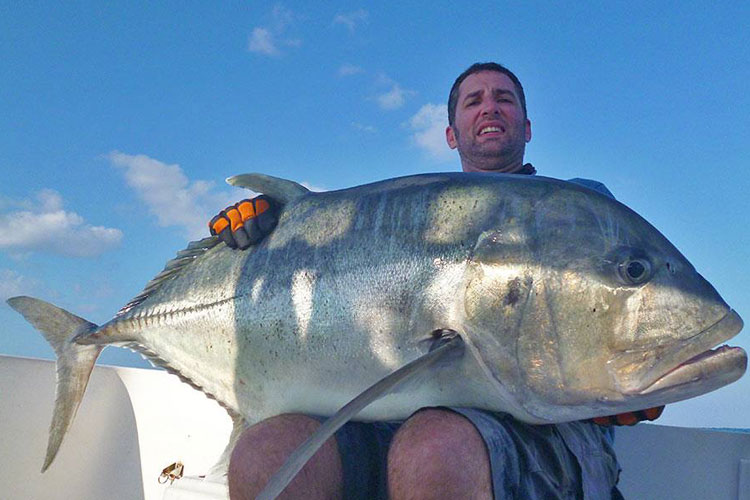 By the end of fishing day two we had bust off another 3 lures, not to big fish by any means. By now the guys were coming to terms with the reef brawlers and their tactics and why the charter operators and skippers tell clients to lock that drag and get the fish off the reef asap.

Is two days’ initiation into GT fishing enough? Definitely NOT!! But we decided they were prepared enough to try out some of our other areas that have been producing some awesome fish this season. 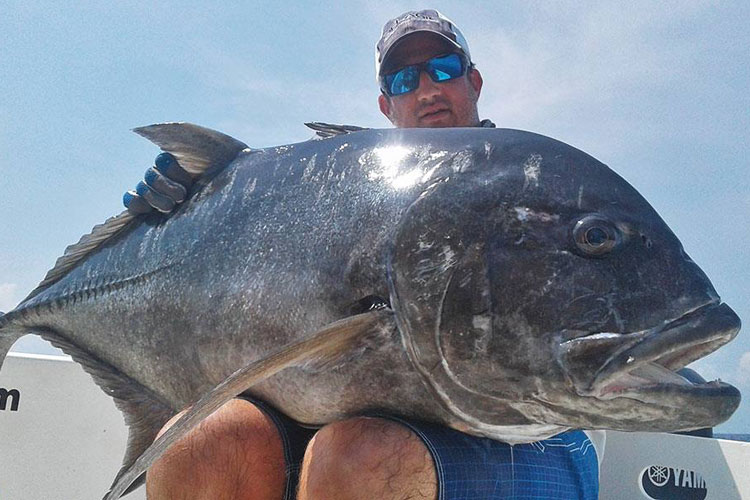 Getting to a deep reef, Philippe has a big take which he converted. A good fight ensued and he held on to land a great GT of 41 kilos. Now that we had got the trip target completed the bar would be raised for sure. More hits followed from smaller fish, to keep the anglers casting through the session. We had to wait out a tide change after the action slacked and decided to move spots to be in another prime location when the conditions were right. It was a good call as this area really fired with a huge GT busting off on Elie’s Cubera popper and Philippe getting another great fish in the 35 kilo range to end a great day with lots of action and big fish coming up. 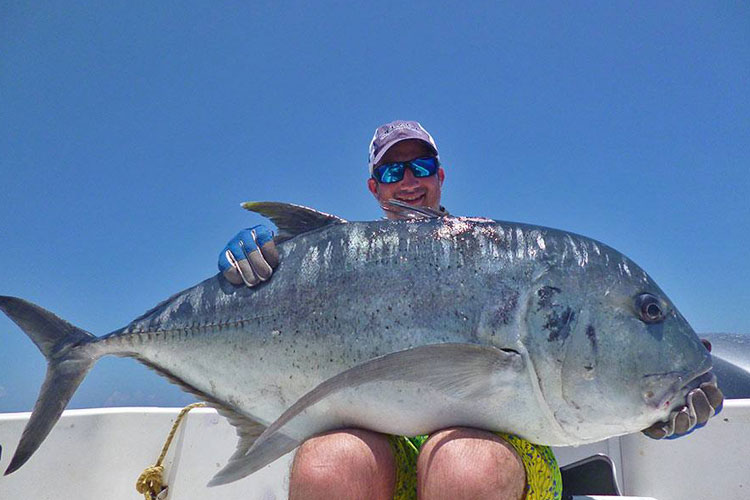 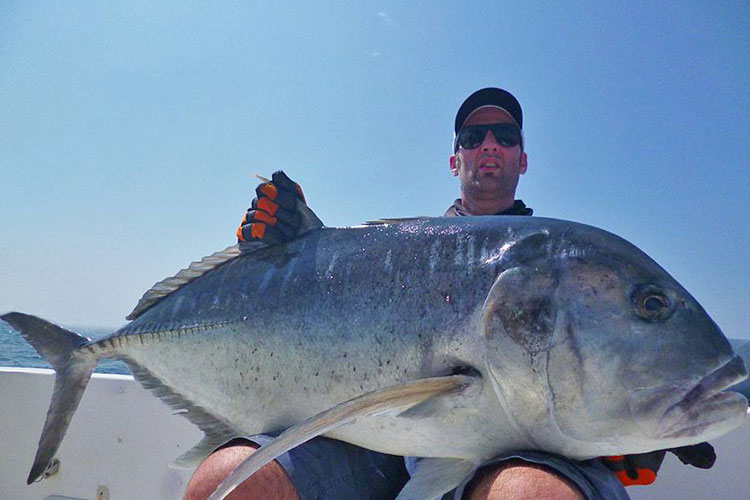 The next morning, we decided to do some jigging first as we were close to a tide change. The dogtooth were there and we had a few in the 10-15 kilo range to give us a bit of action first thing in the morning. We started off the day with a few decent fish in the 20-25 kilo range and then Philippe had his Nomad “Chug Norris” popper smashed by the biggest GT we have seen this season. It took the lure and took off, leaving Philippe struggling to stand under the powerful rush. It stopped and then once again made another rush and this time came off, only for us to see it had opened up the 300 lb split rings and and torn out and deformed the steel rigging of the popper; an insane fish that really deserved its freedom. 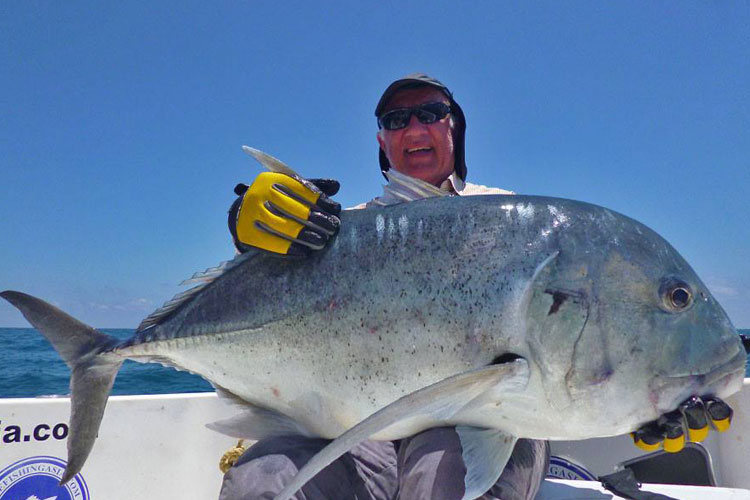 The action did not stop there, with Philippe getting another great fish again. This time he put it on the deck and it weighed in at 44 kilos. Elie too got a nice GT in the 35 kilo range. By this time, I have to admit, the guys were a bit spoilt and we were having a hard time convincing them to get pictures with fish under the 30 kilo mark. 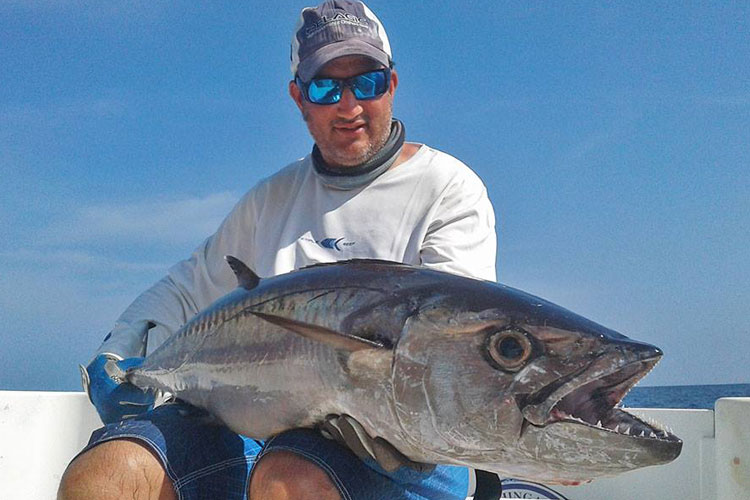 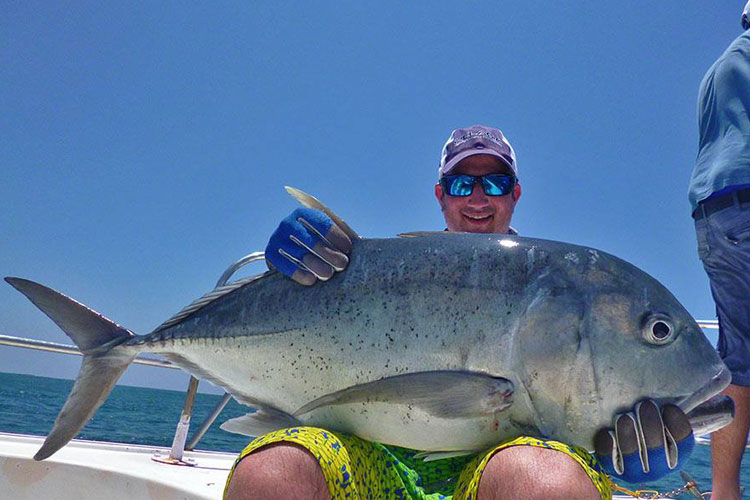 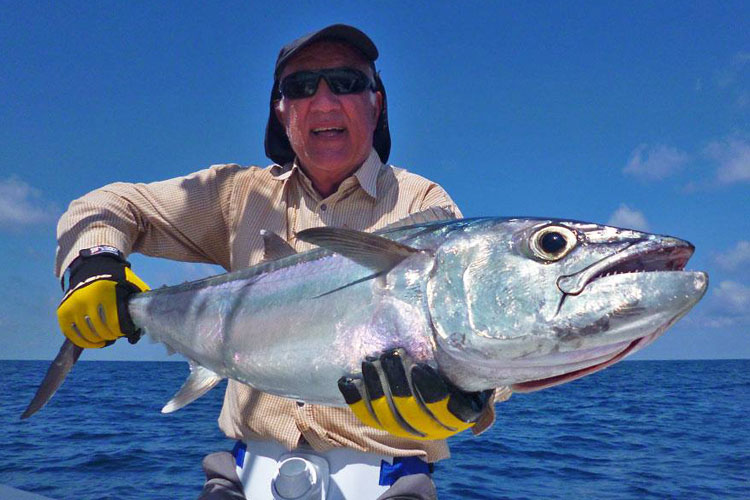 Elie was really unlucky again the next morning when another monster GT crashed his lure and managed to bust off his 100 lb Hollow Braid, leaving Elie flat on his back as he fell over. How some of these Big GT manage to do this is just unbelievable and completely akin to the saying ‘being hit by a bus’. The action kept going but we did not raise any more big fish for the rest of the day.

The last morning, again on the first drift, Philippe had another awesome strike and after a great fight boated another big GT; this one 46 kilos. With 3 fish over the 40 kilo mark on your first GT fishing trip and a couple of monsters lost, these guys are hooked on GT fishing permanently. Enjoy the pictures of another really great GT fishing adventure with us in the Andaman Islands, where expectations were again exceeded. Thanks Philippe, Elie and Raymond for fishing hard with us and congratulations on a great trip.

Thanks guys for such a great detailed report of this group and by the sounds of it, your reputation lived up to their expectations. If you fancy some of the worlds best GT fishing then get in touch on 01603 407596 and believe me that you will not be disappointed.

To view this awesome destination in the Andaman Islands CLICK HERE