Farquhar Report Catch All the Action and as the guides landed on Farquhar a week before the first group of clients were due to arrive, to ensure all the necessary pre-season boat maintenance and set was in place for their arrival. It’s a busy time but essential with the season that lies ahead. On Wed the 25th of Feb, with all the boats running smoothly and tackle set up we welcomed our first guests. 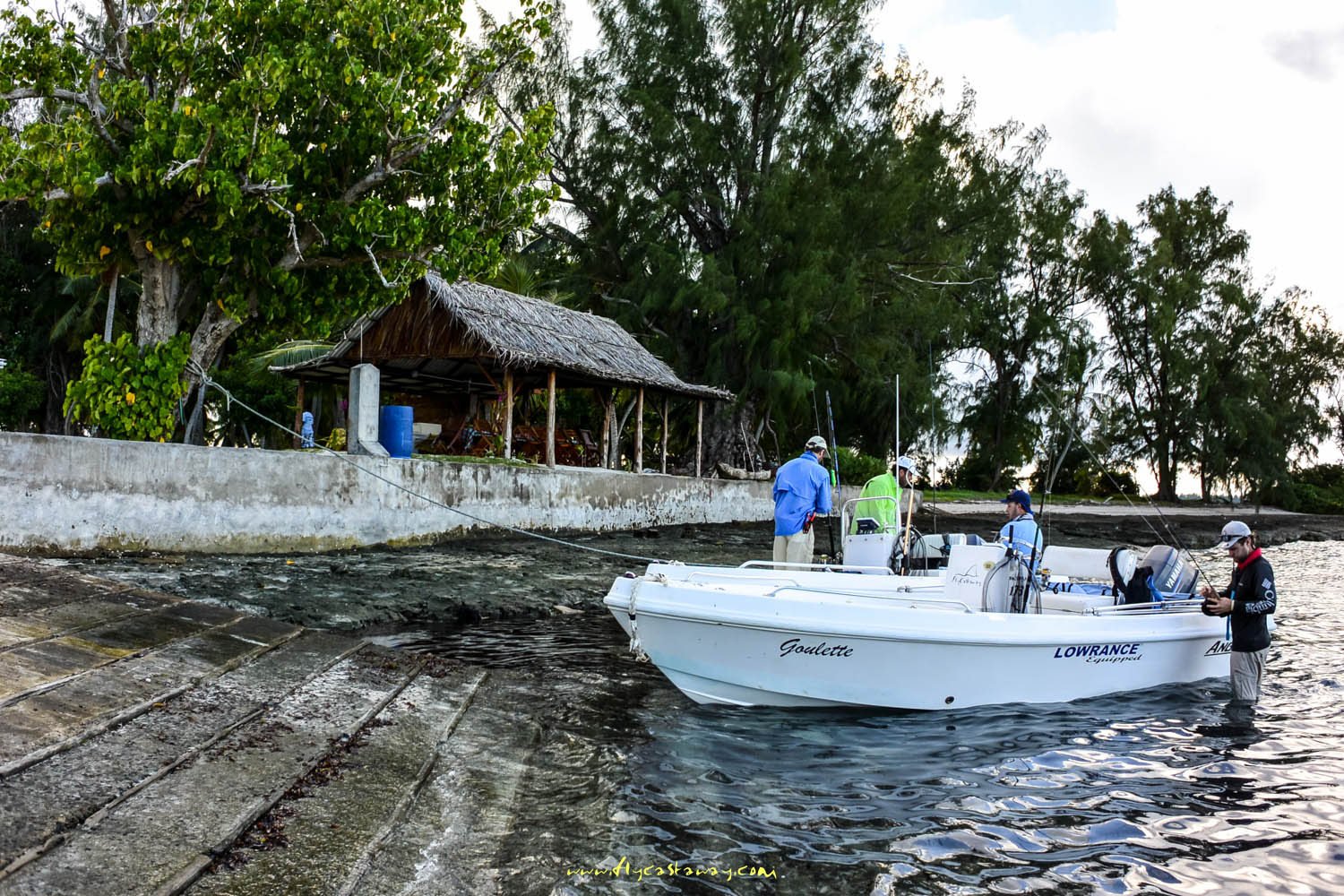 The first day out on the atoll took place with clear skies, crystal blue water and calm conditions promising some excellent fishing. True to form everyone was soon into the action and tallying up the species Farquhar is so noted for. Denis opened his account by landing the first meter GT of the season. Way to go Denis! He didn’t stop there though as he grabbed the opportunity to land the most challenging flats fish we have, an Indo-Pacific Permit.  With four fish cruising the shoreline he made the perfect cast. A fish peeled off the shoal and darted straight for the fly and before Denis even knew it the fish had eaten. Despite it being a fairly small fish it took off on a series of strong runs before guide Brendan and angler brought it to hand. The team decided to chase a slam and subsequently went in search for a Bonefish to seal the deal. The rest is history as Denis now can be proud knowing he enjoyed a truly special day of fishing. 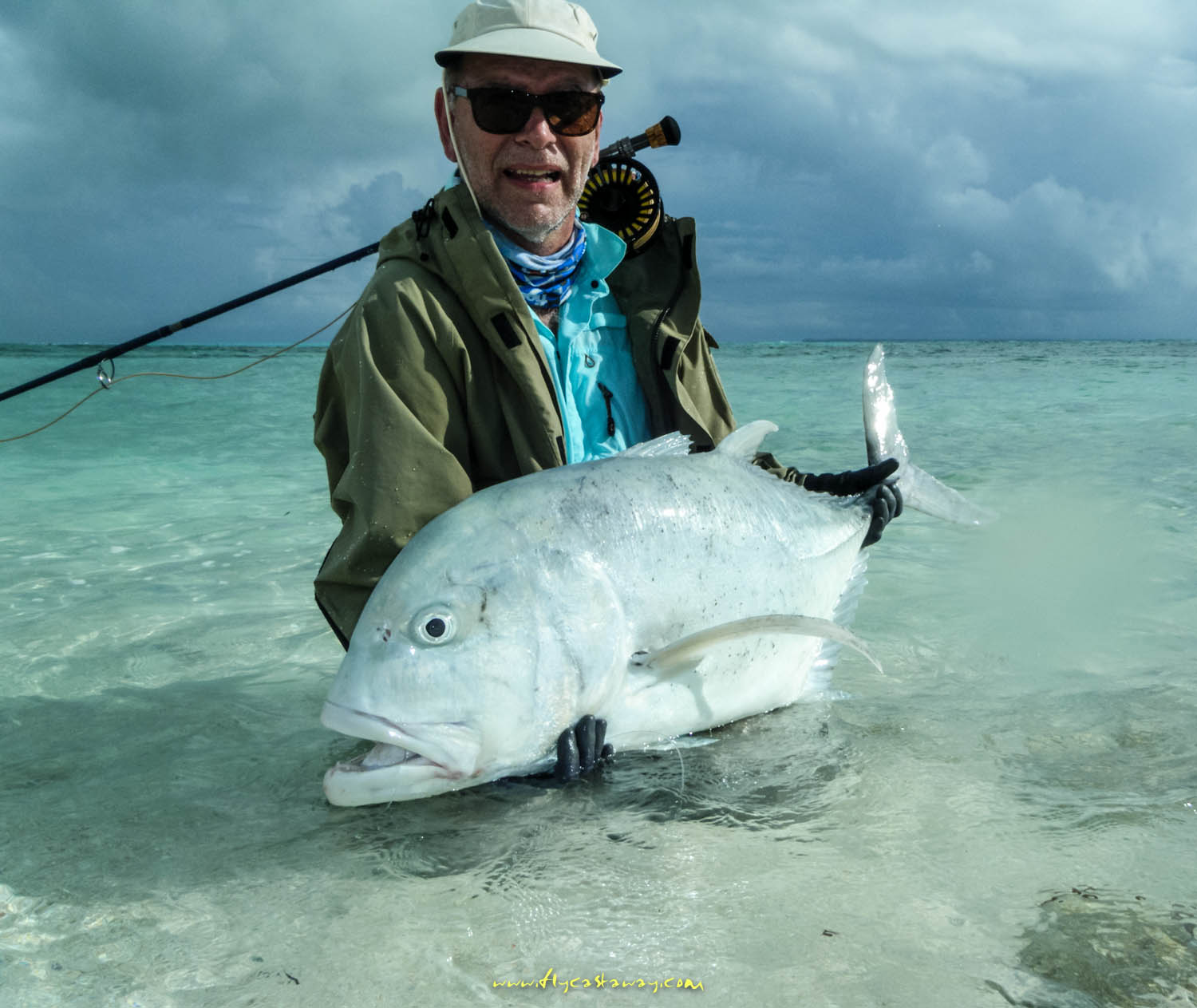 Sadly however, the following five days proved to be the polar opposite as far the weather was concerned. With a cyclone sitting a couple hundred miles off the atoll we were subjected strong winds, cloudy skies and intermittent squalls. These poor light conditions were hugely frustrating as there were certainly some good fish around. Subsequently everyone headed offshore during the high tide period, deciding to make the most of the difficult conditions and slow tidal periods chasing some big fish from the deep. Gautier capitalised landing a GT of 134 cm, 108 cm and 118 cm as well as a Dogtooth Tuna in excess of 60 kg. Denis too was back in the action landing a ‘Doggie’ of 145 cm on the fly. Sebastian landed the first Sailfish for the season as the fish agressively billed his fly before taking off into the distance in a series of tail-walking jumps.  A further 12 GT’s, 9 Dogtooth and 15 Jobfish were landed during the week, with some of the Jobfish reaching the 10 kg mark. 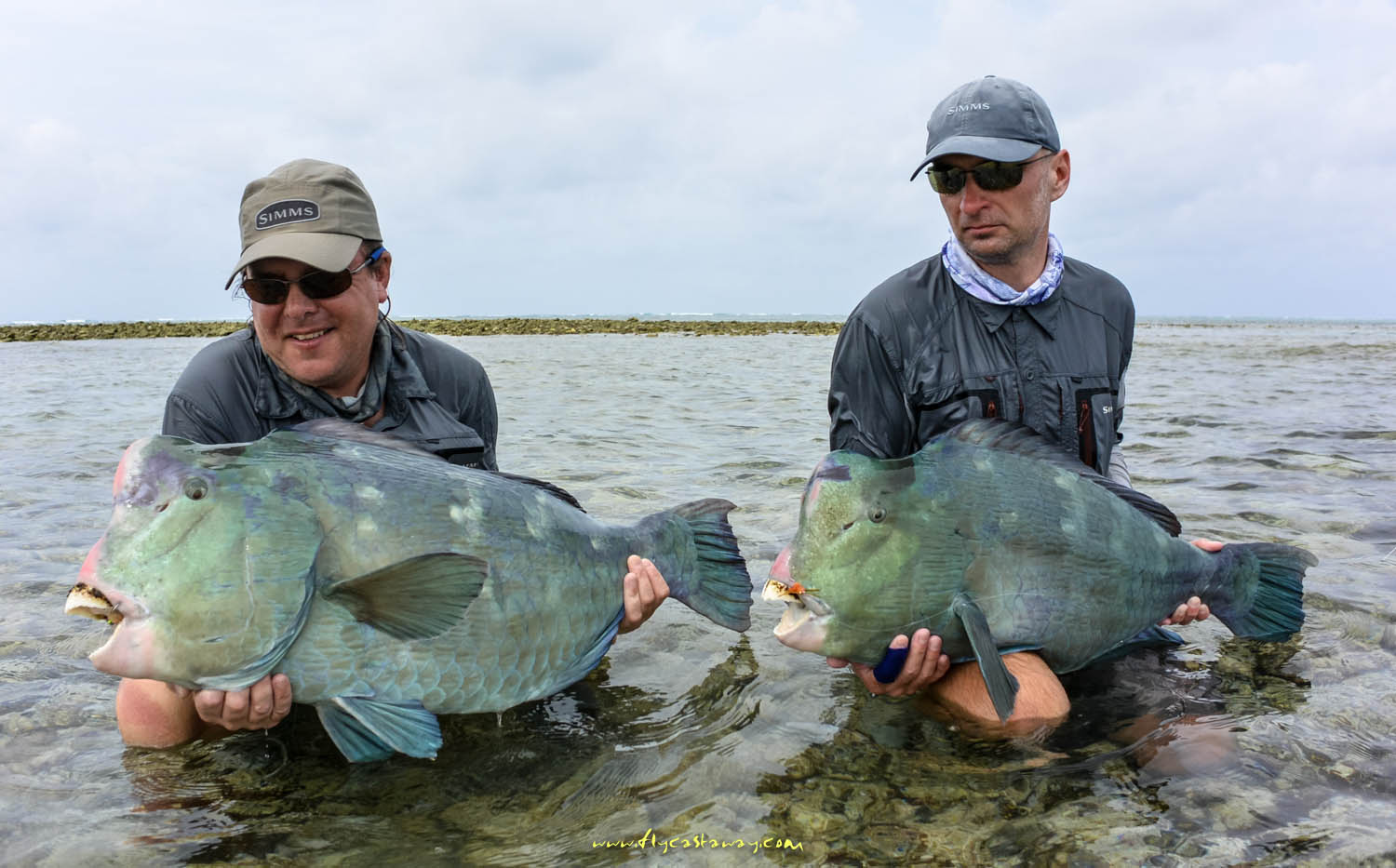 Although conditions were tough, the flats still provided some great fish. Wide blue tails flagged across the flats as shoals of Bumpies grazed the turtle grass flats in huge numbers. Most of the anglers experienced the tackle busting antics of these fish as numerous fish were hooked and lost.  Gautier experienced this first hand as he hooked six Bumpies in a single day, either being cut off, bitten off, almost stripped….. you name it he witnessed it first hand. Alberto however managed to tame a good fish on the first day. Stephan followed his lead by landing an exceptional fish measuring at 118 cm, following which the team of Pascal and Jean Christoph managed a double up on the last day. 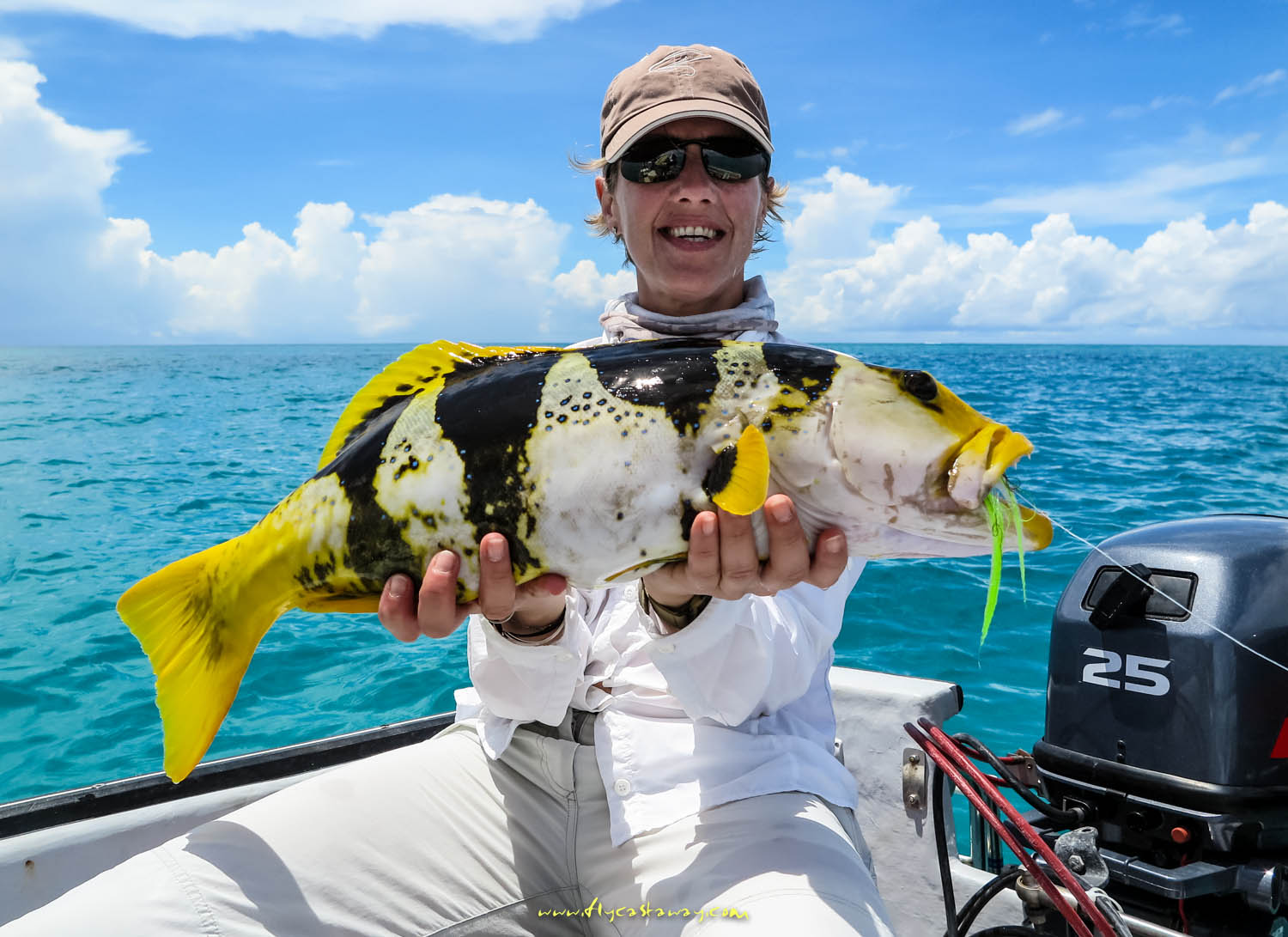 Although you would think the bulk of a GT would make sighting these fish easy, their unique ability to blend in with their environment coupled with the poor light conditions made for tough fishing.  Despite this some good fish were still around and although not all of them were landed some really good fish came to hand. A special mention must go to our lady angler who landed her first GT on fly, showing up some of the men to their dismay in the process. 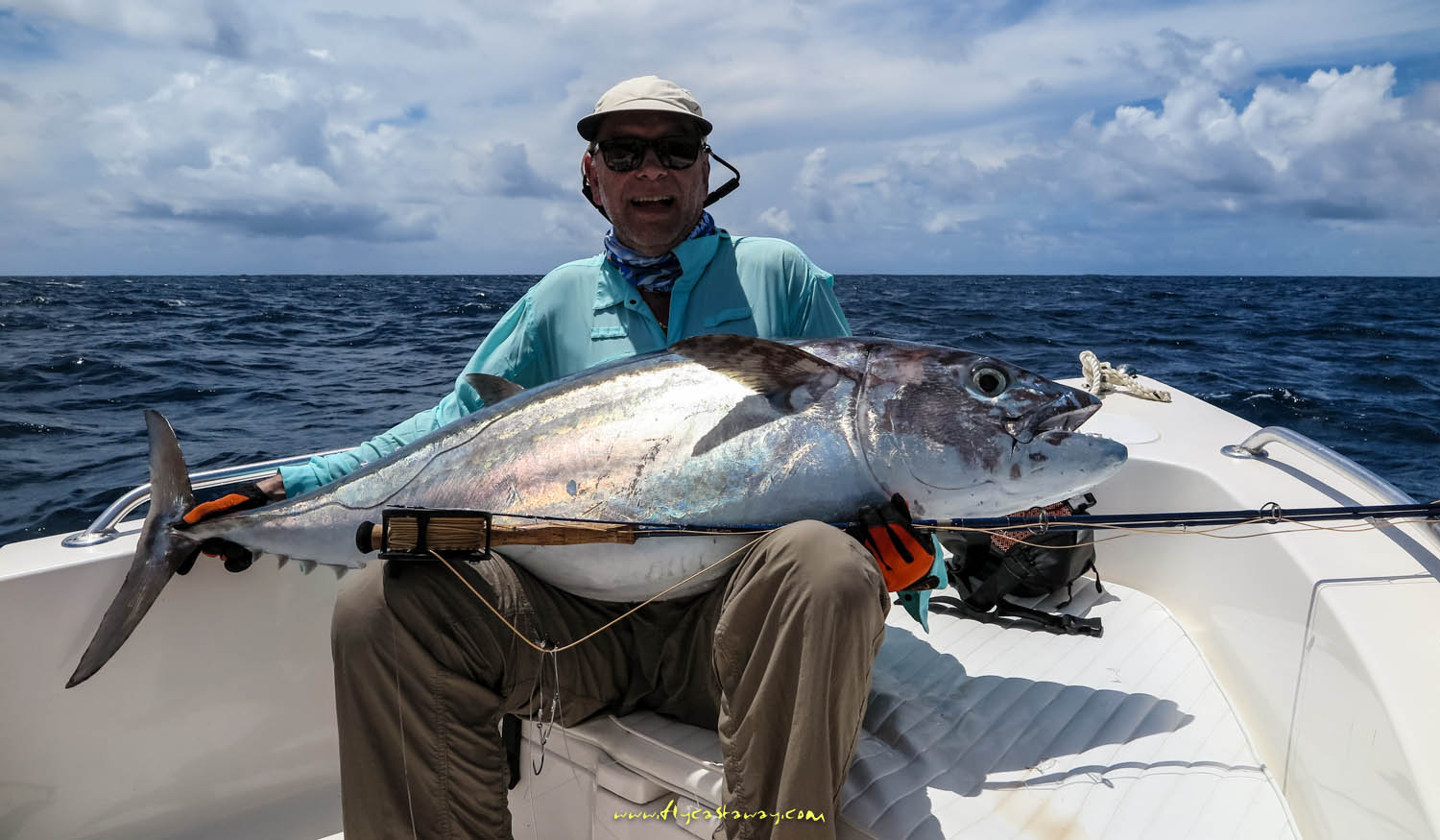 Farquhar’s ever present Bonefish too kept our anglers busy over the white sand lagoon and mottled surf flats, with an excess of 90 fish landed during the week. Lastly, bommy bashing Farquhar’s numerous coral mounds and outcrops proved yet again why this atoll offers some of the finest species diversity in the Indian Ocean. A myriad of weird and wonderful species were landed and the species count ending on 27 for the week. 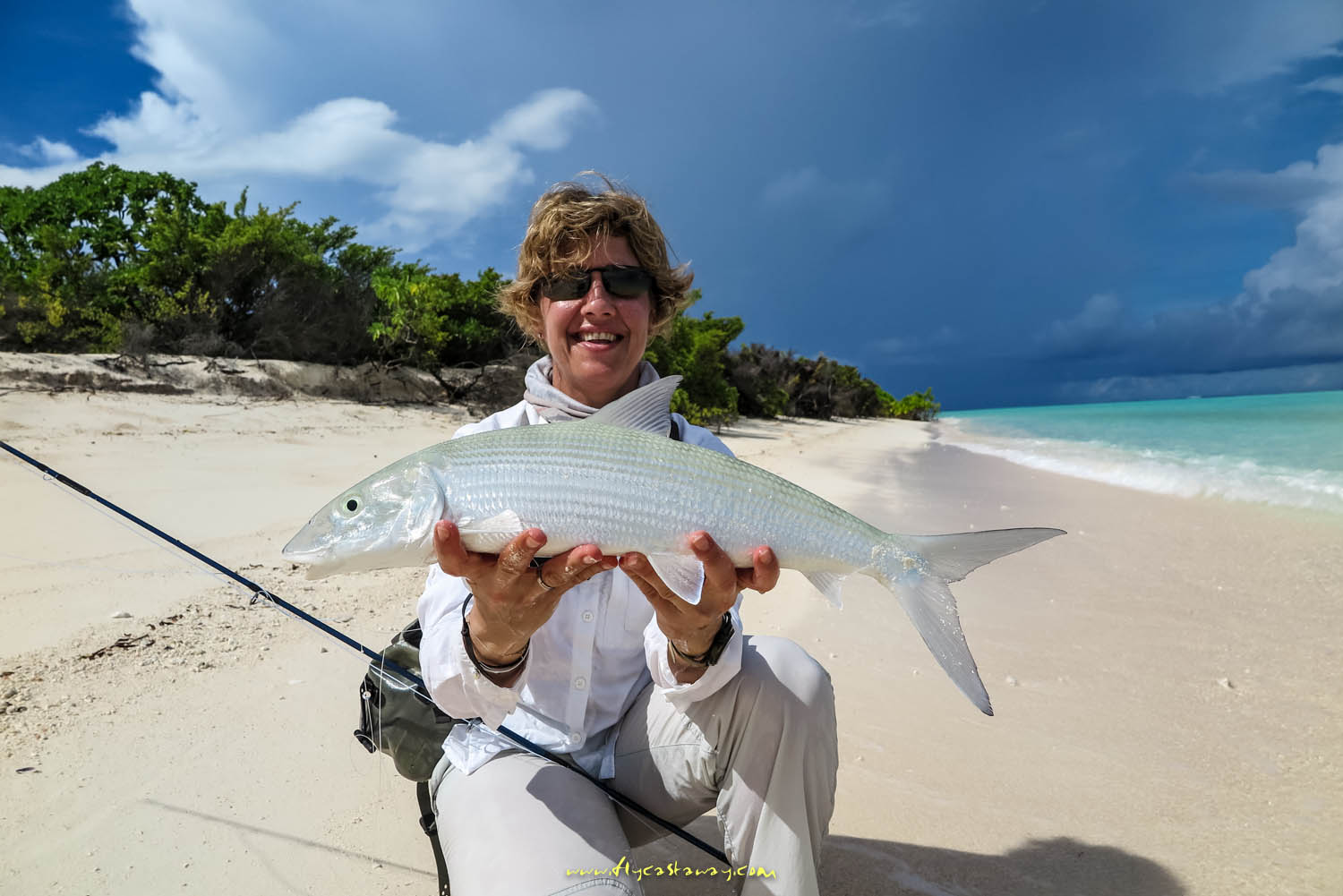 Despite the harsh weather a good week was enjoyed by all and we look forward to many more great reports during the next few months. 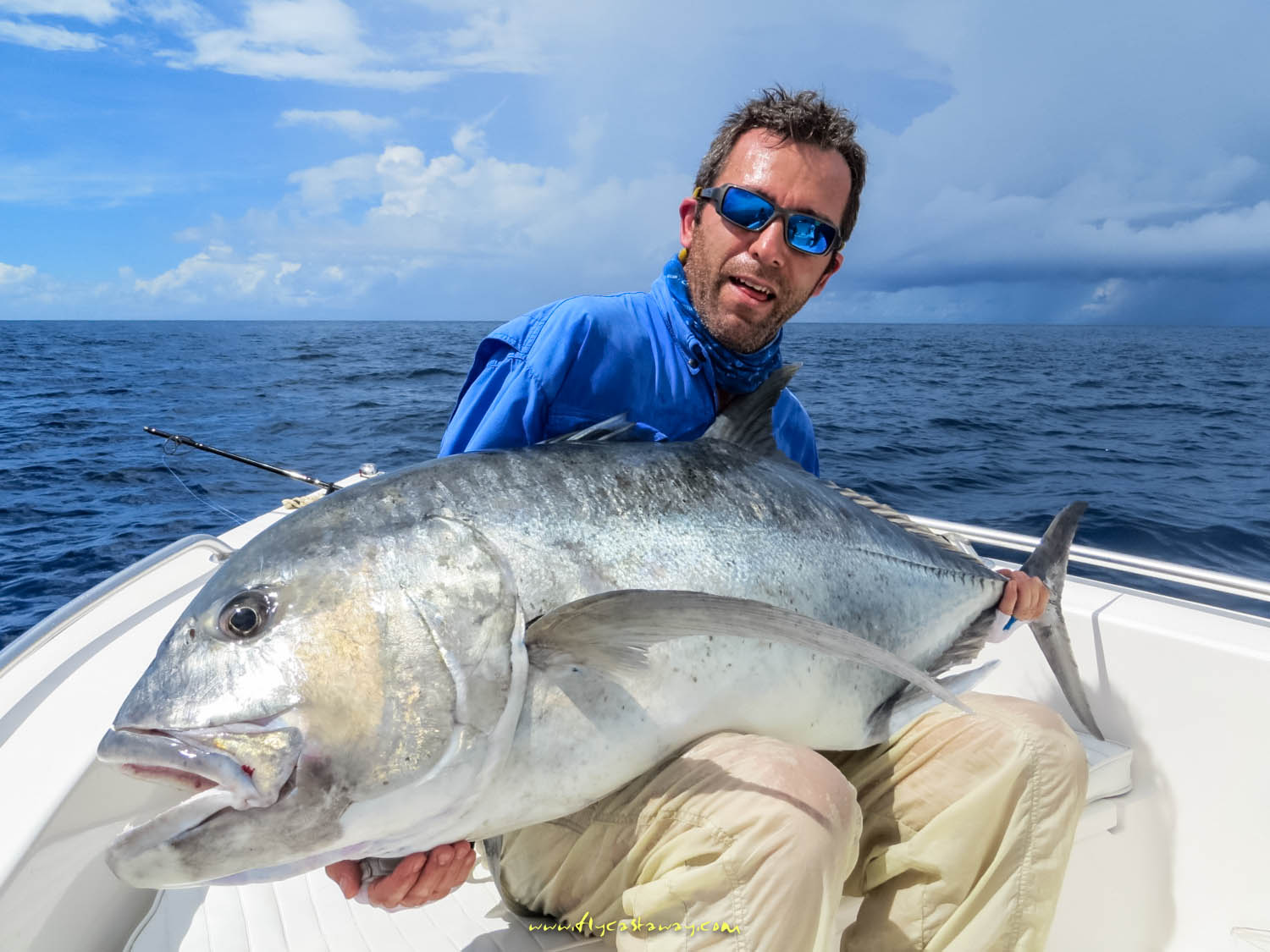 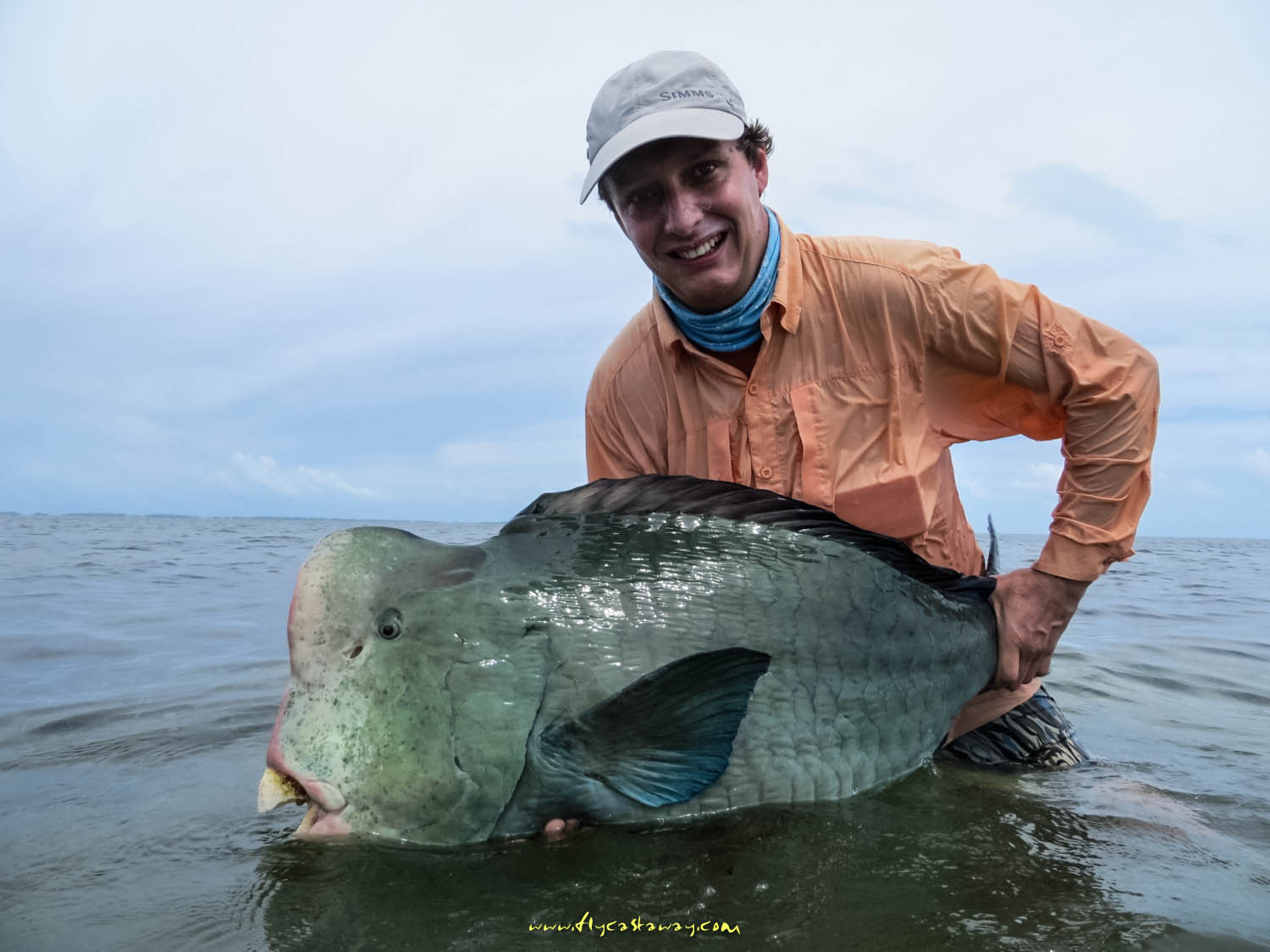 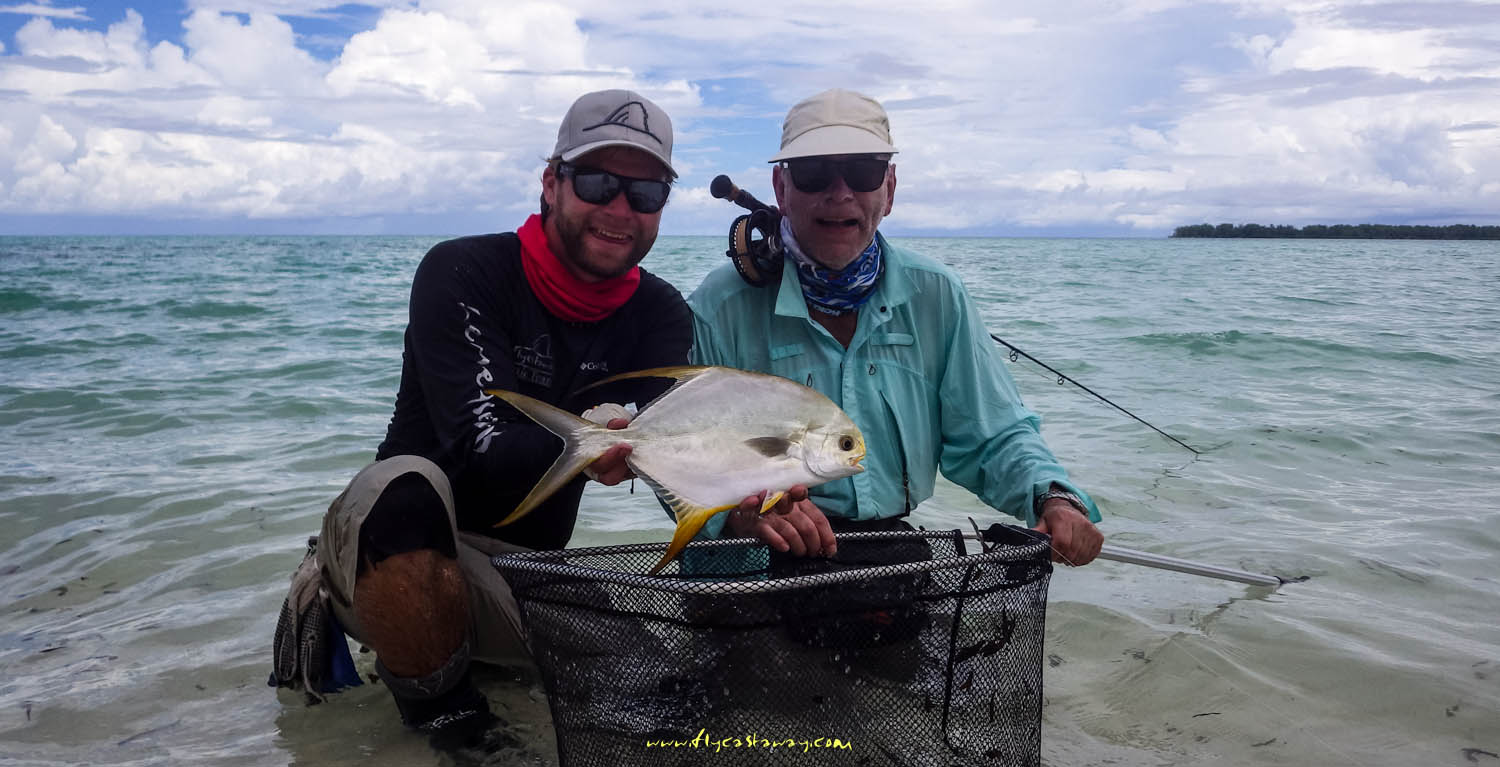 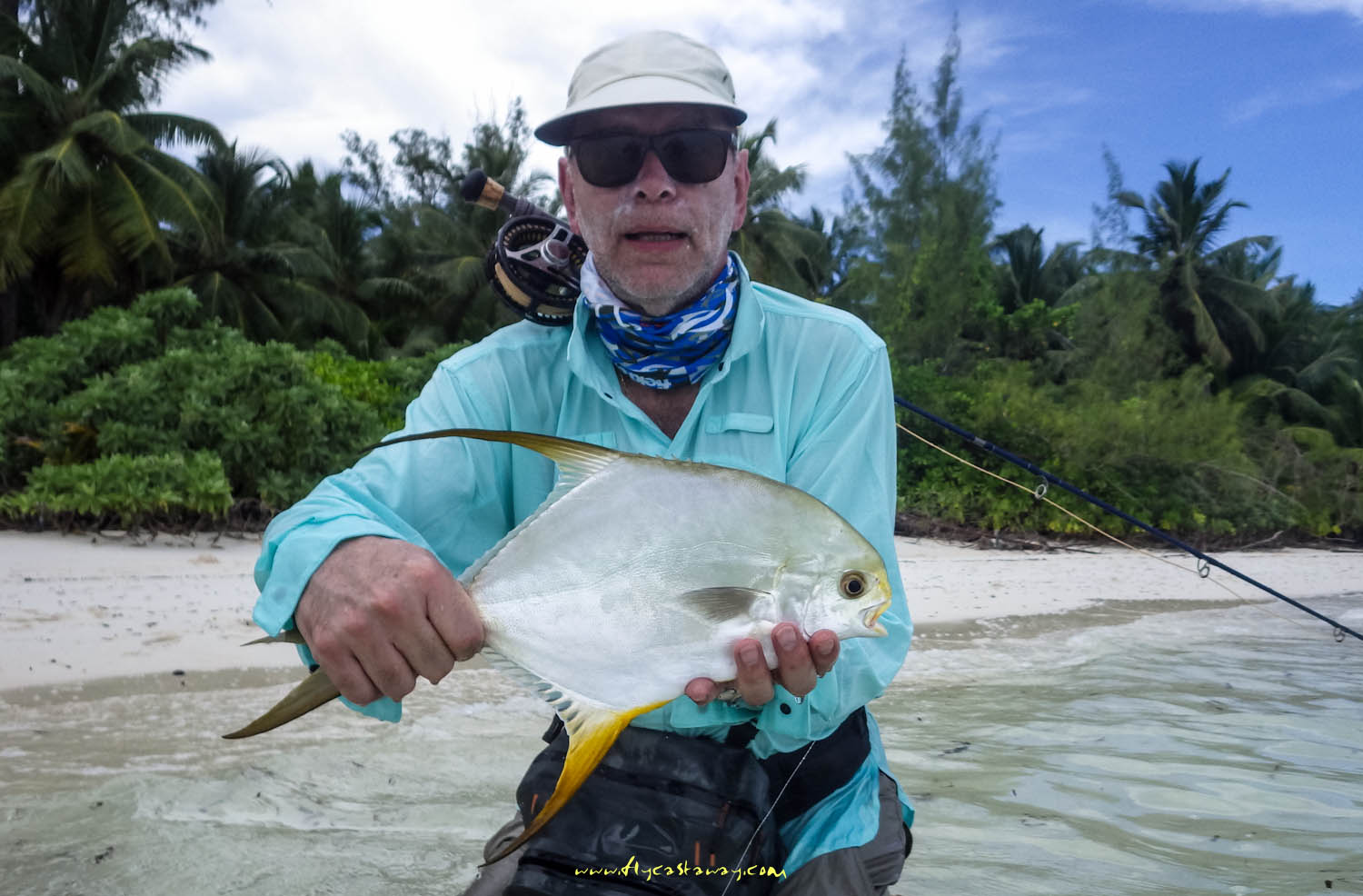 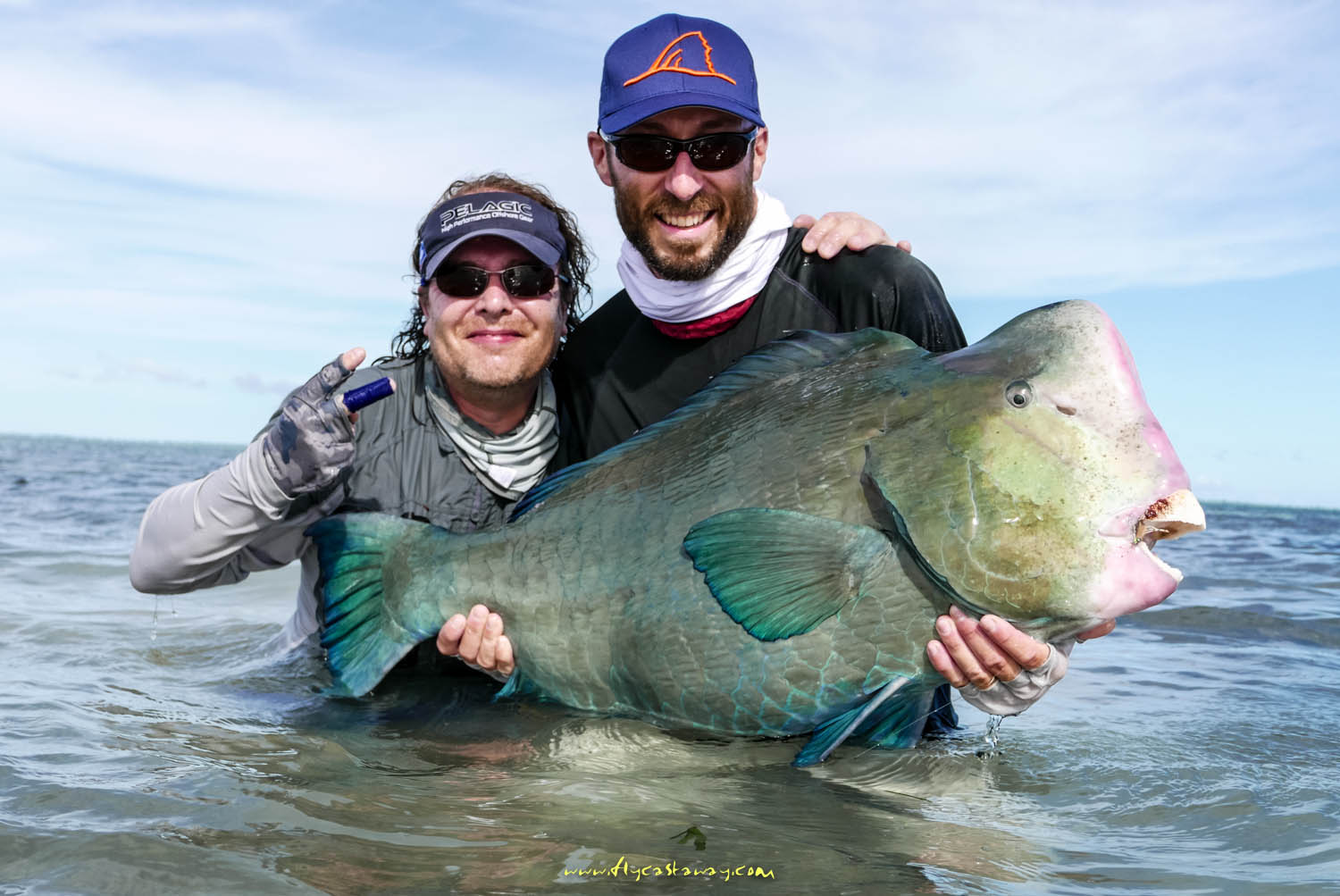 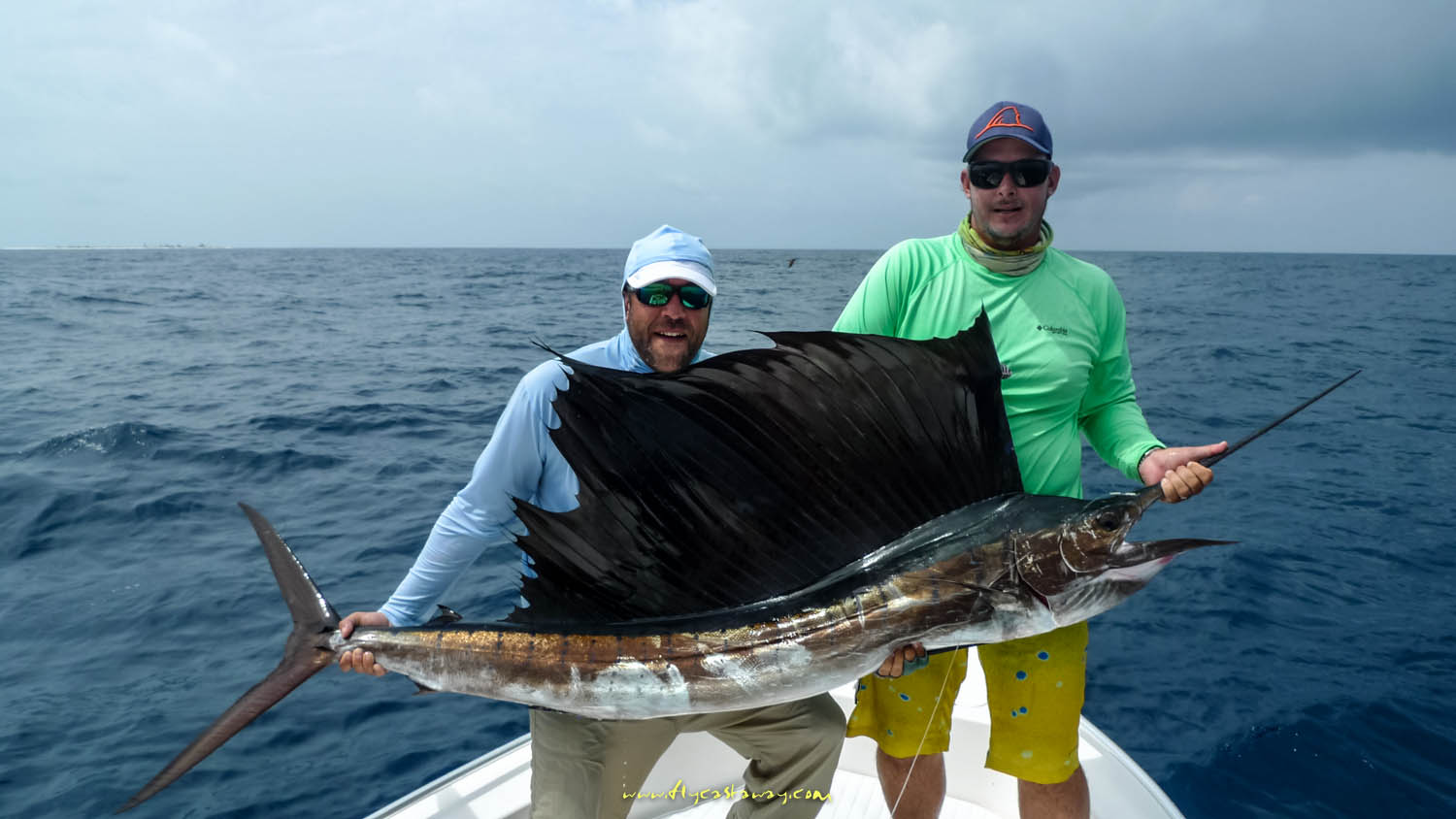