The new lodge on Farquhar is really coming on nicely, and although we will only begin operating out of it in October this year, it was great to see the progress that has been made. The layout from one central house has changed, whereby our guests will now be accommodated in three duplex style chalets, the large central house being converted into a common area that will include a lounge, dining area and bar. It’s going to be terrific!

Anyway back to our current week of fishing. Having just enjoyed a few weeks out on Farquhar’s sister atoll Providence, we were excited to fish Farquhar from the Dugong. The atoll has only seen a handful of anglers on it since April 2016…the question was what did it have store for this week????

Why not also look to join us on one of our hosted trips to the Seychelles. 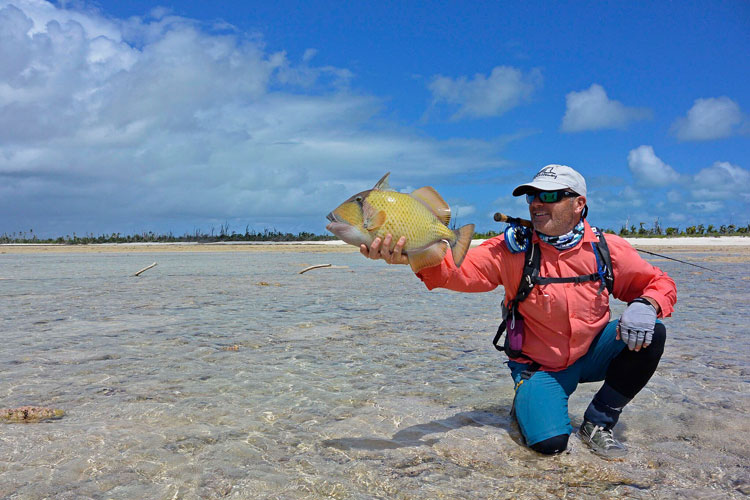 Day 1 – We were on neaps and the atoll looked in great shape, cold blue water for as far as you can see. With that came the fish, including good numbers of GT’s and is Farquhar’s way some really big ones! We managed to get stuck into some straight away, including two special fish for Christopher and David, the two of them landing their first ever GT on the fly. Congrats guys! The Triggers were also around in solid numbers during our first day out, but despite a couple of hook ups we were going to have to a little longer before photographing our first for the trip. Strangely enough the Bumpies were a bit scarce, only a handful of shoals spotted during the course of the day. The species fishing was however off the charts and a great sign that the atoll is in fine shape. We subsequently landed good numbers of Bohar Snapper, various species of emperors, groupers and the ever-exciting Bluefin Trevally. A really positive start! 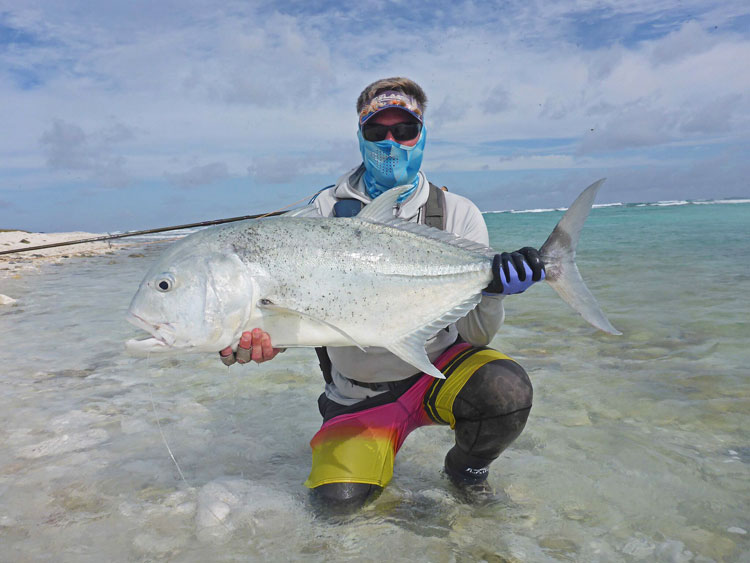 Day 2 – Weather wise we enjoyed text book conditions, the clear sky and a light breeze providing optimal conditions. The GT’s were around in good numbers again and some of our guests managed to capitalize, another first on fly going to Robyn who has fished other Seychelles atolls previously. Congrats Robyn! As if that wasn’t enough, he then managed to break the magical meter mark on the same day with his second GT stretching the tape to 108cm. The fish was spotted cruising around a small coral island on the western side of the atoll and after a well presented cast and dedicated strip, it picked up speed in a split second and smashed the fly. After taking a good amount of string Robyn put the breaks on and the fish was eventually landed. Congrats sir! Although not mentioned previously, the Bonefishing has been nothing but spectacular and today was no exception. Often overlooked by guests coming to Farquhar, it is a reminder that Farquhar is certainly more than a GT fishery. The Triggers too presented themselves in good numbers but still seem to be winning the battle…at this stage! The species fishing continued to impress all our guests, the coral heads and other structure teaming with life! Another great day of fishing! 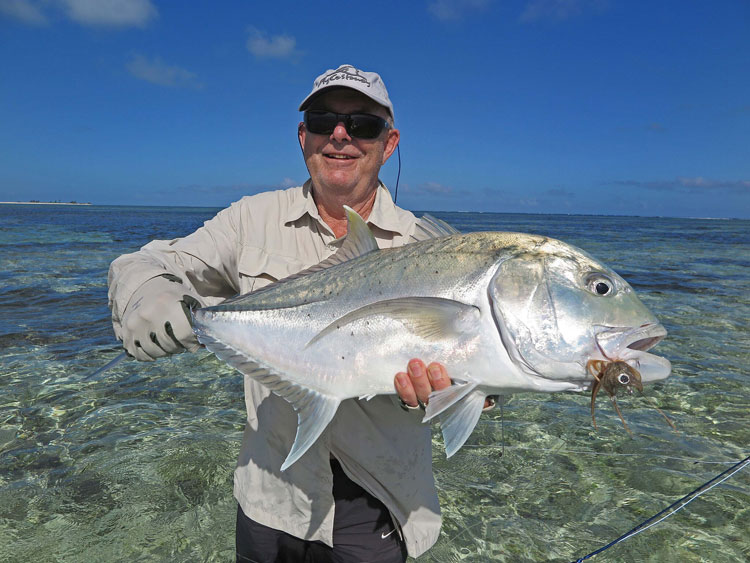 Day 3 – We headed out on a morning dropping tide and a bit more wind blowing throughout the atoll. The GTs presented themselves again in good numbers and the guys managed to get a few to hand. Sadly we hooked some really big fish in the surf but the end results were not in our favor. The Bones were still around in good numbers and were there for the taking for any guest who was in the mood to target them. The Bumpies also started to show themselves in better numbers and were often seen feeding lazily over the flats. A huge congrats to Ivan on his outstanding day of fishing, his Bumphead Parrotfish, Bonefish and GT earning him a coveted Farquhar Slam. Needless to say spirits were high as everyone relaxed onboard after yet a another great day out on the water. 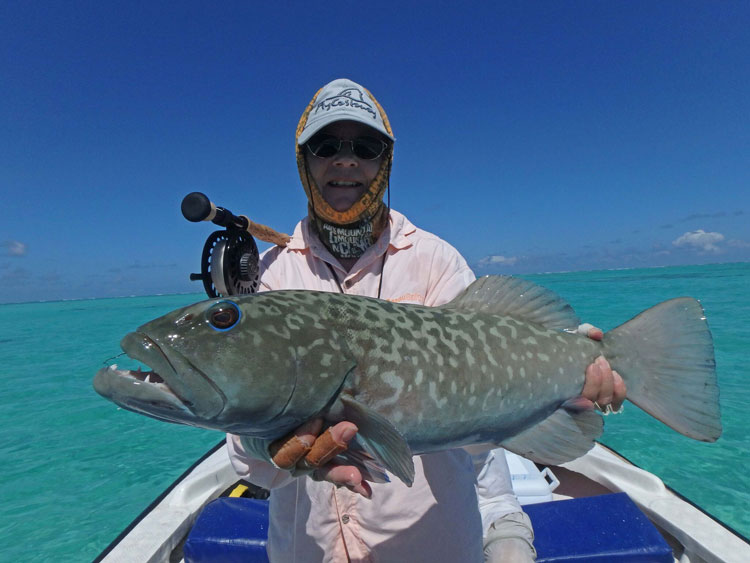 Day 4 – The fishing continued to impress, with good numbers of GTs prowling the flats ready to smash any well-presented baitfish imitation. We managed to land a couple for the day which is all you can ever ask for, but today will be remembered for an enormous fish lost (one of the biggest we have ever seen) whist guide an angler were fishing the surf section on the Eastern side of the atoll.  Heartbreak…but further evidence that Farquhar is fishing well and it remains one of the best places to encounter monster GT’s on foot! The Bonefishing remains outstanding and with good numbers of Triggers around as well provided some superb light tackle action. 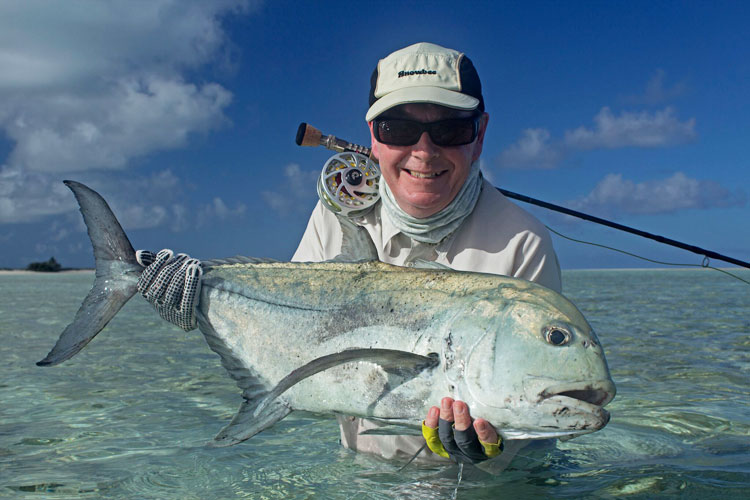 Day 5 – The weather continued to hold and with it so did the GT fishing GT, individuals and small pods feeding hard when the opportunities presented themselves. Congrats to Jeremy for getting our second slam of the week, his GT, Bonefish and Triggerfish rounding off a day he will not forget! After some really near misses during the first few days we made it count on the Trigger front. Jeremy, Christopher, David and Agostino each landed one during another superb day of fishing! 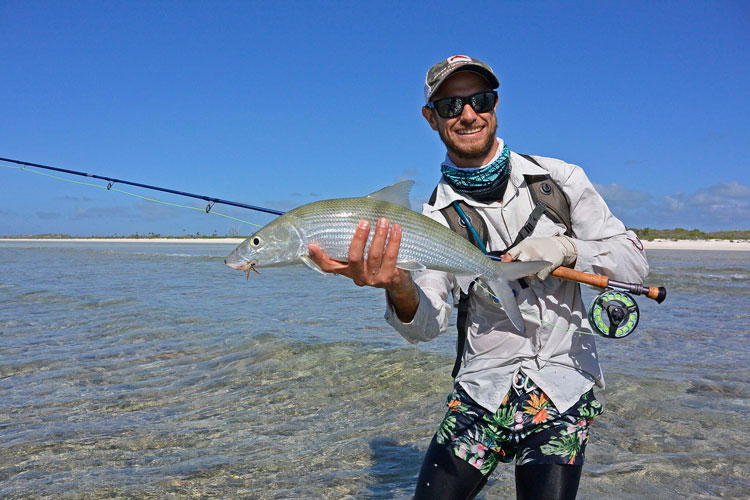 Day 6 – Our final day on Farquhar and our season had arrived and sadly so to had the weather. High winds and tough light made sighting and presenting to fish a bit more challenging, but some of the guests still managed to get stuck into some great fish. Congrats to Christopher on landing our second GT over a meter mark for the trip, his 102cm prize something he had been chasing the entire week. Another hugely special fish was landed by Jeremy, his 117cm Bumphead Parrotfish certainly being a fish of a lifetime and without doubt one of the largest fish you can tussle with on a 9wt.

All in all it was great week of fishing with a great group of people. The atoll is in great condition and ready to provide some of the finest flats and offshore fly-fishing you can imagine. We are champing at the bit to get back out here in Oct, the guesthouse and this incredible fishery certainly going to impress anyone joining us in the next few seasons.

Until Oct 2017 when we start the season all again.

If you would like to join us on any of our weeks Click Here to see the full trip details.