As the Norway Sea fishing season now starts to head into spring and the water temps start to rise, the Halibut seem to be the main target for many anglers. Havoysund is proving why so many people travel there and that is for the first class Halibut fishing it has to offer. We currently only have a couple of weeks left for the 2018 season but don’t panic as we are taking bookings for 2019 but you will need to be quick…..

Douglas, the head guide at Havoysund has sent us this excellent report from this weekend and as you will read the Halibut fishing certainly hasn’t let these lucky anglers down:

What a wonderful week we had here in Havøysund, after the first windy days of good cod fishing and a bit of mix fishing for Wolfish and Plaice, finally, the winds and the sea lay down like a mirror. So we have now been fishing for three days in the glorious sunshine and more or less no wind, almost entirely after halibut, and the fishing has been at sick. On Sunday I guided Thomas and Dan in boat 7 and the plan was to catch Halibut, the size was not so relevant when Dan never fished halibut before catching fish was the most important. The Guide boat and boat 3 fished together in an area we know the fishing is hot at the moment and it took no more than 10-15 minutes before Boat 3 struck gold. The boys in boat 3 were friends with the boys in boat 7 so we went over to them to witness a sweaty fight over in boat 3. Unfortunately, at the landing, the reel jammed and the fish managed to jump the hook at the boat edge and swam quickly down to the bottom again. 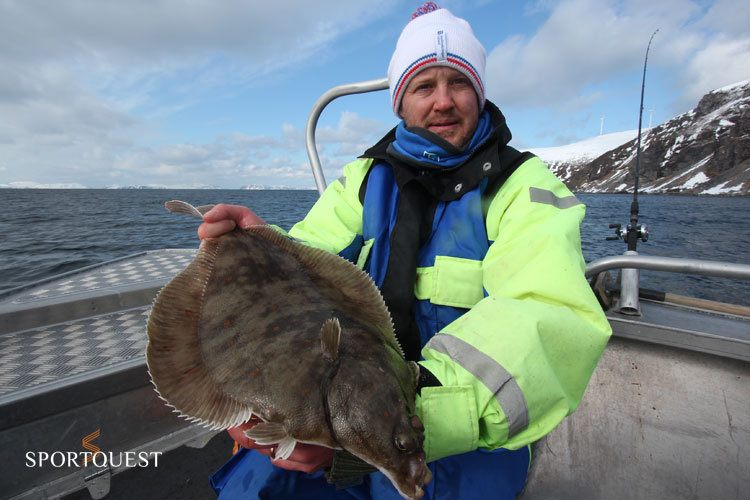 The fishing continued and the expectations were on top, the fishing was slow and the hours rolled on, but a couple of hours after lunch, something grabbed Dans lure. Dan who still never fished a lot before, began to think he was stuck in the bottom, but as often before, the bottom began to move, and as a result, the line peeled off Dans reel. I could see this was a good fish so I told Dan what to expect with the fight. Dan was cool calm and he realised the seriousness. The fight went like a dream and 8 minutes later we saw a really big fish approaching the surface, the landing went well and the fish measured 160 centimetres! The fish got freedom like all the other big fishes here with us at the Nordic Sea Angling. 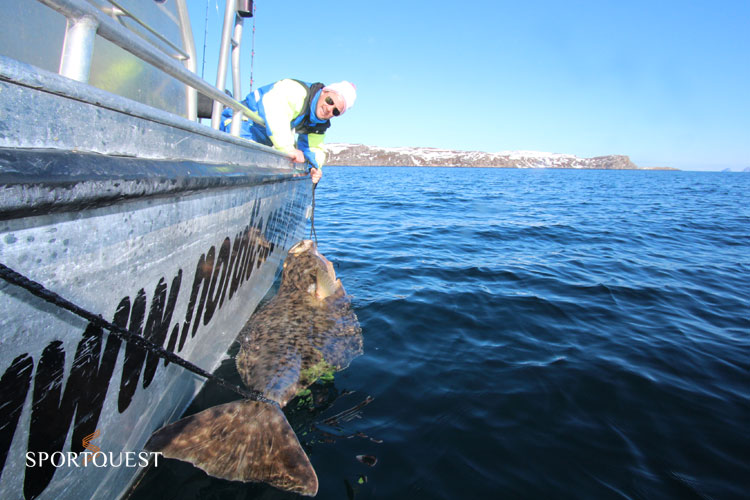 Monday morning it was a good idea to guide the guys from Holland in the guided boat, and unfortunately they had not had any further fish luck the day before, so there was no shock that they would do nothing but fish the Halibut and the goal was that they would catch their first ever Halibut. When the currents were quite right during the morning at the place that had delivered the day before, the plan was to start there and when the stream was calming around lunch, go to an area that has been untouched this spring. The first operation gave nothing but second drift when we slipped over a small fine edge where it went from 30 down to 40 meters, Magnus had the bite and managed to hook in a fish, he was over joyed, as the reel started to scream!!! 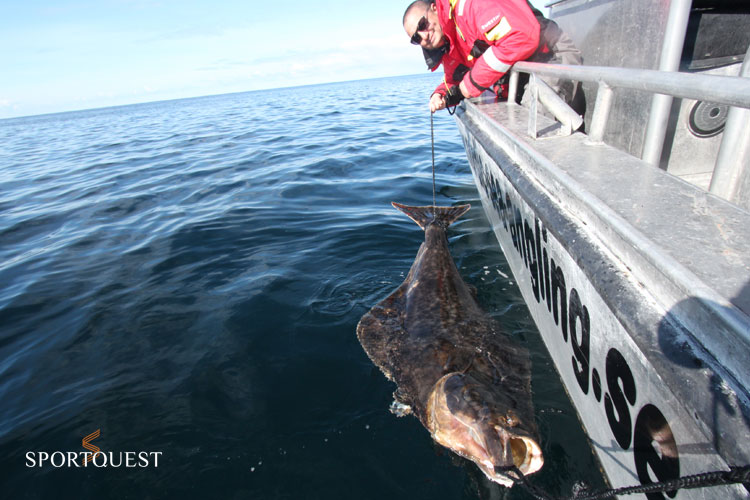 Magnus had a good fish on and the fight was a good one and after 15 minutes he managed to get the fish 30 meters from the bottom, it turned and swam to the bottom again and it started again. But a moment later we noticed that the fish calmed down and Magnus could now finally pump the fish to the boat and after another successful landing we could measure Magnus first Halibut to 162 centimetres! Absolutely unreal first Halibut for the boys this week. 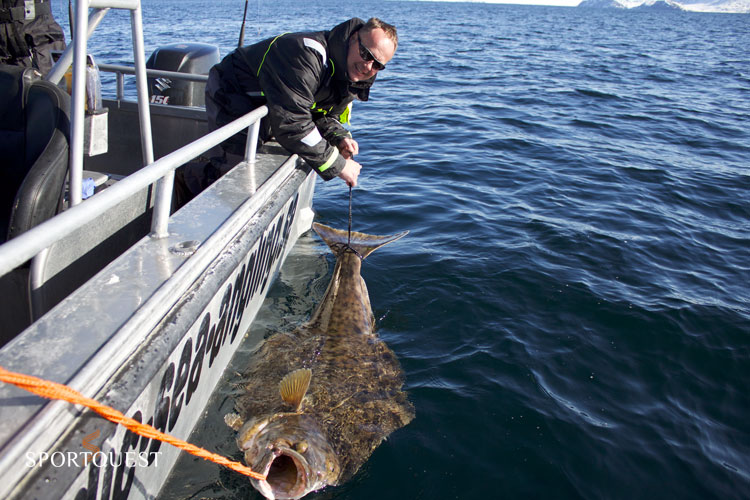 But we continued fishing and according to our plan, around lunch time, we went to another area. After a quick stop to see how the sea went over the area, I positioned the boat to drift over a nice shelf of 45 meters, everything was right and It was just a matter of time before the next Halibut would bite. This time it would turn out to be Christoffers turn to know the forces of halibut. A couple of minutes into the first drift of the new place, Christoffer struck into a fish and even this time it would turn out to be a really big fish, the fish went heavily along the bottom and it offered Christoffer a real game that he will never forget. After a 10-minute tough fight we could call the fish and this time it was ready to land right away and once we had met the fish, Christoffers very first Halibut was all 165 centimeters !!! Like the rest of the fishes, after a little rest and recovery from the fight, it was swim down into the depths.

To add a little extra to the report, the boats went out yesterday to finish the week with another big Halibut, and this time it was Dan in boat 7 who brilliant with a really nice fish of 145 centimeters and this fish got to sum up the week and we can now say that Halibut is in full swing here up! 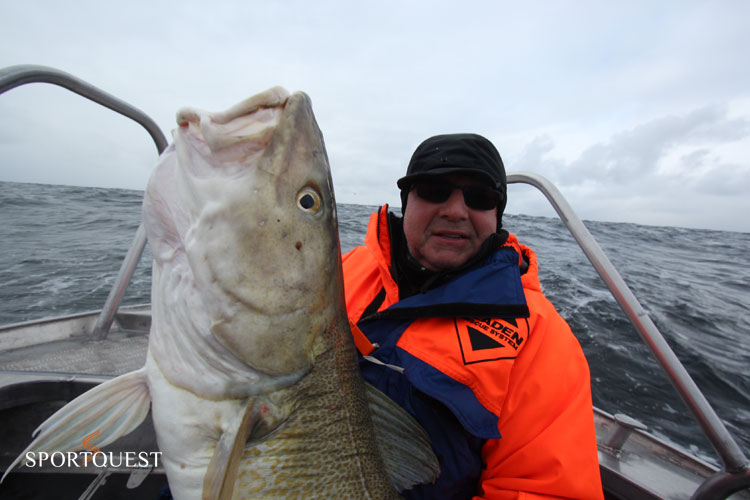 Again huge congratulations to all the amazing fishes from me guys and thanks for a fantastic week!

Thanks Douglas for your report and we are all looking forward to a fantastic season. If you would like to view the full details of this amazing destination in North Norway CLICK HERE