As you may be aware, there haven’t been too many reports going on recently and that is simply because there was nothing to write in my Norway Fishing Report. My fears of the bad winds from the night before have come true and have stayed with us for 2 days now but things are looking good for Sunday and should be back on the water all rested and ready to go 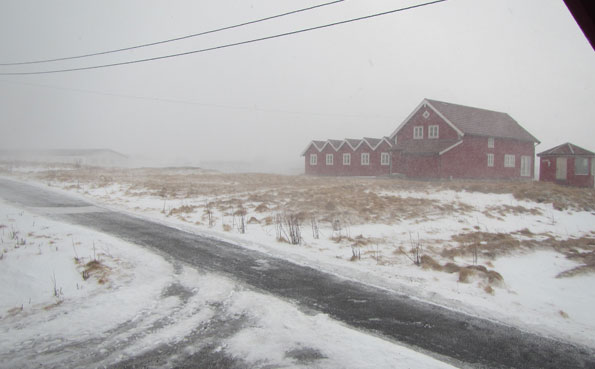 What can i say…… apart from “Thats Soroya” 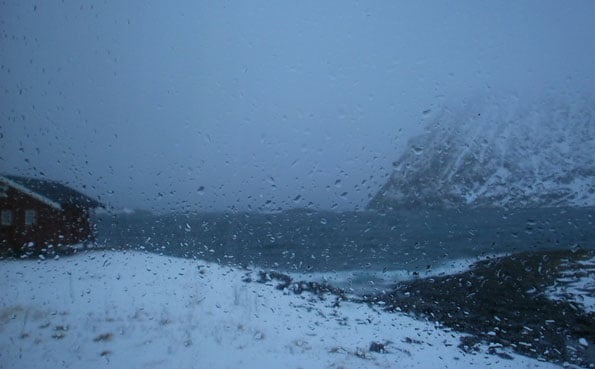 In the first part of this Norway Fishing Report I will briefly talk about Friday and Saturday, CABIN FEVER days, as I like to call them. Once I had got up Friday morning I called the head guide to see what was going on but deep down I already knew the answer as I could hear the wind outside. Sadly he confirmed for me the bad news, which just left me to tell the other guys. So as I climbed down from my bed and 4 keen faces looked up at me as if to say “are we going” I hate this part of my job but I had to do it and gave them the bad news and as I told them, I could see the smiles drain from their faces…… once all the guests had been told and they had taken the news in it was time to come up with a plan B so I suggested fishing from the breaker wall that surrounded the harbour. Normally there are lots of Dabs and big Plaice to be caught so with this in mind we quickly rounded up some bits and pieces and I sent them to a good shore mark for a bit of light rod and reel fishing (well at least it got them out of the cabins) sadly it turned out to be even too windy to do this so a short while later they returned to the cabins very red in the face and fishless…… 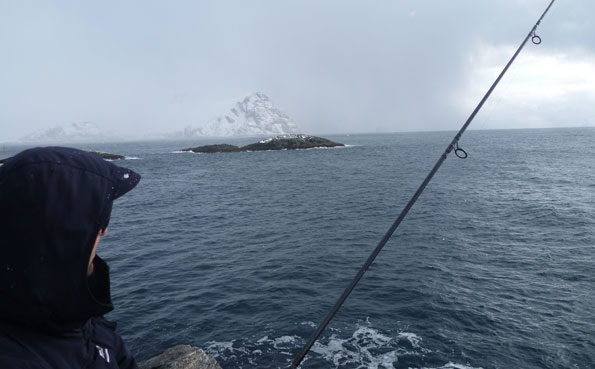 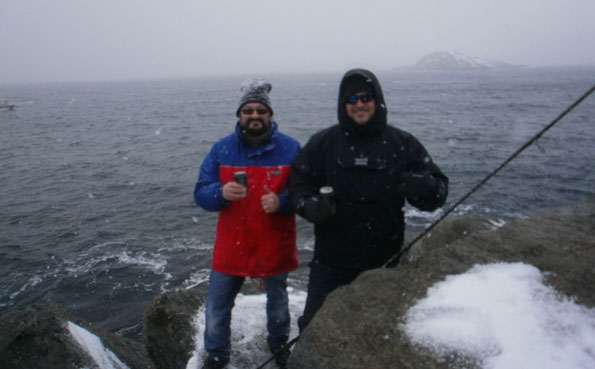 So they had a couple of beers instead 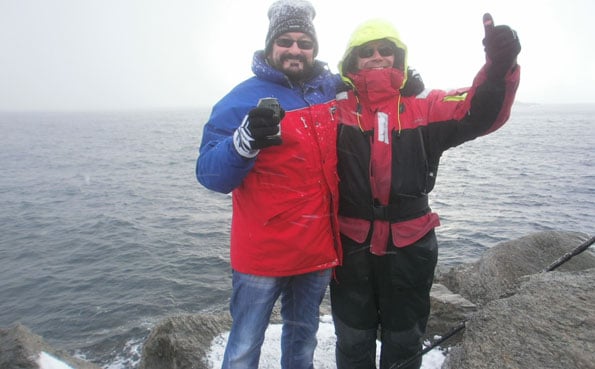 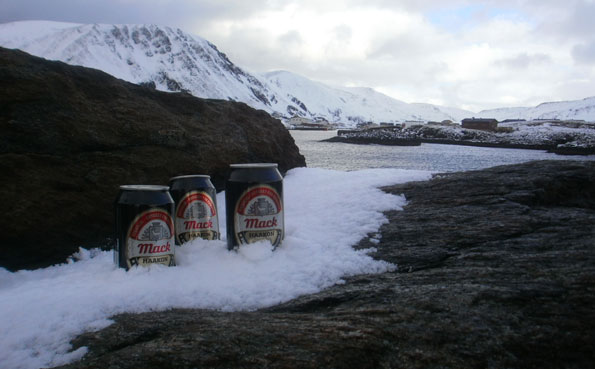 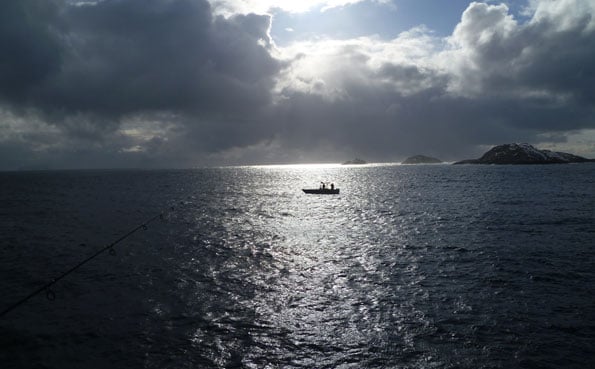 One brave or stupid person fishing just outside the harbour

The guys then decided to do their own things, some went to the shop some went for a walk and some had a sleep. Before I knew it, it was dinner time so I suggested that we go up to the bar for a few drinks then come back for a good feed then maybe a few more beers seeing as tomorrow (Saturday also looked bad) was going to be a cabin day……. As you will see in the next part of my Norway Fishing Report tomorrow looked in fact worse than today, Gale force winds predicted 24mtrs a second, what had I done so bad that the fishing gods were punishing me for????? 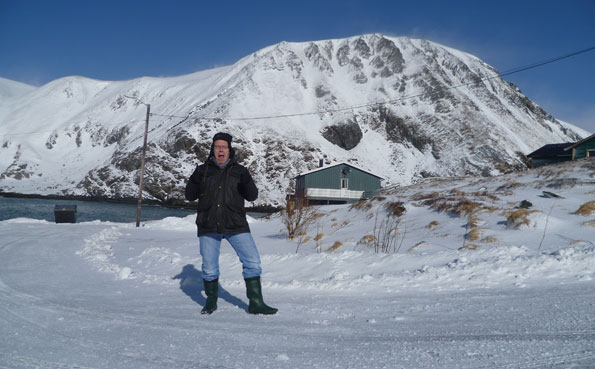 Looks nice but the wind was so strong, check out the snow coming off the mountain behind him 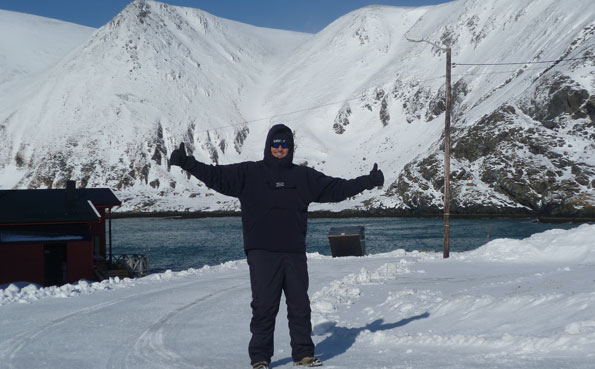 This amount fell in about 30minutes, brrrr…..

The next day in my Norway Fishing Report was Saturday and it was pretty much the same as Friday but windier, to the point where you could lean in to the wind so much so that if it had stopped you would of ended up on your face. Something that I have never experienced in Norway before, I have seen bad winds but nothing like this the cabins were trembling and a few gusts I actually thought the cabins were going to end up in Sweden….. Luckily it was one of the guests birthday today so late afternoon and in to the evening was spent celebrating with a few brandy’s and some good food, this made up for such crappy weather. 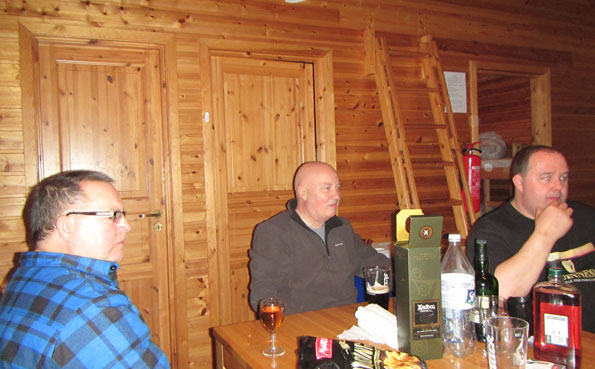 Everyone chatting about fishing and life…… 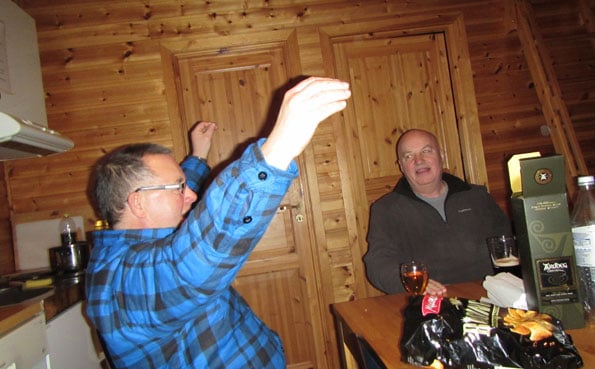 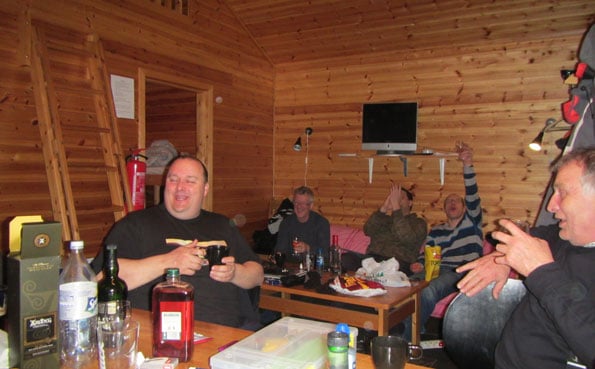 Every one has forgotten about the missing fishing days

Just before bedtime I had a quick look again at the weather and it was looking like we might get a small window tomorrow lunchtime for around 3-4 hours so here’s hoping. With prayers to the weather god’s done it was time to get some sleep

Sunday morning came round very quickly and the wind was still blasting the cabins but there was light at the end of the tunnel. I spoke to the guide this morning and he also confirmed there maybe a small window at around 12pm so make sure all the anglers are geared up and ready to go for 12. With this great bit of news it was time to go and spread the word 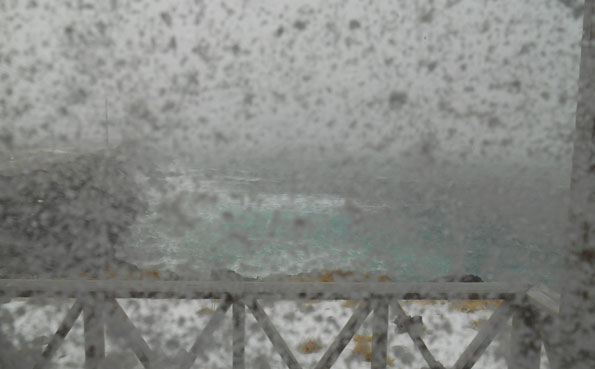 It wasn’t looking too good, but there was light at the end of the tunnel

Every one dressed and hovering around the boats and we were ready to go. Now let me tell you something, I also told all the guys the same, “it’s going to be rough out there but we would see how we get on. If it looks and feels too bad we will have to head in” and with this agreed both boats headed out into what looked like a rough state of affairs……. I have been out in rough conditions so I know what I and the boats can cope with and would never put anyone at risk, it’s just not worth it. So with this in mind we made our way over some pretty chunky waves out to the fishing grounds where we had done so well a couple of days ago. On the way out there I could feel the tension and fear building up in the guys but as I said before I would never take any one out in weather that was too bad. Eventually we made it and instantly found some fish, with the boat put in the right position I told the guys to fish….. This was easier said than done, with the boat riding the waves and being hit by wind it was hard for me to keep it in position, but the guys were doing a grand job and sticking at it 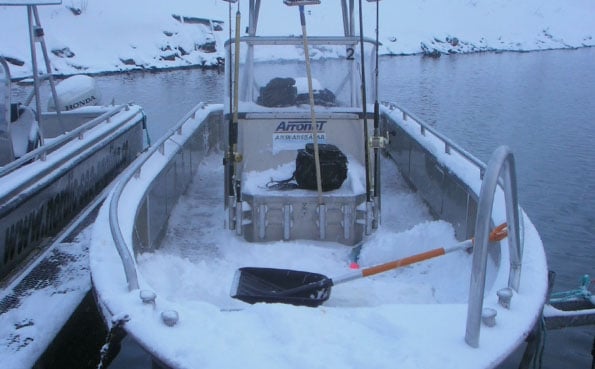 First job was to shovel out the snow…. 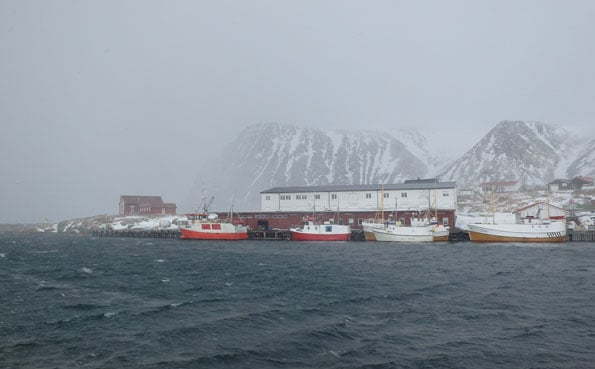 This is just the sheltered Harbour, what was the sea going to look like? 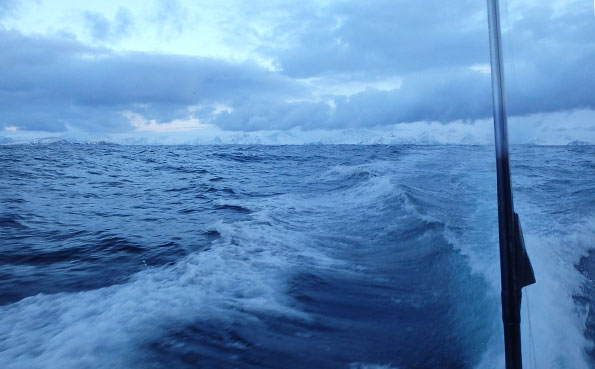 It is hard to appreciate how rough it was 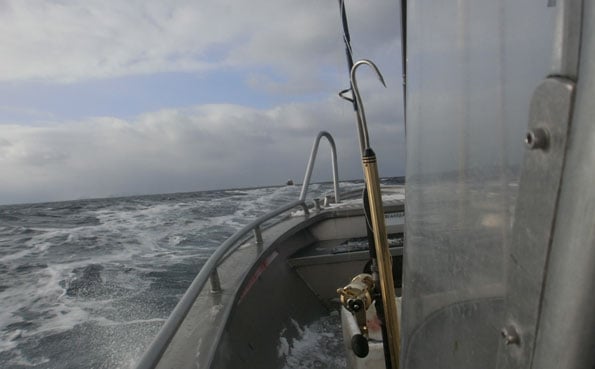 Trying to keep up with the twin engined guide boat

If you have ever fished in weather like this then you will understand that it is hard, there are so many factors that are against you. First you have to deal with only sitting down and fishing then there is the fact that no matter how much I had the boat in reverse it was still being pushed forwards way to fast and we could not keep in contact with our shads. We were fishing in around 50mtrs of water but had over 100mtrs of braid out and still not on the bottom, but we were fishing and not in the cabins. 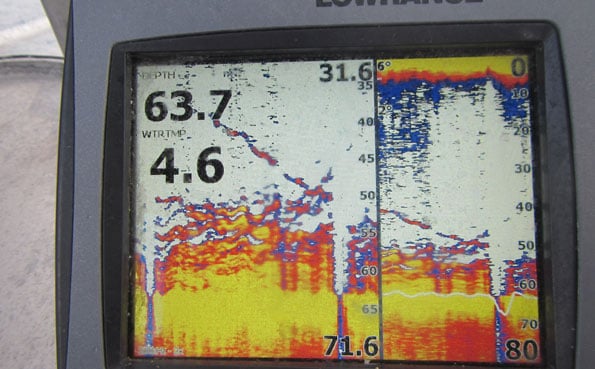 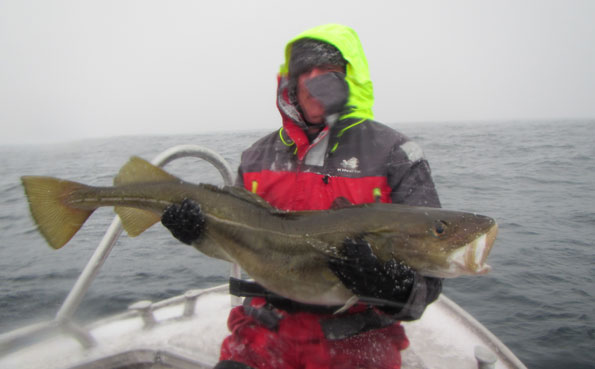 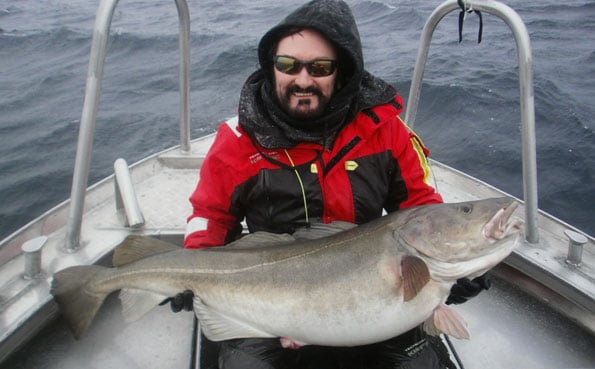 They were doing so well to stick at it 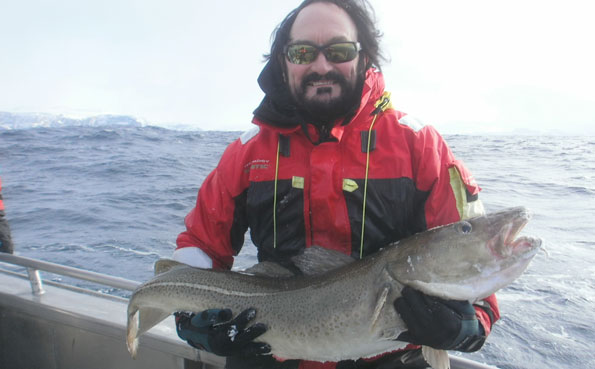 I think it maybe time to head in guys…..

After only half hour of fishing I had a call from the guide boat saying that his guys wanted to go back in….. I turned to my guys and asked the same question and without even thinking about it they all agreed that it was just not worth it. With this in mind I told them all to reel up and we were going ashore. I looked at the sea and knew it would be a bumpy ride, I took it slowly and arrived back at the harbour over an hour later, a trip that should of taken 15minutes. 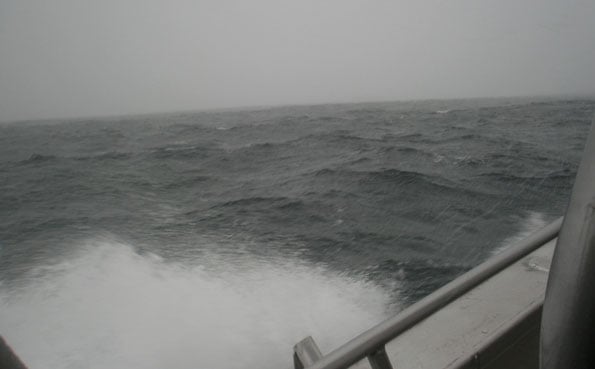 The ride back was long and very bumpy, they were glad to get on dry land

All I could say was “We tried” and I think they were going to be pleased to be on solid ground again. After we had taken off the flotation suits and made our way back to the cabins, the first thing I done was to check the weather report for the following day and had some very good news to tell everyone “Tomorrow was going to be fishable all day so get some rest and we will start at around 10am and fish through to late in the evening” The wind was due to die off to almost nothing at around 6am then change direction and blow from the east, this direction is what I have been waiting for since their first day’s fishing, it will flatten the sea off very quickly and will make it an enjoyable last couple of days 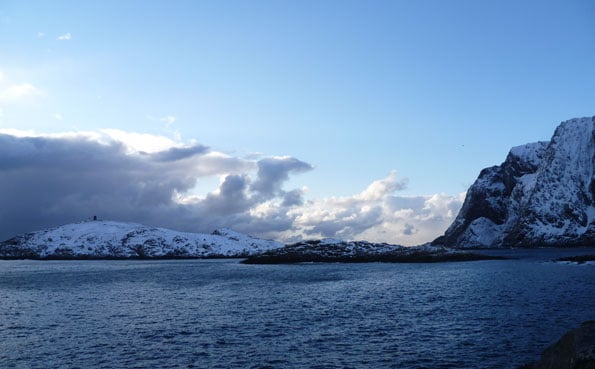 So with dinner cooked and a few beers later it was time to do a little work and hit the sack ready for the following long days fishing. So until then Tight lines