Our Head Norway Shore fishing guide John Strange has been busy writing some cracking articles recently and this one is no different. He has gone in to some detail about the attractions towards Cod fishing in the UK plus what pulled him to fish the Norway Coast line.

We have some cracking dates available for 2017 so if you fancy fishing with this hugely popular shore fishing guide then act fast as dates are flying out. If you would like to know more about our trips then call the office on 01603 407596

For many of the UK shore anglers there’s only one fish that really gets us all congregating on cold windy shorelines throughout the winter, and that’s the Cod.

We seem happy to spend hours staring at motionless rod tips with the rain or sleet lashing down into our faces, just for that one chance that a big hungry Cod will pick up our bait. We’ll stay out all night if that’s what it takes, wearing thermal layers and expensive waterproofs to keep us warm and dry.

We buy the best headlights we can get our hands on, state of the art fishing rods and reels and invest many hours at home preparing rigs and equipment. Once fishing we work hard at keeping decent baits going in the water. Sadly, all too often it’s a fruitless task, either with a small codling or nothing at all to show for our efforts. But, every year, a few lucky anglers hit the right spot on the right day with the right tackle and they catch themselves a good-sized Cod. It gives us all hope that maybe, just maybe it’s going to be our year and we’re going to be the one with that “double figured Cod” and all those long hours invested will all be forgotten. Indeed, it’s a fantastic achievement to catch a Cod over 10b from the UK shoreline. Lots of anglers have never caught a double, but there are a few anglers who seem to be consistent in finding them. This mainly comes down to a couple of things. 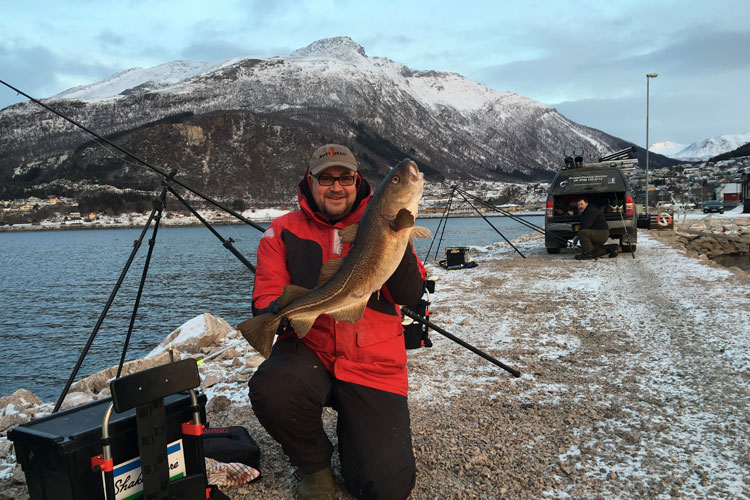 The first one is rod hours. You need to be prepared to put some serious hours in to get the best chance.

I’ve personally landed my fair share of decent cod from UK shores and I know it’s exactly that combination of hours and local knowledge, which has led to those captures. I was happy every winter for over 25 years from October until April to put serious hours in chasing my quarry, mainly in the Bristol Channel but also around the southern UK coastline.

Then one day I stumbled upon a report on an online forum written by Phill Dale of Skarnsundet in Norway. He’d popped out to his local fishing mark and had landed just 2 fish in 1 1/2 hours, however, those 2 fish weighed 17lb and 27lb! I immediately looked at his previous reports and noticed he’d landed more big Cod single handily than I’d heard of being caught from the whole of UK shores that entire winter! 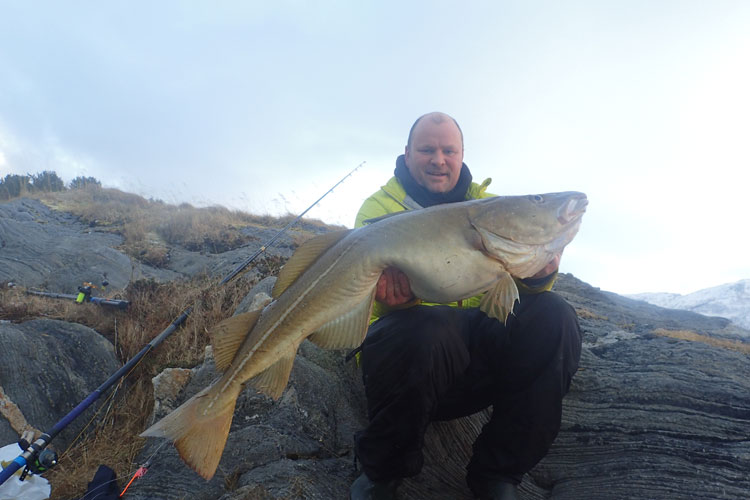 It didn’t take me long to get in touch with Phill and a couple of months later I found myself fishing alongside him for 10 days at Skarnsundet. In my first 5 days I caught “a double a day” along with good bags of 3-8lb cod. I was in heaven! I also fell in love with Norway. I thought that scenery was stunning, the wildlife abundant and the fishing was world class. Very low crime rates, minimal traffic, the joy of being able to drive into a small town and just park the car and fish without fear of traffic wardens and seemingly endless places to fish meant that I was already planning my return visit before I had even set foot on the plane home! Phill really opened up Norway to the UK shore angler. His base near Straumen, Inderoy still attracts many UK shore anglers every year. We all owe Phill a huge debt for this.

“Once John started fishing Norway he never looked back”

I also made lots of new friends and we started planning our trips together. I found myself putting in many hours/days/weeks of research before each new trip. Studying sea charts and geography, trying to create a list of “possible” marks for our group to try. If for example you started with perhaps 20 potential marks which looked promising on the charts/maps, 15 of them will be unfishable due to either access problems or hidden underwater snags, 3 or 4 might be good but only on very certain tides or conditions, and 1 or 2 could be fantastic once you know how to fish them. Anyay, over the following years we made increasing amounts of trips to Norway, visiting Phill and we also venturing further north, spending multiple weeks/months at Bessaker, Flatanger, Senja and eventually Saltstraumen, and it was at Saltstraumen that we really found what we believed to be angling nirvana. 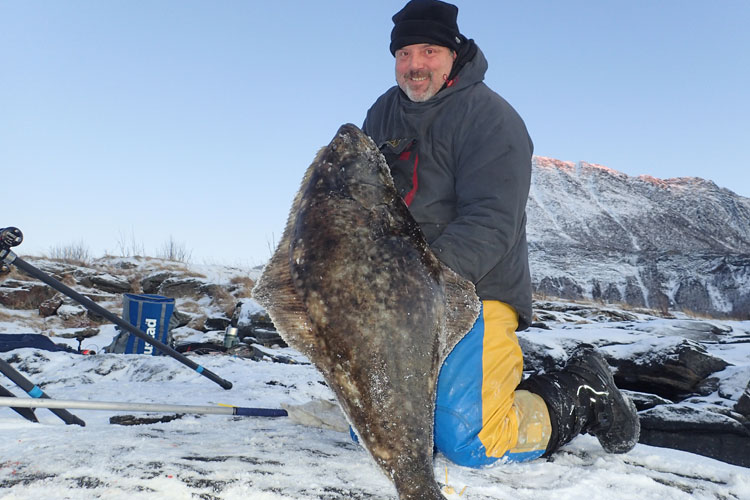 It’s a lot different to what many shore anglers are used to in the UK. For starters you’ve got the world’s fastest tidal currents in Saltstraumen itself, with depths ranging from 15-150 feet and currents up to 26mph, it can be a difficult place to fish and local knowledge is paramount, along with an understanding of how to fish in strong tides, deep water and sometimes both together. . Then you’ve got the surrounding fjords that house a huge variety of fishing marks, some areas we have fished into 800 feet of water and fought big Cod all the way up! This in itself is a completely different type of fishing to what most UK shore anglers are used to. 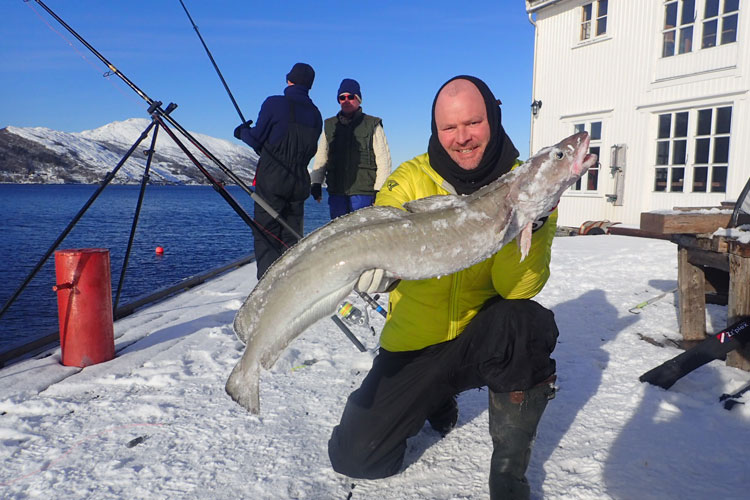 Beyond Saltsraumen itself, the surrounding Fjords and the deep-water marks you have the open sea, where you have sheltered bays onto sand and rugged rocky headlands into deeper water.

It can be a daunting task knowing where to fish with such a huge variety of places to potentially wet a line. There are so many factors to think about, but when you get it right the rewards can be fantastic. My best UK catch has been 5 cod for almost 50lb, which included a few doubles. But one session in Saltstraumen really puts into perspective the areas potential: – During my first visit to the area I tried a new mark and landed 27 Cod including many doubles to 22lb. I also landed a 25lb Cod a few days earlier at a different mark along with numerous Cod over 10lb! It’s not all easy pickings, I still had to work hard for these fish and spend many days trying and writing off lots of marks, but the rewards compared to the UK were exponentially higher. More double figured cod and bigger cod than I’d encountered over all my many years shore fishing in the UK. 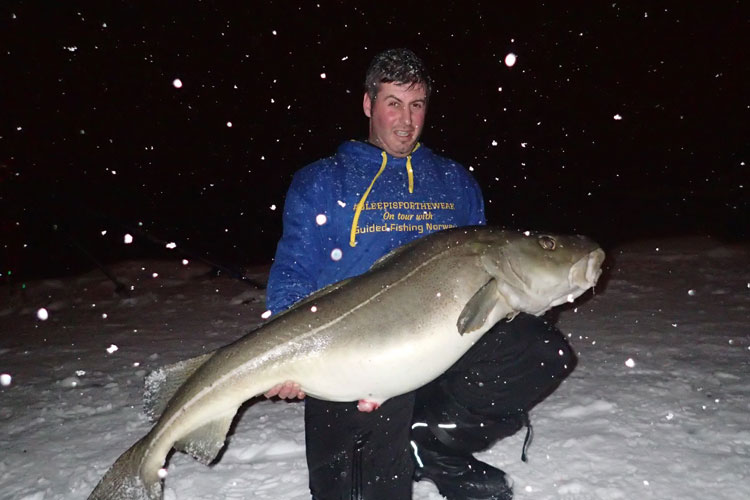 Since that first visit, I’ve been returning to Saltstraumen each year and to date have landed myself cod to 35lb and have guided anglers onto some mind-blowing captures, including one angler who landed a 43b cod on his first night, he had been shore fishing for over 40 years and who’d never landed a double! Then, probably the most famous being the new world shore caught record of 66lb 8oz landed by one of my guests!

“An unbelievable Cod caught on one of John’s guided days”

But even now I would be happy to spend a cold February night on a windswept rock in the UK waiting for a cod to swim by and sniff out my bait. Whether in the UK or Norway, my expectations are always high, but in Norway, they are high for a very good reason!

To view this amazing destination in North Norway Click Here