What a great report just sent to us from Head Guide at our Nappstraumen destination on the Lofoten Islands, Norway. Three very well travelled anglers from Switzerland had to try the popper fishing for the Coalfish that has been reported recently and below is how they got on:

It’s not every day that one gets visited by three enthusiasts who travelled all over the land, fished the most exotic species and visited places that most people only dreamed about. The passion of these men is about Surface, popper fishing for tropical destinations, but now they had three gentlemen from Switzerland have become aware of our unique fishing for Coalfish in Moskenesstraumen. We started from Nappstraumen and had a few days available when they arrived on Tuesday afternoon.

We rigged all the equipment, fixed spool reels, rigid rods and poppers in various colours and sizes. The first day was too windy so we spent it in sandy bays around Nappstraumen in search of halibut. Equipped with small jigs spin we fished the bay after bay and landed a fish just under the measure and had a few contacts and a follower to the edge of the boat. 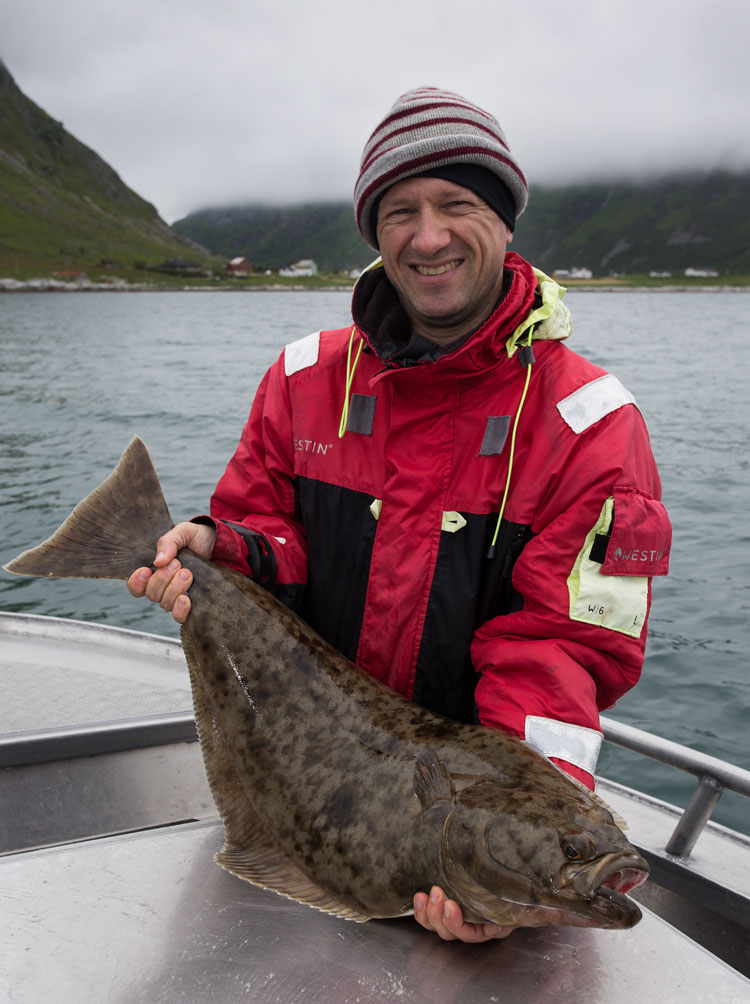 When we left the harbour during the second morning of our first long trip down to Moskenesstraumen took at the south side of the Lofoten down and despite a bitter north wind was still and the sea voyage went down like a dance. After about an hour we were in place and gentlemen were also incredibly curious sea flat giants. Because the power was optimal for halibut, we start with some quick drives on a basic platform in the stream. It was not long before the first blow came, but unfortunately the fish came off

A couple drives later, it was time again and on a Crazy Daisy with curly tail sucked it properly and a heavy fish was hooked. The fish did not make much fight and was easily defeated and secured at the edge of the boat. The fish was nasty and the measurement showed folding rule 138 cm. What a start to the fishery and really nice to crack the code directly. The stream accelerated more and after a further drift and Etienne captured a neighbouring Wolfish of 6.5 kg was time to move toward sejtopparna. 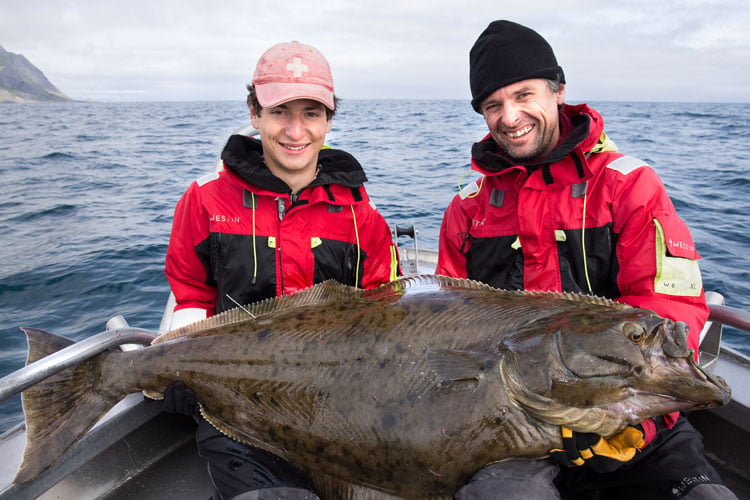 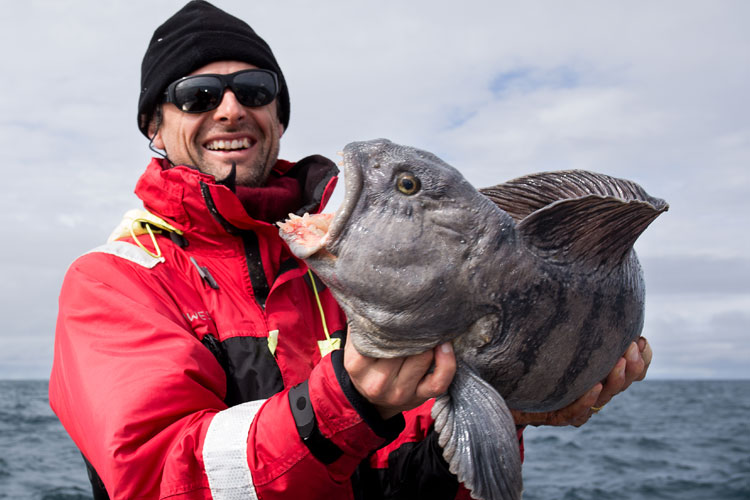 Directly upon arrival at the peaks due sonar showed a lot of fish but they were deep and did not rise, despite persistently throwing poppers they did not come to the surface. Instead, we tackled the wobblers and trolled in 3-4 knots between the peaks. This was really the method for the day and triple stab after stab triple from Coalfish of 7-15 kg followed one another. In the long popper rods became spectacular fighter and we chose to unhook the most of the fish at boat side for gentle handling. We used the Westin Platypus SW, a wobbler that will be on sale in Å soon. 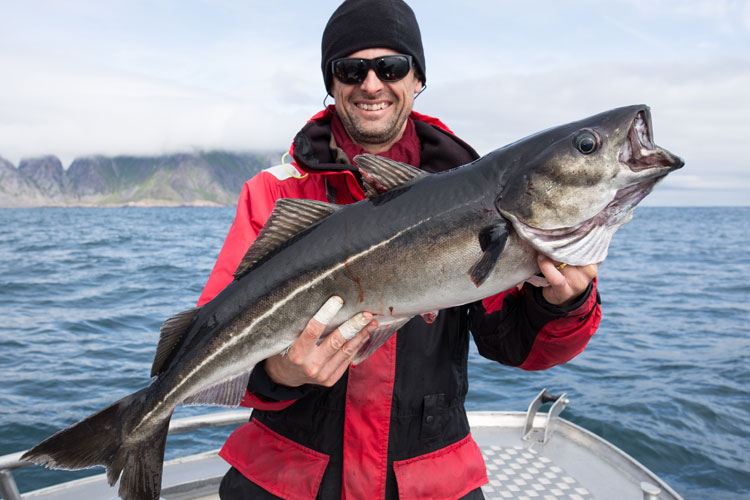 The next day was even better weather and we timed the tides of our departure from Nappstraumen. Also today was the sea completely still on the south side and just like the first day we started with halibut. However, we had a lot of bad luck during the second day of halibut fishing and dropped two really big fish, one of which rushed out of the deep edge and slammed the line. The second came off also in a rush, but this time it was the hook bracket which gave way.. We caught although a smaller fish at 79 cm before the birds signalled that Coalfish hunted in the area. At high speed we set course for the basic ends and now the fishing was going. It required, however, a lot of technique and finesse to get them to rise to the surface but with long pauses and careful paddling we got Coalfish after Coalfish doing acrobatic jumps for our poppers. We finished fishing late at night and steered the course toward Nappstraumen with very big smiles. 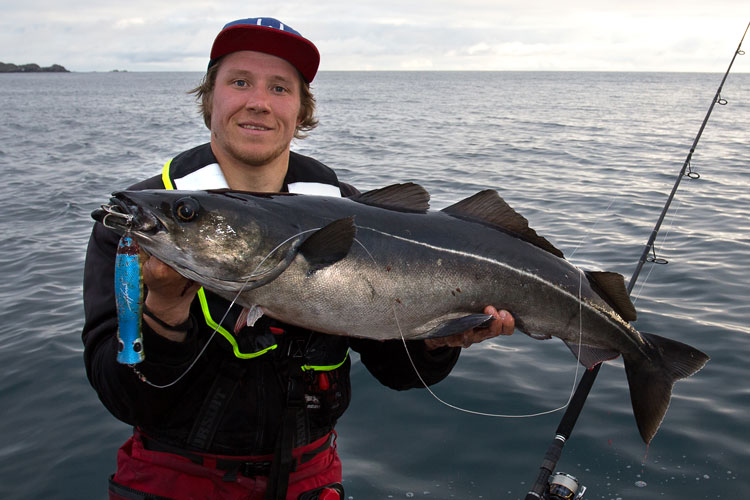 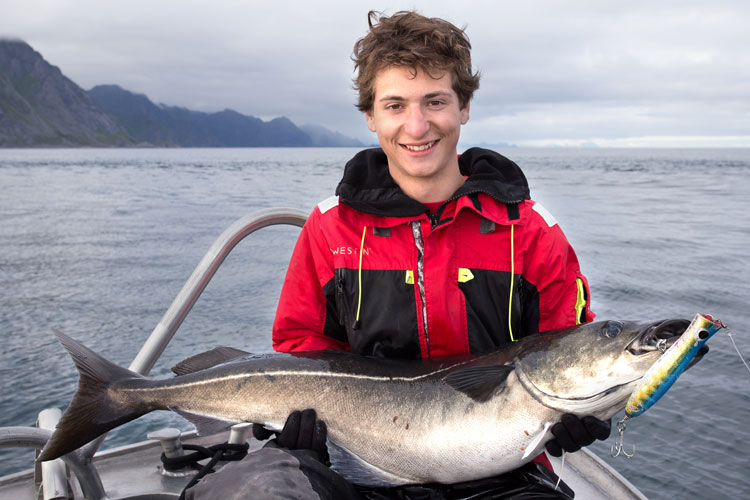 The third day was also our last day in Moskenesstraumen and began just as before, but after yesterday’s success at sejfisket focus was more focused on a revenge on halibuts. We chose to fish with mackerel and put our drives with great precision around the edges and tops to optimize the chances. Suddenly the sky was filled again with the birds, and in the distance you could see that the surface was worried about because the peaks and we could not keep the focus on halibut when we knew what was happening on the basic tops. If fishing the second day was good, it was absolutely incredible during the third day when we arrived due to the peaks. In all the throws in one hour we had contact, followers, fish chased and missed our poppers and we landed about 15 Coalfish around 10-15 kg and a truly neighbouring state of fish around 16 kg of Etienne. 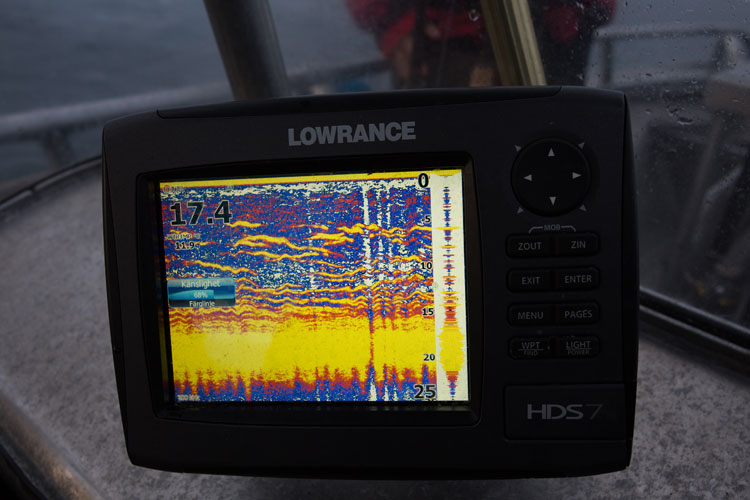 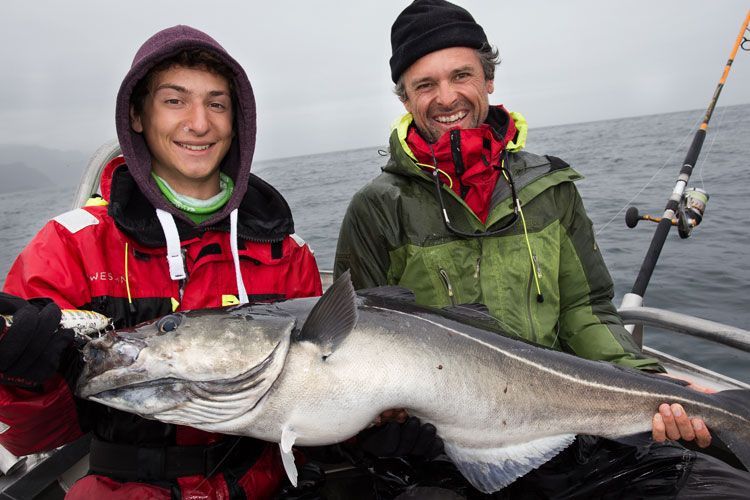 Just as quickly as it started, it was over and we headed for halibut locations again for one last effort. On a baited mackerel on an anti-twist rig and felt a heavy blow and during the fight, it was not initially big we decided .. The fish struggled on extremely well and the thoughts went away how big it really could be. The operation was heavy, around 2 knots and this really took advantage of the fish to his advantage during the first 5-10 minutes of no movement before it suddenly gave up and began to kindly follow the surface. It suddenly felt like a completely different fish at the other end of the line at the edge of the boat and we were able to secure a very deep and broad fish at 141 cm. Sometimes you can really fool and you never stop surprised how powerful these fish really can be. This fish had to finish our expeditions to Moskenesstraumen for this time but there will surely be more opportunities for this in the future. With only an hour’s boat ride along the south side you can easily reach the fishing grounds from Nappstraumen and is a perfect opportunity for those who want to try this fishery but at the same time assume Nappstraumens weather-protected location. 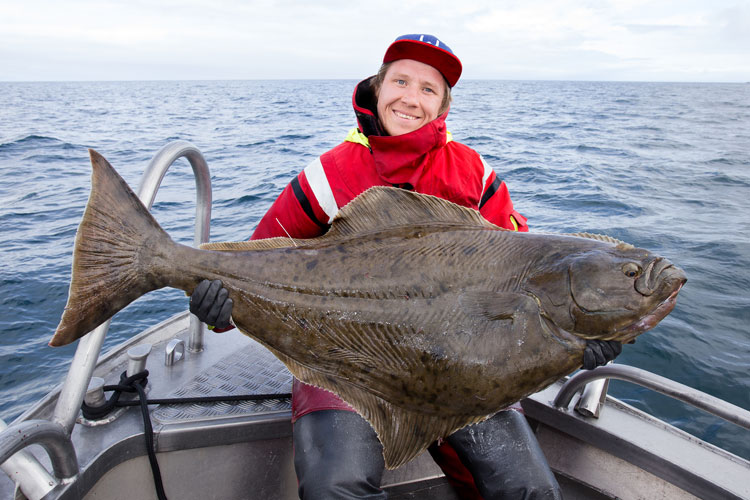 Thanks Erik for sending us this awesome report on the fishing around the Lofoten Islands. We have all heard about the amazing Halibut fishing of recent and we are sure that this year on the Lofoten Islands will go down in History for the amount of huge Halibut it has produced.

We have very limited spaces available for 2017 so if you fancy fishing some of the best waters in Norway for huge Halibut and the very impressive Coalfish then simply call us on 01603 407596.