Fishing Report Sri Lanka are going to start a frenzy, as many people still have not heard how good the fishing is. One day you could be doing battle with 40kg GT’s then the next a 60kg Dogtooth Tuna and then finally a 100kg Black Marlin…. Yes Sri Lanka has it all and to top that we have the best saltwater guides to put you on these fish time after time. Don’t believe us? Then simply check out the below report: 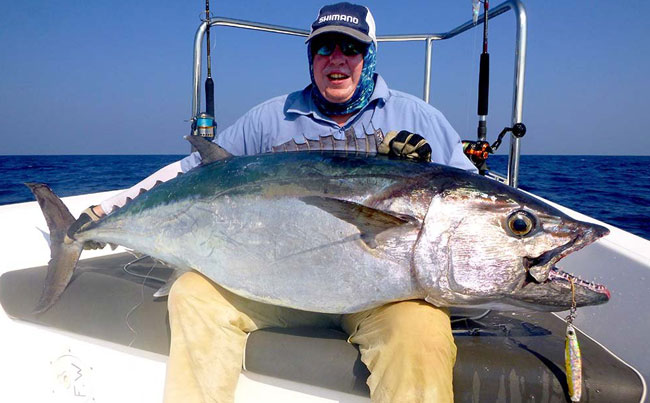 A truly amazing trip was in store for the four Norwegians. Landing in Colombo, the journey started towards Kirinda and its big fish waters. Being greeted with bad weather, they seemed a bit worried when we met them in the hotel in their arrival. We assured them that the rain was just temporary and their faces filled with relief.

At 08:15 the next day we set off out on the open sea to pop and hopefully hear some Stellas screaming and poppers chewed to bits. But their first day was slowly taken over by a brewing storm coming closer and closer on the horizon. Fishing Report Sri Lanka 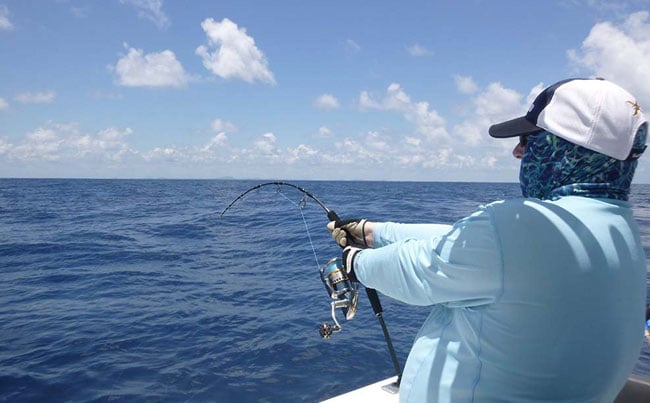 Having had a slow first day the group decided to go jigging on their second day, hopefully catching something Grande. Right away the first spot and the deep, dark blue water started giving results with some nice Amber Jacks. 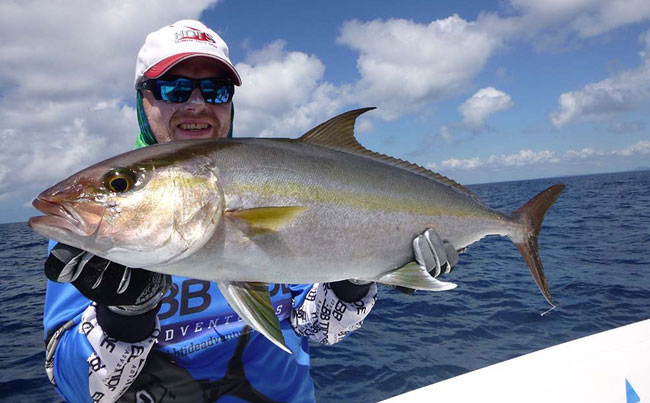 The next spot also had activity, but instead it was the trevally’s that gulped the jigs. Suddenly a hard bite on his jig and the fish gets hooked on his single, barbless assist hook. Fighting very slow everybody wondered what kind of fish it might be. Seconds later a 200lbs Black Marlin breaks the surface and after little seconds we all realized what had happened. 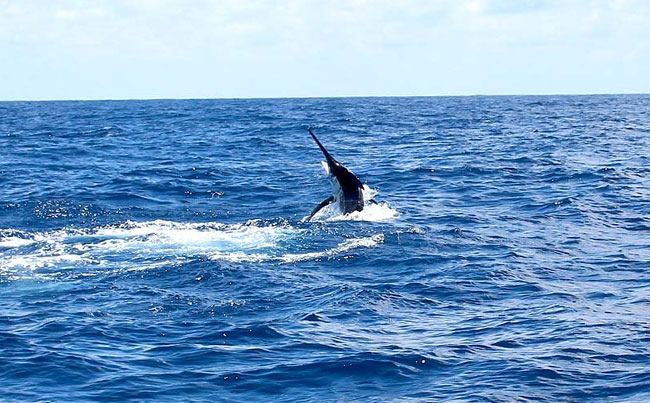 The fight was incredible with between 15-20 jumps and at the same time Nico trying to manage the fish between a curious local fishing boat and a big container ship going by just a few hundred meters from us. After 35 minutes the jigging rod brakes, leaving him with only one guide left on the rod. Fishing Report Sri Lanka

The hard fight continues for yet another hour with the fish sometimes as close as 15 meter from the boat until his 130lbs leader breaks and the fish returns down to the deep.

At the last jigging spot of the day before going popping, another gets a strong bite at 60 meter, ripping the rod out of his hand sending 1000 Euro down in to the deep. 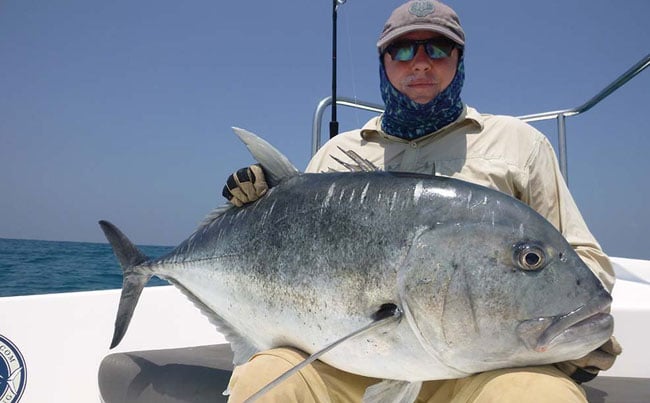 Ending the day with popping delivers a 25kg GT.

The next two days the activity increased, especially on the jigging spots with some nice grouper, Amber Jack, Gold spot trevally and GT.

After a few hours of jigging a Shimano Stella starts singing. Something big has once again taken his jig. After many fast runs we finally see a big Dogtooth Tuna surfacing. He can proudly pose with a +40kg fish in his lap. 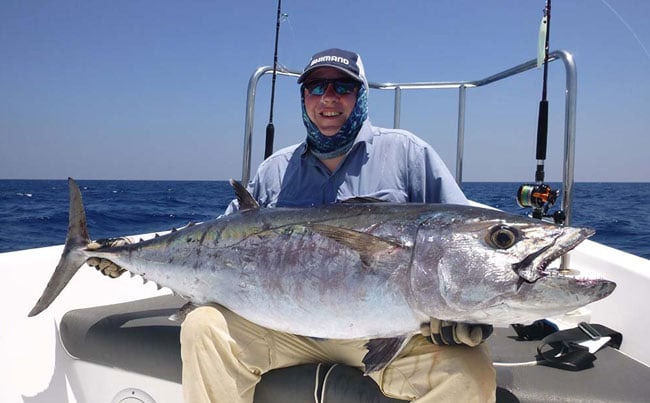 The fifth day arrives with sunny weather and a flat sea. We make the decision to try completely new waters and it’s an exciting feeling on-board. Right away we spot a lot of birds on different locations circling over hunting bonito.

Going between jigging spots we spot hundreds of birds, bonito and skipjack everywhere, aggressive Yellowfin Tuna all surrounded by hundreds of dolphins. We manage some great fishing for Yellowfin on popper before going to the next jigging spot.

Well at the spot the sea is packed with fish and every drift gives several fish. We once again set the hooks into something big and the trusted Stella starts screaming once more. Fishing Report Sri Lanka

This time the fish fights even harder than the “doggie” of +40kg and we start wondering what it might be. Surfacing minutes later is a beast of a Dogtooth, landing at 64kg!! 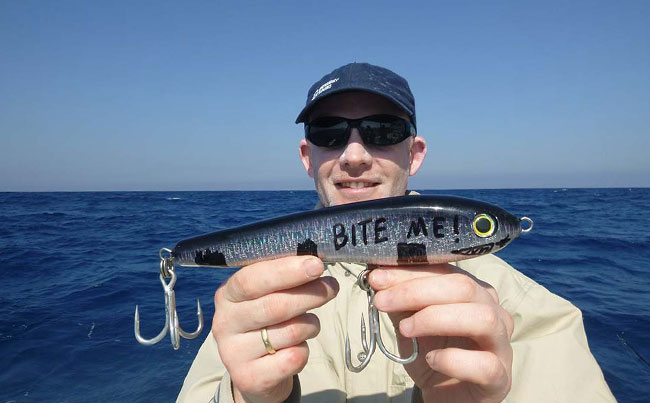 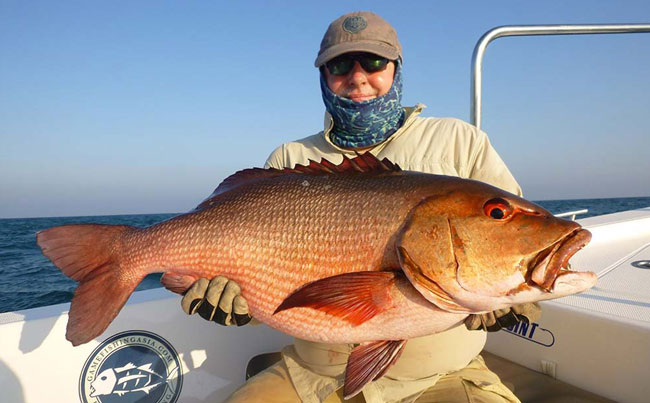 Don’t just come to Kirinda for Popping, bring your jigging rods with you as well and the results can be amazing. New spots and steep drop offs are being found all the time and the fishing just keeps getting better.

Wow is all we can say about this report, Sri Lanka is truly the place to head to for a massive selection of hard fighting species and believe us when we say that you may want to go to the gym first. We still have some peak weeks left for later this year and the start of 2016 so if you think you are strong enough to do battle with these fish then call us on 01603 407596

Hope to speak to you soon, until then tight lines