As you may of seen in our newsletters and on our website, we are currently running some single angler weeks in a few of our destinations. These have been put together purely so anglers can visit these sorts of places alone with out having to pay huge supplements, we never realised how popular they would become.

“Singles weeks released for the rest of the season”

The most popular destination for the single angler so far is Sri Lanka, we didn’t realise how many of you wanted to got to this destination and did not have any one to travel with. We do have a few weeks left for the 2017 season, which will be at the bottom of this report and if you would like to go popper fishing for huge GT’s then act quick as they are flying out the door. You can call us on 01603 407596 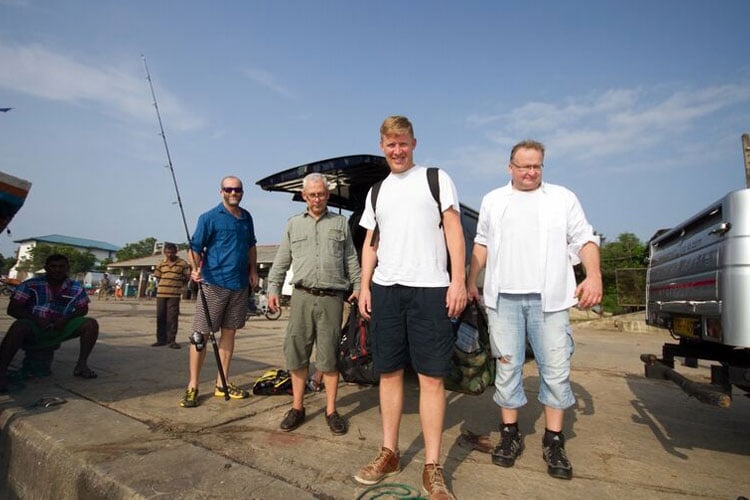 The group meet for the first time

The below report was given to us from the latest single angler week and by the looks of it they had a trip to remember:

For our second single angler group of the season we had Ian, Bas, Mikko and Essa join us in Kirinda. It was the first popping trip for everyone involved and expectations were high. What they didn’t expect was the amount of work involved in Popping and Jigging! We had beautiful weather for most of the trip with sunny skies and flat seas but conditions were on the tough side for fishing the water. Visibility had deteriorated after some heavy rain fall and the lack of wind and current made for some long hot drifts, but the banter and jokes kept the boys going and they toughed it out and had some great results. 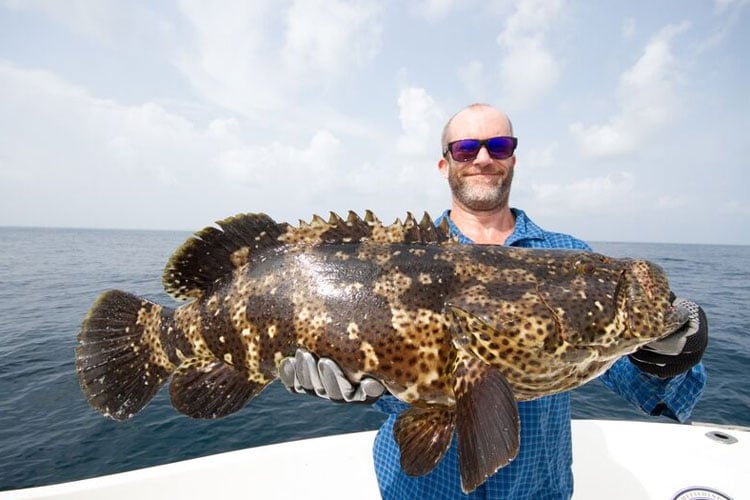 Ian’s first fish of the trip 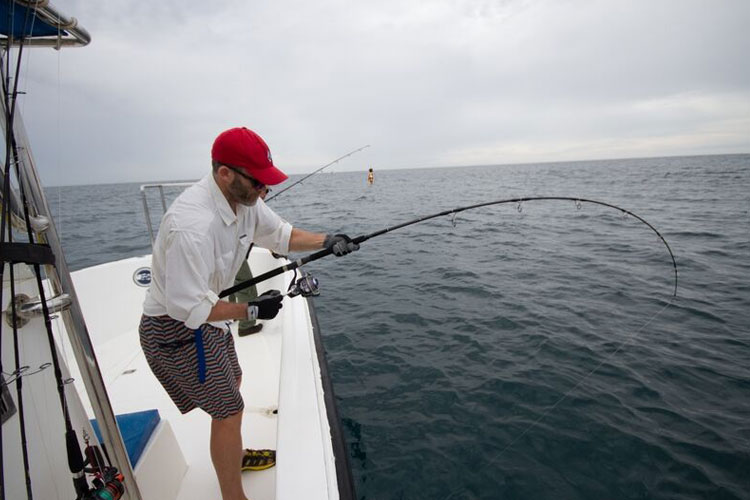 First experience of how hard a GT fights 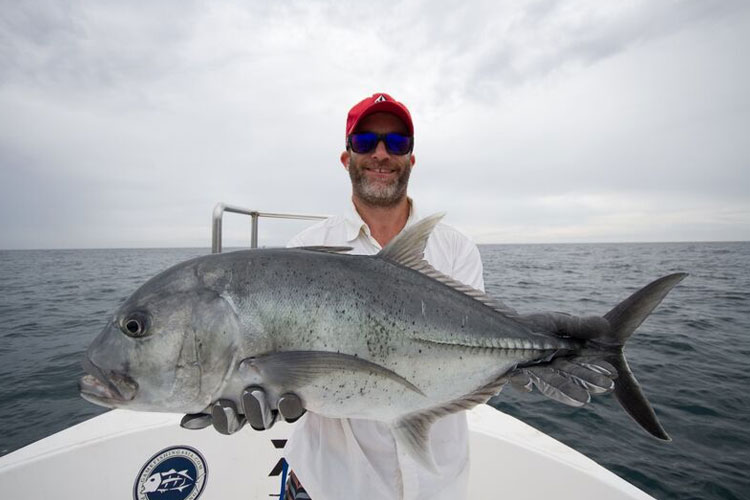 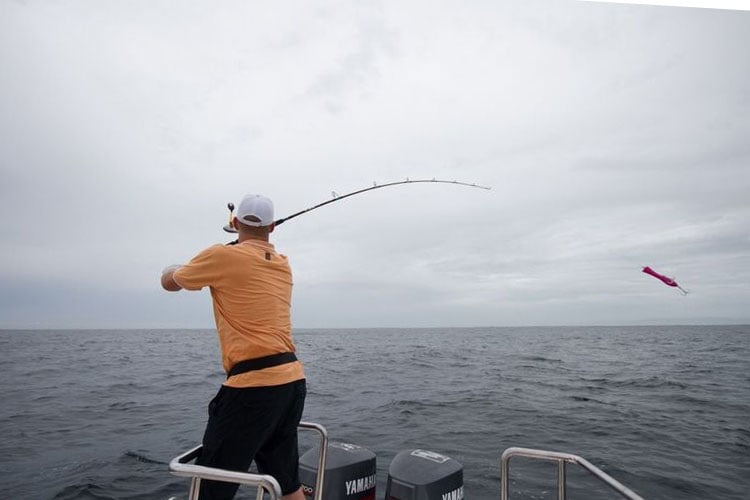 They never realised how much effort was needed 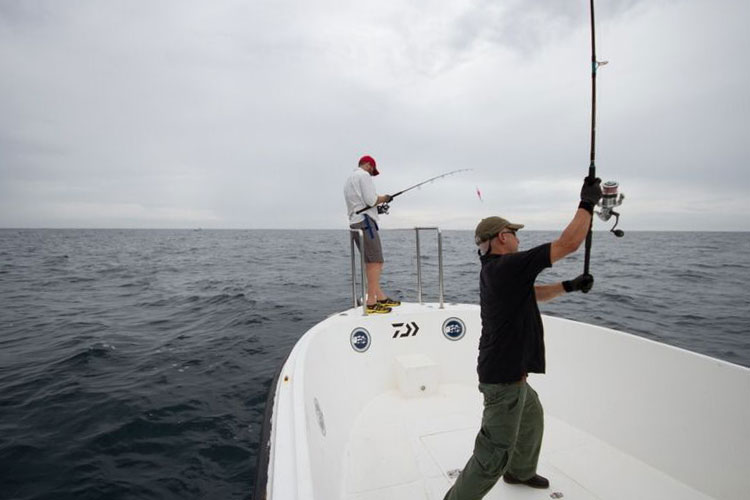 They soon got the hang of it though

The spray were getting bigger & better

Ian was first on the board with a grouper taken in the shallows around the lighthouse and later on managed a small GT. From there on out things steadily improved as the guys got to grips with the tackle and working the lures. As the casts got longer and the pops bigger more fish started coming to the boat.

We hit the jigging spots as well to get the full experience & after a slow start Bas managed a great GT, which gave him a nice work out and Ian landed the biggest Spanish Mackerel of the trip. I lost count of the amount of Jigs the razor blade gang made off with but on the bright side the guys didn’t have to cart too much weight home! The ever-present Coral Trout were also in abundance and Mikko landed too many different types on the ultra-light jigging gear to keep track of. 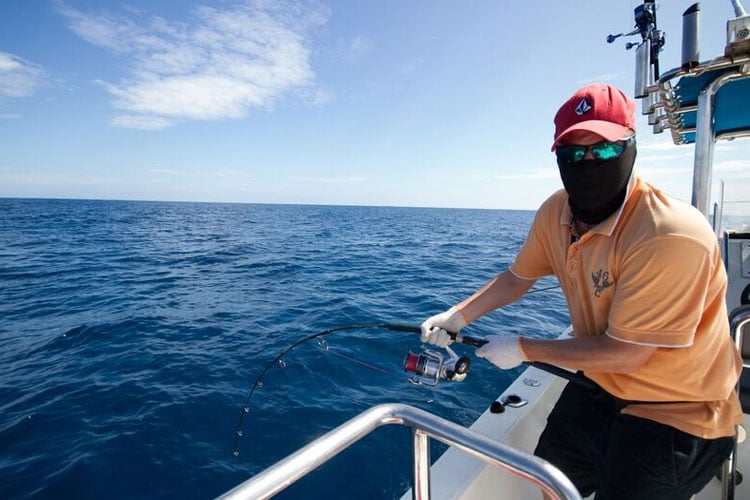 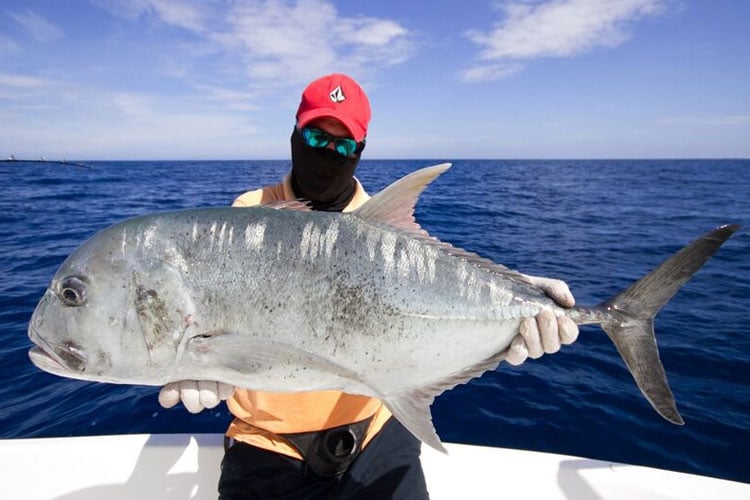 What an awesome fish the GT is 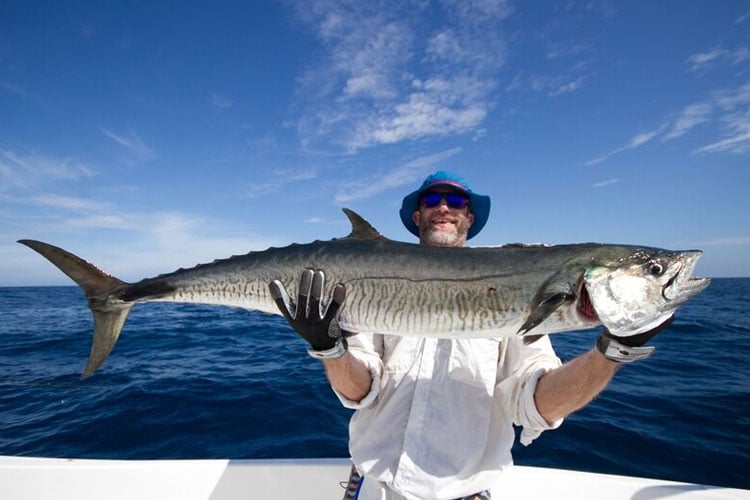 Now that is a Spanish Mackerel 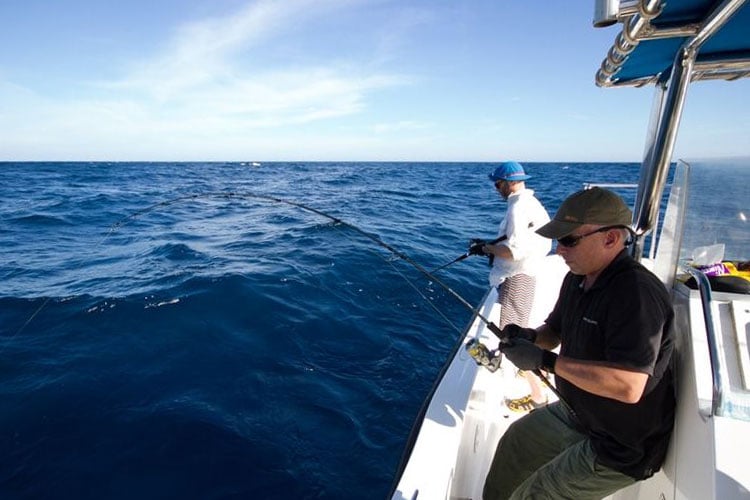 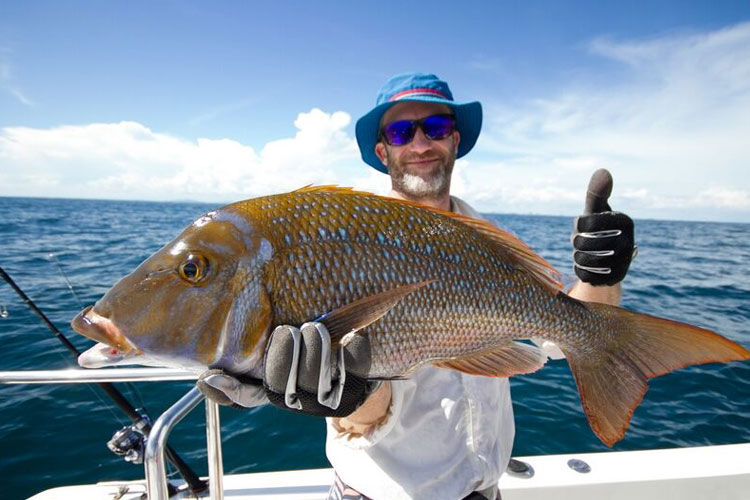 All sorts of reef fish to be caught

With the dirty water hanging around Great Basses we also did a run to little Basses to jig the ledges and work the reef around the light house. The jigging was on the quite side & the Macs claimed their share of jigs again with only Ian gaining revenge and bring one boat side. We tried a few of the reefs and finally struck a productive area with every one getting on the board with GT’s including Mikko who had worked very hard to secure his top water GT. 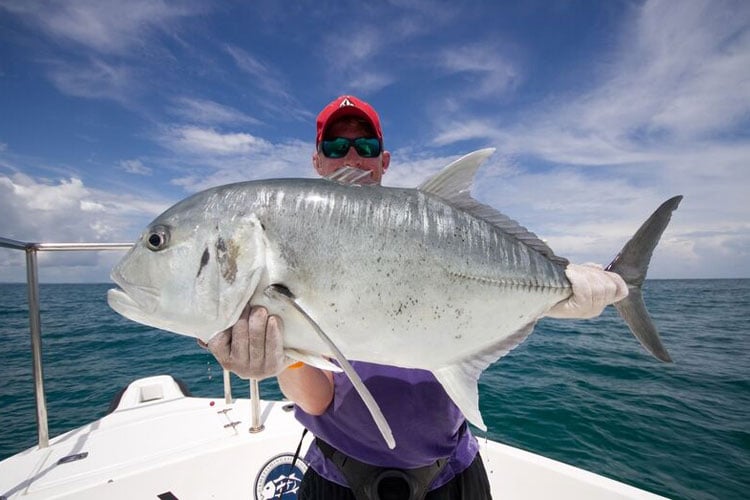 These GT’s are super fun

The fish of the trip definitely went to Ian and funnily enough it happened at the calmest time of the day, the sea was like a millpond and the current was almost non-existent. I took us out to one of the deeper ledges and as we slowly drifted along, popping away with little success, I told Ian to put on a flashy stick bait and work it slowly in the deep water, five casts in and the lure was blown away in a monster hit, after some screaming and shouting about setting the hooks from the captain Ian settled into a brutal tug of war with a great Sri Lankan GT. He was fishing a light rig with a Carpenter EP 86/30 with a Daiwa 5500 loaded with PE 6 but he poured on as much pressure as he dared and we managed to land the beastie, Ian was pretty wiped after the brawl but we kept the GT in good shape with the water pump and he swam away strongly after being released. 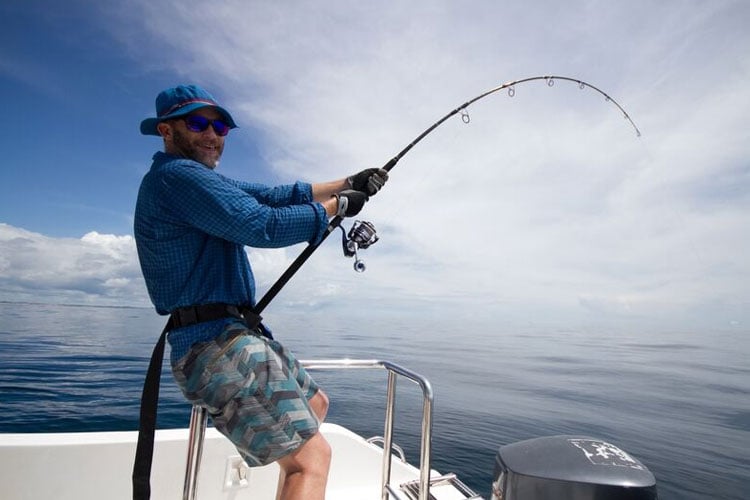 I think he has something a little larger 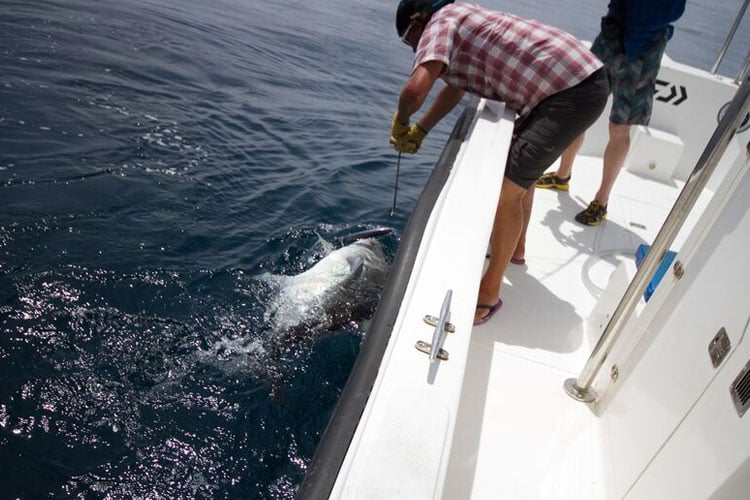 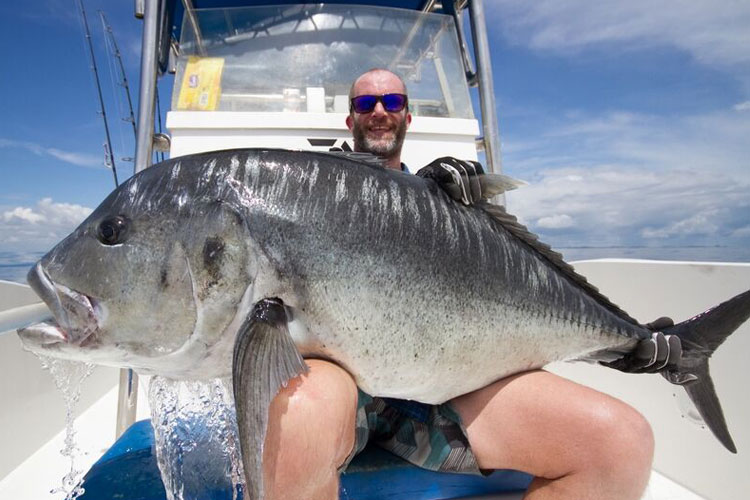 Wow, thats what they came for

By the end of the trip the spirit was willing but the bodies not as much. Ian contented himself micro jigging and landed 10 different species in short order and Bas landed a great Spanish mackerel that launched itself into the air with his lure firmly in hits jaws. Not to be left out Ian had a few last casts and also landed a big mac on topwater.

Over all the guys did very well, making the most of the challenging conditions and fishing hard without pause or complaint and the results speak for themselves. Well done guys and we hope to see you all again soon!
Awesome report guys and thanks for looking after the anglers so well, I am assuming we will be seeing them again next year?

As promised I have below given you the only dates we currently have left for single anglers fishing in Sri Lanka and if you would like to put your name down then simply call us or email sales@sportquestholidays.com