Fishing Report Andaman Islands has come a long way from when it started back in 2007. Over the years we’ve catered to a vast number of anglers from across the world. We primarily cater to larger groups of seasoned popper and jig fishermen but we’ve been receiving more and more enquiries from single and novice anglers who’d like to be part of a group of fishermen or would like us to form a group of them so they could share the costs with other like minded anglers and get a shot at fishing in one of the best locations in the world. 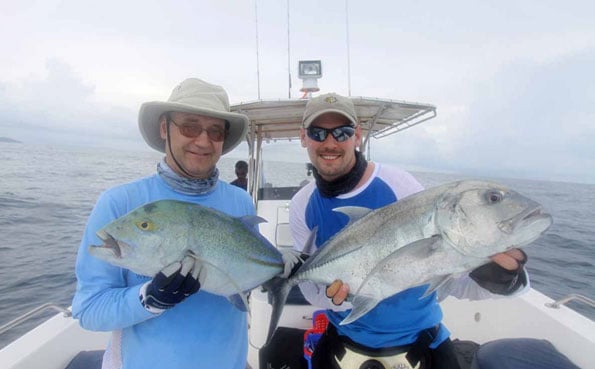 Paying heed to a larger and larger number of these requests we decided to start promoting ‘single angler’ trips where we put together single anglers. We just ran our first single angler trip in the Andaman Islands with Chris and Willem. We take care to see that these are a good set of dates and do our best to see expectations are met keeping in mind the differing skill levels of the anglers taking part.

We’ve got a report below from our first trip, which was filled with action and of course many many fish. Fishing Report Andaman 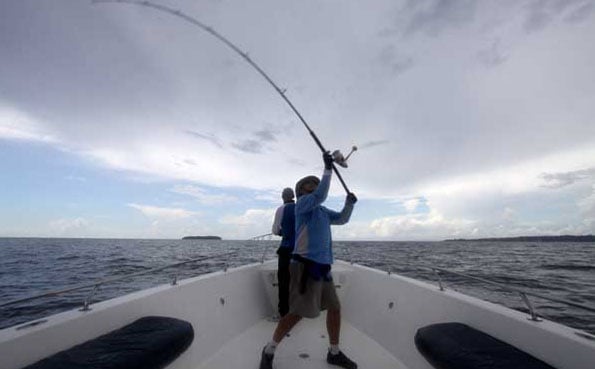 Chris casting out over a shallow reef between two Islands. These reefs located to the east of Port Blair are a shallow set of reefs teeming with life and most importantly with bait schools. This area is a sure shot location for large numbers of GT that patrol the reefs. 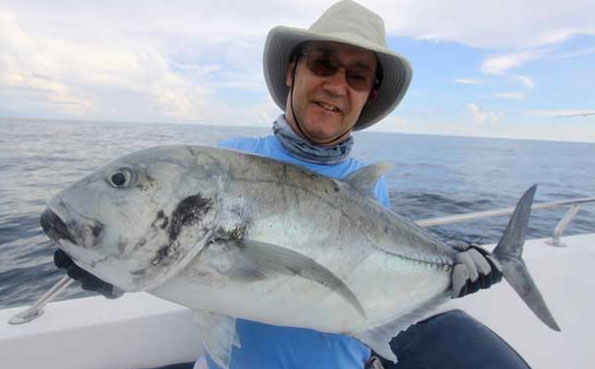 Chris hooked up first on a GT that came up and hit his popper. These areas are ideal for guys who fish in these areas for the first time as there is no shortage of action. We might not have had any monsters on the first few days of the trip but our aim was to have a lot of action and we surely did get it. 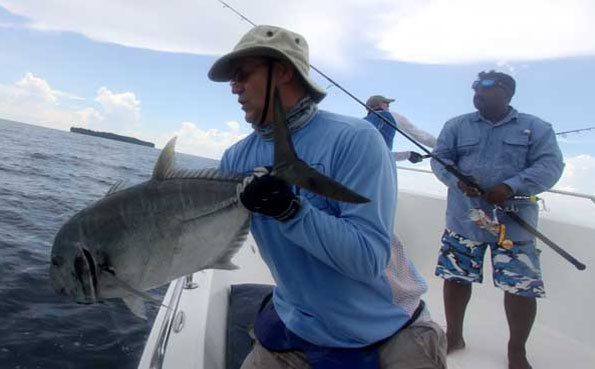 A quick photograph of Chris’ GT before it was released back to the reef it came up from. Our crew have been trained to make sure the time a GT stays out of the water is kept to the minimum. We get our photographs taken in a flash and have our fish on their way with as little stress as possible. It works best for us this way. 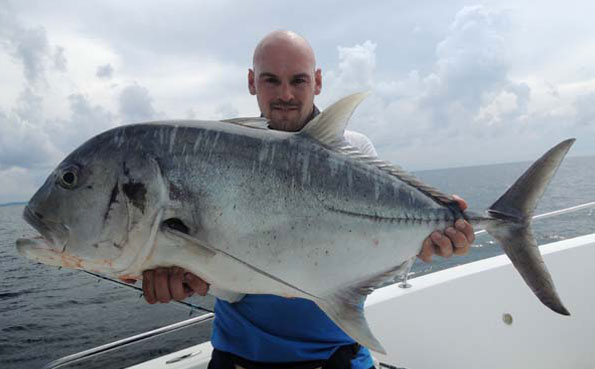 Willem with a GT, one of his first for the trip, but it’s just the beginning. Getting the popper to work the way it’s meant to in varying conditions, getting the right amount of distance while casting and figuring out where to cast were aspects of fishing our crew helped with on the first few days of the trip. 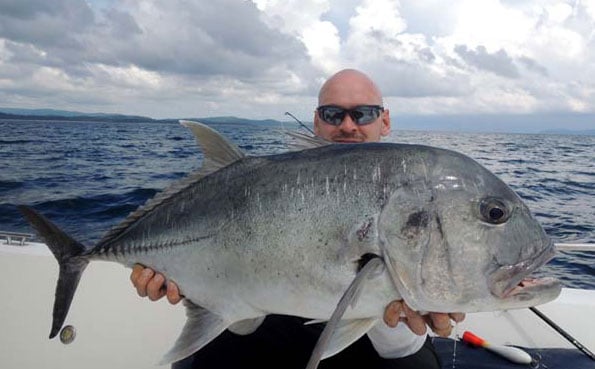 Willem with another small GT. It’s funny how classic designs sometimes do the best. In this case more fish were caught on the humble River 2 Sea Dumbell Pop 200 with a red head and white body. There are a wide selection of poppers and stick-baits available currently and recommend anglers starting with easier to use, cheaper and off the shelf poppers. Once anglers have a couple of trips under their belts using more expensive and more technically challenging lure is a natural progression. 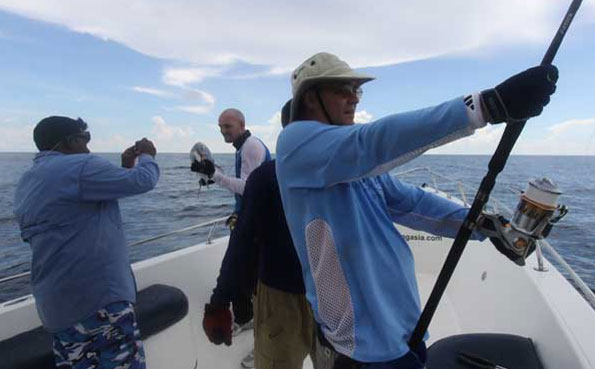 We had constant action at a couple of the locations were were fishing. Constant multiple hook ups had the crew scurrying around the boat gingerly keeping out of the way of flying poppers and bent over rods to release fish as soon as possible so poppers could be cast out again. We finally stopped taking pictures as it go it in the way and just left the GoPros filming the action. 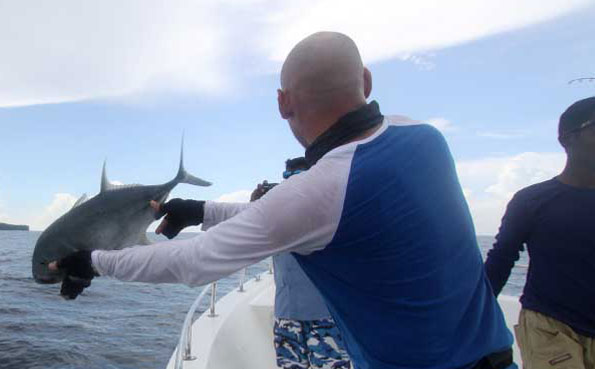 Willem releasing another rat GT over the side. With GT it’s best to ‘spear’ them into the water and give them that kick start. 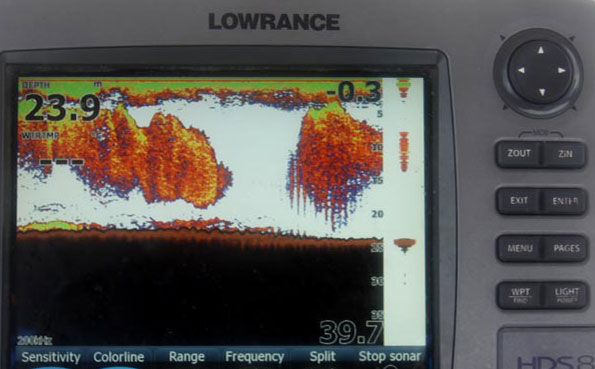 The reason we have such a ball while we’re out fishing these select reefs is the amount of bait they hold. Large blobs of red and yellow have never looked better! This photograph of the fish finder is of a huge school of yellow and blue fusilier.

Chris with a small tiger grouper and Willem with a blue fin trevally. These fish are good sport on lighter tackle. We do catch these species regularly on top water lures. Blue fin trevally seem to prefer smaller pencil like poppers fished at a faster retrieve. 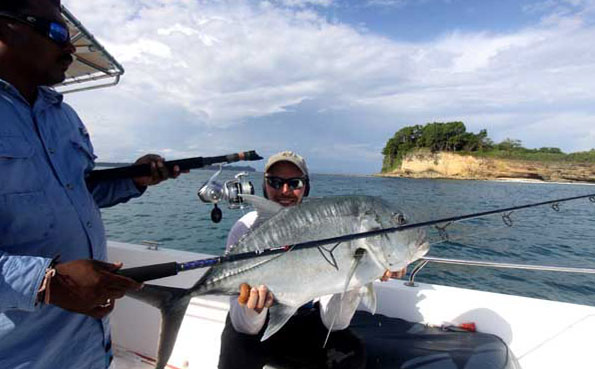 Disaster! We see this happening often. Anglers coming out for the first time often just can not judge the amount of strength a GT has and come under equipped or with rods are not meant for the job at hand. This rod snapped at he handle on the strike as Willem set the hooks on what was not a very big GT. It’s just a part of the learning curve when it comes to GT fishing.

Chris was fishing off a deep reef way south of Port Blair this particular day. We were out drifting over reefs in water over 50 meters where we usually have some XL GT coming up to take poppers. This time Chris cast at a bait school and had this mackerel shoot out of the water with his lure in its mouth. Luckily the hooks stayed where they were supposed to and after getting pulled around the boat for a couple of minutes we had this fish safely in the landing net and on board. Thankfully all pictures and measurements of the fish were taken with no one losing a finger or a toe! 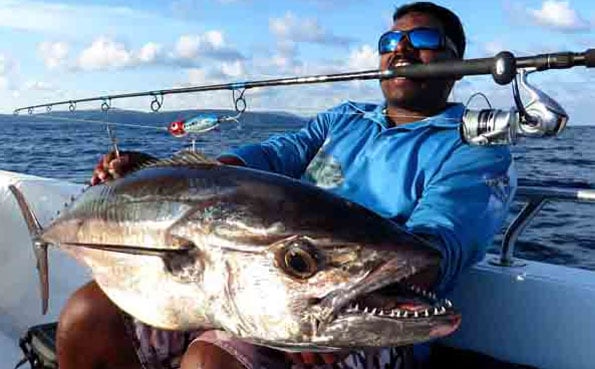 We’d told the anglers about the very real chance they had of hooking a dog tooth tuna on popper during this trip. The conditions were overcast and water temperatures quite low which often are the conditions under which we catch doggies on jig. It was towards the end of the day and our skipper Bunty had the last cast once everyone was done for the day and his lure got taken in a massive swirl. What followed happened very fast. The reel screeched as line poured off it, thankfully he managed to put the brakes on before the fish reached the reef. In minutes he had the fish’s head turned as it reluctantly circled its way up to the boat. We had a few photographs of this fish taken with a very happy skipper and released it. 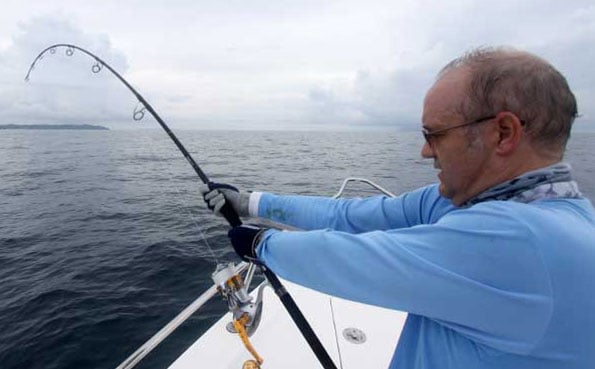 Chris putting the pressure on a better sized GT that took his popper the following day. It wasn’t too long before he had his GT by the boat. 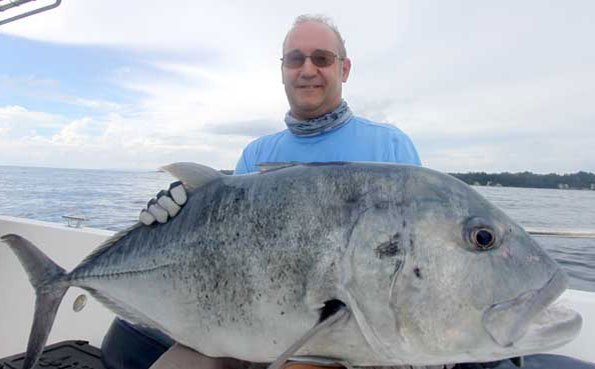 Finally we manage to squeeze a smile out of Chris with this GT. His hard work paid off with this perfect specimen. 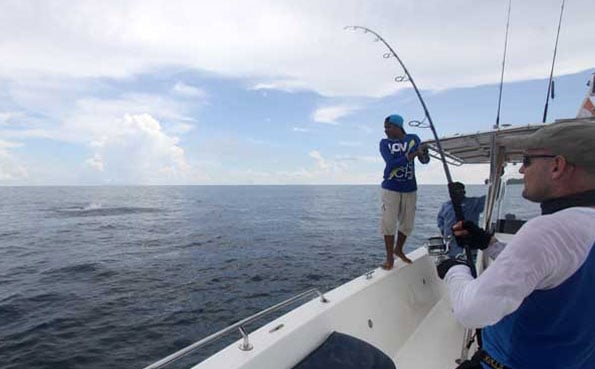 While Chis was busy admiring his fish Willem hooked up with another GT. Days like these are hard ones and the crew are on the feet right from the start till the end of the day. 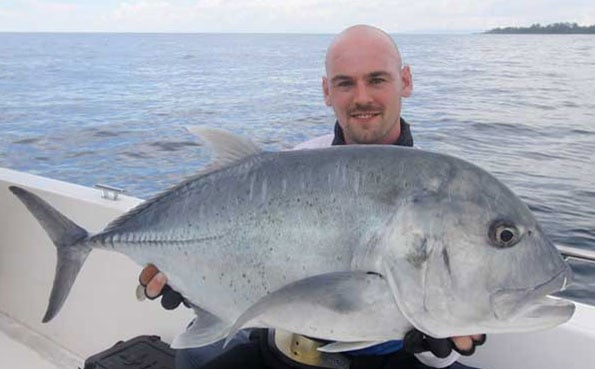 Willem with his GT minutes after the last fish was landed. Chris was back up and casting from the bow of the boat after his last fish. 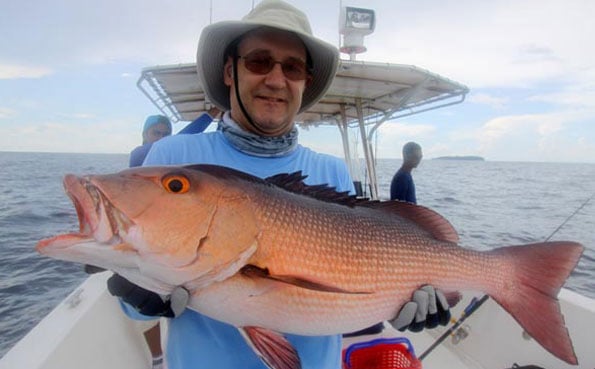 A nice looking red bass came out of a bait school. This fish did add some colour to a grey afternoon. The light was terrible to take photographs in but the conditions were ideal. 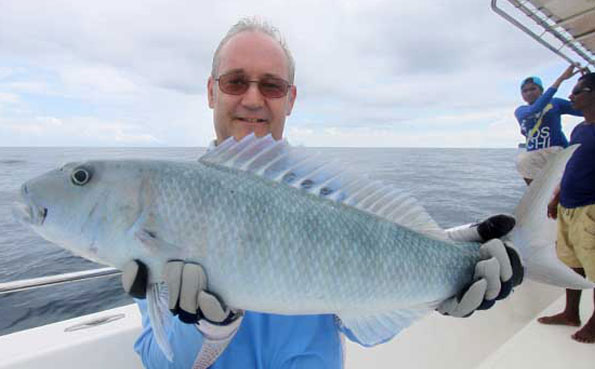 Adding a bit of variety to the usual haul of GT. If we remember right that was Chris’ first green job fish as well. 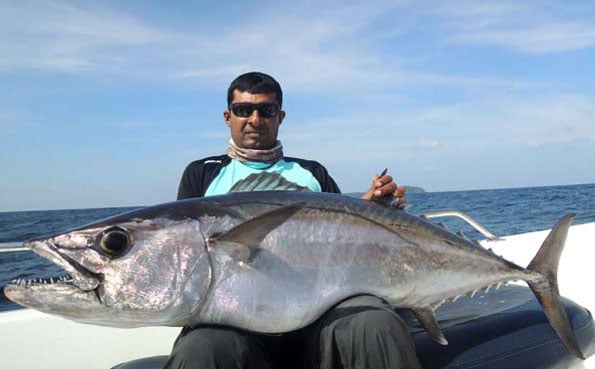 Akshay landed this evil looking dog tooth tuna on jig. Some areas are suitable to pop and jig. We use much lighter jigs while jigging in about 30 meters of water. This fish came up and engulfed a small 80 gram jig.

More action above as Willem was on a roll landing GT after GT. These fish weren’t large on that particular day but there were schools and schools of them. We guess the smaller fish are a whole lot quicker than the larger ones and get to the poppers faster when there are so many fish around. 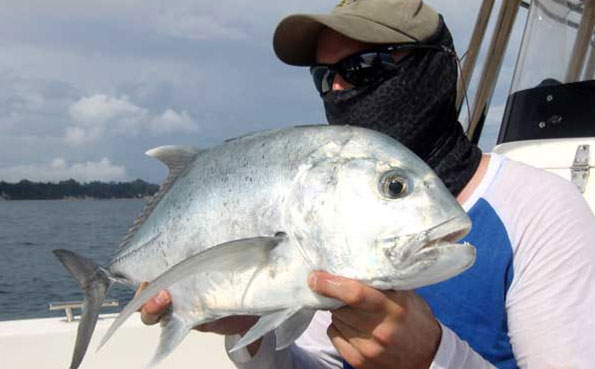 The smallest GT this year

This small GT holds the record for being the smallest GT caught this season. It’s remarkable how aggressive these fish are. 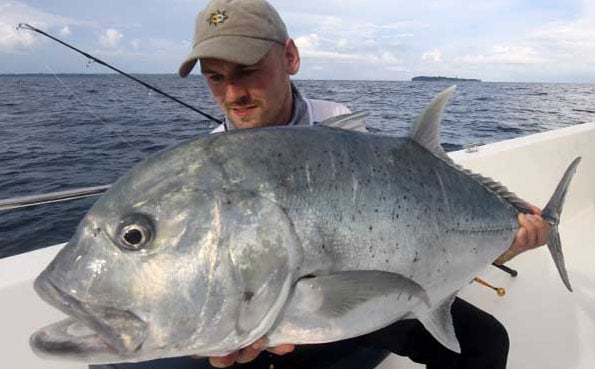 More GT caught and released by Willem on what was turning out to be a very good trip for him. We’ve successfully turned another fisherman into a GT crazy angler who we know we’re going to see again. 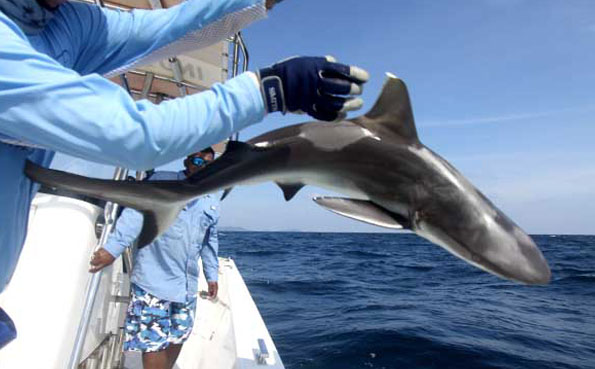 We don’t really see many sharks because we try and avoid them as far as possible. Every now and again we get a shark that’s more interested in us that we are in it. Reef sharks don’t hesitate coming up and taking a bite out of a popper or stick-bait. If one doesn’t get bitten off, lures usually have very impressive teeth marks on them.

More GT from a very fishy spot south of Port Blair. We were fishing here looking mainly for dog tooth tuna as they hang in the current ripping around this island lying in ambush waiting for unsuspecting prey to swim around the corner. 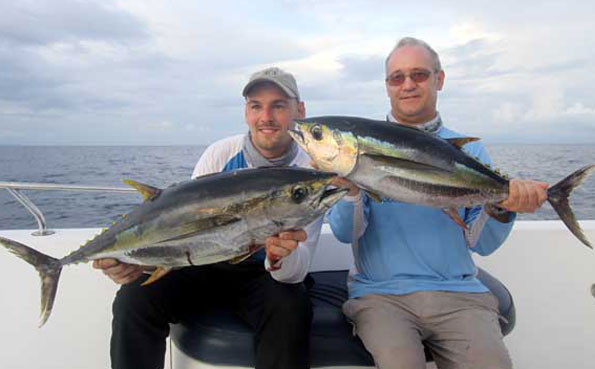 Most unusual for this time of the year for us, but we ran into a pod of dolphins that seemed to be working an area. We cast our poppers well ahead of the pod and had instant strikes. We hung around with the dolphin as we caught a tuna every cast. We had to finally call it a day as we were starting to lose light and had to be back in port before it was dark.

The above report was put together to show you how when you speak with the right people things go well. So if you are a single angler and would like to put your name down for such trips then feel free to leave your name and number in the comment box below or alternatively call us on 01603 407596 and we can put something together for you

One might have a few doubts or hesitation about planning a trip like the ones we propose but below are some of the reasons why it is a win win proposition for us all.

*You get to fish the destination you’ve been dreaming of. Finally it becomes a reality as you begin your preparations for that exotic trip to the tropics.

*You get to meet and interact with anglers from all over the world. One can gain a lot of knowledge based on the experience of others, about different locations around the world, techniques and lures used to target key species of fish.

*Many anglers while on a fishing trip are already planning their next adventure. One can always meet other anglers to join in a future trip while out fishing. Future trips are common topics of discussion after a day out on the boat.

*Your tackle needs are taken care of. With airlines being rather rod-tube hostile these days, we can provide single anglers all equipment for their fishing week. Typically we provide popping and jigging rods but now also have popping reels for hire. We also will have a limited selection of lures for sale that clients can buy or we could always suggest a reliable tackle shop close to you that has the equipment and knows the fishing conditions here in the Andaman Islands.

*It’s a lot cheaper. Typically the boat hire charges are split equally by all the anglers on board. Joining a group brings down costs for you and other anglers.

Hope to speak with you soon, tight lines