Sri Lankan Guides GT Fishing Report:  The fishing Guides in Sri Lanka write some fantastic reports and this one is no different. You can tell from their enthusiasm that they are also keen anglers. This below report from head Guide Nico, is yet another brilliant report and I am sure once you have read this, your angling juices will be flowing and may find yourself looking at this trip as your next adventure. I will hand you over to our head guide: 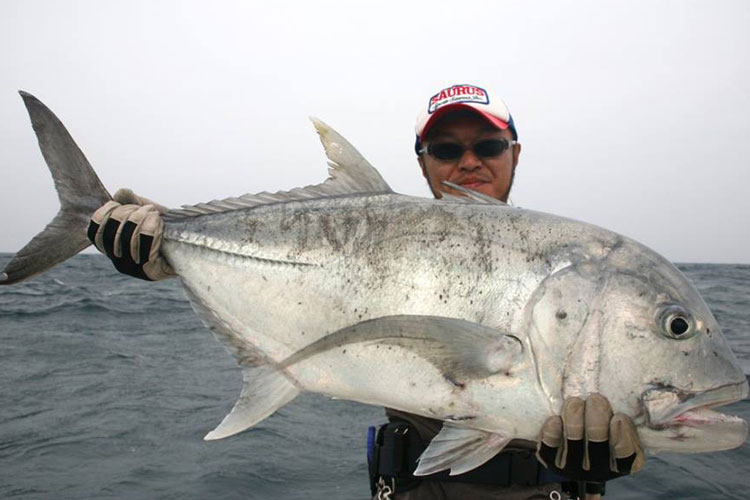 “I met up with the group in Colombo and we travelled together to Kirinda talking fishing during most of the trip. To guide Japanese anglers is always a pleasure; they fish very hard and generally very well (especially for GT) and always come with high-end rods, reels, lures and accessories not available on the western market. The leader of the group was Morizo San who runs a charter boat for GT fishing off Okinawa Japan, the four others guys where clients who had mostly started fishing for GT with him.” 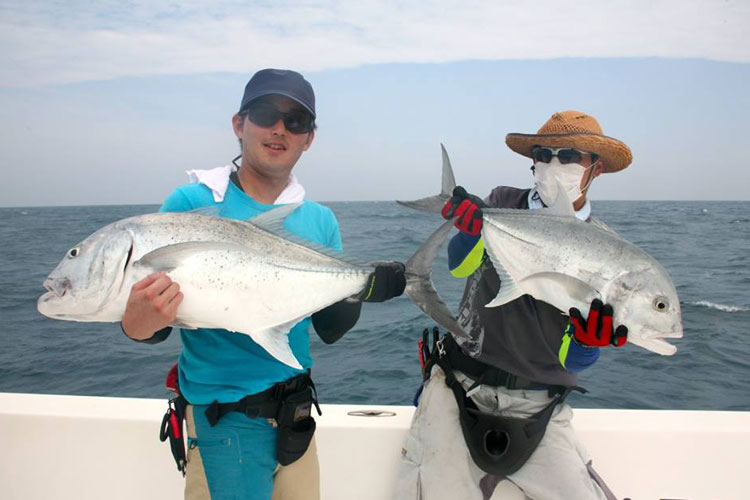 “Morning of the first day, the Japanese arrived with 15 popping rods and dozens of pouches Packed with lures. Each guy had 3 dedicated rods, one to fish popper, one for stickbait and the last one with a Carpenter Pandora or Zeus. Tackle porn! Not common to see this kind of arsenal onboard of No Limit !!! All the lures where rigged with the new Japanese system of twin short assist hooks, which according to the group increase the hook up compare to the classic treble hook. I have seen these kinds of hook with a previous groups earlier in the season and my conclusion after their trips was 50/50, I believe in this system has merit but with bigger hooks especially with big fish. Anyway I let the Japanese fished how they want and I would do my own opinion at the end of the trip.” 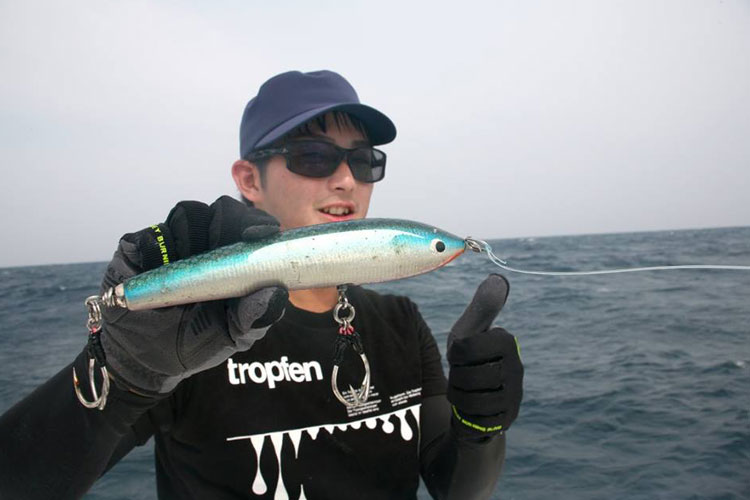 “We start on one of our deep water spot, water was very clear and we found some schools of bait and on the first drift Ryosuke caught the first GT of the trip with a Pandora. At the same spot they caught some GT’s, missed a big Spanish Mackerel and a sailfish followed Tomohiro san stickbait right up to the boat. Just before lunch we changed areas and like the previous spot we found lot of bait schools, the guys caught and missed dozens of fish but nothing big. A slow start for the trip, but I have a good feeling for the next 3 days.” 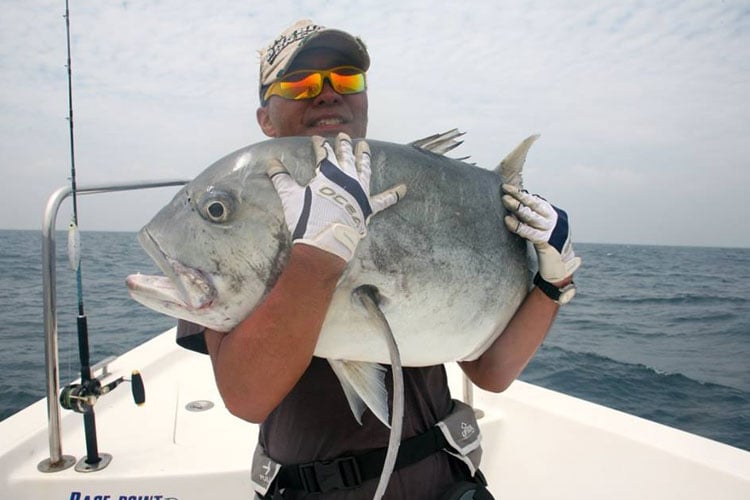 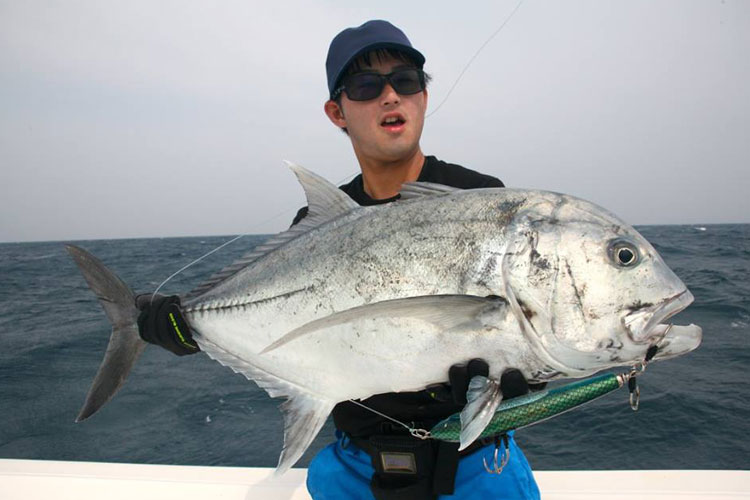 “Second day, sea was choppy but like usual in Kirinda that rings the bell for the big one. Morning was slow, the guys manage some small fish with their Carpenter Zeus and Pandora in deep water. In the afternoon we found plenty of bait school with one that was clearly being harassed by Gt’s, the bait was swimming packed tight on the surface. Immediately the Japanese changed their lures and most chose floating stickbaits like Carpenter Gamma.” 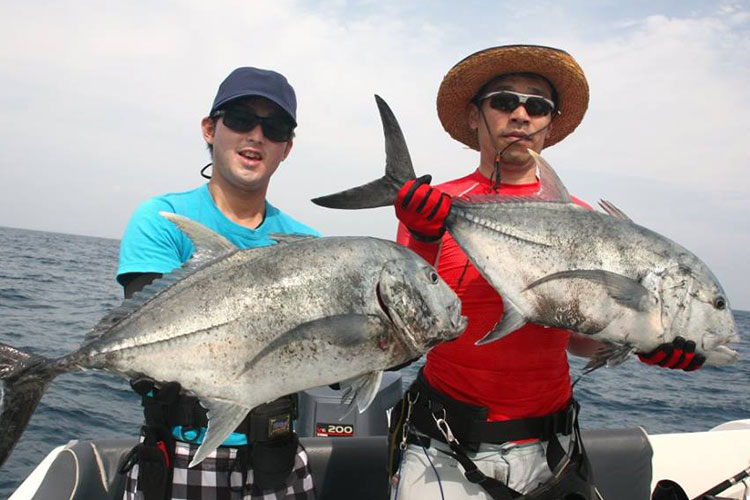 “Ryosuke was the first to cast right on the border of the bait. First twitch and he caught a fish, same story for Nagashima and the other guys. It was a very good action, every drift the guys caught or miss a fish, not big GT’s but great action . Achala the decky was kept very busy with the landing net. From past experience I knew a big one will come soon, I advised Kazu to change his stickbait for a Hammer Head E-cup popper and on the next drift he caught a decent GT. Tomohiro change his Gamma for a bigger stickbait. Next drift, I saw a small school of bait separated from the main school, I pointed it out to and ask Tomohiro to cast.” 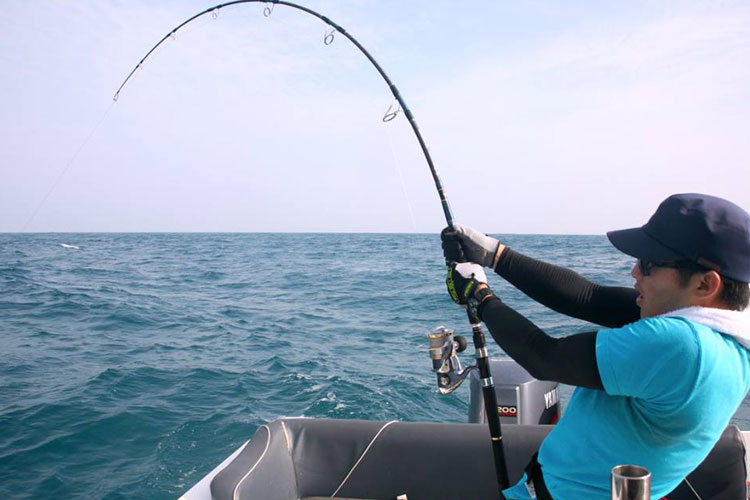 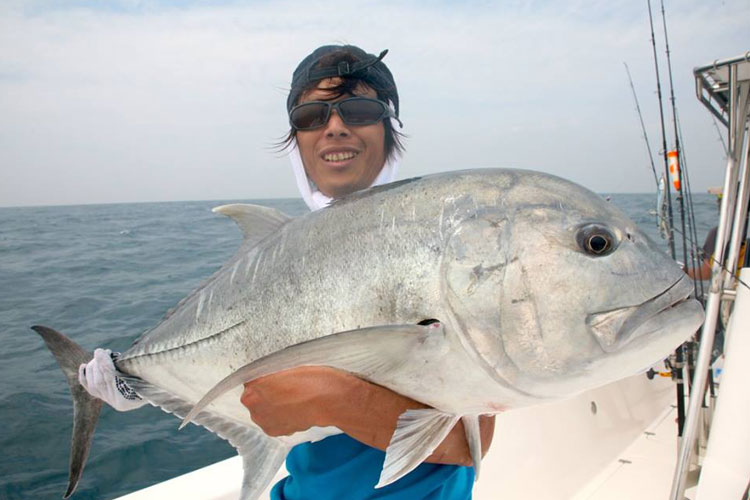 “Two twitch and a big Gt come and smash the lure. Tomohiro strike well twice, the reel screaming like hell. I started the engines and moved the boat right on the fish to put Tomohiro on top because here it’s shallow, only 6 m. I give the instruction to Tomohiro about the depth, he put two crank on his drag, his rod was full bend and few second later no more tension…. the lure come back with two hooks broken!!! As usual in these circumstances, the Japanese took pictures analyse the hook and try to found a reason why the hook broke. I stop this technical fishing meeting; when I told the guys Gt are there and active, don’t miss that chance. Till the end of the day nonstop action on small Gt’s, but no big ones came to the party. Toward the end of the day Ryosuke caught a nice Spanish Mackerel which provided us with sashimi for dinner that night.” 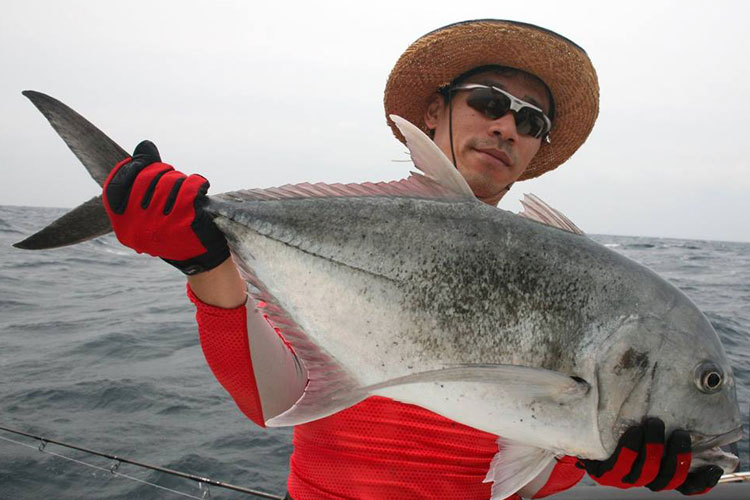 “The following day, weather was nice, with a slight chop. I decide to change area and check for activity on our shallow water spots. On arrival at the first spot, we found bait schools and on the first drift double hook up for Ryosuke and Tomohiro on stickbait. Gt’s looked hungry this morning!!! Luckily that was the case each drift at we had up to 3 hits. Ryosuke has a very big swirl behind his Gamma, finally the fish took a shot at the lure but he missed it. At that time Tomohiro had a crazy bite with a nice GT who went airborne with the lure. Tomohiro struck hard and put big pressure on the fish due to the shallow depth (only 3 m) and finally landed a nice 20/25 kg dark GT. On the next drifts Ryosuke had his revenge with a fish in the same range on his Gamma and Morizo also got in on the action with another nice fish on pencil popper. Slowly the crazy activity stop and we decide to do some jigging just before lunch. On the first drop Morizo landed an amberjack, at the same time Kazu went tight with a nice Gt on his Pe 3 jigging rod. After lunch, the wind started to blow, it’s time to go popping again on the reef. Like the morning fish was very active, the guys caught and miss some small GT’s. But like the day before I had a feeling a big fish was lurking nearby so I told to the guys to be ready. Kazu was the first one to have the big fish hit his Hammer Head E-cup, the fish took lot of line and didn’t give me time to move the boat to assist Kazu and finally the line broke on reef. GT: 1 / Fisherman: 0. The next fisherman to connect to a big fish was Nagashima on his Gamma 140. A huge GT back has split the water surface, rushing on the lure and finally smash it in a big swirl. Nagashima struck well and put a lot of pressure on the fish but again the line touched the reef and sadly he lost the fish. GT: 2 / Fisherman: 0. We finish the day with a total of 27 fish landed for 50 bites, what a day!” 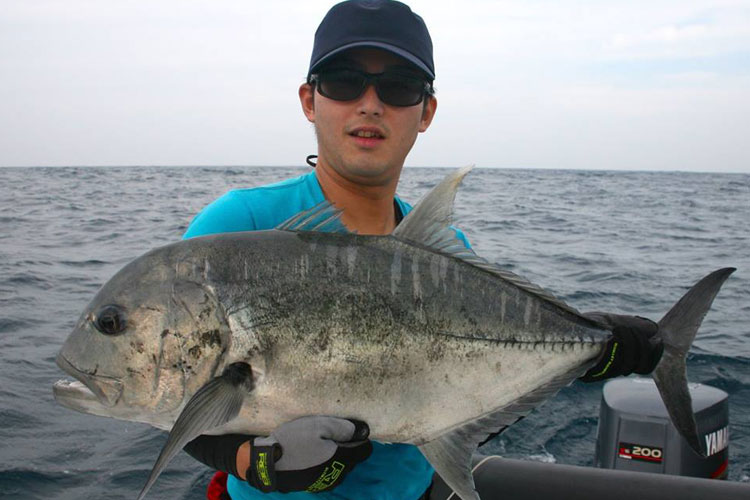 “The last day, the Japanese were very keen to go fishing, but the fish weren’t hungry compare to the days before. But they manage some Gt’s, Morizo had a big fish on his pencil popper but the fish missed the lure, unlucky. The last fish was caught by Kazu, a nice Bluefin trevally to finish the trip.” 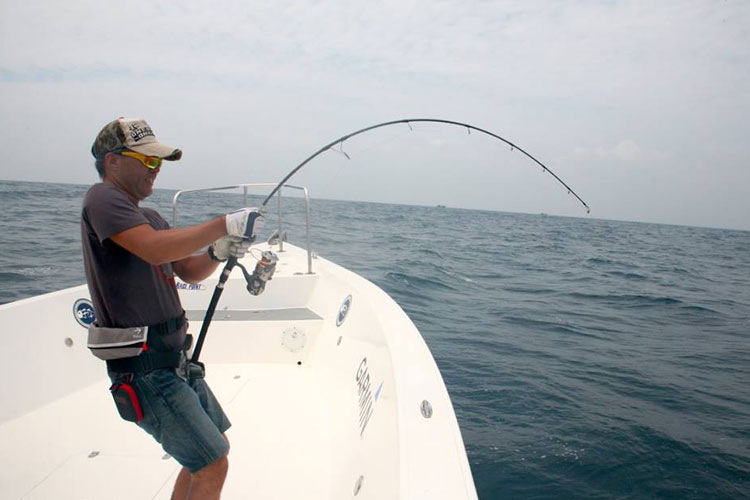 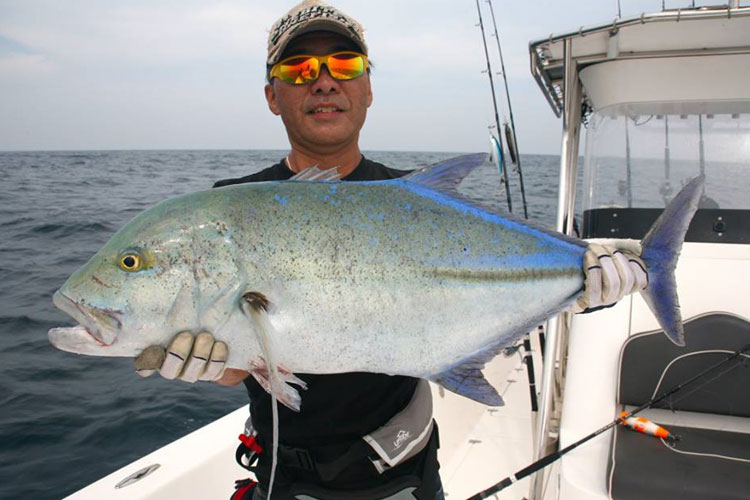 “That was a great trip with some good action, the big Gt are back on the reef and look hungry. Like I say in the beginning guiding Japanese fisherman is really a pleasure and really I hope to see these guys again for new adventures soon.”

“I will finish this report with my final opinion about using the twin hook on lure, for me it’s not a miracle solution to increase hook up ratios, but this system does give a lure better action especially for stick baits and does far less damage your lure with hook rash. Morizo gave me some Studio Ocean Mark Twin Hook to try and I’ll report back on my findings” 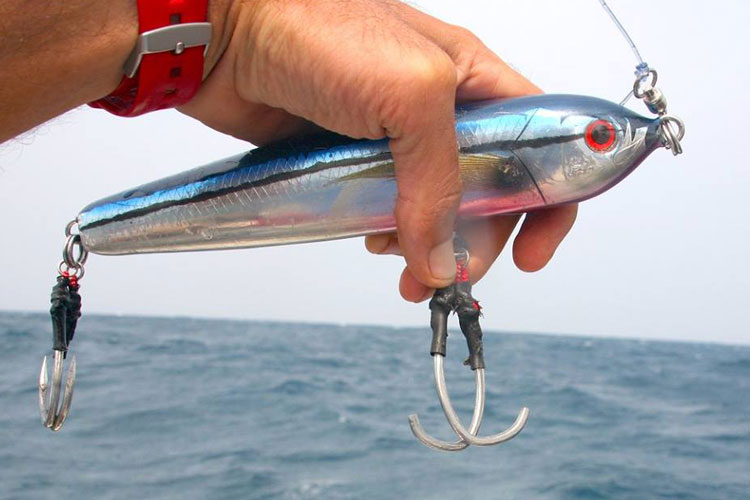 Thanks Nico for this very detailed in-depth report on one of the best GT fisheries in the World. If you would like to read the full tour details in Sri Lanka simply Click Here