Las Buitreras Report and each day we will be giving you a week by week account of just how the fishing went this season at Las Buitreras. We still have a few rods open for the 2013 season, if you like what you read then contact us to reserve your place. We can provide the complete package, flights, hotels in BA, transfers and of course the fishing. Alternatively if you want to make your own arrangements we can just reserve the fishing for you.

With the streets of Gallegos deserted, the doors locked, and the windows being barricaded, one can be quite sure that week seven was coming to a close. With apocalyptic forebodings contrasting sharply with the gruesome reality that awaited them last time, several Scottish anglers came seeking revenge. Armed with several nine to fourteen ft. doomsday devices, they aimed to teach our chromers the very meaning of being hooked on fly fishing since droughts and floods ended up becoming an inconvenient circumstance of their last trip in 2011.That trip started very dry before they witnessed a tsunami like flood at the end of the week, which made it utterly impossible to fish for the last days. And here they were again, continuing where they left off last time after the chrome flood…

While the majority of the group consisting of John, Robert, James, Hamie, Innes, Jose (Pepe), Nick, and Paul decided to spend a couple of days at Jurassic Lake, it was Paul (aka. Pablo), who snatched the chance to fish 52 pools in our beats all alone. Well, he was accompanied by one of our guides. As soon as he was backed up by the rest of his scotch-blooded countrymen plus one good friend from Spain, they performed as a unit, landing 26 seatrout just on Monday… A worthy addition to the team has been Nick Taylor who provided both the top rod with 19 fish and the biggest fish of the week, a cracking 22lb hen out of Tiura that he tied up together with our guide Diego Peralta. The group had a ball and ended the week with a very cracking 75 fish.

Fishing conditions on week 7 was as follows: The previoust week’s flood reached it’s peak on Thursday night, keeping the water levels high until Saturday before they gradually started to descend to a slightly colored but fishable level of +35cm. Since the river bed was being swept clean of algea, weeds, and plants, heavier stream tips and slow sinking lines were quite successful during the week. Especially when the water level was higher, the fish tended to hide in very specific places, which are often limited in terms of space. A high water hide out so to speak. Stream tip lines have proven to be very effective for narrow channels, deeper structure, limited lays, and cut banks. In an ideal world, the fly rolls down to the bottom of the pool, unrecognized by the bunch of seatrout sitting right in the spot – as soon as one mends the line downstream, the floating belly speeds up and lifts the fly on a ridiculous and deadly ascent that triggers a brutal reactionary strike!

Yet again, it was the entire range of seatrout flies that were productive. As the water level was high, bead head weighted Woolly Buggers in yellow and black were quite effective. Size decreased simultaneously with the gradually dropping water levels. This week’s top fly was a black Woolly Bugger in size 8. FLOOD Nothing lasts forever, especially in a fishery that depends entirely on the alignment of several factors that include: tidal levels, moon phases, water levels, and water temperatures. The last two are by far the highest variables. Although they are hard to predict, floods are the most welcomed change of pace. Once they arrive in our watershed, the descent and run of the fish becomes quite predictable. The first two days after the water clears up are great – most likely all the fish that remained untouched during the peak of the flood, will be taken within one session (no kidding). Then it slows down because the conditions are just perfect for the fish to rush through the pools in the direction of their spawning grounds. As soon as the water line has settled down to normal (about + – 0cm), seatrout will rest longer in the typical holding spots. The pools are filling up again with the numbers getting closer to normal. 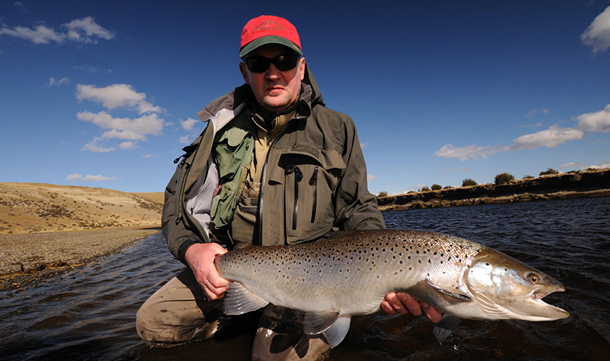 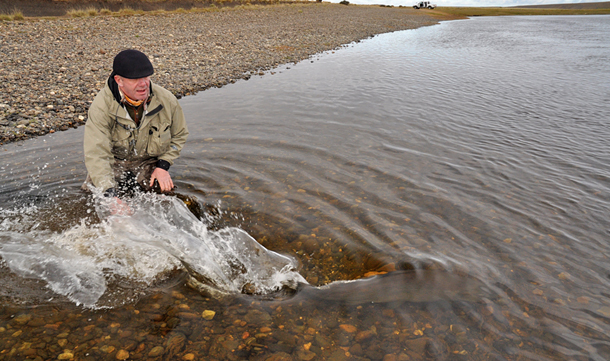 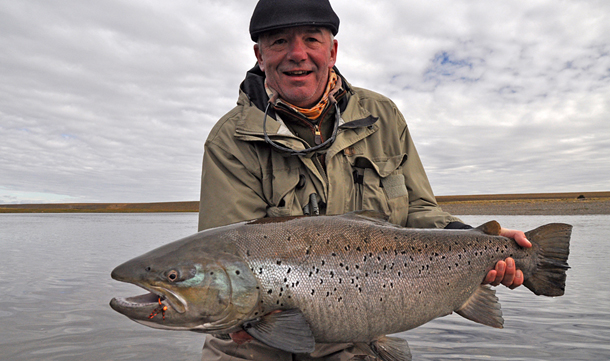