Along with our partners ‘Tropical Sea Angling’ we have been receiving some amazing reports from this new destination. Rodrigues Island is proving to be one of the best places for jigging for the mighty Dogtooth. The waters seem to be teaming with them and it will not be long before we see that magic Doggie get landed exceeding the 100kilo mark. One of Tropical Sea Anglings guide Erik Axner returned from this magical island alive with enthusiasm and stories of broken arms aching backs and more importantly tales of huge fish landed.

Below is his report from a weeks fishing where he guided a group of anglers to some of their most memorable fishing experiences of their lives. If you would like to join us in fishing from Rodrigues then get in touch we have some amazing weeks available where our boat and skipper will put you in front of some of the hardest fighting fish you will likely ever hook, the rest is down to you!!

We start trolling right away when we leave the harbour in the afternoon and already after half an hour we land a Wahoo. Shortly thereafter a huge Marlin takes the bait and dances behind the boat with great cheers from us. We barely have time to get the rod out of the holder and the harness strapped on when all of a sudden we become detached and the Marlin went victorious from the battle.. The trolling continues into darkness but we do not see another fish raised. We then all decide to get some sleep ready for the Hawkins bank that lay ahead. The weather is brilliant and promises fantastic weather forecasts for the next few days.

We start right after breakfast by trolling, an effective way to find fish and a good way for Captain Cyril to create an idea of the currents. Throughout the morning, we catch Wahoo and Yellowfin Tuna with double and triple strikes which becomes common place! The Tuna on average were around 30 kg, which are amazing fighters. Fast forward to lunchtime and we managed to hook up a little Bonito, perfect! It is saved in tuna tank and pretty soon the captain will find a big weight where he stops the boat and rigs up the bonito and makes it swim down around 30 meters. Smack! The line is peeling off Martin’s reel and the rod bends heavy. He puts good pressure on the rod and pretty soon lands a dogtooth around 40 kg which is a new record for him.

New Baitfish is going down and the procedure repeats itself. Martin’s friend who is also named Martin stands with brutally bend and a screaming reel! A much tougher fight starts and once the fish reaches the boat, it turns out to be even bigger, around 50 kg! A new record I quickly hooked on a new Bonito and get smashed instantly. It’s really sick fishing right now and a 30 kgs Dogtooth is soon landed, which still took a good amount of line before it stopped! These fish are really crazy fighters, especially in the first rush that beats everything else I’ve experienced!

The afternoon goes fast and we jig, landing a bunch of different species before the evening is here and the sun goes down. A couple of Dogtooth later before I drop down the last drop of the day and get a heavy bite. The fight is brutal but we suspect shark. Even at the boat, everyone thinks it’s a shark as it was getting dark and we could not see very far down. But 2 meters under the boat we see a shiny fish which can only mean Doggie… a giant Dogtooth sits at the other end of my line and when we get the fish half meter from the boat something happens and the fish bolts one last time… then the moment that still haunts me, the hooks pull and it disappears into the dark.. We estimate it to around 70-80 kg but hard to determine when the light is limited but it was really really big. There the evening ends then and we all stop for dinner. The first day offered 61 fish in total and can only be summed up as absolutely amazing! 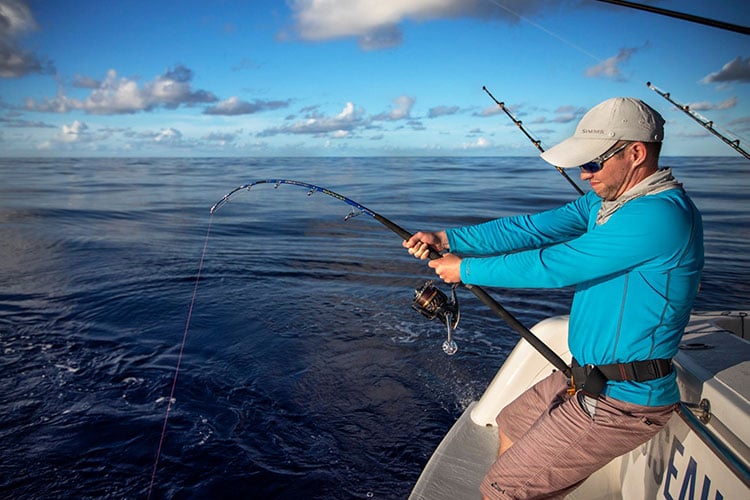 Taking the strain on a huge Doggie 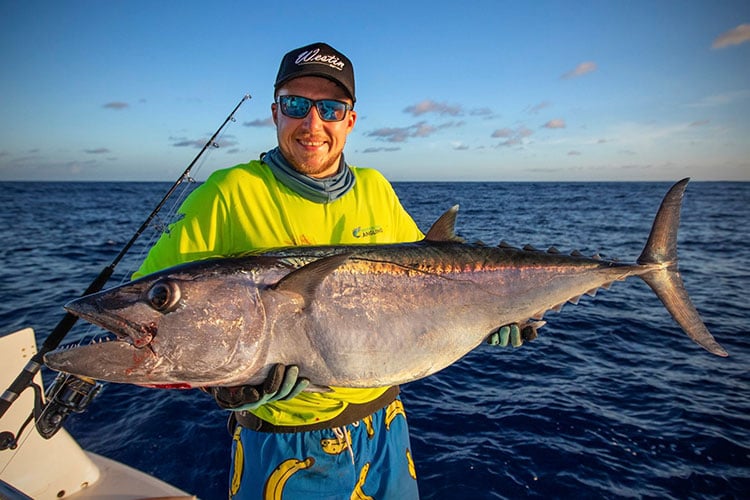 Guide Erik with a great Doggie (plus check those shorts out) 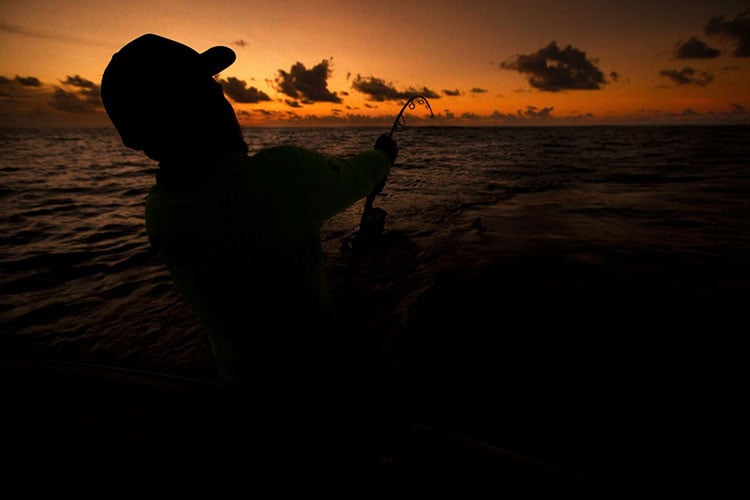 Playing a Doggie estimated to be around 70 to 80KG

The morning starts as usual with trolling, now the wind has really laid down but the waves are still there. We continue to pull wahoo and yellowfin tuna and also land a couple of dorado in between.

Just before lunchtime, we are once again trolling to recover our arms from jigging and suddenly a huge run on the outrigger and 400-500 meters line leaves the reel quick! A crazy marlin has bitten again and now the fight is on, despite a big swell. I’m sitting behind the rod, with the harness on, sweating, lactic acid in the arms while the captain backs the boat against the fish. As I fight this fish my arms are burning and starting to ache. Around 50 meters behind the boat, the fish turns and rushes away from us and jumps 5 times before it shows. Now it’s just heavy, really heavy but we win meters after meter.. suddenly we could see the fish but to our great disappointment, the line during the last jump has spun around the tail of the marlin and it comes up lifeless to the boat.. tragic but Impossible to do anything about. We bring the fish into the boat and luckily nothing will go to waste. We would love to have seen it swim home but unfortunately out of our control this time.. we measure the length and circumference of the fish and determine it to about 200 kg

During the afternoon, we tried to repeat yesterday’s success with jigging but the only thing that showed interest was the sharks that made life tough for us and hijacked our lines, biting and stealing our Jigs. This day we got 35 fish and it was clear that the activity was lower than the previous day, according to the captain because of the weather that now gave us a flat sea to look out over at sunset.. water temperature was now also closer to 30 degrees , which is really unusual! No matter we had a great day so we were more than satisfied and fell asleep happy. 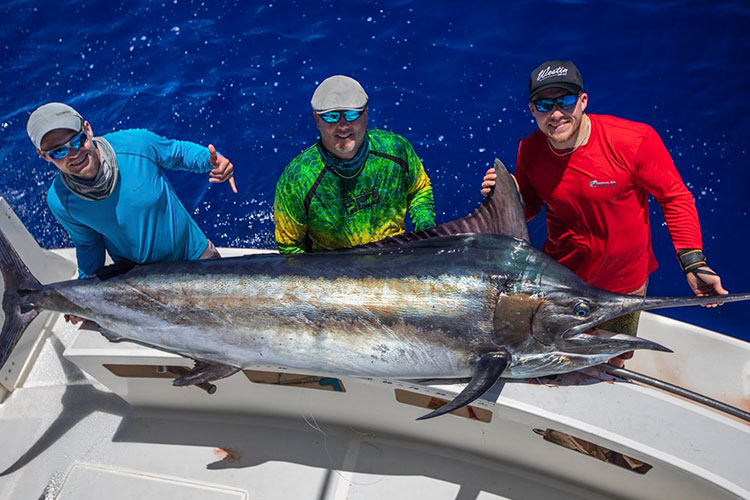 What an awesome Marlin 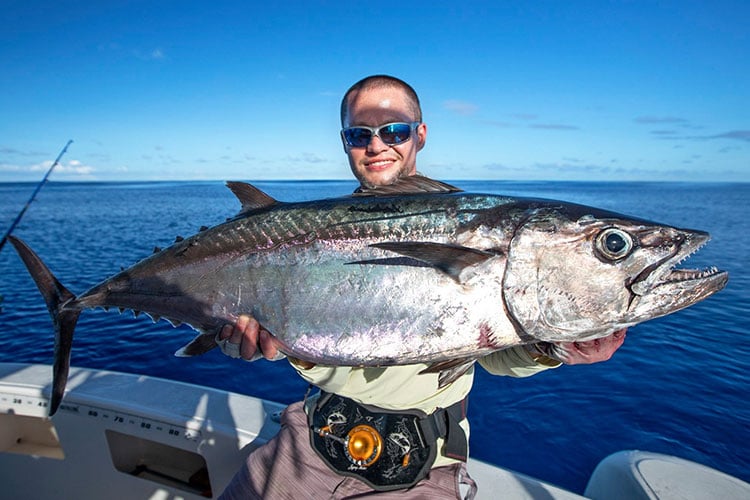 Check out the sea, it doesn’t get much better than that 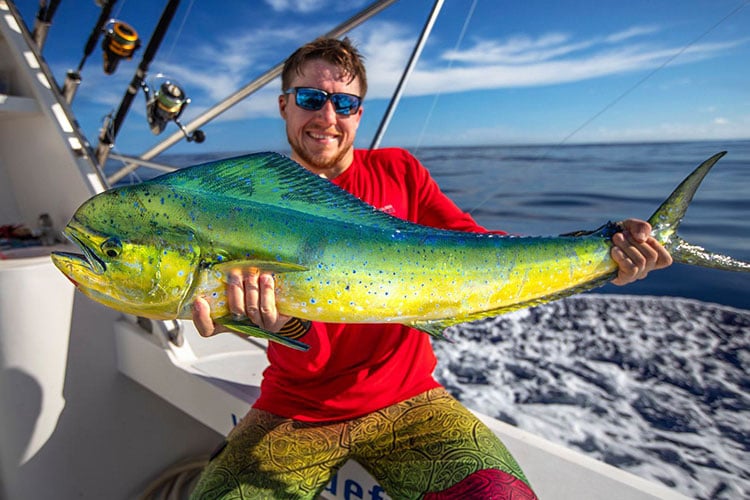 Erik with a prime Dorado

When we woke up with sleepy eyes, the sun is going up over Hawkins bank that is like a mirror.. the captain is worried about the fishing as its usually a bad sign but we get started around 7am. The water behind our boat to our amazement is filled with spears and sails! A big sailfish is now chasing our bait and pretty soon 3 Sailfish are attacking the baits and they start jumping and attacking all the lines. Chaos breaks out and the lines are criss and crossing each other, even the rods that do not have fish are getting in a mess. The Captain saw 6 Sailfish at one point following the baits but now we have a triple hook up to deal with

We fight each sailfish in the morning light and manage to land all 3. They are released quickly after and one is also fitted with a satellite tag before it is released. Unfortunately, we didn’t have time to take any pictures but everything is hopefully filmed on a go-pro that will be released later. An amazing experience and to land 3 sailfish between 25-40 kg at the same time is great angling! What a start to the last fishing day..

We troll on and catch a large wahoo as well as a couple of yellowfin tuna before we find ourselves at 50-60 meters on the bank. The Sonar shows a huge amount of fish and in the first pass we get cut off by a dogtooth tuna and soon realise that there are Doggies in mixed sizes and some that we quickly nickname “subs”, which are fish that certainly weigh 60-80 Kg.. there was a sick amount of fish circulating 10-15 meters under the boat, completely uninterested by our jigs but curious when we hooked into fish between 5-15 kg.. a couple even managed to bite our hooked fish clean in half which almost gives a little fear of what they are capable of. Shortly thereafter, a huge barracuda also shows, certainly 2 meters long that makes minced meat from a smaller dogtooth before it disappears. In the middle of everything, a huge marlin also shows under the boat, surely 300 kg if not more and suddenly the dogtooth are gone..
After lunch, which consisted of Fresh sashimi from yellowfin tuna, we decide to sacrifice some time to get baitfish.

Almost immediately, I get a dogtooth of 40 kg, followed by Martin who pulls one around 15 kg. On today’s last baitfish, Martin gets a heavy bite that really reveals a big fish. The fight goes back and forth but we win some line back and then it takes some before suddenly the fish comes off.. the sharks made it first and the fish was gone… really sour but that’s life!

We jig instead and get several smaller dogtooth that almost always be followed by one or more “subs” to the boat, once again fishing around 70-80 kg..

Suddenly a wahoo takes the jig and starts a crazy fight. A very large shape follows this Wahoo throughout the fight, the Wahoo weighed around 15 kg but what ever was following it was massive.. the captain is yelling “It’s a monster Dogtooth” and I wouldn’t be surprised if it had weighed nearly 100 kg.. It didn’t take the Wahoo and slipped back in to the darkness.

We didn’t manage to trick any of the “Subs” to bite but we leave them to all of you who want to visit Rodrigues Island and Hawkins Bank in the future! 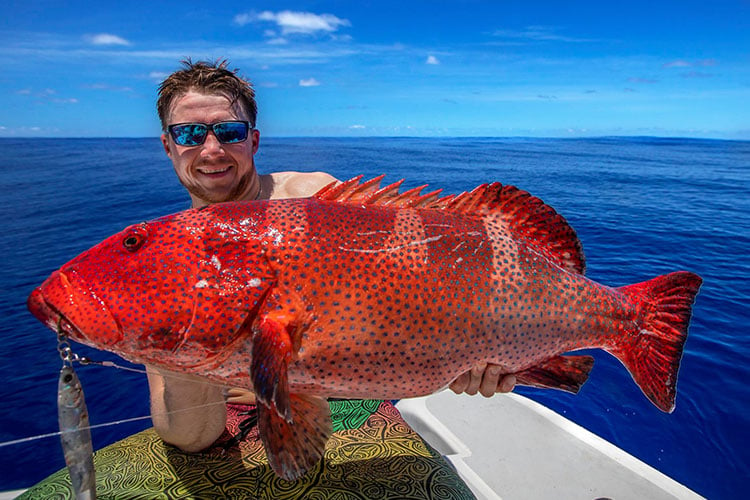 The bottom of the Hawkins Bank is littered with these 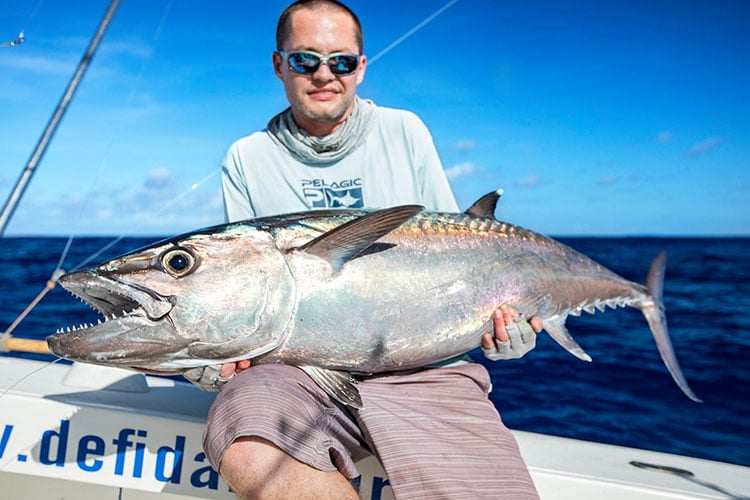 The Dogtooth are hard work 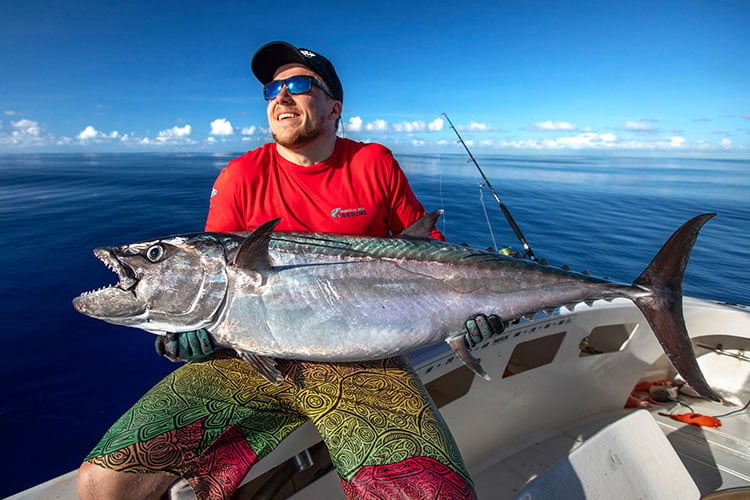 Erik taking the strain whilst posing for his picture 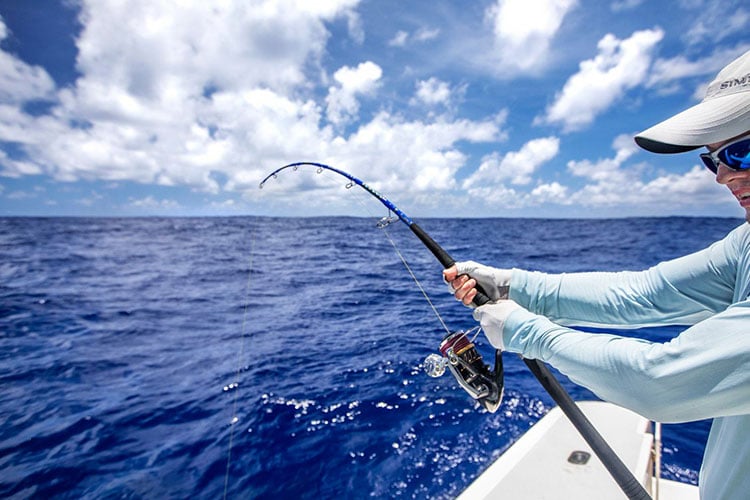 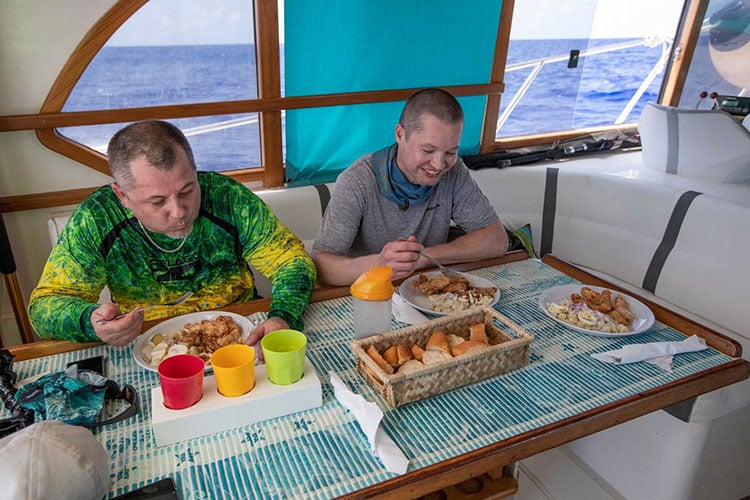 Great food onboard, fish doesn’t get fresher than this! 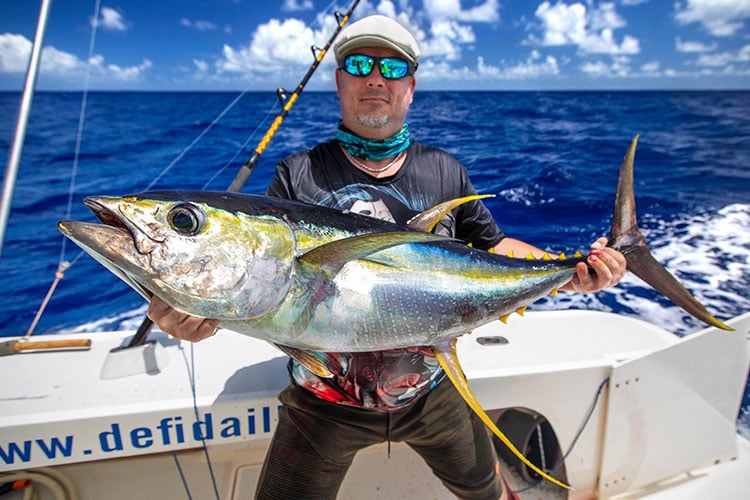 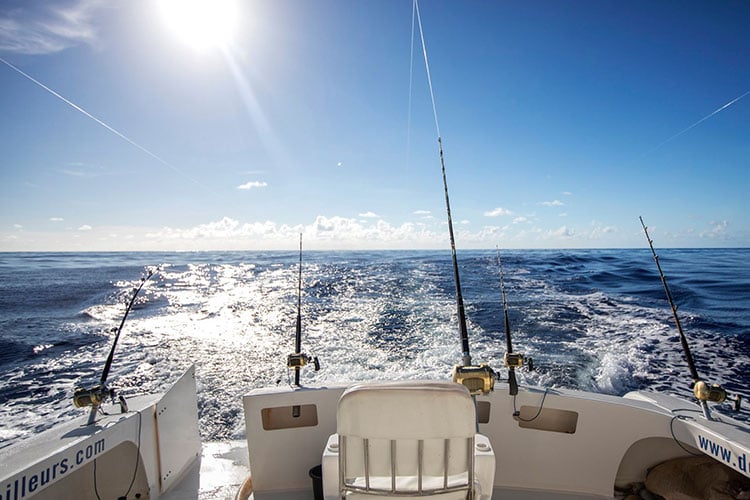