The Dorado is one of the Oceans prettiest fish and will readily hit lures and dead baits presented by anglers who are big game fishing. The Dorado will provide anglers using light tackle with endless fun as they hit hard and run fast when hooked.

The Dorado is a fish that is unmistakable in its appearance having compressed bodies and a single long-based dorsal fin extending from the head almost to the tail. Mature males (Bulls) have prominent foreheads protruding well above the body whereas females have a more rounded head. They are distinguished by their phenomenal colors, golden on the sides and bright blues and greens on the sides and back and the flank is broad and golden.

Dorado can reach sizes up to 50lb’s but the average that is normally caught is around the 20lb size.

Dorado are extremely widespread across the world’s oceans with populations residing in the Caribbean sea, Atlantic ocean, Pacific Ocean and the South China sea. The top destinations for Dorado are Mexico (Los Barriles), Costa Rica (Crocodile Bay) and the seas off Florida which are fished by many anglers looking for Big Game species.

The Dorado is targeted by trolling lures or baits behind a moving vessel(Boat/kayak), these highly predatory fish will readily hit anything that resembles food as it is passed in front of their noses. These fish will hit hard smashing a rod around in the blink of an eye. Another top tip for seeking out Dorado is to look for debris floating on the water’s surface as these fish will hang around any items that are left drifting the oceans. 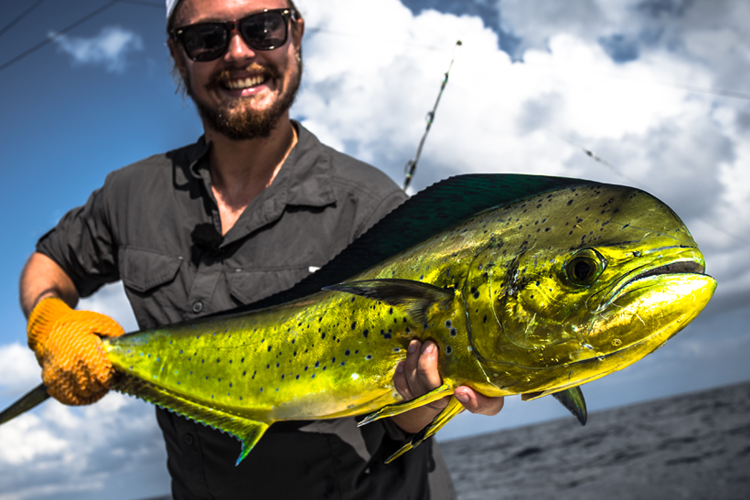 If you have any queries or questions around catching Dorado or any of our Big Game Fishing holidays contact us today. You can call our office on 01603 407596 and we can put you on track to the best destinations around the world. Remember you can always request a free brochure here.