Atlantic Salmon fishing trips are steeped in history. The species is considered by many as the royal fish for any freshwater fly fishing angler. Unfortunately, Atlantic Salmon numbers have declined over the years in the UK.
However, in other countries around the world, commercial fishing has been restricted. There is still a fantastic fishing experience to be had. The season for Atlantic Salmon tends to be short. Timing is crucial, and where our expertise is invaluable. We ensure that all our customers only travel to our lodges in peak season. 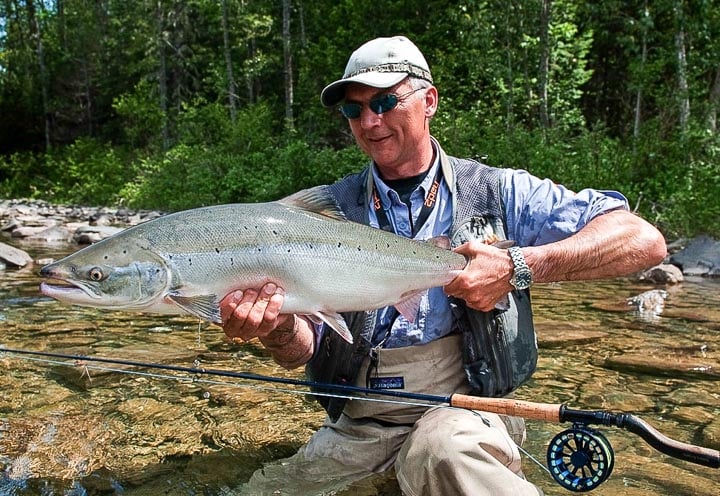 The Reisa River has a reputation for big Salmon that are caught annually here weighing around 20 kg. So if you are looking to set a record, the Reisa River may be the right place for you, just ask Scott Mackenzie who has caught his last 3 personal best Atlantic Salmon with us... Read more

Winsnes Lodge on the River Guala is a great destination for any Salmon angler wishing to experience a well run Salmon river. The Gaula River appears in the top five rivers in Norway most years for its regular catch statistic’s and Winsnes Lodge is a very large contributor to these statistics... Read more

The Salmon Lodge sits on the banks of the world-famous Grand Cascapedia and offers you the best chances of catching Atlantic Salmon in Québec’s famous Gaspé Peninsula. One advantage of this lodge is the access to three famous rivers offering you the opportunity of some huge fish over 40lb while fishing in the middle of exceptional scenery... Read more

Orklagaard lodge gives anglers the best chance of connecting with multiple Orkla river Salmon whilst fishing this fantastic river. This lodge treats each and every guest to superb hospitality and genuine care, a week at Orklagaard puts you in some of the best hands in the business... Read more

Atlantic Salmon are anadromous, which means they can live in both fresh and saltwater. They have a relatively complex life history that begins as eggs in rivers. Here they grow into juveniles before migrating to saltwater.

Here they grow and mature before returning to freshwater as adults to spawn. Unlike Pacific Salmon, Atlantic Salmon try to return to the sea after spawning. They do this to replenish all the weight they have lost through the stressful process.

Not all Salmon will make it back. For many, the stress can be too much. However, the ones that do make the whole journey will be ready to return to spawn again after a couple of years rest. It is these multi spawning fish that tend to be the larger specimens all Salmon anglers wish to target.

Young Salmon that are still in freshwater rivers are Parr; at this stage, the fish have brown to bronze-coloured bodies with dark vertical bars and red and black spots.

Atlantic Salmon in the wild

These markings are designed as camouflage to help protect them from predators. Once the Parr is ready to migrate to the ocean, their appearance changes. Their vertical barring disappears, and they become silvery with nearly black backs and white bellies. When they are adult fish, they are ready to return to freshwater to spawn. They grow very bright silver with black speckled spots.

Once Atlantic Salmon have been in fresh water for some time, they darken to a bronze colour before spawning in the Autumn. After spawning, adult fish (which are now referred to as Kelts) can darken further. They are often referred to as Black Salmon. Once adults return to the ocean, they revert to their counter-shaded colouration dominated by silver.

Atlantic Salmon that return to rivers to spawn will tend to be on average four years old. These fish will have spent two years in the freshwater rivers as Parr. Before spending the last two year out in the ocean feeding and packing on weight.

These fish are often referred to by anglers as sea winter fish. They would be on average around the 8lb to 12 lb range. Juvenile fish that return after just one season out at sea are known as Grilse. By their nature, they will be smaller fish.

The average size of fish is the 2-winter fish that average between 8lb to 12lb. However, it is still possible to catch smaller Salmon around the 4lb upwards mark. Right the way through to that fish of a lifetime. With a weight well over 40lb. Make sure to head over to our YouTube Channel and watch some of our exciting Atlantic Salmon Fly Fishing videos to get a taste of the action.

Where to catch Atlantic Salmon

There are three groups of Atlantic salmon: North American, European, and Baltic. These groups are found in the waters of North America, Iceland, Greenland, Europe, and Russia. Atlantic Salmon spawn in the coastal rivers of northeastern North America, Iceland, Europe, and north-western Russia. These groups of fish always return to their respective rivers. It is here where fly fisherman from all over the world target the King of all Salmon. The bright chrome Atlantic Salmon.

Most travelling anglers from the UK are looking for better fishing. Due to the unfortunate decline in Scottish Salmon numbers. The most popular Atlantic Salmon rivers are located in places such as Norway on the Gaula River, Reisa River and Orkla River. In Eastern Canada, on the east coast, the famous rivers for Atlantic Salmon are Bonaventure and Grand Cascapedia, Petite Cascapedia and Sainte-Anne River.

Fishing holidays in Canada are also renowned for holding the record of the largest Atlantic Salmon ever caught. Your chances of catching a personal best in Canada are solid. In Sweden, there are some tremendous wild rivers. As Sweden is not well known with travelling anglers, the rivers tend to have less pressure. These rivers include Byske River, Sävar River and Ore River.

Fishing for Atlantic Salmon can be conducted with single-handed rods mainly but only on small rivers. The traditional method is Spey casting. This involves the use of a double-handed rod. Which is not there to try and help you cast further, but also to help you control your fly rod line.

Although there are many variants, anglers mainly cast downstream a little from the noon position. They then allow the fly line to swing the fly across the current and river towards the bank. Usually, an angler will start at the head of a poll/beat and fish for Salmon on their way down. Taking two steps after two casts.

When reaching the end of the pool/beat, it’s best to rest and relax on the fishing river before starting the process again.

The variety of flies is enormous, and they all have their place on the right day and right time. The majority of times anglers will use wet flies, that sink below the surface. Some of these flies are fished on both plastic and metal tubes. Allowing the fly to sink quicker and deeper.

Other flies can be used, such as dry flies which stay on the surface like a falling leaf. The fishing rivers in Quebec are famous for this. There is nothing more exciting than watching an Atlantic Salmon rise to take your fly off the surface. In other location such as Iceland and Russia, skated flies or waked flies are used across the surface.