Every saltwater sport fisherman has heard of the Tarpon and if you have had the chance to catch one, you will know how addictive and how frustrating these fish can be. The bone hard mouths make them very hard to stick on the hook and you should expect to land 1 in 8 fish hooked. Living in both, fresh and saltwater, they are found in and around many different countries. The most famous is Florida and Costa Rica. Both offer different ways of targeting them, but the best is certainly on the fly.

El Faro Lodge Cuba offers saltwater fly anglers the perfect opportunity to target Bonefish, Tarpon, Permit plus so many more species. With its vast protected areas to fish ensures that you are only fishing rested fly water giving you more opportunities at taking fish. Combine this 1st class fishing with a top-quality lodge and all single rooms and you have the perfect saltwater fly fishing trip... Read more 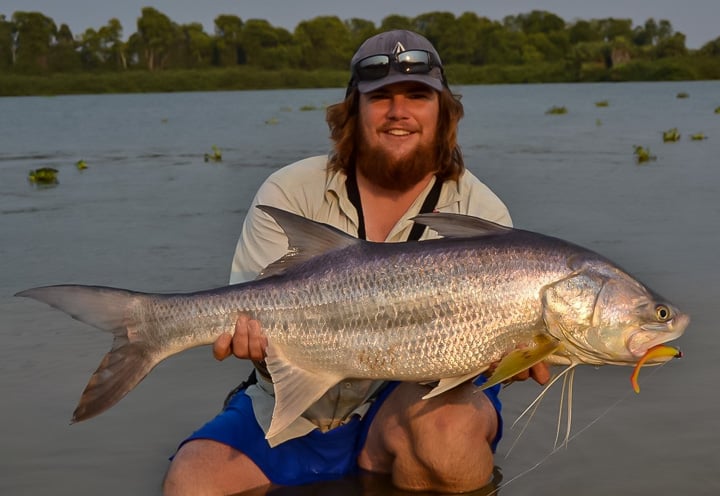 Some of the most fantastic Fly Fishing Ascension Bay has to offer, GRAND SLAMS and SUPER SLAMS are very achievable with some of the most skilled and knowledgeable guides in the whole of Mexico. This is the perfect destination for the flats fishing Enthusiast... Read more

Silver King Lodge in Costa Rica has over the last few years built a reputation as one of the best huge Tarpon destinations around the world. Silver King Lodge is located in a lush tropical environment on the banks of the Rio Colorado on the northeast coast of Costa Rica... Read more

Without doubt one of the world’s finest fly fishing Tarpon destinations that has managed to stay below the radar resulting in large and aggressive Tarpon who are not afraid to charge and inhale a fly. Overall, expect many shots at fish from 60 to over 200LBS each day as the Tarpon are active feeding fish with very little fishing pressure... Read more

This is flat’s fishing far beyond your wildest dreams! The Isle of Youth lays 100km off the coast of mainland Cuba, nearly straight south of Havana. If Tarpon are on your hit list this is definitely the destination for you. There are both resident and monster migratory Tarpon just waiting for you... Read more

This great resort provides fantastic fly-fishing and provides a great safe, exciting and entertaining destination that you can bring and enjoy with your family. The beachfront location of this resort provides several amenities for your enjoyment, whether it is arranging for a massage in the lodge massage room or a day out on the flats... Read more

Turneffe Flats is one of the world’s premier flats fishing destinations combining a remarkable fishery with excellent English-speaking guides, top-notch equipment and superior service. The ability to sight-fish for Bonefish Permit and Tarpon on any given day makes Turneffe one of the few places where a Grand Slam is always a possibility... Read more

Description: Because of their large size, legendary strength and stamina, magnificent beauty, and habit of jumping when hooked, the Tarpon is among the world’s most prized game fish. Tarpon are toothless and they swallow their prey whole. That’s why I say as soon as you know the fish has hit tighten down on the line and set the hook. Adult Tarpon are four to eight feet long and weigh anything from 10lb to 280lb. They have slender bodies which are a silvery and shiny with blue-grey or greenish backs and dark fins and tail. A Tarpon’s mouth is large and upward, it is mostly hard, bony and rough like sandpaper that’s why it is always hard to set the hook and drive it home. Tarpon are also special because they are one of the few fish in the world that have a swim bladder which also acts as a lung so they can breathe raw air. They can still breathe like most fish breath through their gills. This is one reason it is thought that they can battle for so long, because of the amount of oxygen they are able to take in throughout the fight.

Where To Catch: The Atlantic Tarpon is found throughout the Gulf of Mexico, on the coast of the western Atlantic Ocean from Brazil to Virginia, and on the west coast of Africa. Their range has extended to the west coast of Panama and Costa Rica, presumably via the Panama Canal. Tarpon populates a wide variety of habitats but are primarily found in coastal waters, bays, estuaries, and mangrove-lined lagoons within tropical, subtropical, and temperate.

Average Size: Tarpon can be found as juveniles in what is often called Tarpon Nurseries, these fish can be anything from 5lb to 40lb. These nurseries tend to be around mangrove canals and lagoons as these provide protection to the small fish from sharks which is the Tarpons number 1 predator. Once they reach about 40lb the Tarpon tend to move more to open water but still remain not too far from the origin. However, once these fish then reach sexual maturity they join migratory groups that travel many hundreds of miles following bait fish. During the breeding season, these large mature fish that can reach well over 200lb come back to the mangrove shorelines to breed.

Fishing Methods: There are various methods of catching a Tarpon and also many places around the world that offer each or all these methods. It all comes down to how you like to fish. First, let’s look at bait fishing for Tarpon, this can be in the form of live bait and dead bait as Tarpon we also happily pick up a free meal of a dead fish lying on the bottom. When fishing with live bait it is either fished under a flat and held out the back of the boat anywhere between 30 to 80 yards out. You can also troll with live baits again behind the boat. At certain times of the year, anglers can also use live crabs that again are just freelined behind the boat. One thing that will surprise you is just how gentle Tarpon will take a live bait or Crab, many times the angler totally misses the bite.

Finally, the ultimate challenge is trying to catch and land these fish on the fly, considered by many saltwater anglers a real silver prize as they are really known for the difficulty in catching on the fly and their fighting capabilities. Fly fishing although you can fish with a sinking line and dredge areas that you know have Tarpon, but by far the most exciting method is sight fishing. This way you spend many hours looking for Tarpon on the shallower flats feeding. You then try to approach them without spooking the fish. Cast and strip, as its sight fishing you can see the Tarpon chase down you fly sometimes right up to the edge of the boat. Makes for very exhilarating fishing and the perfect locations are in Mexico and Cuba along with some of our clean water fly fishing lodges in Costa Rica.