Tuna Fishing Holidays will take you around the world as Tuna are one of the most widely spread fish species across the planet. Often targeted as a sportfish anglers will travel to some pretty far away destinations in search of the biggest of their chosen Tuna. Such Tuna Fishing Holidays can take you to place like Panama, Mexico, Costa Rica and Rodrigues Islands just to name a few places. The Tuna family show up in a variety of locations from really deep water to some seriously shallow bays. One thing that all the Tuna family are known for is their fighting abilities, with many people saying that they never give up and fight their hearts out. This is what attracts so many people on Tuna Fishing Trips from around the world who are in search of the hardest and longest fighting fish on the Planet.

Below we have put together our top Tuna Fishing holiday destination

This fishing adventure is like no others out there! Rodrigues Island offers anglers a unique opportunity to fish for some incredible species. The fishing style used is completely down to you as the itinerary can be completely tailored to suit how you wish to fish and the species you wish to target. In addition to this, we some excellent tackle package waiting on board for you to use completely free of charge... Read more 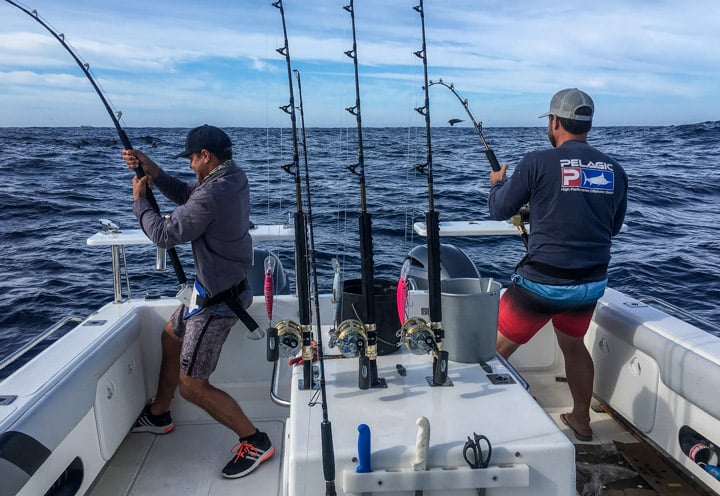 We are incredibly pleased to be able to offer the most exceptional fishing trips Cape Town has to offer. Team this up with the best boats and tackle available and you will soon find yourself being hooked up to one of the hardest and dirtiest fighting Tuna that swims our oceans... Read more

Our fully hosted holidays to Mexico have been running for many years and this is due to how incredible the fishing is. Each year we help many anglers catch their target species and 9 times out of 10 these anglers will book year after year... Read more

If you are in search of a true specimen, then Prince Edward Island is the place for you. The Bluefin Tuna that surround this Island are beasts and will test any angler to his limit. These huge Tuna grow excess of 1000lb’s and are caught regularly by anglers on stand up and fight, but make sure you take your “A” game... Read more

Looking for your next extreme fishing adventure? Well, we are extremely pleased to be able to offer the very best popper and jig fishing Madagascar has to offer. Utilising our live aboard Catamaran and top of the range sport boats, you will be fishing a huge diverse range of unspoilt and un-fished areas... Read more

While on your Tuna Fishing trip you will find that the Tuna family are a variety of fish that need no introduction to the travelling angler. These solid lumps of muscle will put a smile on anybody’s face who is lucky enough to hook one. Ranging in size from the smallest Albacore Tuna which reaches only a few pounds all the way up to the monstrous Giant Bluefin Tuna. Most of the Tuna family will test not only the strongest of tackle but also your own mental and physical strength. Of course, it is not only the fight that makes the fish so highly sought after, but Tuna is also a fine tasting meal and there is nothing nicer than freshly prepared sashimi

The Tuna is a sleek and streamlined fish, torpedo in its shape which is adapted for speed. It has two closely spaced dorsal fins on its back, seven to ten yellow finlets also run from the dorsal fins to the tail. The Tuna‘s dorsal side is generally a metallic dark blue, while the ventral side, or underside, is silvery or whitish, for camouflage. The Tuna adapt very well to its prey, and once the prey is located the Tuna tuck their fins in and attack at the speed of light. On your Tuna Fishing trip, you will find that Tuna normally feed in very large shoals which is great for the angler as you will get shot after shot at the busting shoal of Tuna.

How Big Do Tuna Get?

Tuna can range from just a few pounds in weight all the way up to the biggest specimens that can weight in excess of 1000lb in weight. The Giant Bluefin Tuna are one of the largest of its family and can be caught in places such as Nova Scotia in Canada and La Gomera in Tenerife in the cooler months. Yellow Fin Tuna are usually the second largest of the Tuna family with fish reaching weights over 400lb

Where are the Best Places to Catch Tuna?

Tuna can be caught all over the world when on your Tuna Fishing vacation, in the many oceans but there are certain places where you have a better chance of catching these fantastic fish. Places that come highly recommended would be destinations such as Mexico, Costa Rica, Panama, La Gomera, Nova Scotia, Andaman, South Africa and Rodrigues Island to mention just some of the best Tuna fishing destinations. If there is a certain species of Tuna you are looking to catch then call one of our dedicated Big Game experts who will look at your targets and make suggestions from their knowledge.

How To Catch Tuna?

While out on your Tuna holiday methods vary and is usually dictated by how the Tuna are feeding. Some destinations will troll artificial lures behind the boat and is a matter of waiting to come across one. Other methods to target Tuna are popper fishing or vertical jigging. These lure fishing methods to catch Tuna are very explosive with the Tuna sometimes jumping out of the water to attack your lure. The bigger Giant Bluefin Tuna tend to be caught on bait and can sometimes be caught right next to the boat as they feed on free offerings. We have written some great blog articles on Popper fishing methods and sometimes something that is overlooked is what is the best saltwater clothing to keep you out of the sun.

Our dedicated big game fishing team have a vast amount of knowledge of Tuna trips and can advise on the best Tuna fishing destinations. Feel free to give us a call on 01603 407596 for a chat, alternatively, you can contact us leave your details and we will call you back so we can discuss the best Tuna Fishing options