Our fourth week of the season brought some tough weather but also great fun.

After days of heavy rains, the Secure River experienced higher water levels, milky colours, and cooler temperatures. Regardless, we were able to find good water and plenty of fish to make for a great week.

For our fourth week, we hosted Brad Mc Keon, the winner of the New Jersey Fly Fishing Show giveaway, and three French Canadian friends, Cyril, Chris, and John. The first day of the trip couldn’t have been better, as Cyril caught the biggest dorado of the week — a 17 pound fish! And that was just the beginning of a remarkable week. Brad had an unforgettable experience, catching the three sport species — yatorana, pacu, and dorado, and he ended up losing what we think was the largest dorado so far this season. He promised he will be back to win that battle. 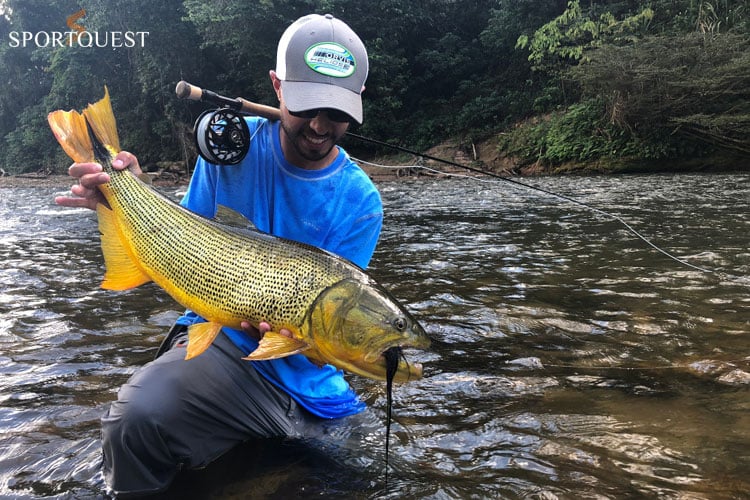 On Monday, after 24 hours of non-stop rainfall, the Ushwea tributary was unrecognizable because it was so muddy, making the downstream section impossible to fish. We decided that we would have better chances a bit further up, and we did! Cyril, Chris, and John went camping for five days upstream, and despite the rain, they caught many nice fish and had lots of fun.To sum it up, it was a week full of nice fish, great food, and excellent company at Secure Lodge! 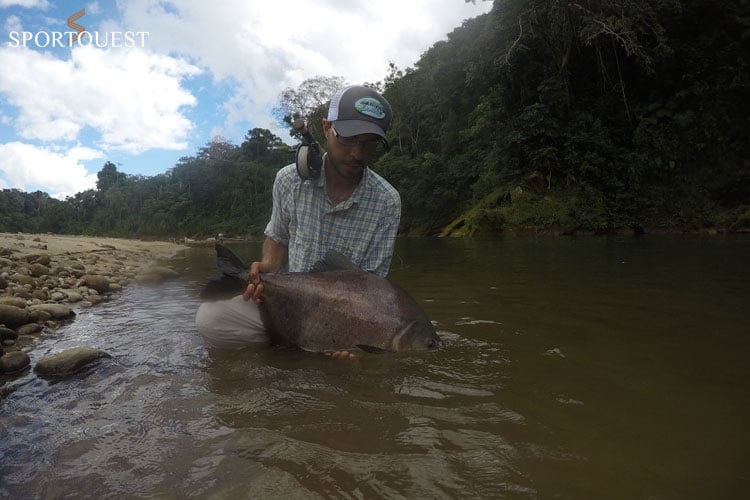 Our second week brought us unpredictable weather but also some good fish.

The week began with six anglers made up of four Americans and Robin and Piers who came all the way from England to discover the treasures of the jungle.  We had excellent weather for the first few days, followed by rains that gave us a flooded river for a day and a half. 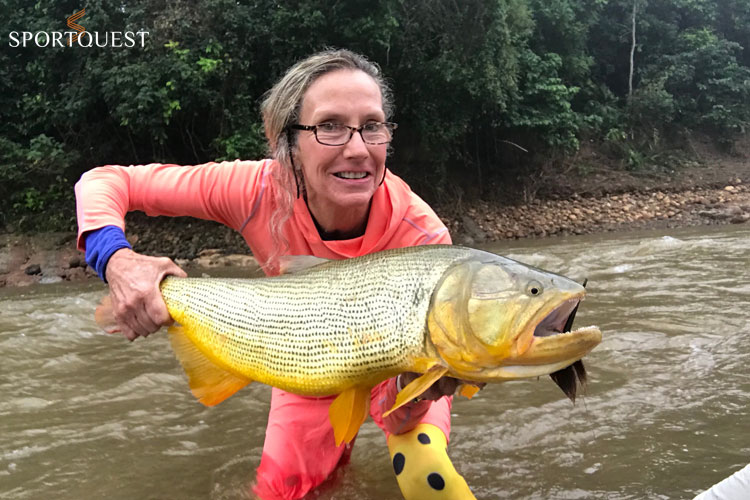 In the Lower Secure, Seth set the bar pretty high after landing a 25 pound fish on the first morning. On the following days, we landed a good amount of fish in the 12 pound range, and Piers caught another 25 pounder on the last day.

The Main Pluma was good but technical as always, and after the rains, we found that topwater patterns were best. We used mice, gurglers, and Titanic sliders with great success. Chuky’s signature Jochi-Fly (13-inch articulated mouse) and a 12wt rod gave Ginny an 18 pound fish and an unforgettable memory. And Robin surprised everybody when he landed a 15 pound catfish on the fly the second day.

On the Itirizama River, we had many opportunities to sight fish and catch fish in the 10 pound range, and we even caught a couple in the 16 pound range.

The unpredictable weather kept us from making it to the overnight camp, but we are looking forward to it getting up there soon. Thanks to Gray, Piers, Robin, David, Seth, and Ginny for visiting us. 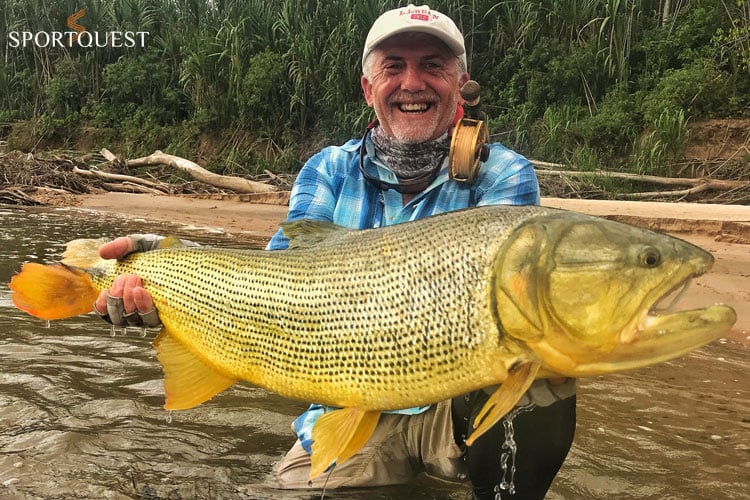 Fly fishing for dorado is growing in popularity, and it’s exciting to watch anglers take on this whole new experience. This amazing fish constantly challenges us to discover the best ways to fool them, and it’s always a thrilling experience when everything comes together.

The fourth week of the season gave us the chance to share amazing moments with Steve Wells and George Pieger — two experienced anglers who have travelled all around the world fly fishing. Bernardo Delgado and Felix Romero Zambrano, both visiting us from the north of Argentina, made up the rest of the group. These two old friends were visiting Tsimane for second time and shared with us all of their experiences of growing up fishing for dorado in very similar rivers in Argentina. 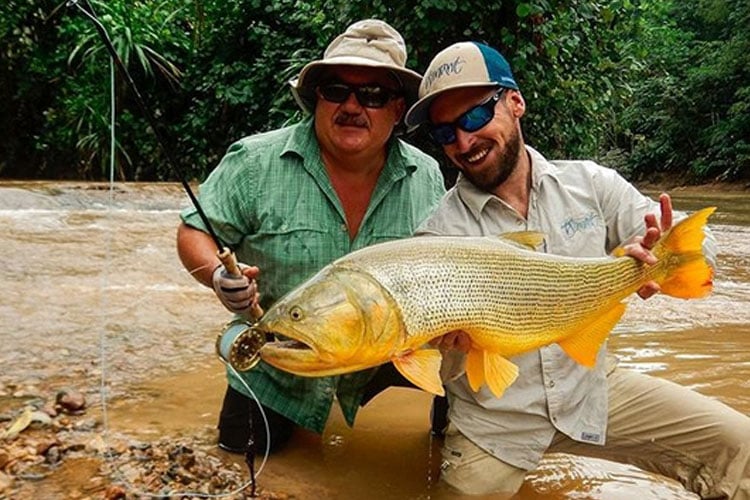 The weather conditions were good at the beginning of the week with temperatures during the day around 28ºc and a bit cooler at night. The water was still a little bit off-color due to the flood we had at the end of the previous week, but it was not a problem. Steve and George spent the first couple of days fishing the main Secure River, and on the first day, Steve caught huge pacu, some really good dorado, and many small and medium-sized dorado.

While Steve and George found success on the Secure River, Felix and Bernardo hiked the beautiful Agua Negra River in the search of a golden trophy. Fishing for them was very good, and fortunately the weather allowed the team to make it to the camp and enjoy more of the jungle. They caught some really good dorado, but the finishing touch was a 22-pounder and many small and medium-sized dorado with a black mouse pattern. Dorado on mouse flies is always fun, and we gladly kept fishing these flies for the rest of the week.

Mid-week rains increased the water level of the rivers, but fortunately we could keep fishing the tributaries, rocky mountain rivers that get clear a lot faster, and in the very shallow waters where George caught his biggest fish — a beautiful 15 pound dorado.

The black mouse pattern kept on working and made for a lot of fun as these flies brought the fish out from the logs to attack the fly on the surface. A great week!