Warning This May Cause Addiction

Warning This May Cause Addiction

The fishing in the Andaman Islands is what dreams are made of and if you are a die hard popper and jig fisherman then this destination must be right up there on your bucket list.

We have managed to secure yet again another single angler week for 2018 season which we will release soon as all our 2017 and 2018 single angler weeks have now completely sold out. So if you are a single angler or just a couple and have always fancied a dedicated popper and jig fishing holiday for fish that beat you up and spit you out then look no further than the Andaman Islands.

“More single angler weeks are due to be released soon”

The below report has been sent to us from head fishing guide out at the Andaman Islands:

Carrying over from our last week, with near perfect calm conditions and with just the right current, we moved into the full moon phase and had two groups running together – a group of single anglers comprising of Kurt, Kenny and Oli, all of whom have fished with us before, were joined by Peter, who is just getting into the popping and jigging game, on one boat and three Italian anglers led by Angelo, along with Nicola and Massimo, on the other boat. With all the guys very eager to get on the boats after having spoken to Hout, David and Chris, who had just finished their trip, we decided to fish different areas with each boat so as to increase our chances of a shot at the big fish, which both groups were looking for. 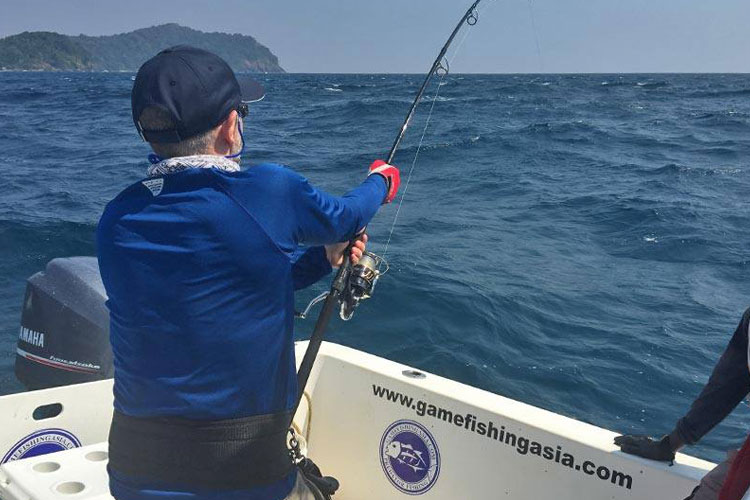 We had been looking at the forecast, which showed an increase in wind for the following days but was nothing that looked like it would make fishing not possible. So we set off the next morning into slightly choppy conditions. Halfway through the trip out to the fishing spot we were met by a passing front and for the first time that I have ever experienced a front like this, as we passed through it we were hit with a blast of cold air which was at least 10 degrees cooler and felt as if we had opened a freezer door – in the tropics of all places! 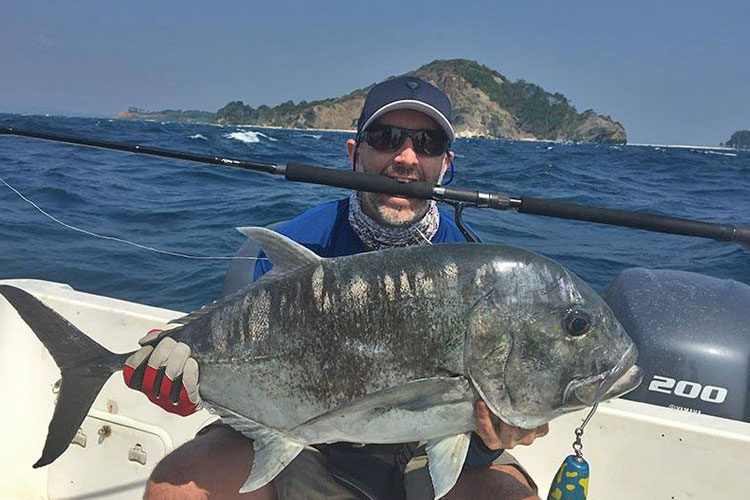 However, in the rain the GT bite really came on and we had multiple strikes with Oli coming good on a 20 kilo fish, to get started. Meanwhile, at the end of the boat, Kurt was pulling in one big Barracuda after another on his Red Adhek lure. All the guys got fish and after lunch, with the winds picking up, we needed to head back. Nicola, Angelo and Massimo also had strikes and fish along the way down to Little Andaman but the moment the winds picked up the bite went off and with Angelo getting seasick we needed to head for port. 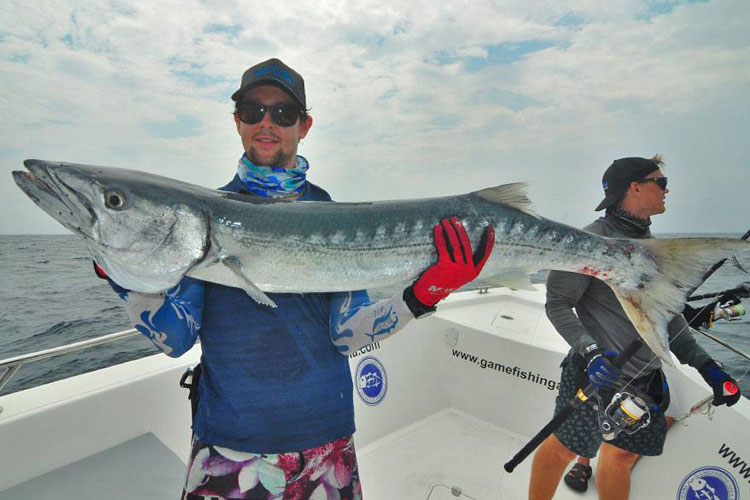 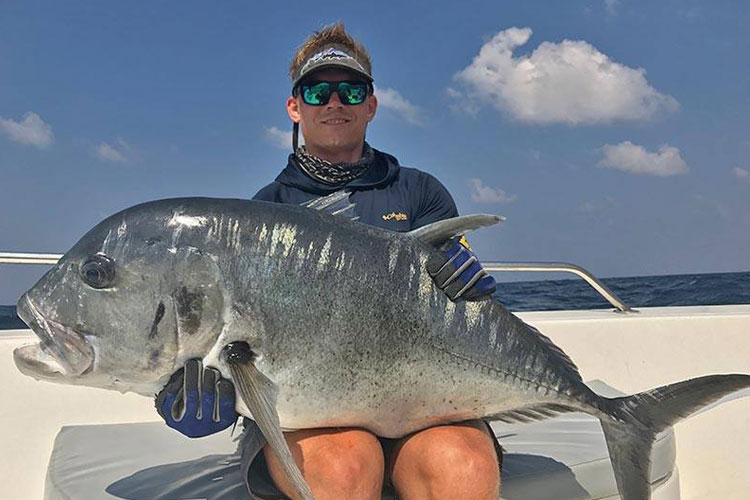 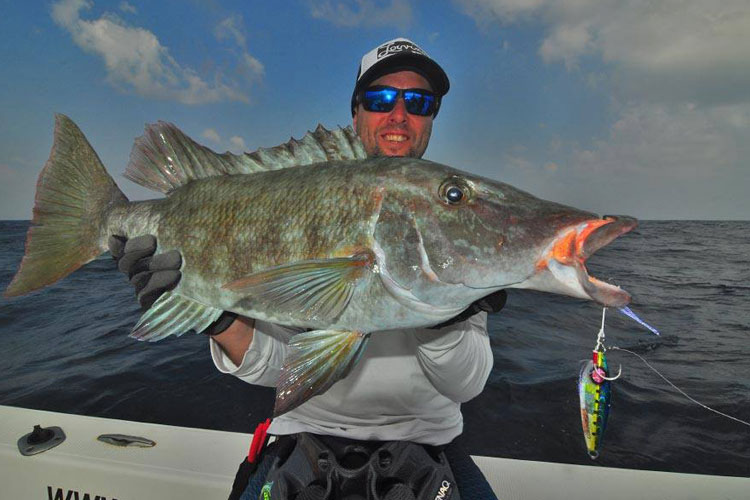 The next day saw us fishing the lee of the Islands; we had a few fish in the 18-20 kilo range and Oli got bust off by a proper GT in very shallow water at the end of the day’s fishing. Meanwhile, as soon as Angelo, Nicola and Massimo had the chance to get to the lee of Little Andaman they were into the bite, with the big stick-baits working really well. We had multiple strikes, three massive hits, one which missed completely, one bust off and one which kept going and going until the hooks pulled which left all of us disappointed as these fish were all easily over the 30 kilo mark. 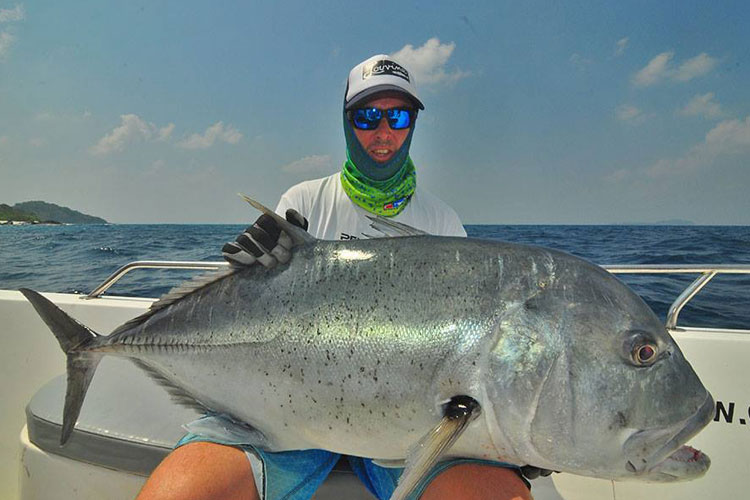 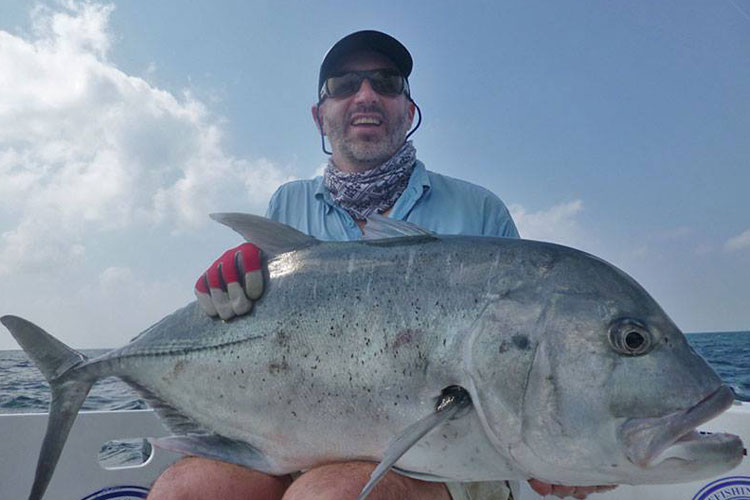 We were fishing a rocky island corner just around tide change and Oli decided to try a sinking stick bait. His cast was immediately inhaled and there was a good battle going on. After manoeuvring the boat into deep water we boated a proper Andaman GT. Next up was Peter for a fabulous strike on another monster GT which took his FC Labo Stickbait in gin clear water and without a splash it just sucked the lure in and went. This being Peter’s first big GT experience he set the hook and held on, moving the boat to get a better angle as the line peeled off the reel. We got the boat into deeper water but the 65lb Jerry Brown finally parted as the Geet made it to safety over the razor sharp rocks. 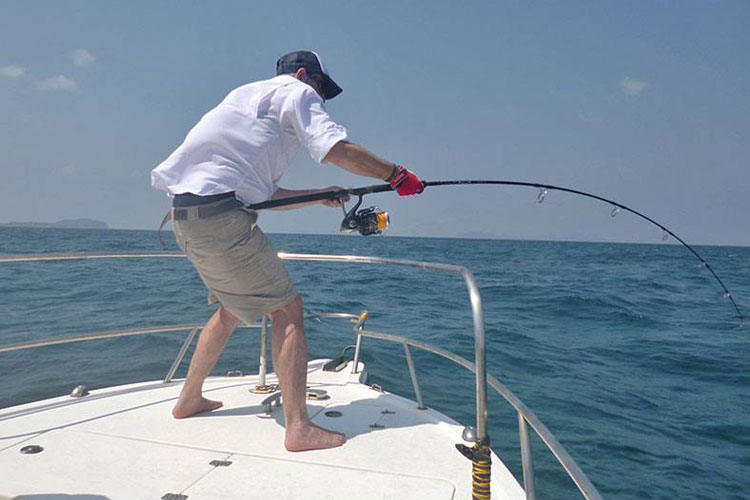 Meanwhile, the other guys were all pulling in smaller Geets and Oli had another big strike, again on the sinking lure, quickly getting the boat out into deep water. We got Oli to put on maximum pressure and after a really good fight we got another very good GT onto the boat. We then ran into a school of GT’s, with fish coming up on almost every cast. Kurt got five in a row and we must have put about 20 in total on the deck in a very short time. Oli, who had already got his fish for the day, started light jigging and was pulling out fish on each drop, in a multitude of species. What an amazing day! 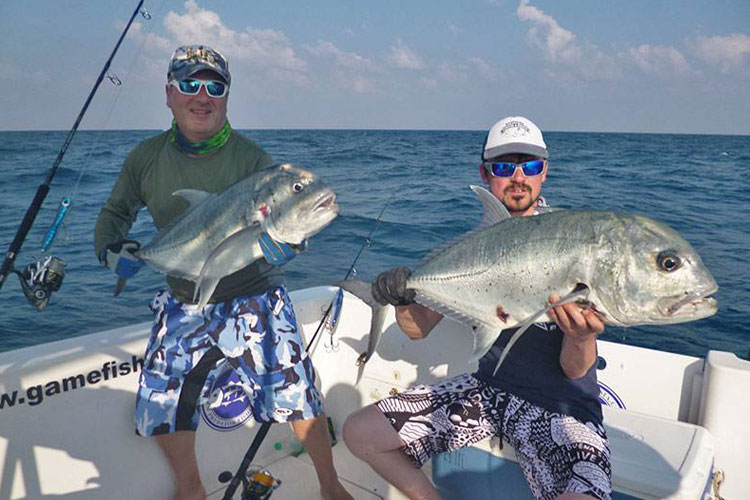 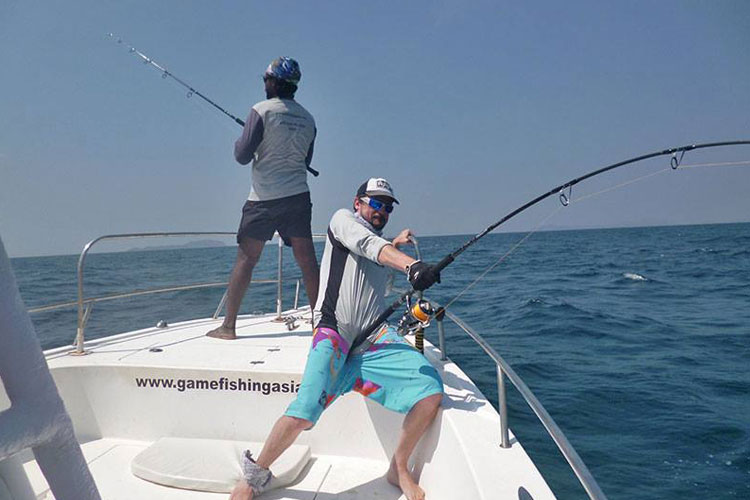 Nicola, who we renamed No-Limits after his buddy Daniele Grosso – an avid angler who fishes the heaviest tackle and strongest drags – was fishing an extended reef as we searched for fish and suddenly had his big Alles stick bait smashed. He held on as we watched the fish go towards shallow water and the reef in front of the beach. All we could do was hold on and hope and try to put as much pressure as possible. But again, no such luck as the line burst. We had another strike very shortly afterwards with another really big GT but it burst the 112lb Varivas on the strike; some “Black Cat” about?? 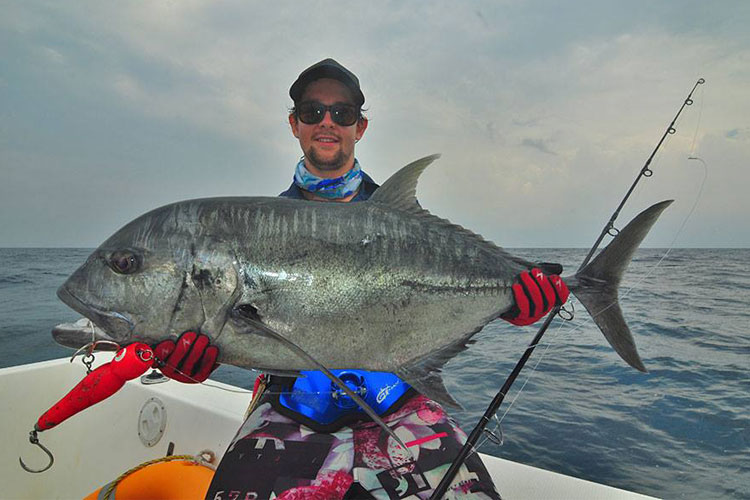 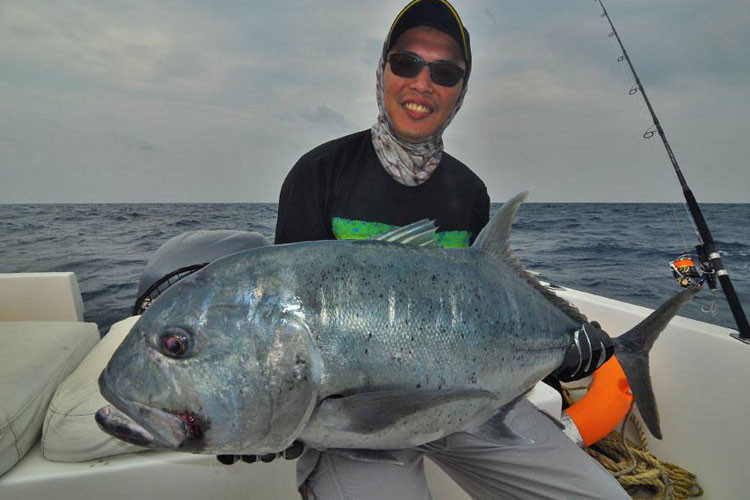 In Oli and Peter we finally had some guys who wanted to jig deep, so we jigged the 130-meter drop off. Mid way up he had a huge take that screamed off and took off a 100 meters of line before the mainline burst. Oli had a take on his jig and the line screamed off the reel, only for the hook to pull out this time. Moving to popping deep reefs we got followed by 2 sailfish that didn’t take the lure and landed a few smaller GT’s but lost another big one with a hook pull. Moving to another reef we saw some bait and cast. Oli saw the biggest GT he has seen crash the lure and on setting the hook, his 200 lb leader burst. Seconds later Peter had another massive fish take the lure and yet again the leader burst on the strike. What on earth was going on?! On the last drift of the day Peter’s popper was again smashed and the reel screamed; finally, after a great fight we boated a beautiful 40 kilo Andaman GT. Again, beginner’s luck and Peter was elated. 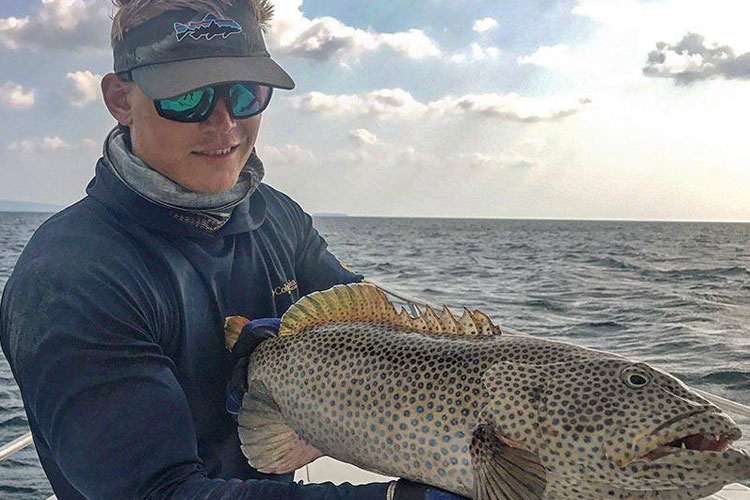 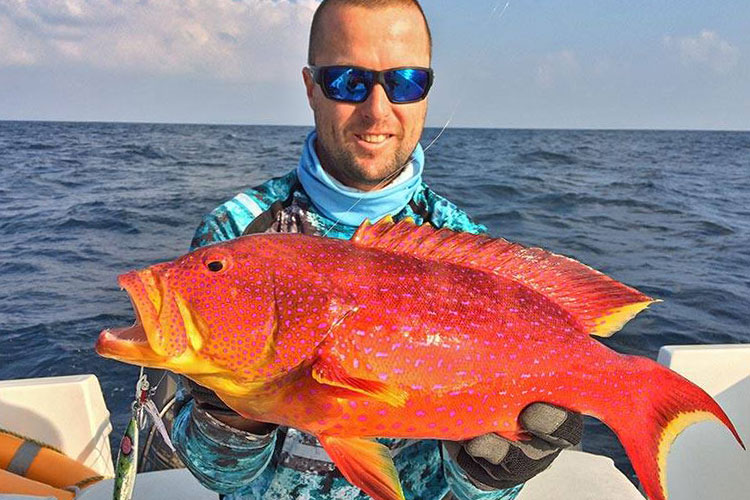 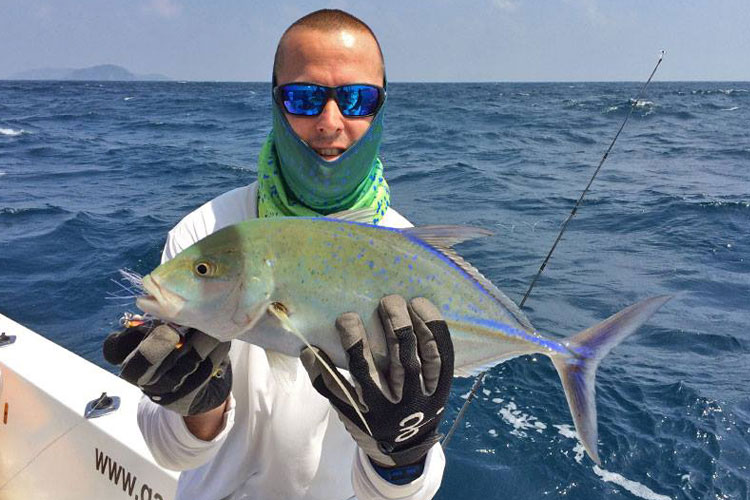 If we had landed half the fish we had chances with on this trip, an already great trip would have been spectacular. I guess another round is on the cards for all.