It was to be the first days fishing of our Fishing Report Norway today and with bright sunshine and no wind the boys were in for a treat and will get to see what the fishing at Soroya is really like, CRAZY….. 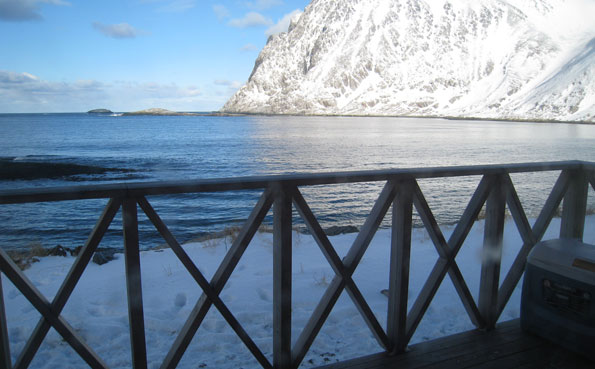 Thats what i like to see, flat calm and sunny. Good day ahead

If any of you have been to Soroya or read my Fishing Report Norway at this time of year then you will understand where I am coming from and why I am making such a fuss about how good the weather was. You have to understand that Soroya is a little Island way up north Norway and is surrounded by the open ocean so if the wind is from a westerly direction, it gets a little choppy to say the least, but if you miss a day or two the days you get out more than make up for it. Don’t get me wrong, I have been there when the weather has been perfect and we have had the full 6 days fishing and yes it was tiring…

So back to the day of this Fishing Report Norway, it was 5am when I was woken by my alarm and to my surprise everyone was already up and had the coffees on, I guessed they were keen to get out there. With a quick shower I was ready for my coffee and quick breakfast. The buzz in the cabin was brilliant and with what looked like an entire tackle shop spread across both tables, talk turned to what was going to be fished for that day. I automatically said “All you will need are the Big Bob Lures as we will be targeting the big ones today as the weather is so good” with that said around 10 – 15 big bob’s were loaded into everyone’s tackle bags ready for the day ahead. I quickly popped over to the other cabin and they were also ready to go and pounced on me as soon as I walked through the door asking a thousand questions…… So I sat with them for half hour trying to answer everything. Questions answered, thermals on and it was time to hit the water for what turned out to be a fantastic day on Soroya

As we walked down to the boats I could feel the excitement in the air as the guys really did not know what to expect. I try to explain how extreme the fishing is here but it isn’t until you have experienced it that you then realise what I mean. So with flotation suits on we made our way to the guide boat for a quick chat and to get a rough idea on what people want to achieve from their holiday at Soroya, some people have different expectations but all these guys wanted to catch the big ones which is what the guide and myself love to hear. 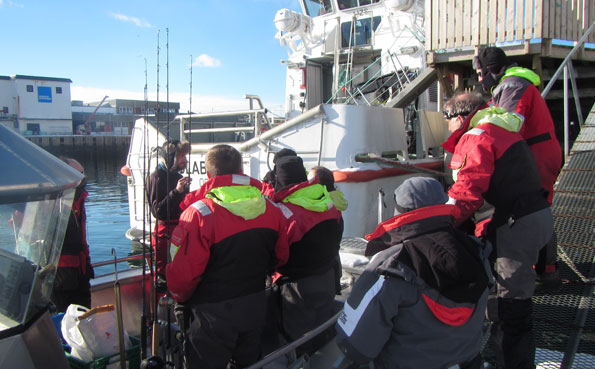 A quick briefing before heading out 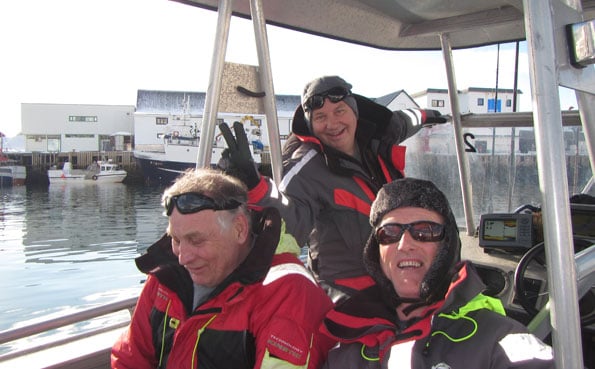 Plenty of banter between anglers

All the chatting done, it was time to show these guys what Soroya had to offer. So as we left the harbour both boats were opened up which made all the guys smile as these boats are very quick having 135hp engines so it wasn’t long before the boat was back in tick over looking for the shoals of big fish. 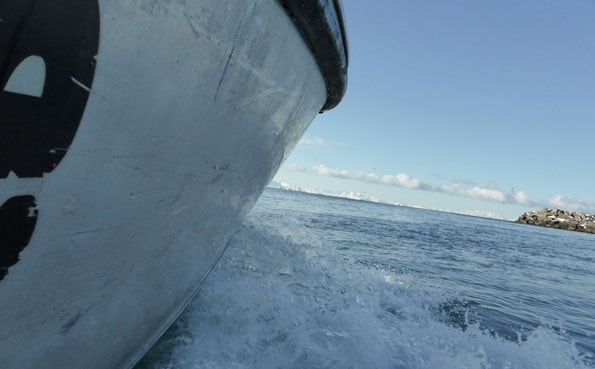 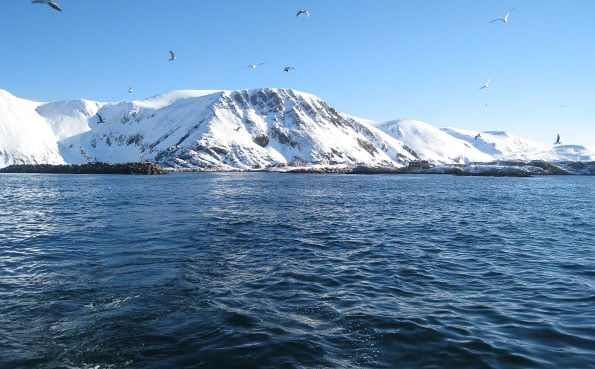 Starting to open the boats up, hold on… 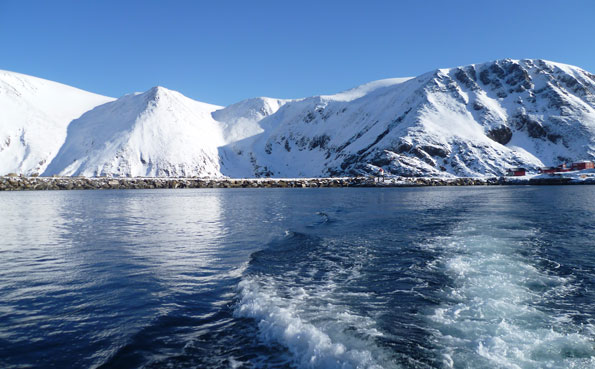 The views as we leave harbour are breath taking

Now you maybe thinking how do you pick out the bigger fish, well let me try to explain as i have done in my previous Fishing Report Norway. First we find the shoals and these are no ordinary shoals of Cod, they can go on for a long time being 30mtrs thick. Once we think that the shoals may contain larger fish, we then study the fish finders for what we call ‘Bananas’ these are always found above the shoals and are the big fish that we want to catch. So once we have found these we call out a certain depth and it is highly important that all guys fish at this depth so to create a shoal of shads, this bringing the large Cod up away from its shoal and hopefully grabbing one of the lucky anglers Big Bob’s. So as you may of guessed depth marked braid is a must with this type of fishing. 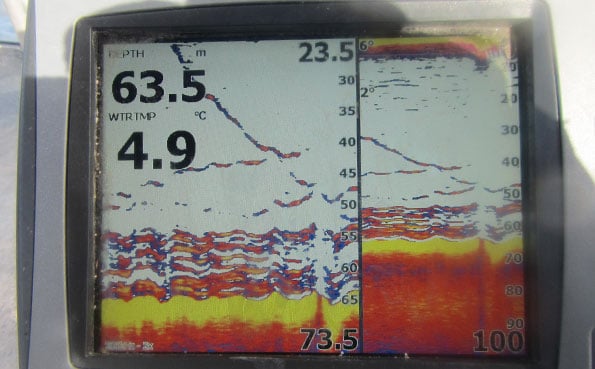 With that explained back to the fishing. It wasn’t long before both boats had found large fish and with a depth of 50mtrs called, four Big Bob’s made their way down in to the inky blue water. As the guys stood there waiting I could see on the fish finder the big fish peeling away from their shoal to intercept the anglers shads and whack…. One was in to what looked like a good fish then another rod bent over then another and then finally the fourth rod smacked over, so that is four guys bent into what looked like all very good fish, I couldn’t help but laugh out loud and shout “CRAZY SOROYA” 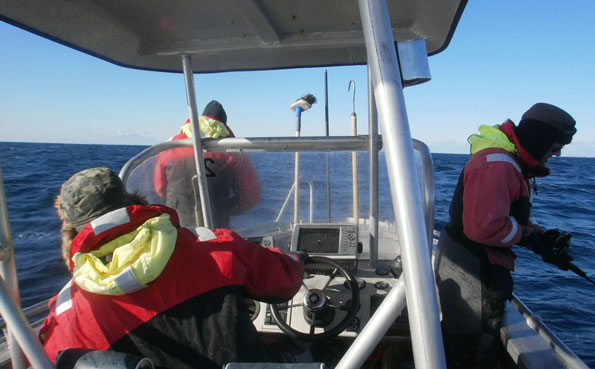 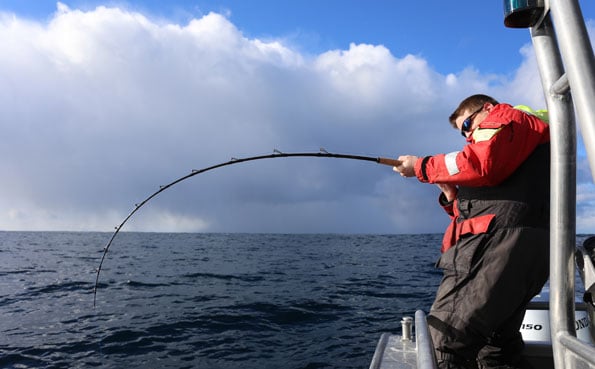 First rod in to a good fish… 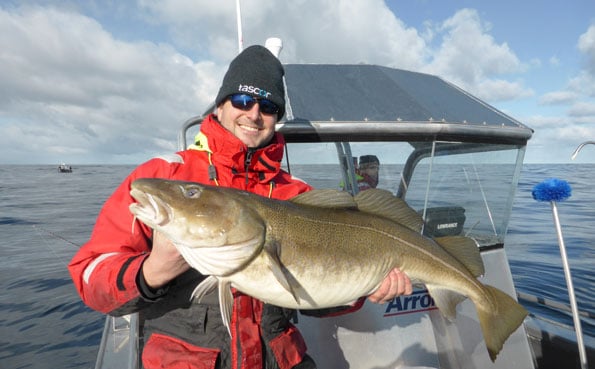 Nice size but they get bigger… 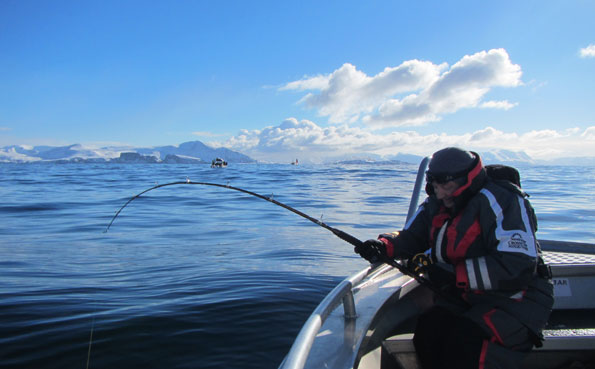 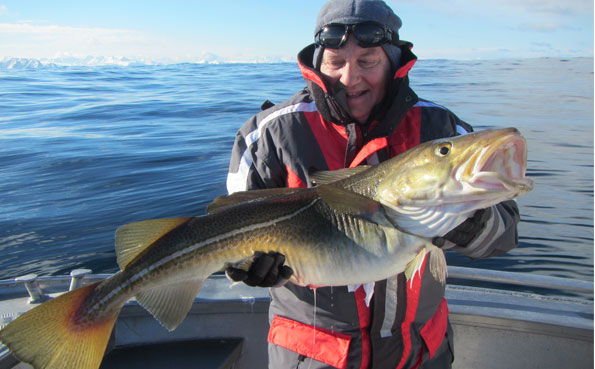 Not massive but its the first fish 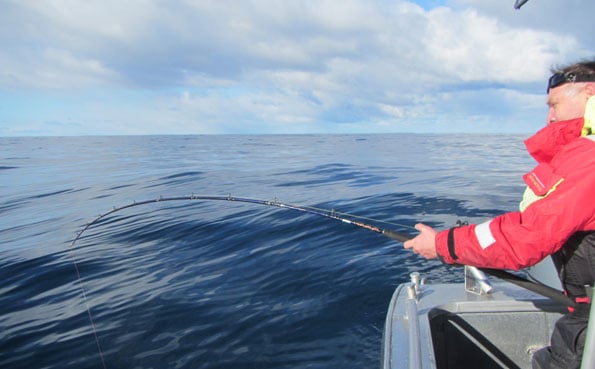 I explained to the guys the day before that when you have a fish on and you want to return them, once you first see it, normally around 6mtrs down, stop reeling let all the bubbles release from its belly then when you feel it fight back you can then reel it to the surface this way the fish will always go back unharmed. So with this in mind all the guys had stopped reeling at pretty much the same time giving the fish rest, once I could see the fish starting to fight back it was time for the keen anglers to see their catches 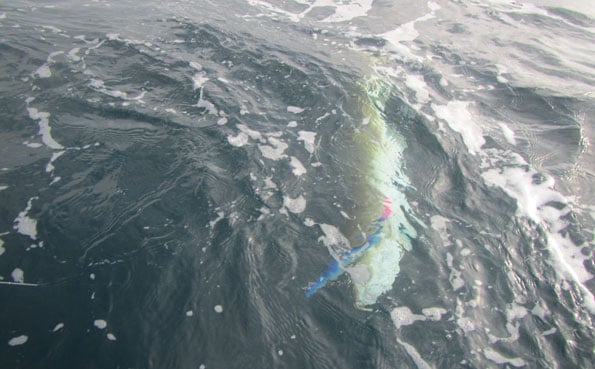 First one up and was around 18kilo, the angler had the biggest grin on his face and I simply said, “That’s tiny” and laughed he looked at me with a very confused expression. “You will see,” I said 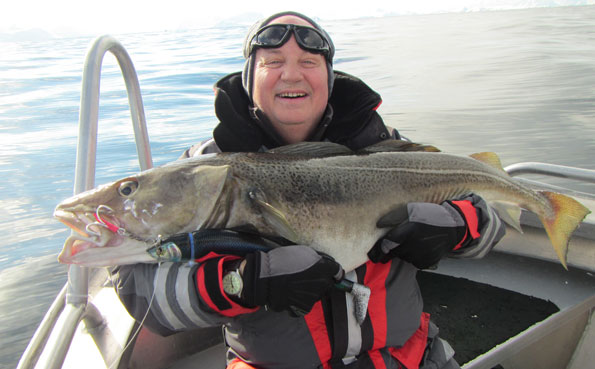 They are getting bigger

Second one up and it looked like a proper one, I asked the angler to step back whilst I heaved the fish on board. To his surprise the fish was huge, I thought to myself that it was around 23kilo, which was a great start for him. Pictures taken and fish weighed, it actually went 24.5kilo, and the huge cod was released. I then turned around to see another 20+ kilo cod waiting for me and one very happy angler attached to it. Up she came, photos done, weighing and a quick release. Sadly the other fisherman had lost his at the surface but confirmed for him that it would not take long before he had another. 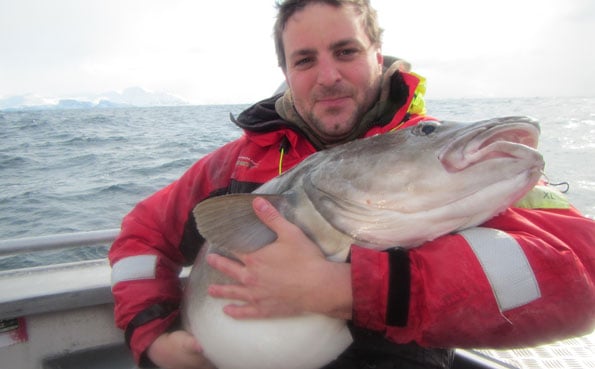 Now thats a good fish, i think Ian may of fell in love…… 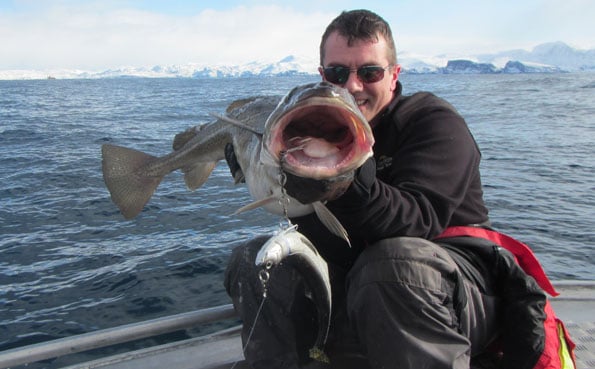 Look at the belly hanging down

I quickly radioed through to the other boat to see how they were getting on, they also had some crazy fishing with fish to 28.5kilo…. I forgot to mention that the guys had money on the biggest fish of the week so the guide and myself had our work cut out to see if we could beat each other. As the day progressed into afternoon they guys were looking a little fatigued after catching so many fish, I think we had around 10 – 15 20 kilo Cod and untold amounts of Cod up to 20kilo’s I asked the guys if they had had enough and with a little humming and haring the guys decided to head in. You may be thinking that why go in if the fishing is so good, then let me tell that it is an extreme experience for your first days fishing and the guys had caught so many cod. I radioed through to the guide boat to let them know that we were heading in to harbour and got a response of “We are staying…” I would have loved to have stayed as the weather is not like this for long and I knew the weather was going to turn tomorrow and may not get out, but that is up to the anglers on board. 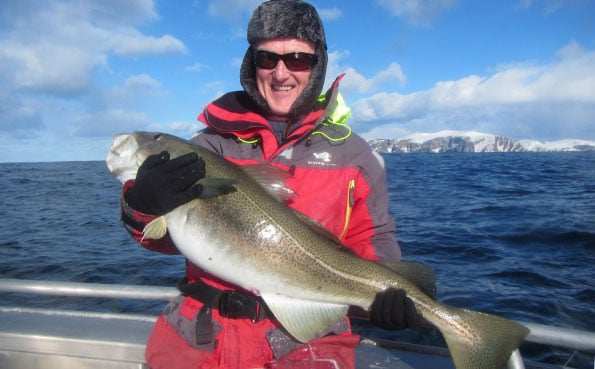 They don’t all have to be massive to be fun 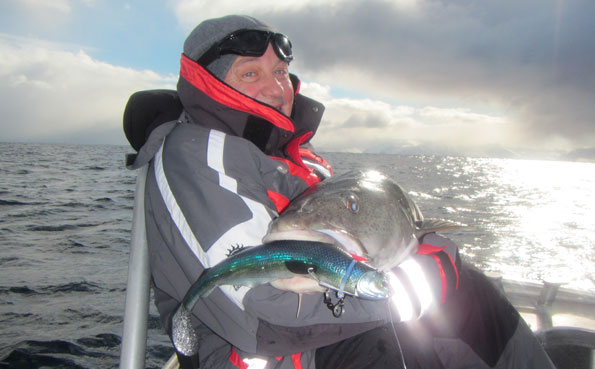 I just love this shot 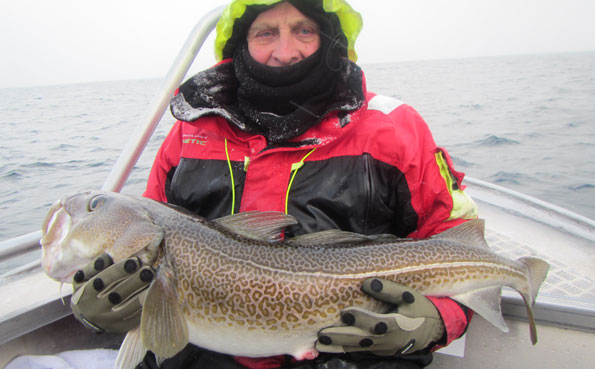 Looking at the markings on this fish, it might well be the prettiest Cod we caught 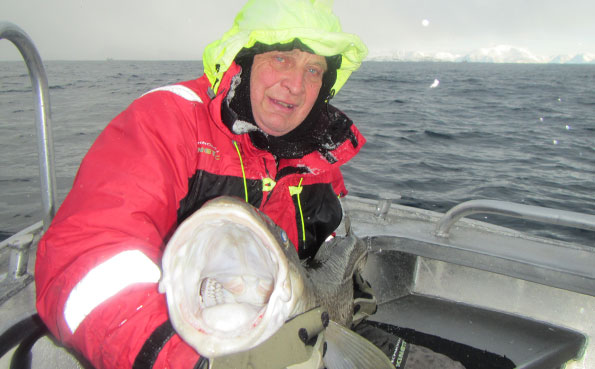 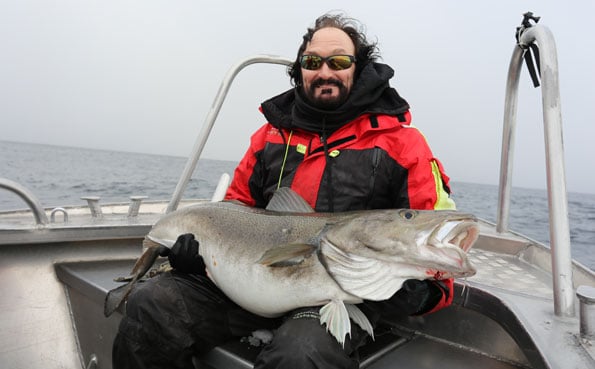 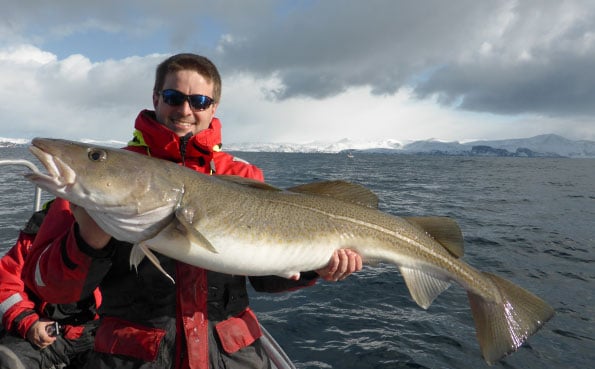 Ian at it again 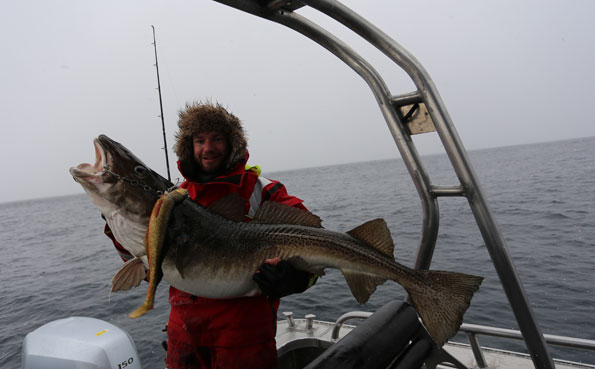 Even the Norwegian Guide had a go today 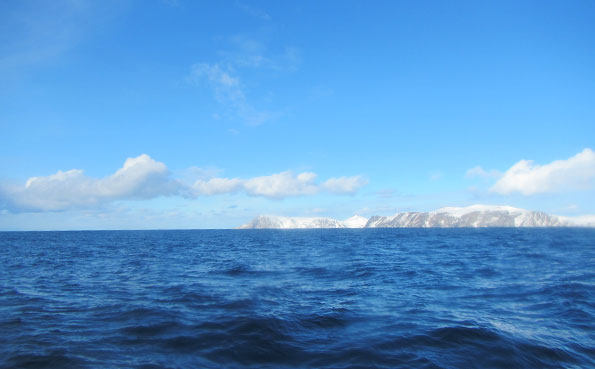 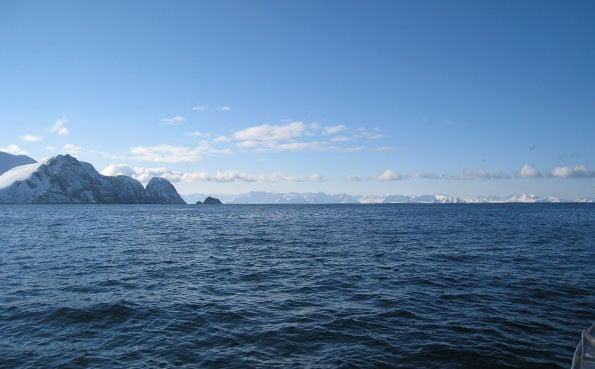 With the short ride back to harbour done and flotation suits hung up it was time for dinner and another shower. After I had finished with all the tidying up I got a phone call from a very excited angler that had stayed out there for one last cast, saying that on his last drop down he had caught a monster!!!! After I managed to calm him down he then informed me that the fish weighed 35kilo….. WOW was my answer and would of loved to have seen her. Fish was released after many pictures, now do I tell my guys or not, are they going to regret coming in early???? Well I couldn’t help myself and broke the news you should have seen their faces. Ian came back to the cabin with pictures of the huge fish and when I saw it I also couldn’t believe the size of her and ask Ian to tell us all about it 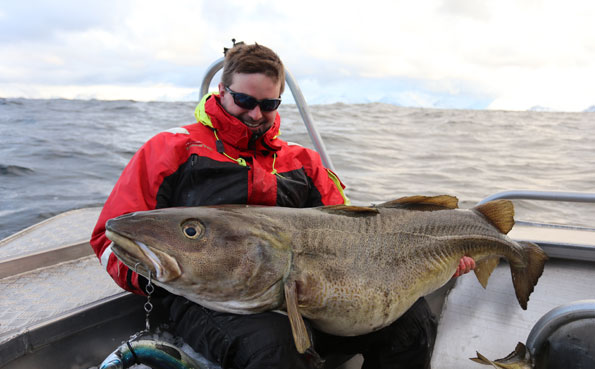 Well what can i say…….35 kilo’s of Soroya magic. Well done Ian 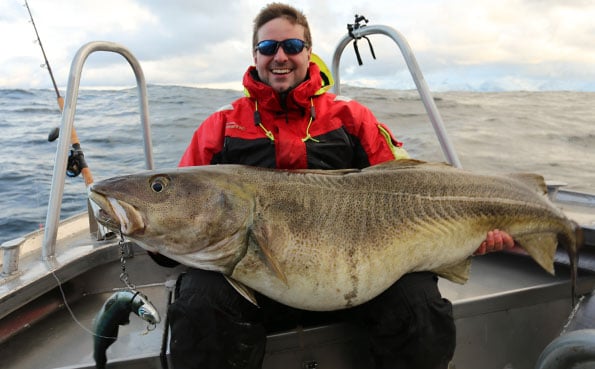 Just look at the length and girth of this fish, it almost looks unreal 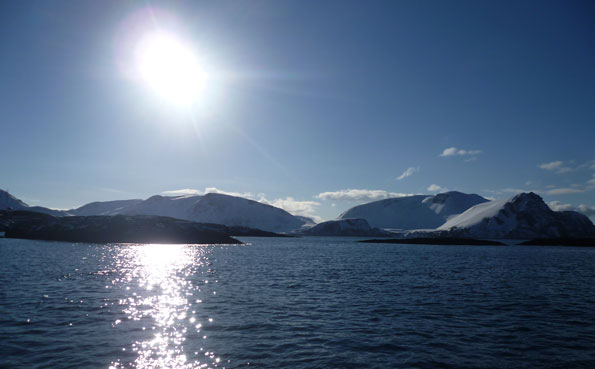 Early evening and the weather looked to be ok until……

So I sat there looked at the weather forecast for the following day and finished my Fishing Report Norway my heart sank as it looked like we may not get out as the winds were picking up gradually during the night and were expected to be around 12mtrs a second, which is not good, but that is Soroya….. 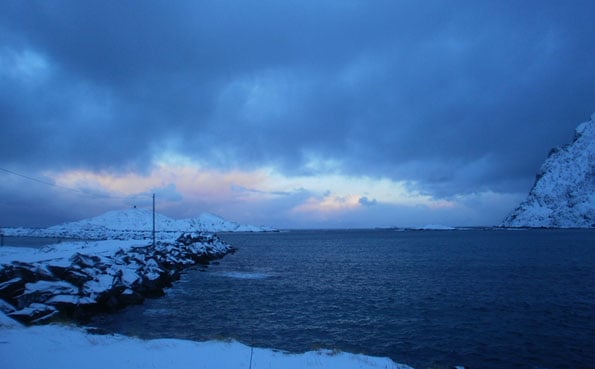 As I drifted off to sleep I prayed to the fishing gods to help us with the weather tomorrow and to be as good as today, well here’s hoping……

When it comes to having amazing weeks on the water, nothing we have ever posted from Havoysund has come close to this… This week we saw PB’s all round, NSA records beaten with over 120...
Read More >
Great end to a week in Vesterålen! – Vesterålen Fishing Report

Vesterålen has been getting some interesting weather over the last few days with almost all 4 seasons rolled into each day! This didn’t stop the guests from getting out on the water and landing some...
Read More >
Terminator Jr takes over Å! – Å Fishing Report

This week saw an increase in winds but that didn’t stop the guests from landing some fantastic fish including good Halibut, Cod and Coalfish in the boat! Terminator Jr takes over Å! This week we...
Read More >
Stay in Touch
Sign Up To Our Newsletter
Sign up to our weekly newsletter to get the latest travel advice, offers and adventures.
Sign Up Now
Request A Brochure
Our inspiring, free brochure is packed with incredible travel inspiration from every corner of the planet.
Request Now
Submit An Enquiry
Our experienced team are always on hand to help you with any questions or advice you need.
Enquire Now