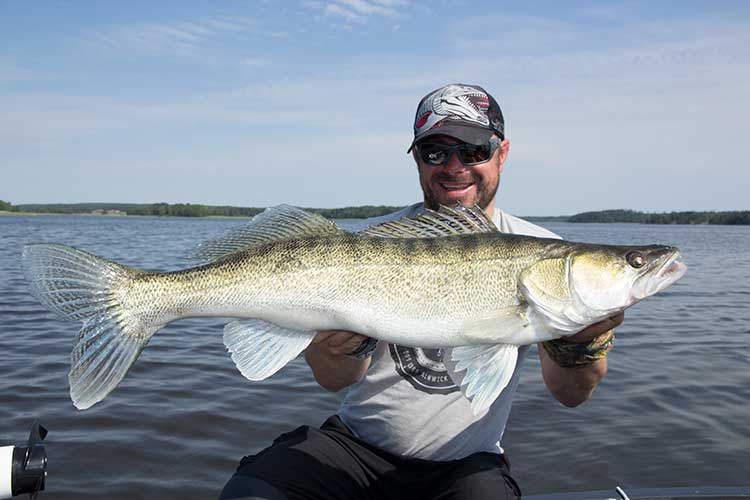 Description: The Zander is a broad-shouldered, deep-bellied fish with tapered body and a sharp pointed head. It is very recognisable by its spikey dorsal fin and is sometimes wrongly thought of as a Pike, Perch hybrid. Zander have a relatively small mouth with two large fangs at the front, these fangs are designed to puncture and hold their prey until it becomes weak enough to turn and swallow. The typical colours of a Zander are silver/white belly with a green and black striped back.

Average Size: From a sportfishing point of view Zander start to become interesting to the angler from about 3lb+. At this size they are still in their year class school and many small fish can be taken per session. Larger fish tend to be in much smaller groups, specimen anglers generally are searching for fish of 10lb + with a lucky few making captures of colossal fish in the 20lb+ category.

Where to find them: Zander are now present in virtually all of Europe with healthy stocks of fish in lakes and rivers alike. For anglers in search of big Zander then it is the continent that provides the most realistic chances.

Lake Maggiore: This gigantic lake is more like a sea than a lake, it spans between Switzerland and Italy and has been famed for its large Zeds for years. Being such a large sheet of water does however make it a pretty daunting place for overseas anglers to take on and getting information from the locals is like getting blood from a stone.

Lake Sibbo: This Swedish gem has got a serious pedigree when it comes to predator fishing. Known throughout Europe for its monster Baltic Pike, it has built up quite a following from the European predator Scene. In recent years the emphasis has changed from not just big Pike but now potential world record Zander. These fish are thriving in the slightly brackish waters of the Baltic Lake. One of the things that makes Lake Sibbo such a prolific big Zed water is that the 800 acre water is completely private and this allows for the fishing pressure to become regulated.

River Po: Italy’s Longest river is home to some monster fish of all species, and the Zander are no exception with record sized fish reported most years. Like Lake Maggiore due to its size the Po can be exceptionally tough water to fish but as captures show the results can be spectacular.

Fishing Methods: Lure fishing does seem to be the most popular method of targeting Zander. Tactics such as drop shot, vertical sharpshooting and jigging being some of the best for big fish. Fly fishing for Zander has erupted in modern times with anglers getting the fly down to the fish with fast sinking lines and catching some lovely fish. The old favourite for Zander is using natural baits either tight to the bottom or drifted under a float.

Things To Do In And Around Chilliwack

When visiting Chilliwack in Canada you may wish to venture out and experience some non-fishing activities and this place has lots on offer. So why not set aside a couple of days of your holiday...
Continue reading