Fishing From Nosy Be

Madagascar is an island country situated off East Africa’s coast in the Indian Ocean; it’s the second-largest island country in the world and the world’s 47th largest country. The mainland and peripheral islands cover a landmass of 592,800 square kilometres. One of the largest of the peripheral islands is Nosy Be, which is also Madagascar’s most famous and busiest tourist resort, not just for those sightseeing and soaking up rays, but for the saltwater anglers all around the globe.

The island of Nosy Be, situated in the remote ocean to the northwest,
its eight kilometres from Madagascar’s coast in the Mozambique Channel. The warm water channel is a combination of reefs, banks, and drop-offs and depths reach an incredible 3,292m. It’s a haven for large numbers of pelagic and reef fish, and the rich waters attract returning anglers year after year.

Popper, Lure and Jig fishing are the most popular methods in this sportfishing paradise. Hard fighting Giant Trevally, Grouper, Amberjack, Sailfish, Dogtooth Tuna, King Mackerel are just a few exciting species you can expect to catch.

As well as the rich wildlife below the water, the same can be said above the water. The biodiversity is immense, with roughly 200,000 known species like lemurs, chameleons, frogs and birds, of which 150,000 are endemic. 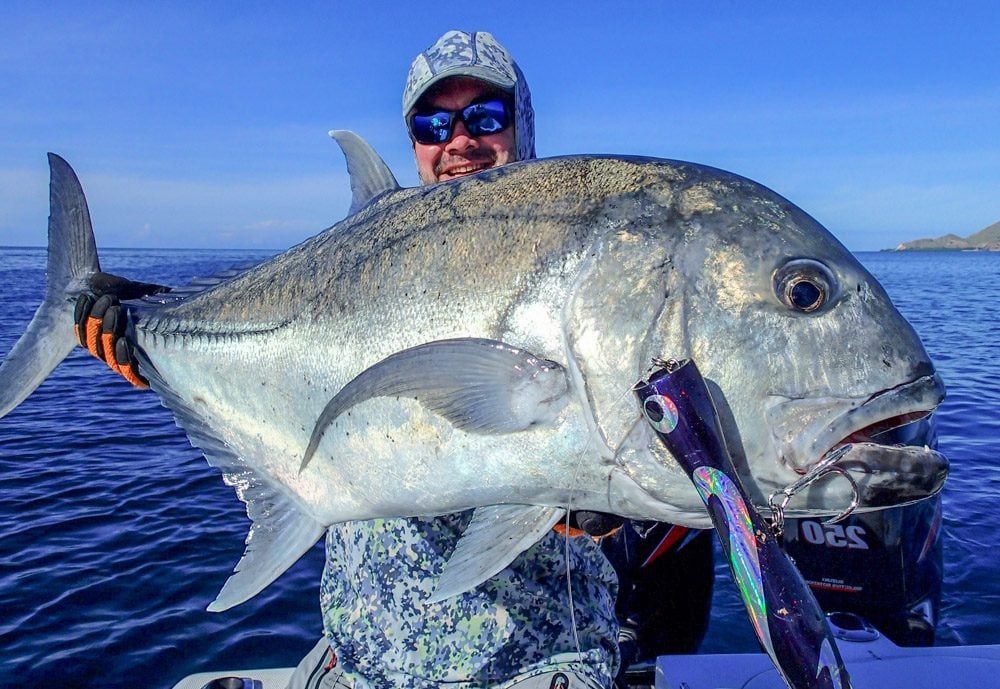 "I recently spent a week fishing in Madagascar with Nirvana Fishing. I can highly recommend them during! Over the week I witnessed them to be a highly professional fishing company. The boat was top class. The service was second to none and overall a very enjoyable fishing trip. So much so I have rebooked for next year. Cheers guys!"

"I want to thank you for a great fishing trip, It was a pleasure to fish on your boat with all of you. You have all great experience of Big Game Fishing and you really made my day It was an awsome fight with the Big Eye Tuna, weight 141 kg I want to recommend you to everybody who loves fishing See you soon"

"Great trip with Big GT”s on the surface, a lot of fish jigging, great crew both on the fishing boat, and the catamaran.best damn food ever, every night and lunch. no doubt in my mind that I will be back in 2019" 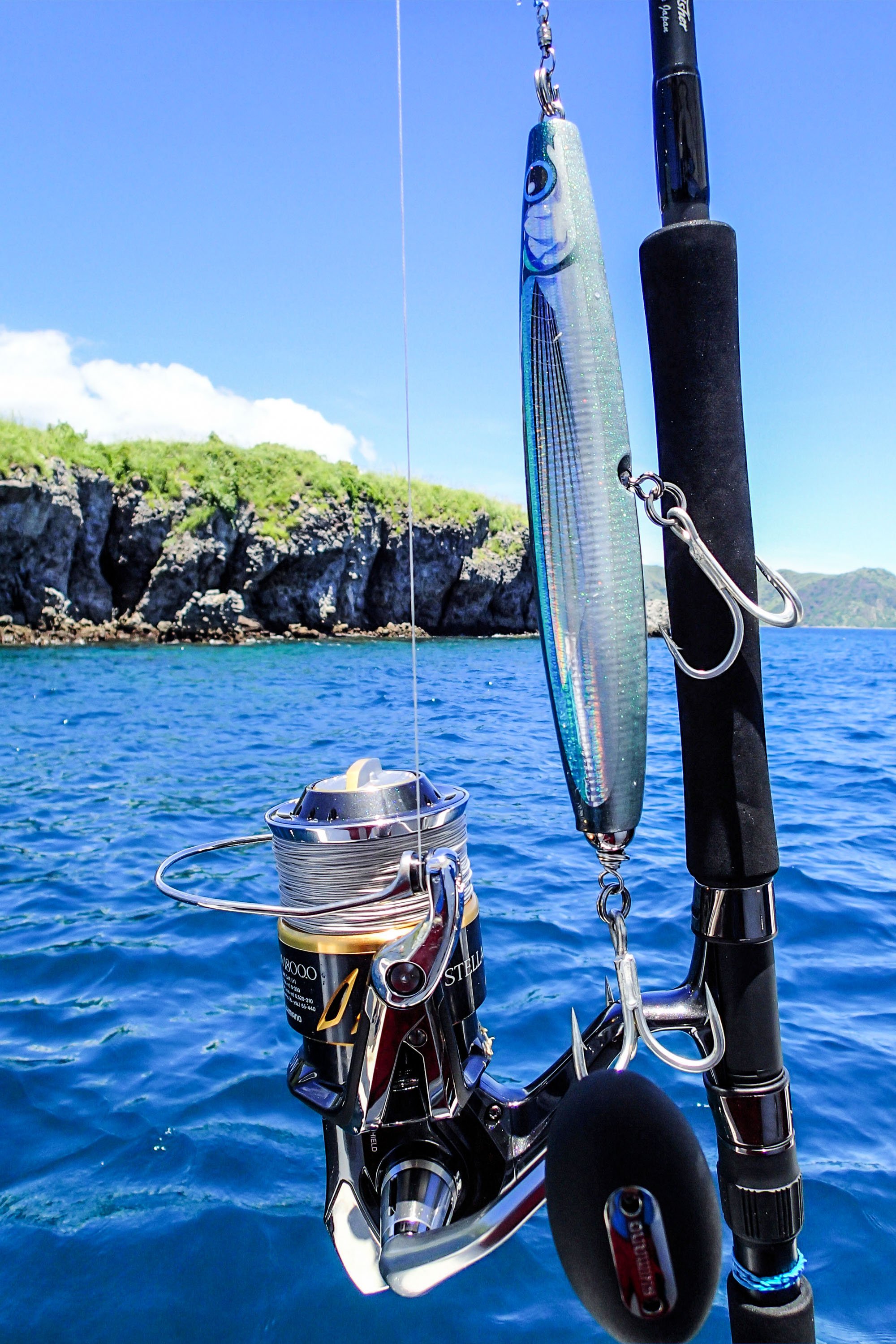 What Should I Expect From The Fishing?

Without a doubt, Madagascar is one of the top fishing destinations in the world. The main island and archipelagos provide a vast array of saltwater fishing opportunities for all manner of different species.

The favoured methods are popper fishing and jigging, exploring the range of bays, headlands, rocky outcrops, and remote islands. The beauty of the location, combined with the unbelievable fishing, make it like nowhere else on earth.

If you’ve never popper fished before, why not read our blog on the top ten tips for successful Popper Fishing.

Madagascar fishing trips will see you fishing from a fast and sleek sportfishing boat and staying on board one of our modern and stylish Catamarans. This means you waste very little time motoring too and from the fishing spots, with many of the best areas only 30 mins from the liveaboard boat.

What Species Can You Catch?

The number one fish species in Madagascar is, without doubt, the Giant Trevally or GT, as it’s known. These super-strong, impressive predators are a favourite amongst jigging and popper anglers from all over the world. There’s no doubting that Madagascar offers you one of the best opportunities to catch a giant.

Next on the list is probably the Dogtooth Tuna; these beautiful fish are spectacular to catch because they put up such an excellent account for themselves. Slightly smaller then the Big Eye or Bluefin Tuna, they are distinguished by their speed and strength.

Marlin and Sailfish can also be caught, with many calling the warm waters of the Indian Ocean home. As well as this, Madagascar is home to most of the oceans most formidable predators, with other species such as Amberjack, Barracuda, Tuna, a range of Jacks, Snapper and Grouper all willing to smash anglers baits or lures.

Is The Fishing Physically Demanding?

Popper fishing and speed jigging are the most popular and explosive ways to fish on Madagascar fishing trips, standing toe to toe and battling it out with your quarry. However, casting heavy poppers or frantically jigging speed jigs can be demanding and strenuous and will undoubtedly cause a few aches and pains at the end of each day.

If you prefer something a little more relaxed, then you can troll lures and fight your fish from the comfort of a chair.

Madagascar has a tropical climate and weather, governed by the moisture-bearing Southeast Trade and Northwest Monsoon winds. The country has a rainy season from November to March and then a dry season from April to October. As is typical with tropical area’s, the rain usually occurs in the form of thunderstorms.

During the dry season, average temperatures range from a minimum of 16c to a maximum of around 29c.

In general, Madagascar fishing trips are good all year round, except January, February and early March. These months fall in with the tropical depression and rainy season, and the fishing can be challenging. Usually, the fishing season runs from March 15th to January 15th, with a peak between April and July, depending on what you’d like to catch.

The best time for the Giant Trevally’s is late March and April. The water temperatures are cooler, and the fish start hunting for food in the shallower waters, a perfect time to target them using poppers.

April and July is the peak season for Sailfish and Marlin and is a beautiful time to visit, as the country and wildlife wake up and emerge from the winter months and rainy season.

How Do You Get There?

The best way to get to your Madagascar fishing trip from the UK is to fly into Addis Abba airport. From here, you will catch a connecting flight to Nosy Be before being transferred by speedboat to your catamaran. Your catamaran will then transport you to the fishing grounds that you will be staying in and around. 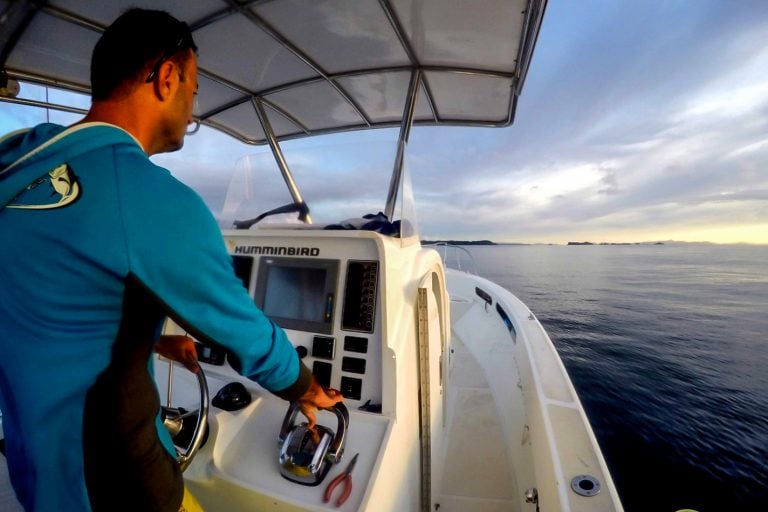 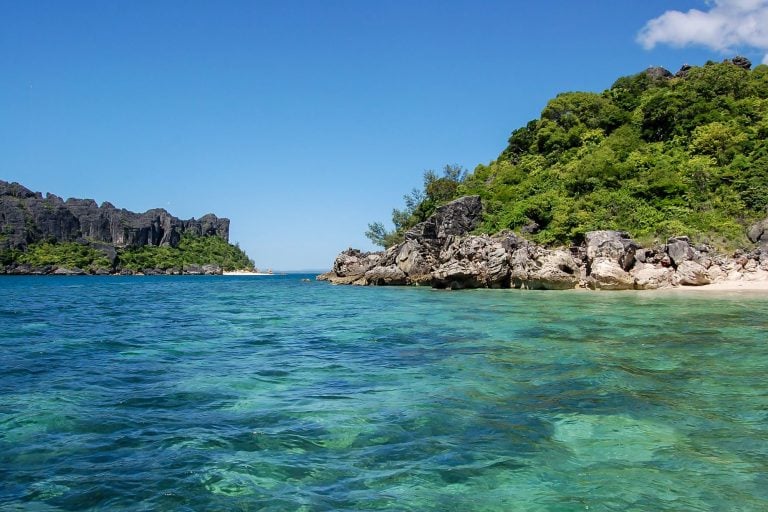 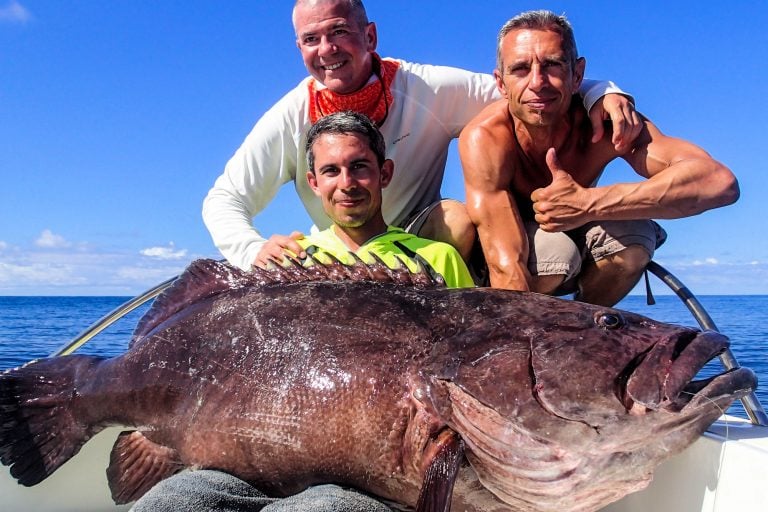 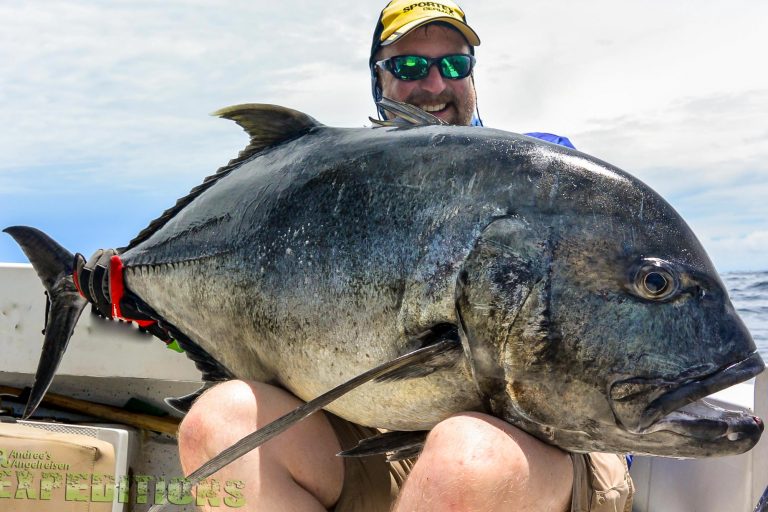 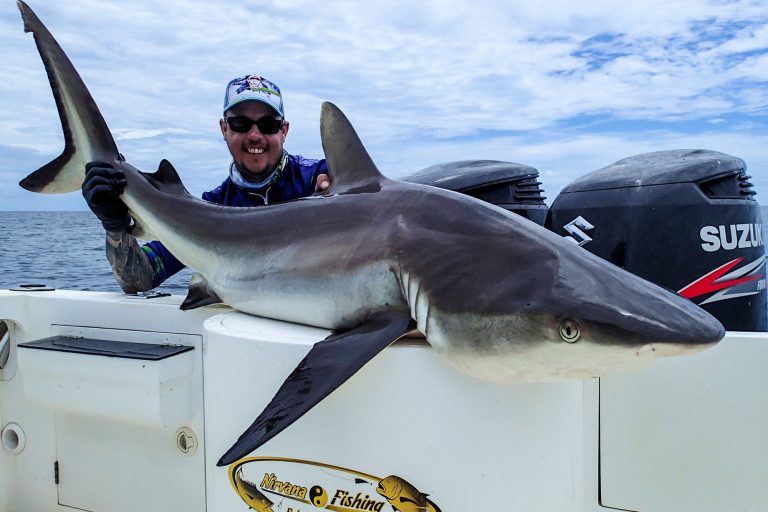 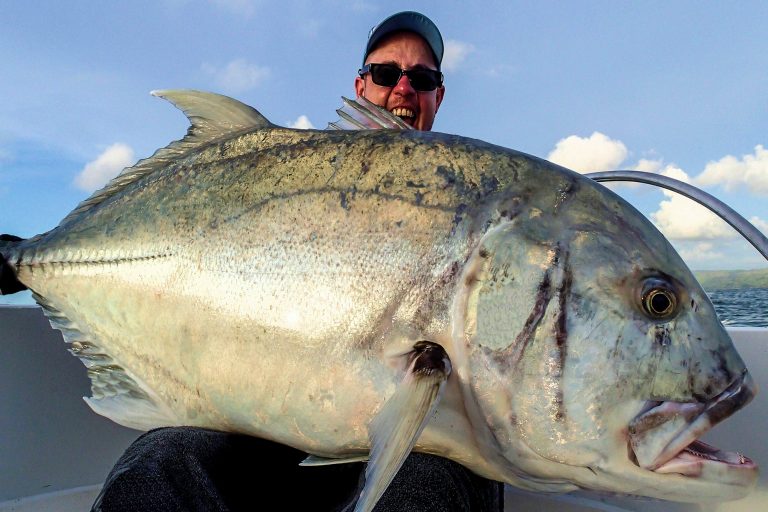 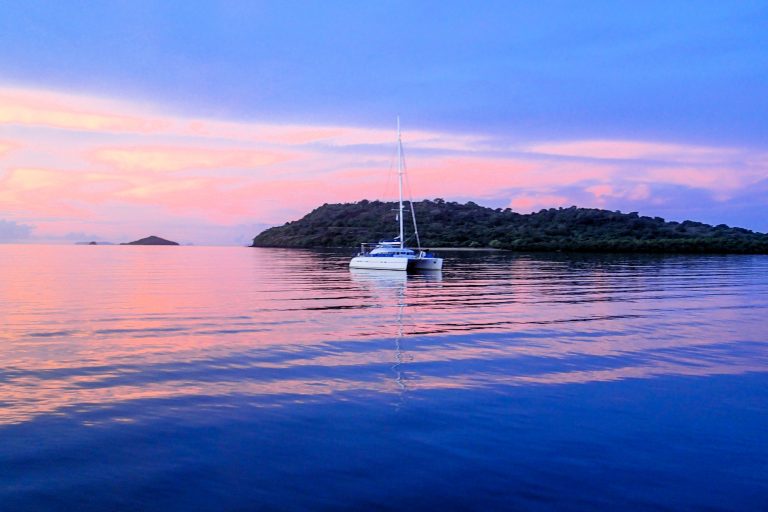 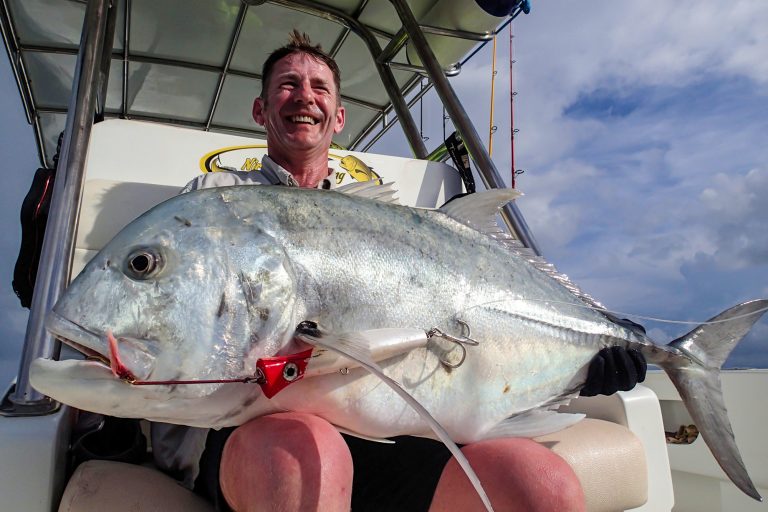 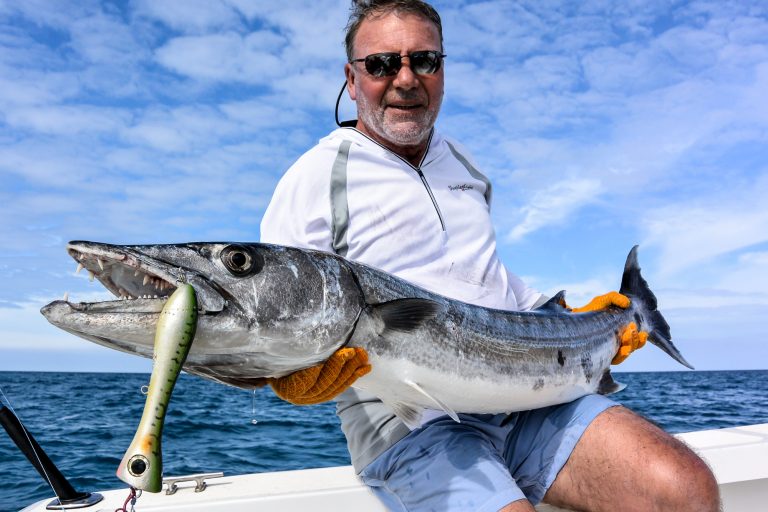