Honduras is a country in Central America that shares land borders with Guatemala, El Salvador, Nicaragua and ocean borders with the South Pacific and the Caribbean Sea. It spans an area of 112,492 square kilometres and is renowned for its rich natural resources, including minerals, coffee, tropical fruit, and sugar cane. It’s a country with varied topography and features numerous mountain ranges, narrow plains and undeveloped lowland jungle. Its coastline spans a combined length of 823 kilometres, with 163 kilometres in the south of the country bordering the Pacific and 669 kilometres in the north, bordering the Caribbean sea. The rich, tropical waters of the Caribbean are the main draw for travelling rods and attract thousands of saltwater fly fishing anglers and blue water big game anglers from all around the globe every year.

Just off the northern part of the Honduran coastline, between 15 and 60 kilometres offshore, there are The Bay Islands, a group of eight islands and 53 small cays belonging to the mainland. The largest of which are Utila, Roatan, and Guanaja. These islands offer some of the best fishing and diving opportunities not just in Honduras but in the world. Roatan, probably the most popular, is also located near the Mesoamerican Barrier Reef, the largest barrier reef in the Caribbean Sea and the second largest worldwide after Australia’s Great Barrier Reef. 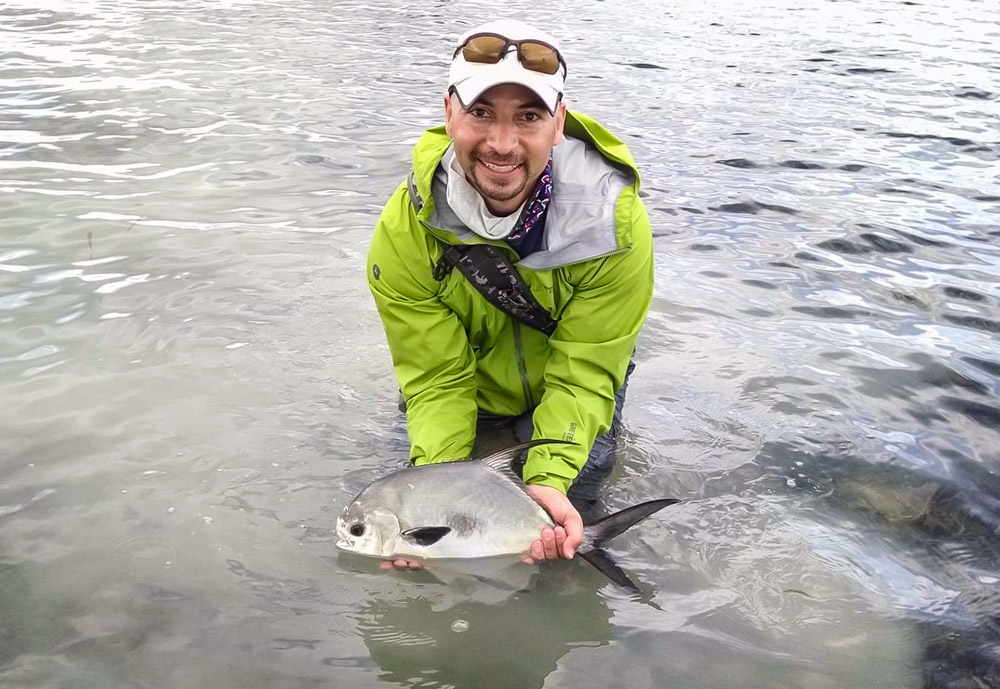 Fly fishing is the emphasis of Mango Creek Lodge’s fishing operation, and the Lodge is Roatan’s premier saltwater fishery, presenting the opportunities for travelling rods to hook up with a coveted ‘Grand Slam’. Located in secluded Port Royal on Roatan’s East End, it’s just a stone’s throw away from some of the islands most productive flats.

"Combining fishing and a trip suitable for my partner isn't always easy, but Mango Creek ticked every box. I landed some nice Bonefish and Permit and although the fish were quite spooky, we landed fish on every session, nothing big but it was good fun. My partner loved all the facilities and found it ultra-relaxing - we'd definitely love to return one day."

"Excellent and unique over the water accommodations, wonderful food and very good fishing for Bonefish and Permit. The local fishing guide was very knowledgeable and all the staff, especially Tita and Manny were exceptionally welcoming and couldn't do enough for us. Thanks to everyone involved in making our trip happen."

"My wife and I spent a week at MC and had a very nice time overall. The staff was all very friendly and tried to be helpful. It's a very laid back place, so sometimes we had to go find someone if we needed something, they were always happy to help. There were more Bonefish around than I had expected and throughout the week we landed some nice fish. Would definitely love to visit again soon." 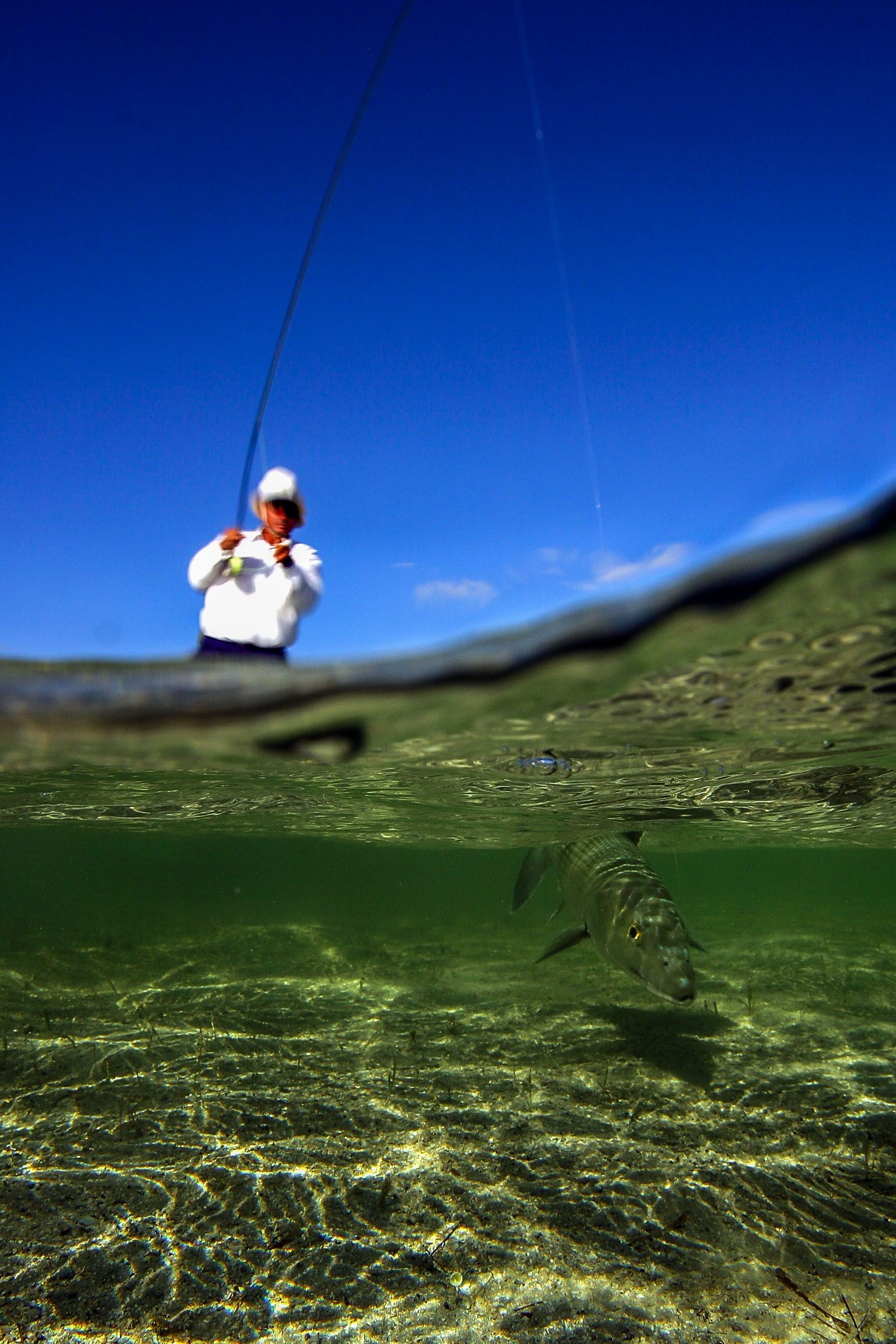 The Island of Roatán is one of the beautiful Bay Islands off the northern coastline of Honduras, situated in the Caribbean Sea approximately 65 kilometres off its mainland. Measuring just 77 kilometres long and less than 8 kilometres across its widest point, it rests on an exposed ancient coral reef and is unspoilt by development. As a result, it’s a true saltwater fly fishing paradise and a popular destination for travelling rods, divers and eco-tourists, and welcomes thousands of visitors every year.

The island’s coastline is a mixture of sandy beaches, mangroves, cays, flats and reef systems. The Mesoamerican Barrier Reef, the largest barrier reef in the Caribbean Sea and the second largest worldwide after Australia’s Great Barrier Reef, is famous amongst anglers and divers alike. Around the entire ocean border of Roatan, there is a wealth of angling opportunities for all manner of different saltwater species, either on the fly inshore or big game and blue water fishing offshore.

On the mainland coastline of Honduras, there’s a wealth of fishing opportunities, fishing both the Caribbean Sea in the north or the Pacific Ocean in the south. However, most travelling rods opt to fish the Bay Islands off its coastline, the island of Roatan being the most popular.

Surrounded by crystal clear waters and productive flats comprising hard sand, turtle grass and coral, Roatan offers some incredible saltwater fly fishing opportunities. One of the most famous fishing lodges on the island is Mango Creek, voted one of the seven most romantic vacation spots globally by GORP Travel, Outside Magazine. Located in secluded Port Royal on Roatan’s East End, it’s just a stone’s throw away from some of the islands most productive fishing spots. The famed ‘Breakfast Flats’ are visible from the Lodges front door, just a short sixty-second boat ride or ten-minute kayak paddle away.

What Species Can You Catch

Anglers fishing in Honduras can expect a wide range of saltwater species. However, Bonefish, Permit, and Tarpon are the primary targets. As a country, it offers travelling saltwater fly fishing anglers an excellent chance of hooking up with a coveted ‘Grand Slam’.

As well as the typical flat species, there’s a vast array of other fish willing to take a well-presented fly, lure or bait. Barracuda, Jacks, Snapper, Grouper and Queen Triggerfish all inhabit the saltwater in and around the island and can offer a fantastic day of mixed fishing.

As well as being known as a premier saltwater fly fishing destination, Honduras is also famed for its wide range of non-angling activities.

The Bay Island of Roatan is consistently rated as one of the top Caribbean dive destinations and is located within the largest coral reef in the eastern hemisphere. There is an abundance of beautiful dive sites situated within minutes of its shores.

With its mountainous terrain, narrow plains, undeveloped lowland jungle, and a vast array of wildlife, flora and fauna, Honduras is the perfect country for an eco-adventure and Hiking, Kayaking, and Snorkeling are all incredibly popular.

It’s possible to catch the ‘big three’ flats species (Bonefish, Permit, and Tarpon) all year round; however, each does have a peak window, apart from the Bonefish, which are abundant throughout the season.

February to July will give you the best chance of a Permit. Although the fishing can be good all year round, the most significant numbers of fish turn up between February and July. This is because their spawning season runs between March and April, and these months see them at their most aggressive and willing to take a fly.

October to January is best for the Tarpon, although they are present all year round like the Bonefish. November, the usual start of the rainy season, can often be the most productive.

The most direct route from the UK to the fly fishing resorts in Honduras is through the states, typically landing and overnighting in Miami. The following day it’s a direct flight from Miami to Honduras, where the lodges’ staff will transfer you the rest of the way. 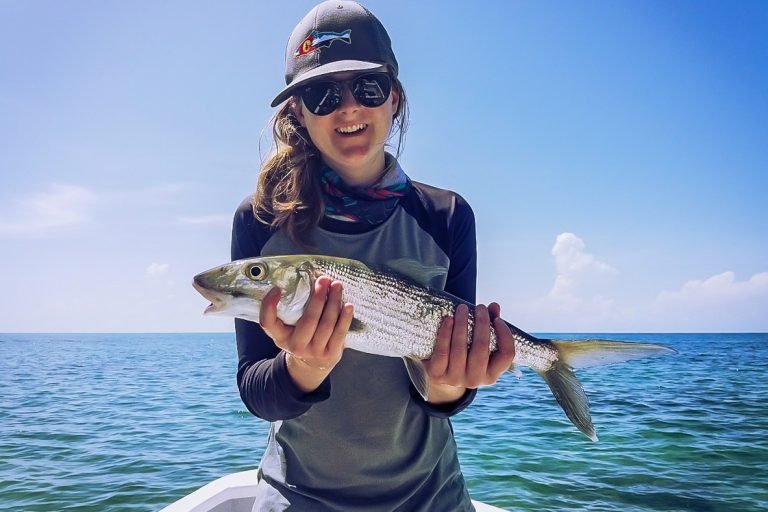 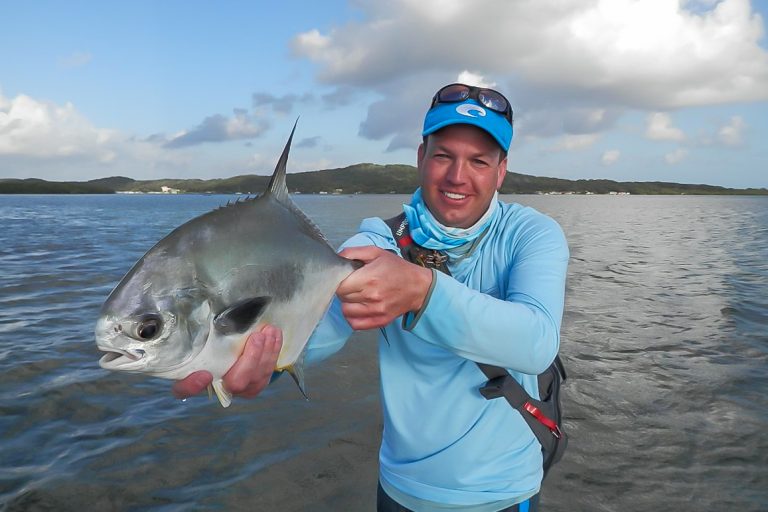 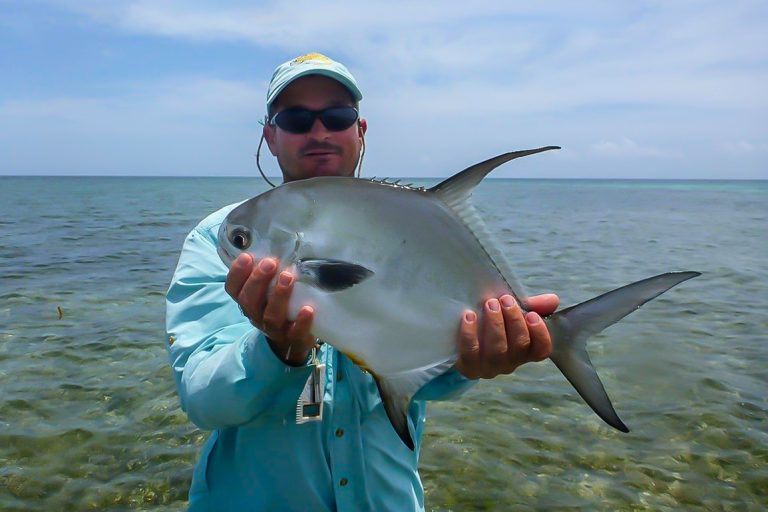 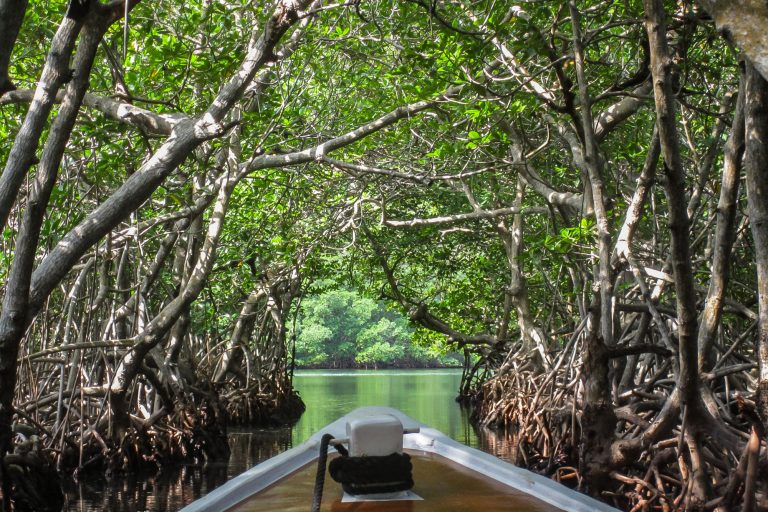 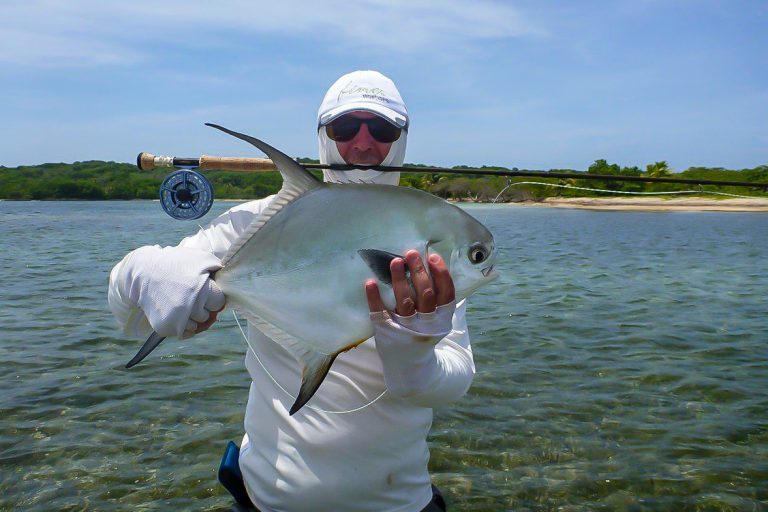 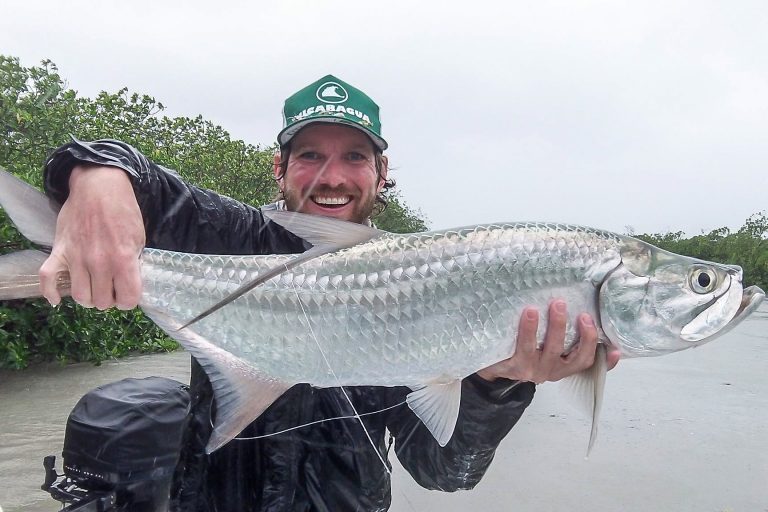 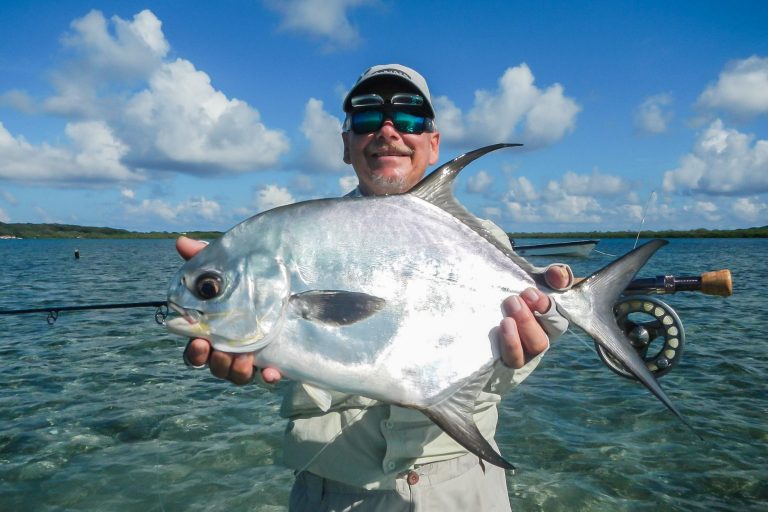 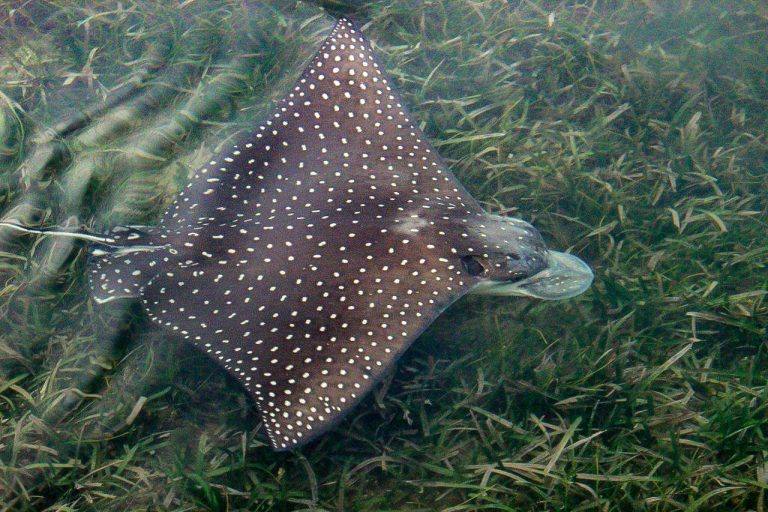 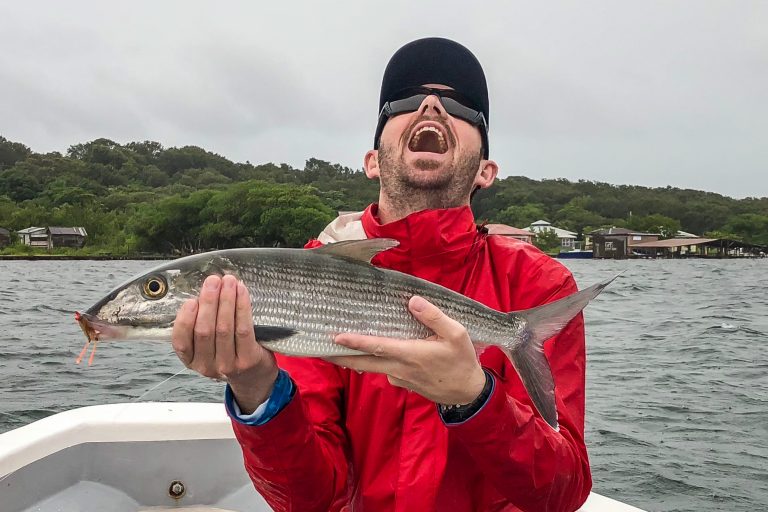