Russia is the largest country globally and spans Eastern Europe and Northern Asia, covering over 17 million square kilometres or one-eighth of the Earth’s inhabited land area. Its topography is vast and varied, with broad plains and low hills to the west, swathes of coniferous forests and tundra to the east and an array of mountain ranges and uplands to the south. Russia features the world’s fourth-longest coastline, at 37,653 kilometres and is home to over 100,000 rivers. Its lakes also contain approximately one-quarter of the world’s freshwater. With such an extensive landscape and diverse range of waterways, it’s no surprise that Russia is gradually becoming more and more popular amongst travelling rods, especially those in the freshwater fly fishing community.

The Kola Penninsula in the extreme northwest of the country is one of the largest peninsulas in Europe and one of the worlds last Atlantic Salmon strongholds. It’s home to numerous small, fast-moving rivers and rapids; some of the most famous include the Kharlovka, Rynda, Zolotaya, Litza, Varzuga, Pana, Kitza, Belousiha and Voronya, to name a few. These waterways are renowned for Atlantic Salmon fishing and produce good numbers of immaculate specimen-sized fish each and every season. Purely a natural resource, with no stocking programmes and no desperate measures needed to save the future, it’s an area of true wilderness and one where your freshwater fly fishing dreams can come true. It’s easy to see why Russia is now a destination at the top of many fly anglers bucket lists. 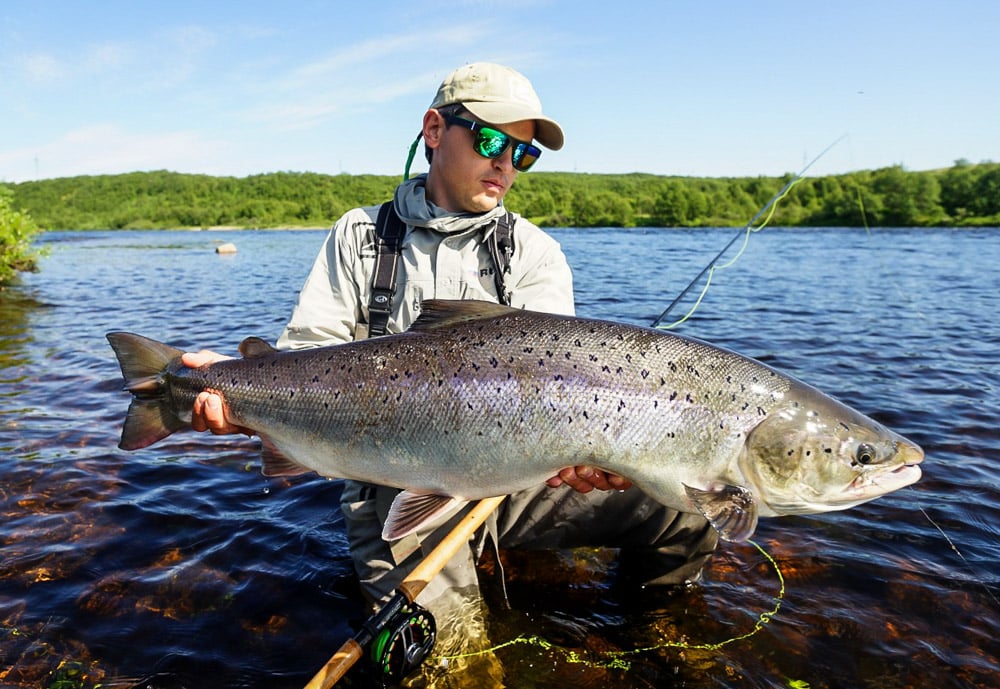 The Belousiha River is one of the most famous Salmon rivers in Russia and one which is well known and regarded amongst adventurous travelling freshwater fly fishing anglers. Located in the extreme northwest of Russia on the Kola Peninsula, one of the largest Peninsula's in Europe, it's a relatively small but exquisite looking river set amidst spectacular and changing scenery.

"I'd heard that Russia was an up and coming destination for fly anglers chasing Salmon and after previously visiting both Norway and Iceland I thought I'd try it for myself - and I'm glad I did. I had the most wonderful time. Thank you to all involved in organising it for me."

"A beautiful setting with an abundance of different water and beats to fish. My week was extremely productive and the fish were well on the feed, I was lucky enough to land Salmon and Sea Trout. I'd have no hesitation in recommending this tour."

"I've been lucky enough to catch Salmon in a few destinations around the world, but my trip to Russia has to be one of the best. The fishing was fantastic and the lodge, guides and staff were brilliant." 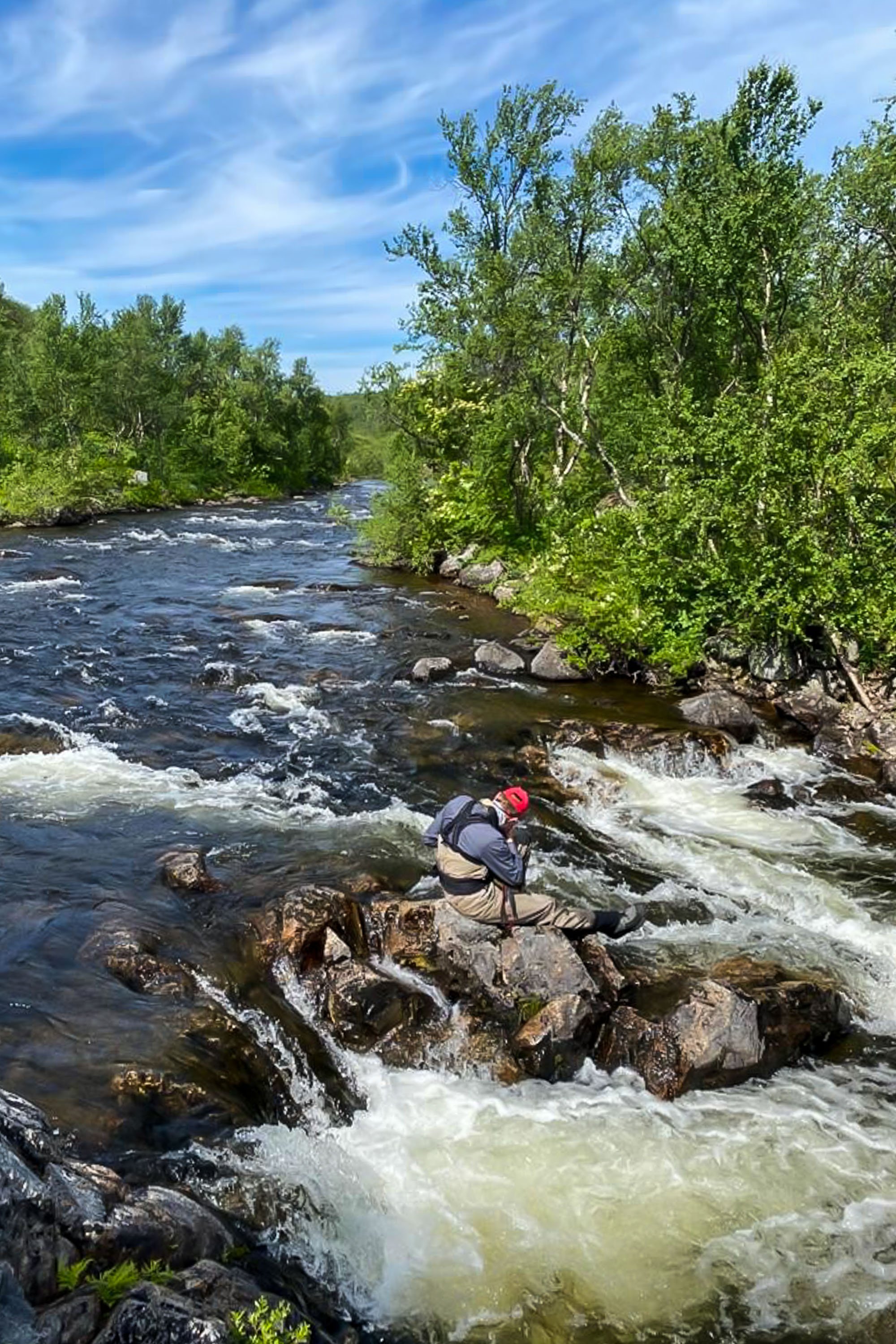 The Kola Peninsula is probably the most famous region in Russia for Atlantic Salmon fishing. The monotony of its barren tundra, once explored, gives way to some of the best Atlantic Salmon waterways found anywhere in the world. With rivers varying in both size, water flow and appearance, it offers travelling freshwater fly fishing anglers the chance to experience some of the most memorable fly fishing on the planet.

Some of the most important rivers in the region include the Ponoy, the Varzuga, the Umba, the Teriberka, the Voronya, and the Yokanga. Most of which originate from lakes and swamps and collect their waters from melting snow.

The Best Salmon Rivers In Russia

There are many famous Salmon rivers in Russia. The likes of the Zolotaya, Varzuga, Pana, Kitza and Belousiha River all regularly appear on the bucket lists of many freshwater fly fishing anglers. A few more very popular rivers include:

Many anglers have often described Russia’s East Litza River as the best Salmon river in the world. The Litza has a series of magical pools that are long, deep and boulder-strewn, creating the perfect habitat for some colossal salmon. Despite the impressive length of the river, Salmon get caught on a 9-kilometre stretch that ends at the stunningly beautiful Litza waterfall. The Litza has produced Salmon to over 45lb, and in one season, nearly 50 fish over 30lb were landed, with over 20% of the fish being over 20lb.

The mighty Kharlovka is one of the most famous rivers in the world for large Atlantic Salmon and provides some exciting double bank fishing. The river features a large waterfall, located 10 kilometres from the Barents Sea, which acts as a barrier and stacks the Salmon up in most of the 23 pools situated below it. There are more pools above the falls, which can produce some exciting results, especially during the autumn weeks. The Kharlovka has produced Salmon to over 40lb, and in one season, nearly 50 fish over 30lb were landed, with over 20% of the fish being over 20lb.

The Rynda and Zolotaya rivers flow through more moderate landscapes than the Kharlovka and Litza and anglers fishing this waterway have to read the water and think carefully about each cast. There are over 70 unique pools on the stretch, and each one requires a different approach. These waters are reminiscent of that of Iceland, and the two often get compared. On average, over 30% of the Salmon landed on the river are more significant than 12lb, and the largest ever caught was a fish of over 40lb. Anglers who fish the river average ten fish a week.

What Fish Species Can You Catch In Russia

Hundreds of freshwater fish species inhabit the rivers and lakes of Russia, from Minnows to Sturgeon to Roach and Carp. There are twenty-nine freshwater fish species in the Kola Peninsula alone, including Trout, Stickleback, Pike, and Perch. However, the rivers in this particular region are an essential habitat for Atlantic Salmon, with the fish returning from Greenland and the Faroe Islands spawning in the freshwater of the rivers. These migratory fish have helped create a world-class recreational fishery, and the region attracts thousands of anglers every year.

As well as Atlantic Salmon, many rivers are home to Sea Trout, Brown Trout and Grayling, all of which reach specimen proportions. There are also Pink Salmon, which can often provide great sport when the Atlantic Salmon are quiet.

The peak season in Russia will vary depending on the species of fish you’re fishing for, but for the Atlantic Salmon, the best weeks are between mid-June and early July. Spring can transcend into Summer quickly, and a rise in air and water temperature soon sees an increase in Salmon populations in the rivers.

Is The Fishing Physically Demanding

Salmon fishing in Russia isn’t too demanding on the body as the majority of the rivers get reached via car or quad bike. However, some of the more remote stretches get reached on foot, and some days it’s typical to cover 2 or 3 kilometres per day and sometimes even 5 or 6 kilometres depending on what areas you fish.

For freshwater fly fishing anglers, Russia is a straightforward destination to travel to, and its capital Moscow, where most connecting flights fly from, is only a four-hour flight away. Much of the Salmon fishing in Russia is remote, so internal flights from Moscow to smaller regional airports are common. The Kola Peninsula and Murmansk Airport are only a two and half hour flight away. 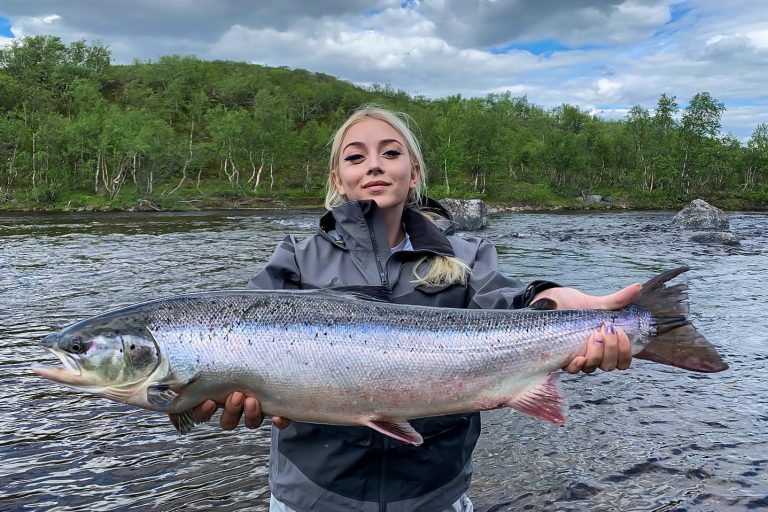 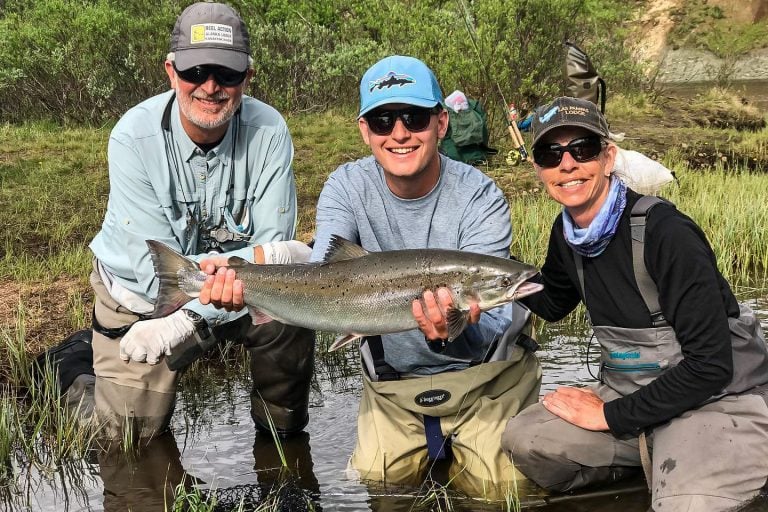 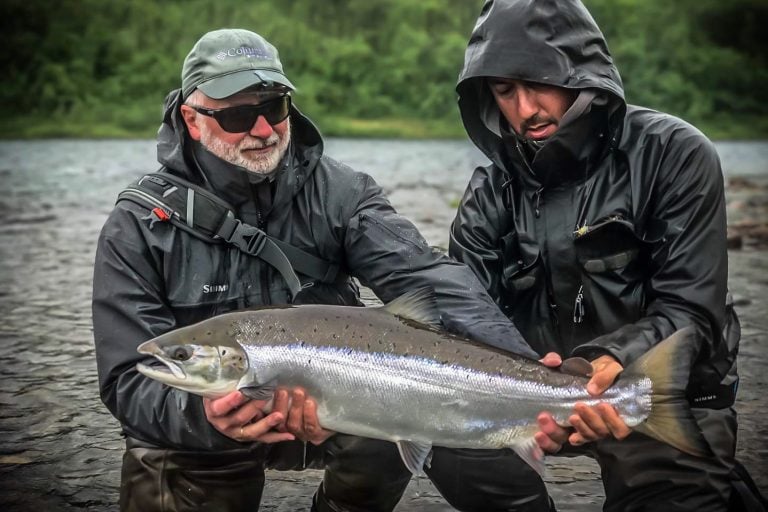 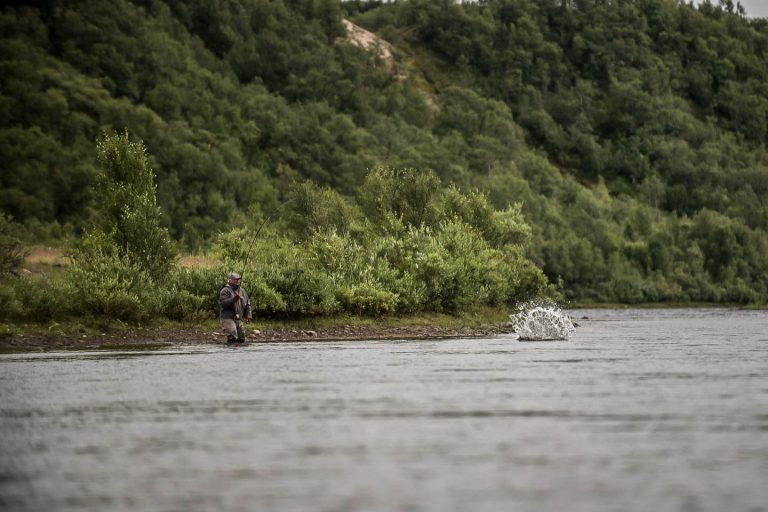 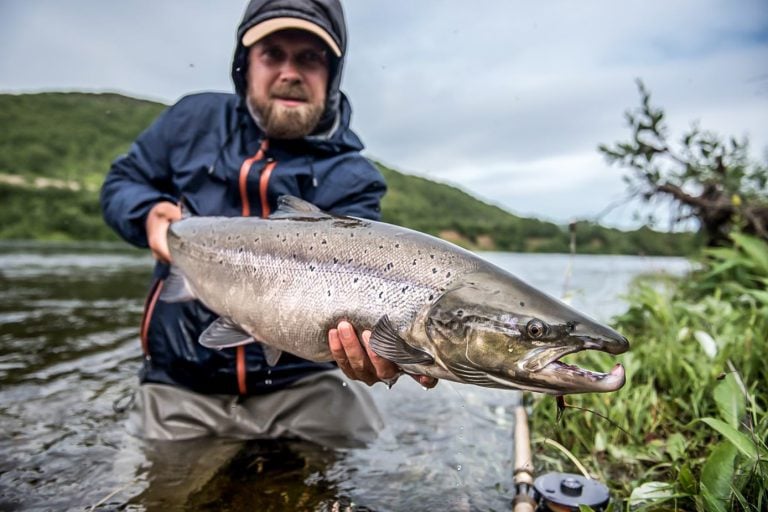 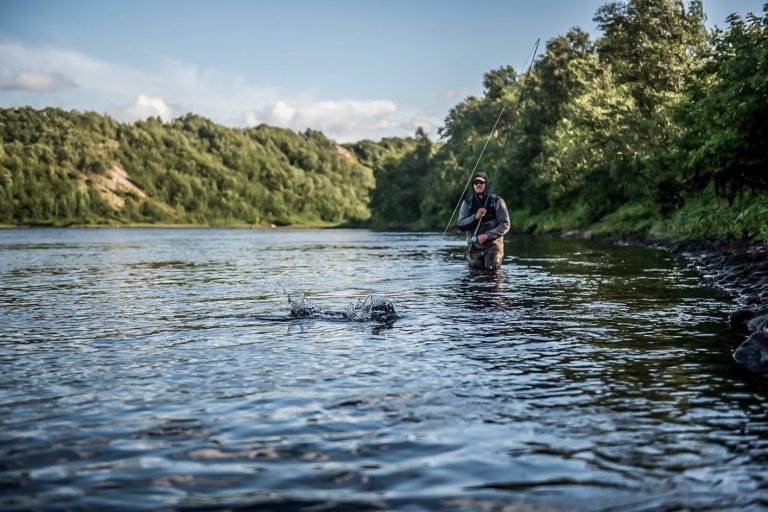 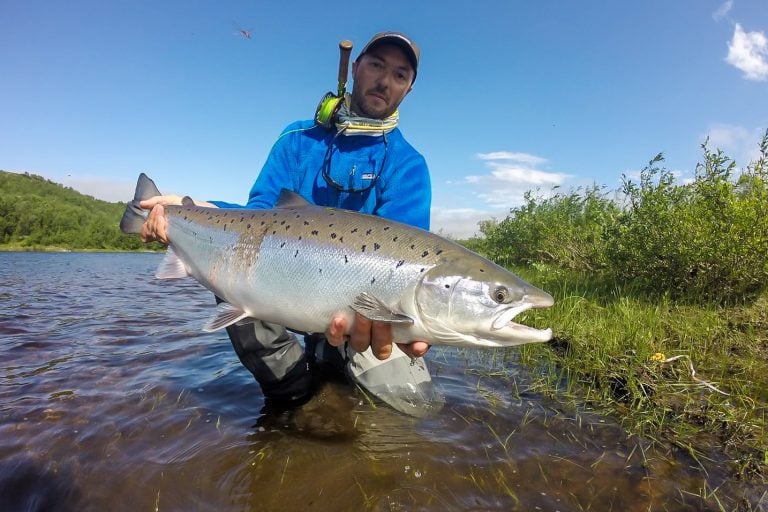 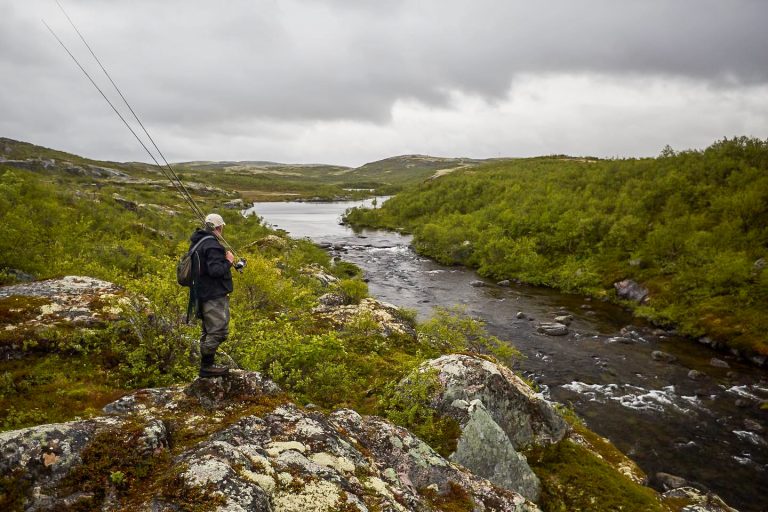 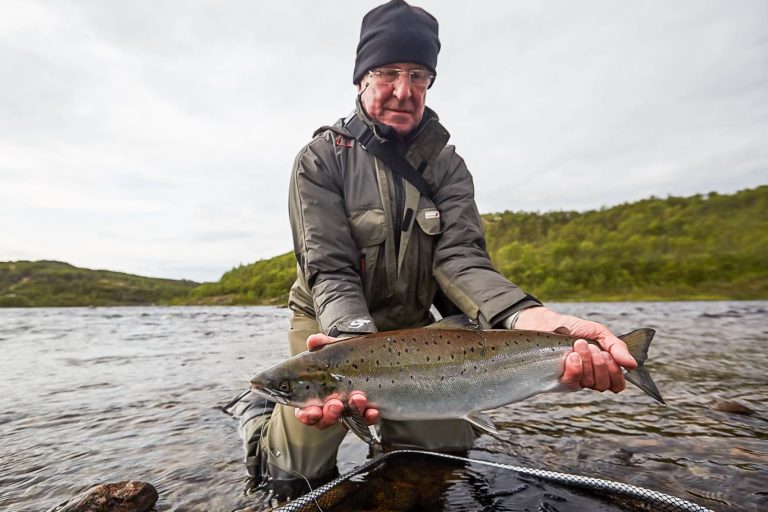