Maderia is an archipelago situated in the North Atlantic ocean, just under 400 kilometres to the north of the Canary Islands and 520 kilometres west of Morocco. Famous for glorious food, world-famous wine, and it’s easy-going, safe, friendly atmosphere, it’s one of Portugal’s best-kept secrets.

It consists of three main islands, two of which are inhabited. The islands formed at the top of a giant shield volcano and are a sub-tropical oasis of steep verdant cliffs rising out of the blue ocean.

It offers a coastline of around 90 kilometres and features some of the highest sea cliffs globally; the sea between the islands has an incredible depth of approximately 4000m, and just 5km from the coast, the sea reaches a depth of 3000m. Bathed by the Gulf Stream, the water around the islands does not drop below 18c. These things combined make it the perfect hunting grounds for giant Blue Marlin, which attracts thousands of travelling big game anglers every year.

It all started in the early 90s with word spreading like wildfire, amongst the big game fishing community, about the significant number of big Blue Marlin turning up in the summer months. Fishing around the islands’ rich waters has seen many IGFA line-class records broken, and Marlin over 1000lb get regularly caught. Many specimen anglers have boated and released their personal best blues on their fishing trip to Maderia. 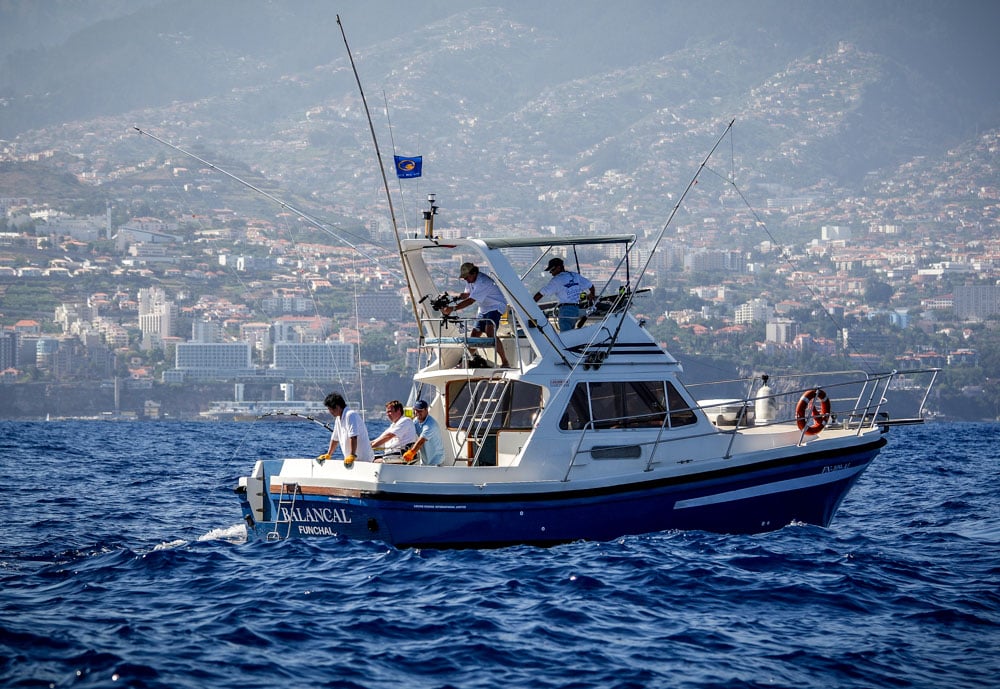 Madeira for many years has produced some of the worlds biggest Blue Marlin and back in 1995, 1996 and 1997 Madeira was the world cup winner. So, if you are a true specimen hunter, we can’t think of a better place to head to for a fish of a lifetime. Perfect for a family getaway with it only being a couple of hour’s flight.

"Well what can i say but a huge thank you for organising our 40th wedding anniversary. The flowers in the Hotel room were a real touch. Gary managed his Marlin i think he said it was around 600lb's which he has assured me is a big one The hotel staff were very warming and made us feel special. The Island itself is stunning a little steep in places but very picturesque many great restaurants Our warmest gratitude to all that was involved Mr and Mrs Taylor"

"Best moments - hooking a 900 lb Marlin!!!! Filmed and has appeared on your website & on youtube with 2000plus hits! Hotel Palheiro wonderful 5* hotel with 5* cuisine + service also offering golf on its own course as well as horse riding and free transport to & from Funchal from its 1500 feet above sea level."

"The hotel was lovely in every way. The staff and food were great and the weather was just perfect. Although the hotel is a 15 minute trip from downtown Funchal, the hotel has it's own courtesy bus which makes life easy. Although we are seasoned travellers we can't think that we have had better service from hotel staff anywhere. The fishing was good with my friend Colin catching an 80lb white marlin and I caught a 300lb blue marlin. All in all a fantastic trip." 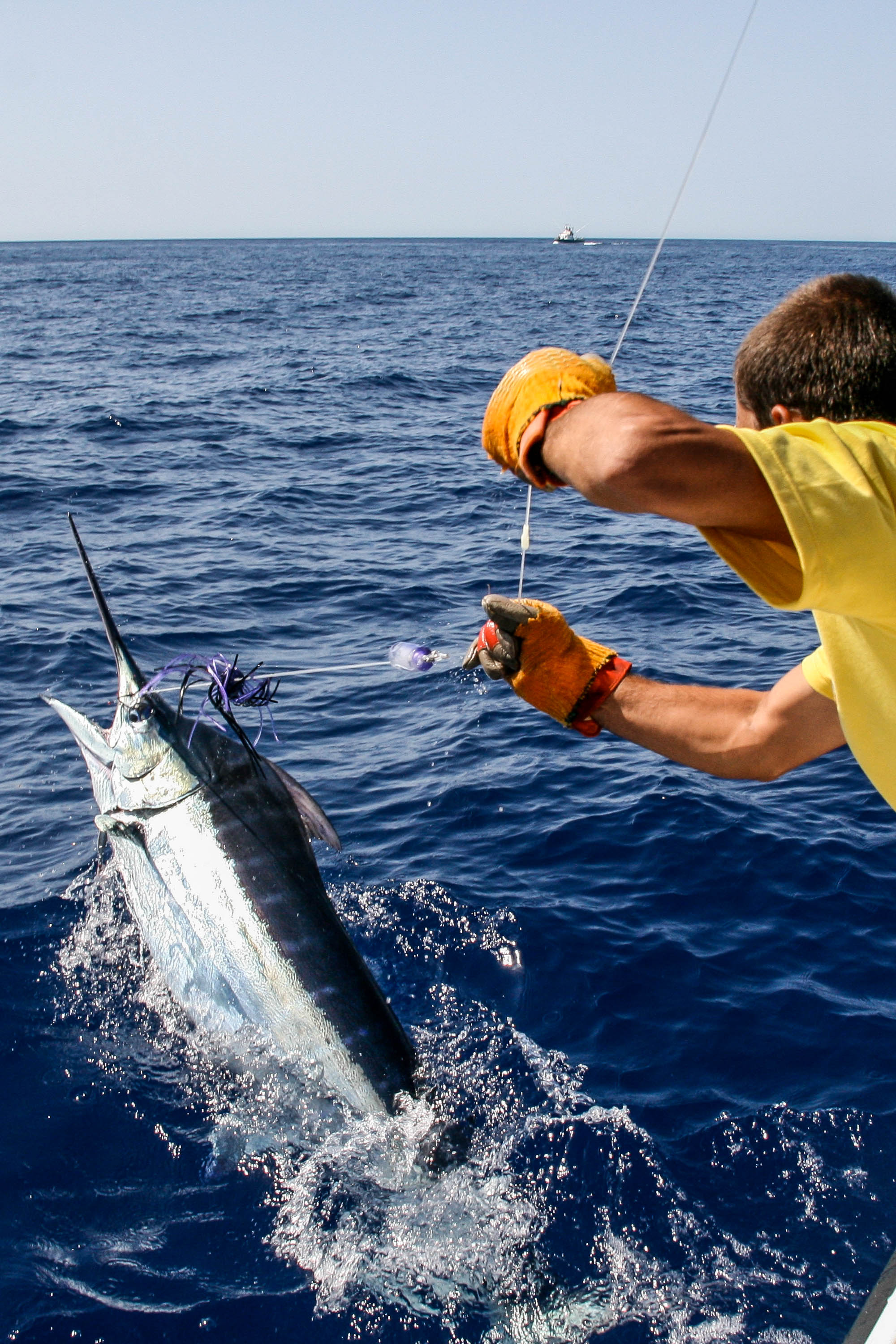 The mountains on the island influence the climate, which means there are various weather fluctuations on different parts, however in general, the environment is very mild, so much so that it is known as the island of eternal spring. On the coast, daytime temperatures hover around 19-20c from December to April and exceed 20c between May and November, reaching 26c in August and September.

Spring and autumn are probably most comfortable, and you’ll often enjoy up to nine hours of beautiful sunshine per day.

When Is The Peak Time For Maderia Fishing?

The season runs from April to November, peaking in June and July for the Billfish. It’s these summer months when the waters are at there warmest, the vast shoals of baitfish move closer to the coast, and the big Blue Marlin begin to run.

Whenever you decide to travel, we recommend looking at a moon phase calendar as often the time leading up to a ‘new moon’ can be most productive, as the large predators will feed more during the daylight than the night.

How Many Fish Can I Catch?

Maderia is a true ‘big fish’ destination and not one necessarily known for numbers. As with all saltwater fishing, the tides, weather and conditions play a massive role in catching. The Blue Marlin is respected and well known worldwide for its size, strength, and power and can exceed more than 1200lb. It could easily be days before you see a fish, but it could easily be a world record when you do it. It’s this what attracts anglers from all around the globe.

A Great Destination For Couples

Our resort in Maderia is the perfect destination for families and couples. The Casa Velha del Palheiro is a beautiful hotel located in the foothills of Funchal. The hotel, lovingly restored from an 18th-century hunting lodge, is now fully integrated into the 120 hectares Palheiro Nature Estate with its own par 72 championship golf course, a fully-serviced spa with indoor and outdoor pools, and over 20 kilometres of nature trails, birdwatching, restaurants, bars and even a tea house.

Things To Do On The Island

With Maderia set in the remote Atlantic Ocean and on the same latitude as North Africa, you’ll find many things you wouldn’t expect to find in a European region. The natural landscapes will make you gasp, and you don’t have to venture into the mountains to enjoy the natural abundance of plants and wildlife.

Popular tourist hotspots include Cabo Girão, a “skywalk” installed on a 580-metre-high cliff on Madeira’s south coast; it features glass floor tiles that give you a clear, dizzying view to the ocean far below.

Take a walk on the Levada dos 25 Fontes, a route that will take you past the marvellous 100-metre Risco Waterfall.

Funchal Cable Car, a modern cable car system, takes the route of an old steam railway line, whisking you up from Almirante Reis to Funchal’s upper suburb of Monte. Here you’ll have 15 minutes to soak up the views of the ocean and the terraced mountainsides clustered with white houses.

As well as Maderia fishing, it’s also famous for its fantastic diving opportunities. Not only does it offer some unbelievable water clarity, but some crazy average sea temperatures. The coldest the water will get is around 18c in winter, peaking around 24c in summer. The waters are far warmer in winter than much of Europe in summer.

One of the great things about Madeira fishing is the ease of getting there, as it’s a simple direct flight from the UK. Meaning you can enjoy a big game fishing experience with just a short-haul flight of only 3.5 hours. 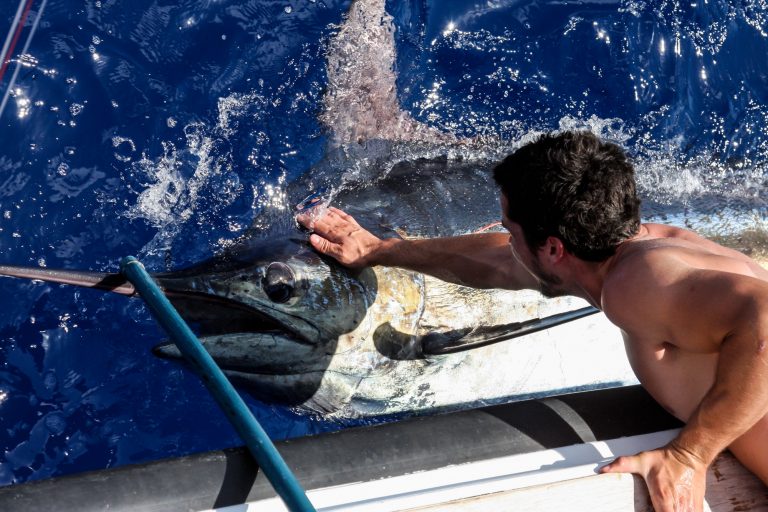 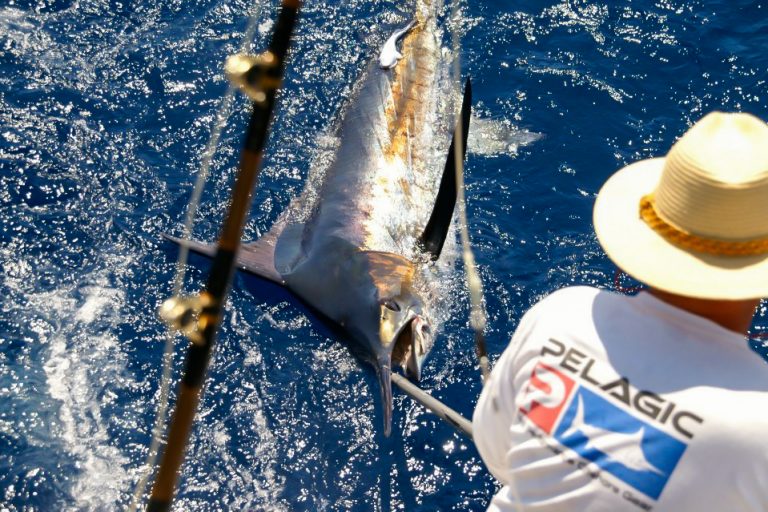 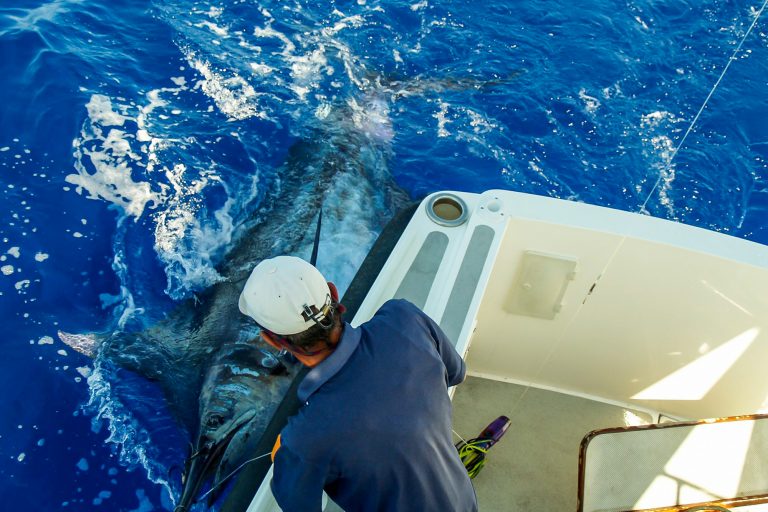 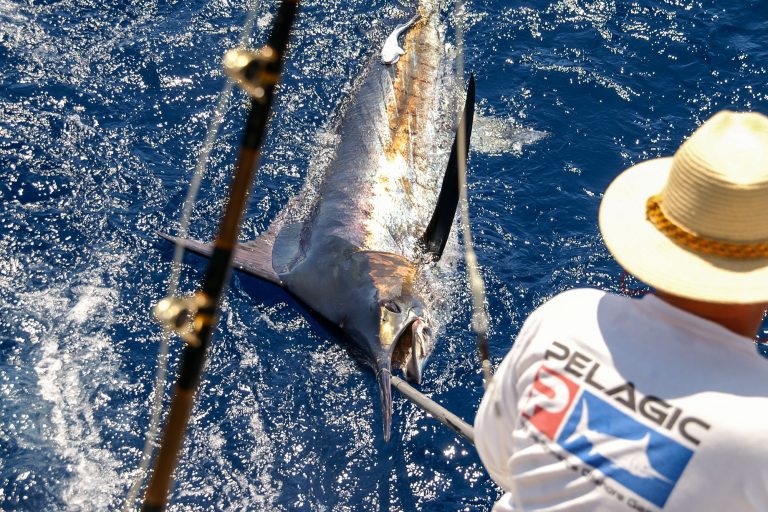 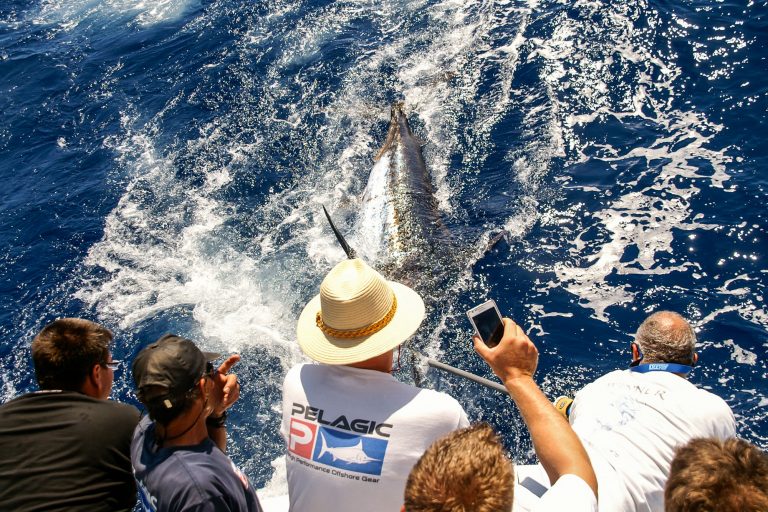 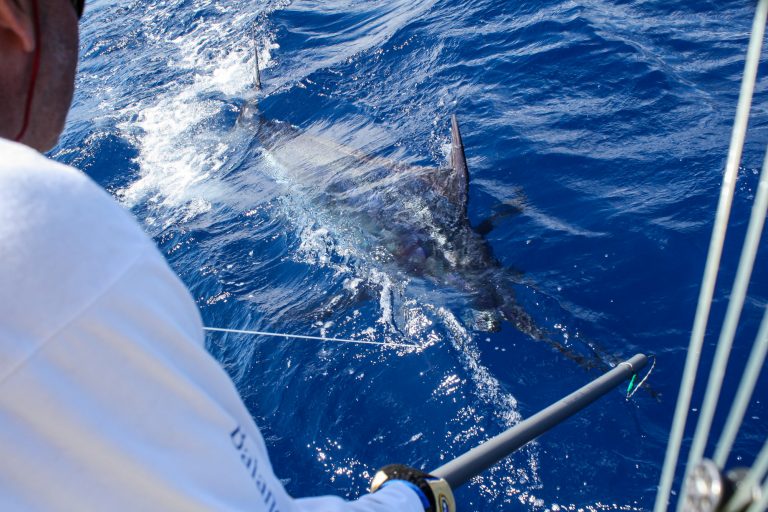 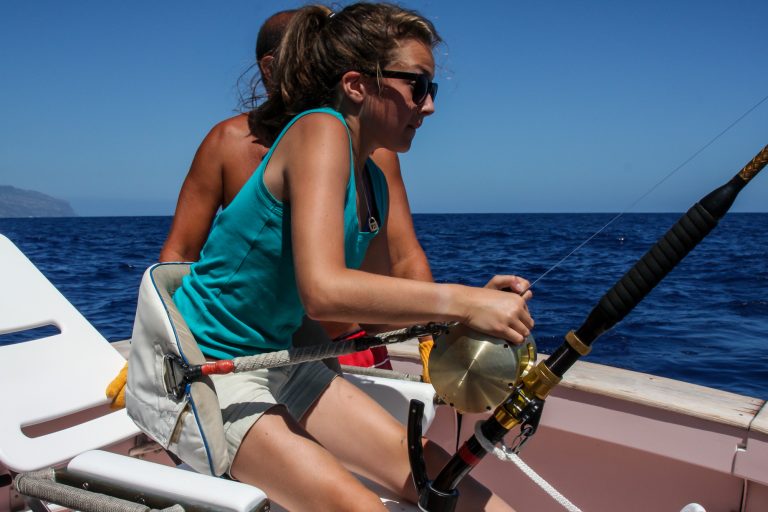 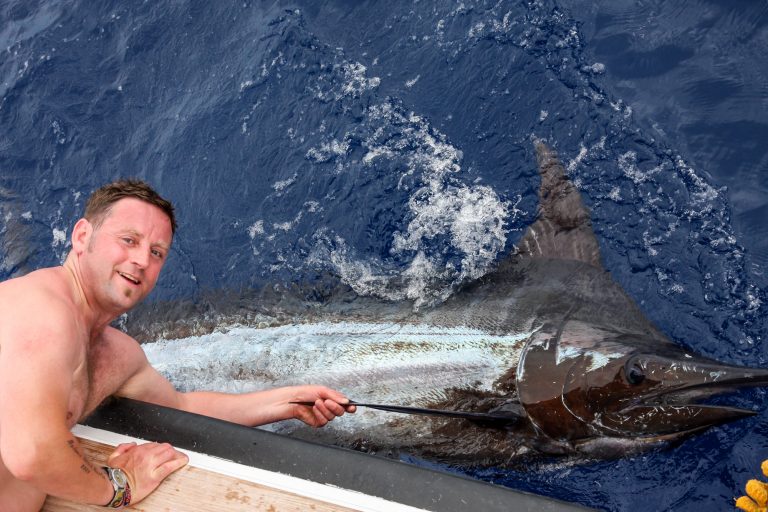 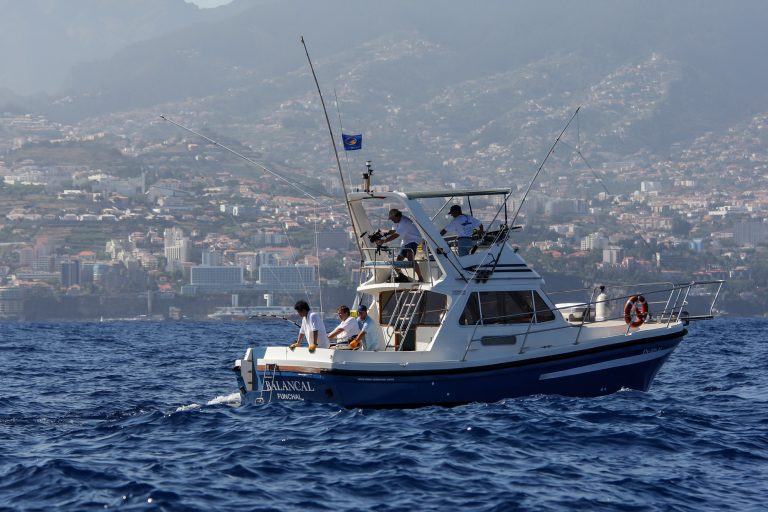