One great week was in the books and we were all very happy with the start of the season, despite its rather late nature this year. While we had to say “good-bye” to our first week’s amazing bunch of customers, we were keen on meeting our new guests for this coming week: A fairly small group would await us, which is always refreshing because you get to spend more time with each guest and it feels like you really get to know each group member along the week. 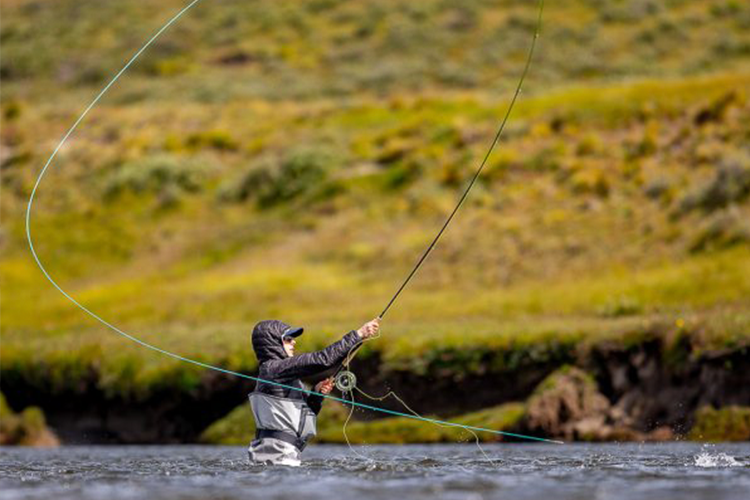 A double-handed Spey cast for some big Trout

Brian and Christina, a lovely couple out of Chicago, both who had never spey-casted before (and a fishing debut for Christina!). Fred and Chuck, two old friends who have known each other since medical school and stayed life-long fishing friends. Alex and Pat, both keen fishermen and simply overall “good-time havers”. And last but not least Santi from Nervous Waters, who joined us mid-week for a couple of good fishing days. Except for Santi, all members of this week’s group were Kau Tapen first-timers and just as they were keen to experience our pristine Sea Trout waters, we were much looking forward to invite them into our world here at Kau Tapen.

The water conditions did not change much from last week: The visibility remained clear and the water level at a stable + 5-10 cm (2-4 inches) above normal. The weather, however, did not, almost every day we experienced severe changes. If it was sunny in the morning, it could be hail-storming in the afternoon, if it was quite the first few hours, it might blow 75 km/h a couple of hours later. Strong rains on Monday night and Tuesday caused a minor rise in the Rio Grande, but pushed the Río Menéndez up a foot, rendering it dirty and unfishable for almost the entire second half of the week. 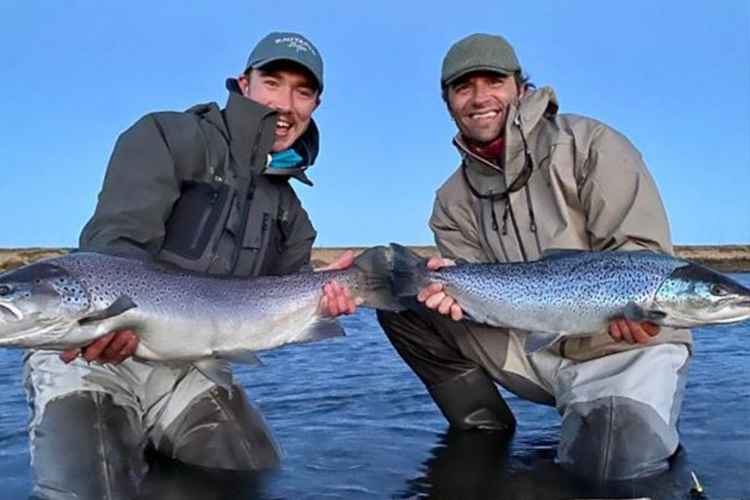 Nothing beats a double hook-up!

The fishing was still patchy. There was no clear pattern of which approaches worked best and pools could switch on and off within just hours. If one would intercept running fish, it was very possible to connect to half a dozen fish in one pool, while others did not produce a single bite. But the first full moon of the season was predicted for Monday, and the big tides that go hand in hand with it would hopefully push a lot of fish into the system. Luckily, the comfortable water level would make it easy for these fresh running fish to hopefully enter our waters relatively quickly. Unsurprisingly, our anticipation to finally intercept these fish in our beats was as great as it could be.

But despite the unpredictability of the fishing, we had a great start into this week. Although everyone was still getting their casting sorted out on Sunday, some good fish were landed during these first couple of sessions already. Brian decided to take all the pressure off his trip by landing three double-digit fish on day two, amongst them a stunning 16 and an amazing 21 lbs fish. But also Pat did not mess around for long, after losing a couple of good takes, he was able to bring in an immaculate 16 lbs buck from lower Menendez. While the Río Grande still felt slow and unpredictable, the lower pools of the Río Menéndez were already holding good amounts of fish and in the right conditions, offered some incredible fishing. Unfortunately, it blew out on Wednesday and was unfishable for the remainder of the week. 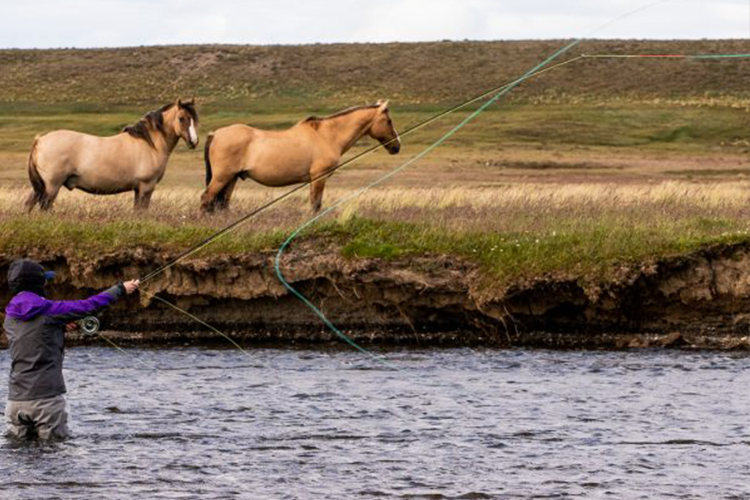 This angler has a pair of non-talkative spectators!

Tuesday was the day of the lost giants. In the morning session alone, Pat and Alex hooked into five big fish, none of which made it to the net unfortunately. They redeemed themselves the same afternoon, when they intercepted one of those schools of running fish, hooking into nine fish within just 1,5 hours and landing six of them, all of which were in superb conditions and amongst them a silver fresh 13 lbs for Alex.

Brian kept consistently delivering solid double-figure fish in almost every session, just like the stunning 18 lbs that he managed to hook on Thursday just before dusk. It took him just a few practice casts to pick up the basic principles of spey casting and by the first evening, he was already covering the water consistently. But also Christina, without any preliminary fishing (!) experience, learned incredibly quickly and was able to bring a few nice fresh fish to the net, a couple of superb ten-pounders amongst them. 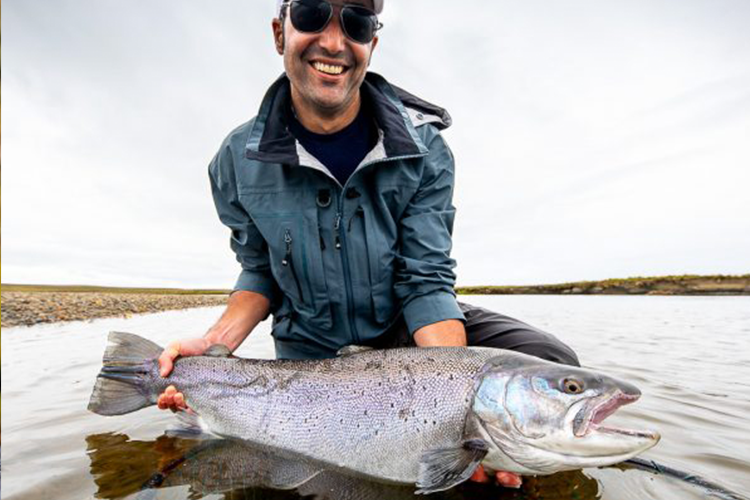 A stunning Trout, he hasn’t been out of the sea very long!

While Chuck and Fred were a bit unlucky during their first couple of fishing days, they finished strong and could both end their trip on a double-digit fish each.

Although the fishing still felt a bit inconsistent, all of our guests landed some great fish and considering the intimate size of this week’s group and the fact that most of our anglers were spey-casting beginners, we are very happy with the effort everyone put in and the final fishing results. While some days were very tough fishing with winds up to 80 km/h and hail-/rainstorms, our team in the lodge tried to go the extra mile to make the time off the water as comfortable and enjoyable as possible. Funny stories around the dining table and the bar, supported with good food and drinks, and topped off with some incredible sights of the elusive Condor hopefully added to the experience off the water. By the end of this week, we all felt like having made a bunch of new friends and that exactly is what makes this job as special and fun for us as it is.

Thanks for an outstanding week of great fun, good conversations, and of course great memories out on the water! To hopefully be repeated next season…

How many times have you heard the saying, “a thinking angler catches more fish?” It’s a saying that gets used a lot, but unfortunately, It’s not given much attention. Swinging For Kings – The Broadside...
Read More >
Stay in Touch
Sign Up To Our Newsletter
Sign up to our weekly newsletter to get the latest travel advice, offers and adventures.
Sign Up Now
Request A Brochure
Our inspiring, free brochure is packed with incredible travel inspiration from every corner of the planet.
Request Now
Submit An Enquiry
Our experienced team are always on hand to help you with any questions or advice you need.
Enquire Now