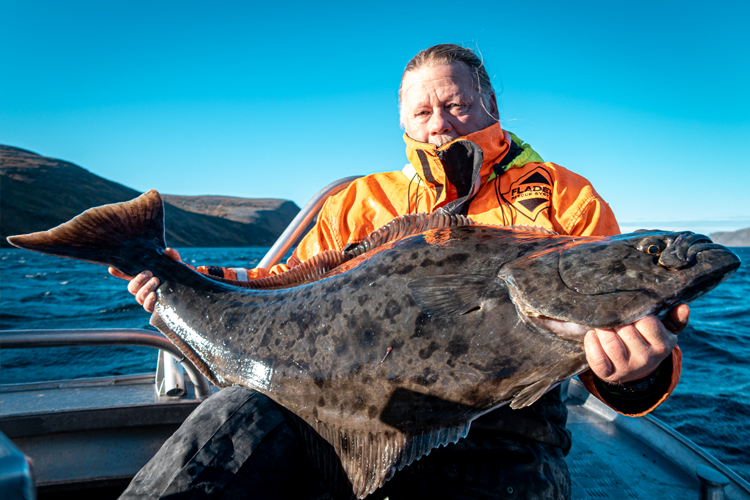 Even tho this week was presented with some unpredictable conditions when it came to the weather, the guides and anglers still managed some fantastic fishing including a massive 200cm Halibut being landed!

We have gone through a really windy week up here in the north, the weather is not something we can control and we have got to roll with the forces of nature properly. But, we have also seen the sea in its finer side and also felt the incredible power from the large Halibut that we all love!

At the beginning of the week, we were treated to a mirror-shiny sea, the first day of fishing would be a day never to forget. Most of the boats at the camp went out at sunrise; however, we were met by a really thick fog, and for some of us it did not drop at all throughout the day, but for those who chose to stay in the area closer to Havöysund, they got a brilliant day with sunshine. We went further out, and it offered really good action at first and it did not take more than a couple of minutes before Halibut began to be reported on the radio

I who drove Niklas, Ulf, Hugo and Benny in boat 12 found a good spot, and on the first drift, Ulf hooked a nice fish of 119 centimetres, we saw a few more fish come in without chopping and the drive after Ulf lands another amazing fish at 121cm! The guys in boat 5 next to us who made their first voyage to northern Norway also did not have to wait long to catch a Halibut when the first drift took one at 90cm and on the second drift thundered up an amazing fish of around 130 centimetres! At the same time, we hear how good fishing is for the other boats on another spit and boat 7 pulled a great fish of 140 centimetres! When the current subsided, I tested another spit and there it produced a better fish on Ulf’s rod again. Immediately after, Hugo was fast down and as soon as he got down to the bottom, it produced up a really big Halibut that swallowed his baitfish, he hooked it and got to feel a real fish on the rod.

During the second day we stayed closer to the camp due to the wind, I steered boat 5 and we went with a bunch of boats to a really nice place where we could fish efficiently throughout the day. Already on the first drift when we drove out at 60 meters, Niklas hooked up to real fish that offered a good fight and produced some lactic acid in his arms, but he had not intended to fold down and his father Ulf could secure a real beast for Niklas at a nice 139 centimetres! Hugo in boat 12 would also land his first for the trip of 103 centimetres this day, which was really fun! In boat 5 we found a good spot where we got a couple of smaller Halibut of 85cm, and after going out into deep water and pulling a couple of nice Cod, we returned to the spit and managed to pull two more Halibut at 108 and 122 centimetres.

The next day quite strong winds were promised again, however, it turned out to be a nice day and the strong wind never came. We had sluggish fishing in many places but some managed to thunder up a bunch of nice fish where the top fish this day were 149, 165 and 170 centimetres! This was very fun as the next two days after this were completely blown away and we had to spend the time on land, waiting for the last day to be able to come out again finally.

So the last day came and we were ready like never before, we were a little unsure of what opportunities we would have in the morning when the southerly winds fell hard into the harbour at 06:00 in the morning when we were ready on the pier. But we went out and headed up to a really big fish area where we could finally fish all day nicely, but with a lot of wind. The fish bit well in the beginning and a bunch of fish came up between the boats up to 130 centimetres, but when the sinking tide stopped we got a bunch of sluggish hours as a result. It would not do much when we finally got some good wind again and Benny in my boat finally got hooked in his first Halibut for the trip and landed a new nice PB of 126 centimetres.

The boys in boat 10 had scouted out a spot, and when there were only two boats left in the strait in the afternoon, boat 10 shouts out that they were teasing fish. Time passed and after a while I realized that it was true and had produced some good fish, Biffen had had to work hard to land a fish in deep water and after five measurements to be 100% accurate, they informed me that the fish measured in at a wonderful 200 centimetres. This was fantastic end to the week, we have fought to be able to fish as much as possible, despite the strong wind, and in the end it paid off really well. Andreas, after landing Cod in the morning, he went in and tested a new bay where he found a really good number of Halibut with a top of a nice 138 centimetres!

Now we are recharging for another week and we have recharged to 1000!
Tight Lines // Douglas Dahlberg & Andreas Hugsén