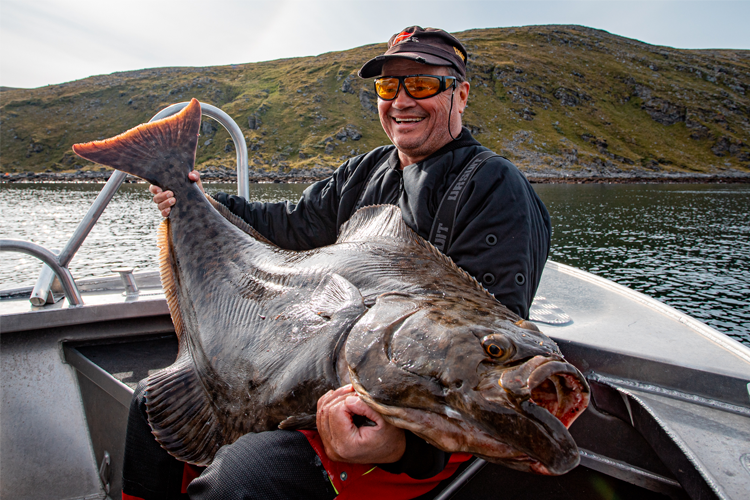 What a start to a week this was! Not only did the guys get straight out on the water after the briefing, but they also managed to hook some amazing fish in the process!

It was a new week, with new opportunities! The guests came up in the usual form, excitement to a thousand. The weather was great the first night so some of our guests threw themselves into the boats right after the info meeting. Today, the guests came to Havöysund so it was radiant sun and winds up to just under 3 m / s. Our German guests went out to fish for Halibut. Unfortunately, it was a short visit to the sea as it gets dark at night now. However, they took advantage of the little time they had out at sea in a maximum way, they went to a place in the immediate area and there it would turn out to be just right. Even after 10 minutes of fishing, Mathias stops in boat 2, he does not immediately realize that it was fish as it was just very heavy without any movements. After pumping for a while, it swings properly in the rod and he realizes that it is a fat Halibut, the fish comes all the way up to the boat and when everyone sees the fish, they are shocked. The fish turns and pulls a brutal rush, Mathias with his lighter spinning rod and a reel of model slightly smaller did not have as much line so they had to accelerate after the fish with the boat until the fish stopped. The fight continued well for a long time on the light rod, but in the end, he managed to get the fish to the surface once again, the gang in the boat filmed with their mobile phones when the fish is on the surface and it manages to stick right under the boat so that the line explodes, a shame and a brutal start to the week, the gang estimated the fish to be between 190-200 centimetres, and after showing the film to me and I could well see the whole fish for a while in the surface.

During the first fishing day, the starts were set at 06:00. The feeling was special when you went down to the boat, felt like such a day it would just happen, that one of the boats would see a really fat Halibut. The guide boat with 6 other boats went together to an area that we know holds really big fish, the currents were perfect and also the weather on them. It would not be long before boat 8 hooks on a fish, and it was not just a fish, it was the fish we all dream of… It was completely sick that boats 7 and 8 who fished together before the trip had talked so much about this area and were more or less determined that they would fish there almost every day to have a chance to go in a real toad. But to then get up, go there the first day and go in that fish type right away, it’s just so crazy! Anyway, the fish was heavy and there was no doubt about the size of the fish, the fight had a happy ending and on the mirror shiny sea, the guys in boat 8 could measure the incredible fish to 210 centimeters! BIG mega congratulations boys and nicely fished. After a few pictures and one last look, of course, as usual, the fish regained its freedom and swam back. The fishing is undeniably really sick up here sometimes and when you find the right one and they are hungry, it rarely comes up just a big… Boat 9 who was also in the area also went in their first Halibut for the week, which wonderfully also showed be a real bang fish that measured brutal 195 centimeters who also, as always, got the freedom again and swam home. Sick congratulations even there, what a start. Boat 9 also landed a nice fish of 140 centimeters, but the thing was that some of our Danish guests were fishing in a completely different area, which turned out to work as well. Without too much info about how the fishing was in addition to the fish they caught, they were very happy to tell about two really nice top fish of 160 and 149 centimeters!

Unfortunately, our Friday went ashore when it blew really hard from the west. It is always just as sad when you are forced to sit on land, but unfortunately it is external factors we can not influence that control us, gratifyingly, the winds were more manageable on Saturday and I could get my armada out on some good Halibut fishing in the area. Despite continued strong winds and generally messy conditions, we got really good drifts in the chosen somewhat protected area, there is not much to say except that between the boats we managed to poke up around 7 Halibut between 90-118 centimeters. However, there was a boat that went in a better and it was again boat 8 that pounded a royal Halibut of 156 centimeters in the final stages of the day, and to succeed with this in tough conditions is always a feat and an absolutely fantastic feeling.

Sunday promised really nice weather conditions, and with the conditions and investments during the first days, not much fish had landed between the boats, so everyone was tagged on action and then also be able to get some fish in the boxes. I steered out with our Dutch guests at 05:00 followed by boats 7 and 8, we pulled the course down to areas that at this time of year usually have a stable amount of fishing and with that there was a lot of spin fishing on the schedule for the day. Once there after a quiet hour of travel, I pulled away my first cast for the day and hooked in a messy fish immediately, while I teased this, we first hooked one on bait fish that we dropped, then another that started to pull down the handle before it came loose, but it was not enough but then we hook a fourth that also sat at the beginning but then the line goes OFF! … This we saw then was due. A broken loop on rod, but oh my god we hit really right right away and my fish was landed oh was around 125 centimeters. We continued to dust fish and have a lot of contacts on the small spit, and after 5 quickly landed fish we moved to the next bay which had a little flatter water as the swells were not so appreciated by everyone in the boat. Later around lunch time we moved to a completely different area for fun, and also to maybe get in touch with a bigger play. The mass fishing was still really good but they were very picky and we had many many bites and catches before we actually managed to land the fish, however really fun. When we felt ready in my boat with the small fish, we lay down in a place I know is a little tougher but holds big fish, the guide boat accompanied us and Marek who made his first trip with us here tied up a nice PB of 134 centimeters quite immediately. We wore on and during the third drift it creaks in my reel, I wait a bit before I turn the circle hook in the fish and once it sat and I felt it was a stable fish, I passed over the rod. The fish fought really well and did one rush after another, but unfortunately it did not have the brutal weight to be able to last that long, so after a couple of minutes I was able to land the day’s largest at 154 centimeters, really fun!

Monday actually offered really good weather until 15:00 so we thought the day would be after that, we drove in areas where we normally have really stable Halibut fishing, but unfortunately the whole day was sick tough and almost no boat got anything more than a few single Halibut of up to 120 centimeters. When hard wine arrived at the ether dinner we started to search in bays and there we found the fish in the guide boat, Sven-Gunnar pounded up a meter of fish that was warmly welcome and far from the first or largest fish he ever caught, but that fish did in inside the next bay, the one on the other hand was the biggest he ever was in… The day was coming to an end and I fought some last drives, we knew that tomorrow would be even worse so we ate. On this day, boats 7 and 8 took the opportunity to return to the area that delivered the giants at the beginning of the week, and they do not regret it. Boat 8 which was hot as iron stoves this week pulled another really fat fish of 175 centimeters, boat 7 which was still waiting for its mega Halibut continued to rub on and they knew the fish was there, but when would it chop… After a number of hours so it finally happened and they had a really big fish on the hook, there was no doubt that the fish was big but when it decided to start sneaking away at its heavy lukewarm pace, something happens that must not happen to them either, the line slams off !!… Absolutely incredible…

As I said, the last day was really windy and the fishing had to be conducted again in the immediate area, there was not much to talk about but at 08:00 some boats stuck out and I had suggested a place that would work nicely on the rising tide when current and wind would go in the same direction. The Dutch went all in on that idea and already the first drift after a couple of minutes they were tight on a fat Halibut… In fat swells and torrential rain they stood , up from the 25 meter deep water came another nice 150+ Halibut and they measured it to 155 centimeters. Their day continued well despite the increasing wind and they pulled another one of 132cm and one of 110 centimeters, 300 grams Sandy Andy is superior their fav bait you could say. The crazy thing was that they found a spot where they got a couple of Sandskäddor on the jig, and sometimes they got a fish that looked completely different. This turned out to be a mountain Dab of 500 grams, really cool. The Germans in boats 2 and 10 also had a cruel day in the tough conditions and pounded Halibut of 134cm, 125cm, 95cm and even one under 80.

Now we start getting ready for next week and more fat fish !!! We will have a war in shitty weather the first days of the week as it looks, but oh my god it does not stop us from burning fat up here in Kveiten’s kingdom Havöysund!