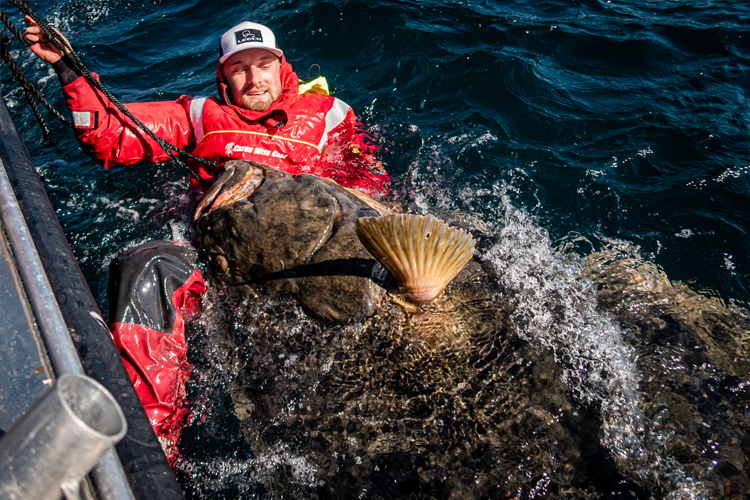 All we can say about this week is wow. We knew that we were all expecting Havøysund to throw up a big fish, but not a 221cm Halibut within the first few days of being open!

We are FINALLY up and running again up here in Havöysund! It feels absolutely fantastic to see all the happy guests again, we have for a week now talked memories and stories in the euphoric atmosphere that has been at the camp. But above all, we have been out and created new ones!

We initially had a good forecast for the week with a little more wind at first, this unfortunately changed for the worse and the weather has been very variable and unpredictable throughout the week. Anyway, of course we were out and dipped the gear in the sea on the first night when we arrived at the camp, there was not much to think about in the guide boat as it was halibut that was on the wish list for the boys so it was just to go out and start fishing. In fact, we had sometimes really sluggish fishing the first few days and the Halibut were really hard to tempt and we tested everything we could think of based on what the weather allowed. There was some Halibut still in the beginning, nothing amazing but among other things some good fish of 130-140 centimetres between the food fish.

During the third day of fishing, we finally started to get a little better current in the sea, which meant that we immediately got a little more action on Halibut fishing. Mats and Inge who were drifting off a nice stream edge managed to lure up a nice food fish of 114 centimeters and got the hope, they put up a couple of new drifts on the same edge and finally they managed to pry up a really heavy fish of 150 centimeters which also became a new wonderful PB for Mats. We in the Guide boat tested a spot on the rising tide current that usually holds a lot of fish and was very true , we threw jigs on our rods and started fishing actively as just that and cranking like crazy, then it did not take long before the first Halibut of a very small size was closely followed by a small fish of 77cm which Ivar kindly passed over to his son Lucas who got to feel the fish. The drift after, we just hoped that it would continue and we got an answer when Thomas and Anders suddenly stand with each bent rod and I have to shout that it is two nice Halibut! Absolutely fantastic to be able to end that day with a nice double hook up with a 100cm to Thomas and a 93cm to Anders who was also the first of his life.

Saturday would offer a really windy story, but the boys had wanted an attempt at Plaice during the week so I thought I would try to solve this. During the rapidly increasing westerly wind during the day, I had a nice place that would at least work in the morning, so we burned there with our shrimp and potternosster tackle and started dragging. It did not take long before Ivar pulled the first plaice,the fish’s tail fin had been bitten off by something, the Dutch in boat 12 lay and tested Halibut next to us and pulled up a 100cm after just a few minutes. After a while Ivar was running again but this time with something stable that turned out to be a nice Plaice of 59cm and 2-2.5 kilos somewhere, unclear why we did not weigh it. But after we regularly pulled some nice Plaice with, among others, Lucas at 51cm and 1.7 kilos, Gert was ready to make an entrance… In the strong wind I was busy keeping the boat in position, but finally for I see how Gert hooks into something SIGNIFICANTLY heavier on the light vertical rod and I realize pretty quickly that it is a fat Plaice! Of course, the net remained in the harbor, which was perhaps lucky because this Plaice would have probably not found a place in it, when the Plaice breaks the surface I manage to lift the fish in like a small infant and we immediately see that it is a cannon fish! Gert with a previous PB of 1.7kg did not have to reflect so much on whether it was PB because he had now doubled with this absolutely fantastic plaice of 64cm and 3.3 kilos!

What happened next was that we had to go home at lunch and stop fishing for the rest of the day when the wind pulled on too much to be able to fish… but the nice thing was that the night and the following day looked magical, so it was just to go home and tell everyone at the camp to go to bed so we could go out on a long trip at 12 at night, no one banged and everyone was super tagged. So 00:00 we went out on a mirror-shiny sea under a fantastic midnight sun. It was something magical that hung in the air and after driving 1.5 hours we were finally in place on untouched ground, the fishing was a bit difficult even there at first but after a while it started to come loose and Gert in the G-boat hooked in a nice fish but unfortunately the fish came off… we fought on and Boråsarna in boats 3 and 7 managed to poke up a couple of food fish of around 90 centimeters. There was a lot of nice food Cod of 5-8 kilos on the advice and in the middle of the Cod something Lucas takes bait fish carefully and comes off after a few seconds, we wondered if it was Cod or Halibut, but when the fish for the THIRD time takes the bait fish and gives Lucas had a chance to hook it, Lucas had not planned to give the fish any room for contagion, the circle hook got a foothold and finally Lucas had a nice fish! With hard pressure, Lucas pulled up the fish and we were able to land the first Halibut of his life at 138 centimeters!

When the fishing went quiet for us, I decided to fish a couple of other places and after rubbing for a while and fishing for almost 12 hours, the current started and it felt really hot again! We were in the last area for the pass and it was like now it was time to put an end and go home. We dragged our bait fish along an edge that is not unknown to hold large fish and after I let my saithe down to the bottom and started to crank it up slowly, it stops the stuff and I start to give a little line, just after cranks I stuck the circle hook in something really really heavy and it did not take long before I realized that it was a really serious Halibut that was sitting on my hook. The fish was anything but kind and with a bit messy conditions, it was easier said than done to position the boat and hold it at an angle where it was possible to lift the fish, a turn at the boat edge with a failed landing and the fish was down again at the bottom and took rush on rush. Despite lactic acid and a sore back, this was what I personally waited for 11 years and after 20 minutes the fish was finally at the boat’s edge… Undoubtedly a euphoric feeling to land this dream fish of 221cm with an estimated weight of 148 kilos, and all in the boat was carpeted after this experience so after seeing the fantastic fish swim home again we went to port.

During the last day of fishing, the weather was finally really good during the day and we were able to end the week by going to an area that keeps extreme amounts of Halibut, it was much needed after a generally sluggish week. Not all boats wanted to join this long trip but the G-boat and boat 8 left and they were very happy about it! Right from the start the fish hit but they ran mostly angling in the beginning and the fish did not really want to swallow and they missed 7 fish within the first 15 minutes of fishing in the G-boat… but in the end Lucas put on a jig it took no more than one couple of minutes before it really smacked! After a messy fight, Lucas lands his second Halibut for the trip at a full 140 centimeters and increased his PB by 2 centimeters more. After this, the fishing took off and there was a good cut on the fish where there were more fish over 140 and the G-boat had over two digitally landed fish with 6 fish over 130 centimeters. Boat 8 succeeded and really well when they finally connected to the relatively small area where the fish stood. It is tricky sometimes when they are really concentrated in certain places, then it wants to fish near the product because if you find such spots, there are fish so there is enough and it is over to everyone!

We want to thank all the wonderful guests for a fantastic first week and now we are recharging for a new week in paradise!