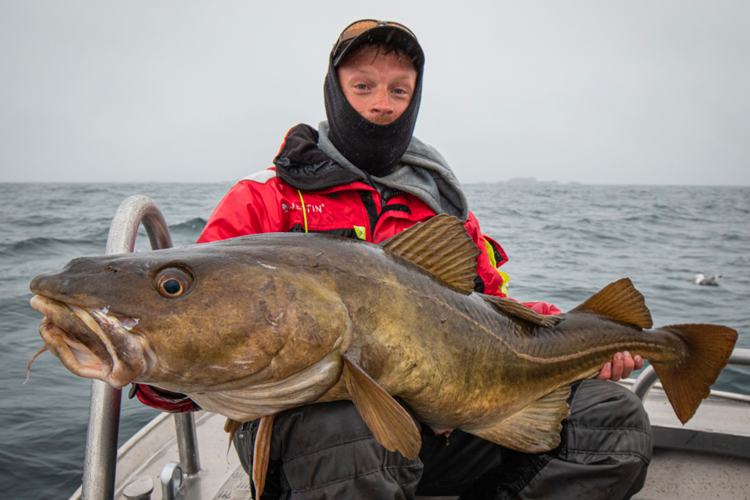 What a week this has been out in Vesterlen, even tho the guys were limited on some days due to the weather conditions, they managed some absolutely insane fish and experiences never the less!

30kg+ Cod and a meeting with killer whales!

Another week comes to an end over here at Vesterålen, and what a week it has been! Wednesday last week the new gang came to our camp here, and everyone was geared to a thousand! In Robert’s gang, 7 out of 9 were first-time travellers to northern Norway on a fishing holiday. To put it mildly, expectations were high, and the morale was great when the weather turned out to let us get out to sea properly in the next few days. The guys in the Guide boat arrived at the camp early in the day, and had a little trip in the middle of the day already. They took a trip straight out into the fjord to fish for some pike, and they succeed well! They got several nice Pollack up to 4 kilos right outside the camp here!

But on Thursday we were finally to go out as a united troop. Boats 5 and 6 wanted to spend the day fishing for Cod, while in the Guide boat they wanted to target Halibut in the local area. The wind had not completely died yet after last week’s muddy weather. But you could at least get out. We started with a good contact in the first drift, but after that it became pretty quiet for the next few hours. It was raining, windy and relatively sour. So we decided to give it a rest instead. We heard on the radio that all the boats had a nice fishing just some distance further south of us. So we snuck into their area, and only minutes later, we hear on the radio that there is something gigantic in boat 6. Marcus, who was on his first fishing trip up here, had hooked the Cod of a lifetime. We were a little excited in the boat, waiting to hear what came up. “147 cm” we heard on the radio, and it was immediately apparent that this was a giant cod. We continued fishing and went on with some nice Cod up to 10 kilos, and several nice haddock in the 2-3 kilo class. It was a nice end to the day, but we were probably most excited to see what this Cod finally weighed when we came ashore. The head was huge on this Cod, and when they weighed the Cod, the weight showed 31 kilos! An insanely large summer Cod!

The next few days there were quite sour winds from the west, and it rained continuously. But luckily, you could get out a bit. It was good with Cod relatively close to the camp, and they were a very nice size! The boys in boats 5 and 6 caught several Cod up to 15 kilos, with another nice top fish of 18 kilos! We continued to try for the Halibut, but they turned out to be rather unwilling to bite… Only a few simple contacts. Fortunately, there are plenty of other fish to enjoy in the area, and we always leave a few hours after the Cod at the end of the day. Håkon drove the guide boat on Sunday, and then Tom got a Halibut already in the first drift. This was only 60 cm, but it was an indication that there was life in the area, and only minutes later Tom hooks in another Halibut! This was good much bigger, and started a really good fight. When Håkon is about to land the fish, it quickly sticks under the boat, and the line goes straight into the keel of the boat, and the line snaps… This is what happens, and they estimated the fish to be around 120 cm. After that it was rather tough, and Håkon decided to take the Guide boat further out to fight some big Coalfish. It did not take long before the echo sounder filled up. Soon it howled in all the reels, and all the rods were bent down into the water. Now the victory race was underway, and everyone in the boat had their personal records on Coalfish broken. William pulled the biggest Coalfish of the day at 14.5 kilos! But on average, most Coalfish were between 12 and 14 kilos. Also worth mentioning that under the Coalfish, there were fat Cod in the 10 kilo class that were more than happy to take the jig if you were not fast enough! A great end to this day.

On Monday we were going further afield to test some new places, and we left all three boats. On the way we were going to pick up the baitfish, but suddenly found out that this lonely peak in no man’s land, housed coarse Pike! Thomas fished with a jig, and got a solid double with a 4 kilo Pike and a real top fish of 6.5! We fished a little further on the Pollack, and got more fish in the 4 kilo class. A good start. We came to this new area and were going to try our hand at Halibut. Here the power was very good, and it all seemed very hot. But as Halibut fishing can be, it was rather tough. We had a proper contact , but no more than that. When the power started, the whole mark was filled with very fine Cod and Coalfish, so the focus shifted a bit to that. After driving for several hours, we were to move a little further towards the camp again. But then boat 5 shouts that they have a herd of killer whales in front of the boat. We set course for them, and the next hour we are kept in the company of a group of killer whales while we eat our lunch. It was really beautiful to look at. The smaller killer whales were playful, and jumped around the boats, and swam under us. At one point, the largest alpha male comes swimming towards us at good speed, and swims under the boat. This was really an unusual sight .. After a nice lunch break with these, we drove a little further south. We were to continue Halibut fishing, but it was almost sometimes impossible to find a gutter or sandbank that did not house quantities of Cod. We had a solid Halibut contact in a 30 meter sand channel, but otherwise it was not great after a long day at sea.

We drove home after a very nice, but rather slow fishing day. As we are only 10 minutes away from the camp, there are 6-7 boats gathered in a pocket by the fjord. We became curious about what was going on there, and drove away. When we get away, we immediately see that we are talking about killer whales again! A completely different flock, and this one is much bigger! Here we were talking about 40-50 pieces in a small area. It was an incredibly hefty experience, where we got several killer whales that followed the engine current of the boat, and jumped next to us. You could almost touch them! We had them around the boat for at least 1 hour, before we said we were happy with today’s wild safari where we saw a total of around 60 killer whales in one day. When the Halibut shone with its absence, at least the killer whales saved the day. It was a very nice end to the whole week for every man all. The same day we also had our German guests who arrived at the camp, and they had put a passport on Uer not far from the camp. They had got several nice Redfish, and the largest at 3 kilos which is an excellent food fish.

Now the guests have left the camp, and the new guests are on their way. The first days look tough… But it will turn this weekend! There is an incredible amount of fishing out there at the moment. The Coalfish and Cod are in large numbers now, so we are really looking forward to getting out there again. Would like to thank the guests of the week for an incredibly enjoyable week with lots of laughter and good fishing. Hope to see you again!