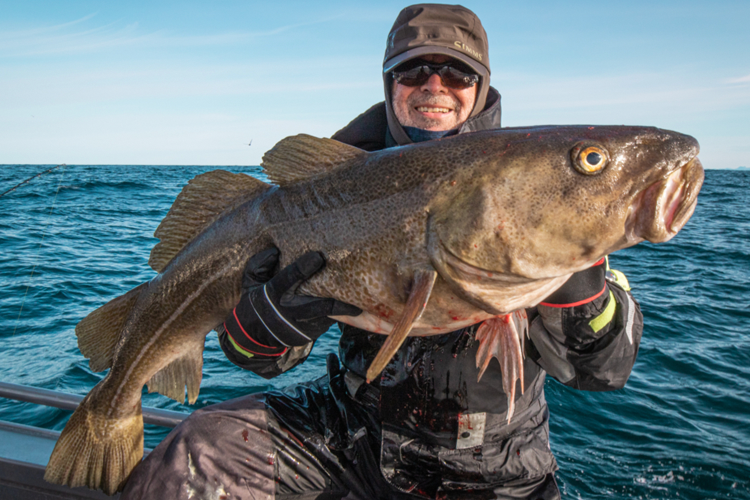 A Long Trip Before The Storm – Vesterålen Fishing Report

Over the last week, the weather across the whole of Norway has been stormy in parts and very unpredictable, but our boats and guides have managed to find a weather window and, more importantly, some fish!

In Vesterålen over the last three days, we have virtually been confined to the cabins, with some powerful winds and rough seas. However, as often the case, the ‘calm before the storm’ a few days earlier saw us out in some favourable conditions, enjoying some great action.

In the Guide boat this week, I was joined by Frank and Enrico from Germany, who were enjoying their very first fishing trip to Norway!

On the first fishing day last week, with the weather ok and the storm on the horizon, we made the easy decision to head far offshore to a famous mark that’s usually relatively kind to us.

After a journey of around 1.5 hours, we arrived at the mark, and it didn’t take long to get into some nice fish – as usual, the Coalfish were thick on the Sonar. Last week we’d fished the same area with light tackle for the Cod, so I advised the anglers to do this again – for maximum enjoyment. Fishing just 150gram jigs, Frank slammed into a lovely fish of 18kg, and Enrico followed with one around 12kg. The action continued for a decent time before we decided to try something a little different. We moved into a depth of 80m of water and sent some dead baits to the bottom searching for a Ling – once again, it didn’t take long before we were all hooked up!

Enrico landed a cracker of 21.5kg, I managed one of 21kg, and Frank was also in on the action with one just over 18kg. It was insane fishing! I even tried a 3kg Coalfish bait for a Halibut, but the Ling were still first on it!

We tried more Halibut fishing for the last part of the day, but we didn’t manage a hook-up, it was a bit disappointing, but the numerous 15kg+ Cod we caught softened the blow!

After a ‘short’ long trip, the guys still went home happy with the day’s results.

The following day was quite windy, and we focused on an area close to camp in search of Plaice – we got some small, super fun Halibut, but the spotties were missing!

By the next day, the wind had luckily calmed down, and we were able to head west in search of Halibut; it turned out to be an actioned packed day with plenty of hook-ups. Whilst drifting for Halibut, we also set up a couple of Plaice rods to compensate for the previous day’s failings. It turned out to be a good idea, as Frank immediately landed two around the 50cm mark. However, it wasn’t just the Plaice that wanted to sample our shrimp bait offerings, as we enjoyed some fantastic sport with some small Halibut too.

When the tide turned, the larger Halibut switched on, and Enrico landed his first-ever, a fish of 83cm, and after a great fight, I also added one of 150cm.

On the final day, before the storm arrived, we again ventured west, searching for Halibut. Unfortunately, it turned out to be a frustrating day, which reminds us why it’s called fishing and not catching! We did, however, land some small Halibut and lost a couple of really nice ones. Fishing a sandbank in around 45m of water, Frank lost a mighty fish, and so did I; after 3 to 4 powerful headshakes, the fish managed to shed the hooks.

To ease the pain of the Halibut losses, we ventured slightly further offshore, looking for Coalfish, ending the day with a bunch of nice fish to around 8-9kg on light tackle – this was the last action of the week as, unfortunately, the storm hit and kept us on dry land.

We’re a few days on now, and finally, the storm is about to subside. The wave height is around 5 to 6m, so it will take a few days before the sea flattens off, but fingers crossed we can get out properly next week – the forecast is undoubtedly looking a lot more settled.

As we head towards the last few weeks of the season, you can certainly feel and notice autumn and winter are well on the way. It’s much darker in the evenings, and the northern lights have finally arrived – a beautiful sight I will never get bored of witnessing.

The fishing should be great out there now, so fingers crossed we can get out in the next few days – stay tuned!

We do still have the odd week available for the 2021 season at Vesterålen. If you would like to join us at the famous Northern Norway destination call us on 01603 407596 or email us info@sportquestholidays.com.