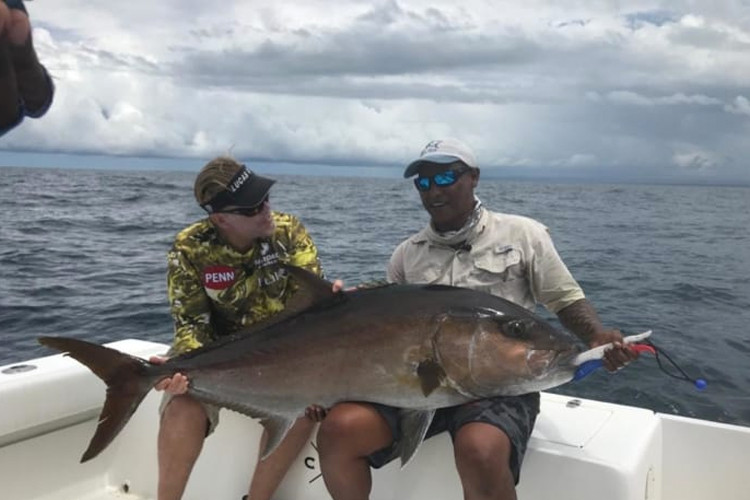 We have come to the end of another month down at Crocodile Bay in Costa Rica. This month saw a fantastic head of fish and even managed to produce a colossal Amberjack, as well as a new all-tackle record Colorado Snapper. The guides have very high hopes for the next month to produce even more amazing fish.

This September carried some amazing weather where our anglers took pleasure in fishing calm waters with beautiful tropical skies. September is usually known as a great month for anglers to target the larger roosterfish and Cubera Snapper. We had anglers who were able to catch their “trophy fish” after years of fishing for those 60-plus-pound roosters, along with the big Cubera Snapper; two species which are amongst that dream catch for our bottom fishing anglers. We have also seen a few 40+ pounders this month, which was definitely breathtaking!

One great aspect about our inshore fishery is that the sheer diversity of species provides our anglers a high probability of a catch that will make for a savory dinner! Our chefs at Crocodile Bay Resort prepare your catch with authentic, tropical Costa Rican flavors. I can guarantee this ocean-to-table dining experience here in paradise will not disappoint you.

The Marlin and Sailfish action tapered off a bit and gave rise to other species. In the last 3 weeks the Yellowfin Tuna action has been just phenomenal!  Our anglers bumped into different schools of porpoises with some considerable size tuna (weighing in over 60 pounds in the mix) giving them that fight of a lifetime and a dinner that allowed them to savor their day. The action has been relatively close to shore, anywhere around 5 to 15 miles, giving our inshore anglers the chance to bag a few Tuna as well.

The last two years the Dorado have been absent during September, but this year the Dorado season got off to a fantastic start! One of our long-term anglers and Botánika owner, Javier Rodriguez, and his son were able to come across a huge school of Dorado and landed a few nice size bulls to bring in for dinner. It appears we may be going back to the normal Dorado season now. If you have not had the opportunity, you should experience a freshly caught and cooked Dorado filet – it is one of the tastiest tropical fish!

We can’t forget to mention a couple highlights from this month. We had a visit from Mark filming another episode of BigWater Adventures at Crocodile Bay Resort. BigWater Adventures is an action-packed fishing/destination program on television hosted by Mark who frequently visits the resort.  This time he teamed up with Sharly Oporta as his co-host and mate, with German as the captain. They formed such an incredible fishing team. Since the fish were not really going for our live bait, Mark wanted to bottom-fish with jigs and landed a 100 plus pound amberjack. This is definitely going to be a huge highlight for their upcoming episode.

Also, this past month we had the privilege to host Ryan and Tera Haseman while they were celebrating their honeymoon at Crocodile Bay Resort. I can tell you guys it was a perfect match! Tera has a deep passion for fishing, and the couple landed a variety of species. But the highlight of their trip was fishing with Captain Anthony for roosterfish inshore, and they landed a double hook up of two beautiful size roosters. All were hooked and landed by them; at the same time – you guys can already imagine the feeling! We look forward to seeing them again in a few months.

Another highlight of the month was to witness one of our repeat anglers, Mr. Fleming, as he hooked and landed a 25.5 pound Colorado Snapper. This will be IGFA certified as a new all tackle record. I would also like to mention that the previous record was also caught here at Crocodile Bay Resort!

I can’t wait to see what October has to offer, but it is already looking promising judging by all the bait the dolphins and tuna are feeding on. I believe we are in store for a great month ahead! So, let’s get away from the arctic blasts up North and head on down to enjoy the light tropical breeze on the waters here in paradise! I look forward to seeing you soon.

Crocodile Bay Resort really is a destination that keeps anglers coming back year after year, catering to both anglers and holiday-makers. If the sound of this report has got you interested in taking a trip to Crocodile Bay yourselfd, you can find further information about this tour on our Crocodile Bay Resort page for even more info including dates, prices and more detailed trip information.